Osteoarthritis (OA) is a leading cause of chronic disability and pain with an estimated nearly 9.6% of men and 18% of women over the age of 60 across the world suffering from OA [1][2]. Current conservative management consisting of non-steroid anti-inflammatory drugs (NSAIDs), intra-articular glucocorticoid injections, physical therapy, and more are often unsatisfactory. Currently there are no drugs that directly treat the disease to prevent the pathologic progression to its end stage, to which the only treatment is total knee arthroplasty (TKA). Due to the lack of curative therapy, TKA had its utilization rates more than double from 1999 to 2008 [3]. Most importantly, an estimated nearly more than $27 billion in healthcare costs annually can be attributed to knee OA [4][5][6]. Given such large healthcare expenditures and current inadequate multimodal treatment regimens, developing novel non-surgical or minimally invasive therapeutics is critical.

One growing area of research regarding alternative methods for treating OA has been focused on the use of mesenchymal stem cells (MSCs) due to their ability to proliferate and differentiate into other cell lineages, thereby potentially regenerating cartilage, bone, and other structures [7][8]. MSCs have been shown both in vivo and in vitro to play an important role in protecting against the development of OA or articular cartilage destruction via anti-apoptotic activity, anti-fibrotic activity, promoting chondrogenesis, immunosuppression, regulating metabolic activity, and more [9]. Contrary to conventional thoughts, further investigations with MSCs showed that many of its beneficial effects in OA likely involve paracrine signaling, of which one is via the release of extracellular vesicles (EVs) [10][11]. A subtype of these EVs are exosomes, 30-150 nm diameter particles secreted from cells for intercellular communication that carry proteins, lipids, nucleic acids (including mRNAs and microRNAs (miRNA)), and more [12]. As such, many investigations are currently in progress to better understand the roles and mechanisms by which exosomes function and the potential for them to be used clinically in OA and other pathologies.

There are multiple advantages and properties of exosomes compared to MSCs that improve the likelihood of them being translated clinically and thus the recent rapid rise in the amount of literature about them. For example, given the small size and hypoimmunogenic nature of exosomes, there is a lower likelihood of rejection [13][14]. Additionally, as exosomes are non-viable, lower costs are involved in their maintenance and storage relative to MSCs, as cells need to be maintained in a viable state [13][14]. Furthermore, exosomes have the ability to cross the blood-brain barrier, opening the possibility for any therapies targeting the central nervous system or for future use as drug-delivery vehicles [15].

2. Exosomes Derived from Non-Classic Sources for Treatment of Osteoarthritis

Given that the knee joint is lined by a thin layer of synovial membrane, the function and downstream effects of EVs produced by the synovial membrane on nearby structures have been of keen interest. Several recent in vivo studies have shown promising results, with all having a relatively similar methodology, as listed in Table 1. OA was induced in all mice models via transection of the medial collateral ligament (MCL), medial meniscus, and anterior collateral ligament (ACL). All three studies exhibited the beneficial effects of SMSCs-Exos in OA models.

Table 1. In vivo studies with exosomes derived from non-classic sources for knee osteoarthritis and cartilage injuries.

IPFP could serve as useful source of regenerative cells for cartilae repair as evidence shows it is responsible for some spontaneous joint repair in OA [27], and MSCs from the IPFP possess significnt chondrogenic potential [28][29]. Both MSCs and EVs including exosomes that are derived from IPFPs have been of interest for OA patients. Early success with IPFP-derived MSCs, as reviewed by Huri et al., spurred interest in IPFP-MSC derived exosomes (IPFP-Exos) [30]. Thus far, there has been only one in vivo study with IPFP-Exos for studying knee OA by Wu et al. [20].

Platelet-rich plasma (PRP) is human plasma that has an increased concentration of platelets. PRP has been of high interest due to platelets carrying large amounts of growth factors and anti-inflammatory cytokines that promote cartilage extracellular matrix sythesis and directly inhibit the expression of MMPs and other known mediators of OA [31]. However, due to the large variation in bioactive components, PRP efficacy as an OA treatment is heterogenous. For example, PRP was found in recent meta-analyses to be overall effective in releaving knee OA related pain, but in several studies the results are not statistically significant or clinically meaningful [32][33][34]. The concentrations of bioactive proteins vary largely depending on numerous factors, such as platelet, volume of PRP, use of activating factors, and residual red and white blood cell count. Thus, this variation can be eliminated by isolating and applying only the bioactive proteins, which are released via the secretion of exosomess. Prior research suggests that exosomes at least partially mediate the effects of PRP in certain processes such as for reepithelialization of chronic cutaneous wounds and preventing GC-induced apoptosis in a rat model of osteonecrosis of the femoral head, but the exact mechanisms still remain unclear, especially in knee OA [35][36][37].

Zavatti et al. created a rat OA model using monoiodoacetate (MIA) injections and then treated these mice 3 weeks after with 100 ug exosomes (on the basis that this is the amount of exosomes produced by 500,000 AFSC cells) [17]. OA mice treated with AFSC-Exos showed a significantly lower OARSI score, greater percentage of cartilage covering the joint surface on histology, less fibrous-connective tissue covering the joint surface, and greater pain tolerance compared to MIA-induced OA mice that were not treated with AFSC-Exos [17].

Umbilical cord MSC-derived exosomes (UMSC-Exos) have also been of high interest, especially due to a recent study showing that UMSCs are able to generate four times more exosomes per cell than BMSCs or AMSCs [38].To our knowledge, three in vivo studies with UMSC-Exos for knee cartilage defects has been conducted to date [21][24][26].

Many advancements in understanding the role of exosomes derived from human embryonic mesenchymal stem cells (human eMSCs-Exos) in OA of the knee have been made, as several in vivo studies have been completed successfully with comparisons between their methodology listed in Table 1. One of the first in vivo studies using human eMSCs-Exos for OA was by Zhang et al., where osteochondral defects were created surgically in the trochlear groove of the distal femur in a rat model, following the surgical procedure, 100 ug exosomes were administered weekly for 12 weeks [11]. At the end of 12 weeks, human eMSCs-Exos treated rats had better hyaline cartilage formation and subchondral bone regeneration with good surface regularity compared to control, defect knees treated with PBS only, which primarily continued to show fibrous and non-cartilaginous tissue [11].

Moving forward, many aspects of exosome research still need to be thoroughly explored, but in particular is the contents of exosomes, including any proteins, RNAs, small RNAs, miRNAs, and more. As mentioned in several studies earlier, many of the downstream therapeutic effects of exosomes are likely due to these contents targeting the expression of certain genes at the target cell.

In moving towards clinical use, many challenges in using exosomes still exist, including but not limited to dosage, frequency, safety, kinetics, and control batch differences. For exosomes derived from different sources, finding the ideal concentrations and optimal frequency of exosome administration in animal models and humans needed for therapeutic effects is critical. Likewise, standardization of the isolation, extraction, and storage processes is needed as well. In regards to safety, an early study has shown transplantation of human UMSC-Exos to be safe in animal models [39], and others have reported minimal immunogenicity of MSC-derived exosomes [40][41]. Nevertheless, study of immunogenicity of exosomes from an allogenic source might be necessary. More similar studies using the aforementioned exosomal sources is needed. As much of our current research and understanding is in the early stage, there remains much time until regulatory guidelines for exosomes can be properly established by the Food and Drug Administration (FDA). Some of the key considerations regarding the future directions of exosomes as therapies are summarized in Figure 1. 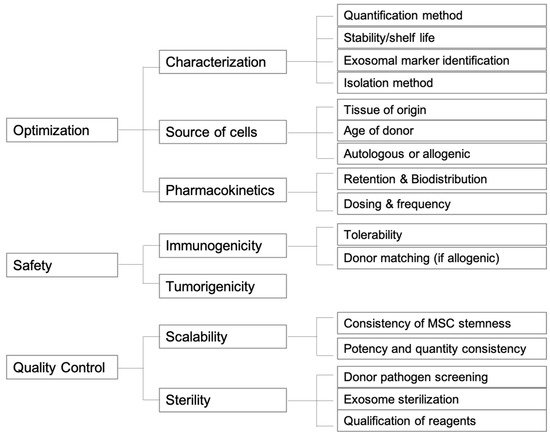