Various bioorthogonal chemistries have been used for fluorescent imaging owing to the advantageous reactions they employ. Recent advances in bioorthogonal chemistry have revolutionized labeling strategies for fluorescence imaging, with inverse electron demand Diels–Alder (iEDDA) reactions in particular attracting recent attention owing to their fast kinetics and excellent specificity. One of the most interesting features of the iEDDA labeling strategy is that tetrazine-functionalized dyes are known to act as fluorogenic probes.

Fluorescence imaging is one of the most important scientific tools for understanding biological systems [1]. To monitor the ongoing processes in innate biological systems, many different fluorescent bioprobes have been developed [2,3,4,5,6]. For successful fluorescence imaging, the preparation of fluorescent bioprobes must include minimal perturbation of the original properties of the biomolecule and the synthetic molecule during their labelling. In addition, it is desirable to reduce the number of steps required for imaging experiments to avoid perturbation of the biological system. Recently, many bioorthogonal, chemistry-based techniques have been developed to study innate biological systems [7,8,9,10]. Owing to the small size, high selectivity, and spatiotemporal controllability of biomolecules, various strategies have been used to label them. These biomolecules include nucleic acids, sugars, lipids, and proteins. In bio-orthogonal chemistry, inverse electron demand Diels–Alder (iEDDA) reactions have recently attracted attention owing to their fast kinetics and excellent specificity [11,12,13]. The iEDDA reaction is based on the interaction between tetrazine [14] and strained olefins (such as norbornene, trans-cyclooctene (TCO), and cyclopropane). Regarding the development of a fluorescent probe, one of the most important features of the iEDDA labeling strategy is its potential to impart fluorescence. Tetrazine-functionalized dyes are known to act as fluorogenic probes, where they significantly increase the fluorescence intensity upon their reaction with a strained dienophile such as TCO. These tetrazine-functionalized fluorogenic probes are especially interesting for live-cell labeling and fluorescence imaging applications because the fluorogenic reaction could lower the background noise and potentially eliminate the need to wash off any excess fluorophore. In addition, this feature could be particularly useful for monitoring fast, highly dynamic, biological processes via the in situ fluorescence labeling of cellular compartments that can then be visualized and tracked by various microscopy techniques with spatiotemporal control. Furthermore, the fast kinetics and biocompatibility of tetrazine-functionalized dyes give them great potential for use in fluorescence bioimaging.

As tetrazine-based fluorogenic probes enable a molecular-level understanding of biological systems, synthetic methods have been widely investigated to obtain various types of tetrazine-functionalized fluorophores. There are two distinct approaches for synthesizing tetrazines [13]. Traditionally, tetrazines were obtained via Pinner and “Pinner-like” reactions, which involve condensation and subsequent oxidation reactions with nitriles and hydrazine. Although these conventional approaches have significantly contributed to the synthetic accessibility of tetrazines, they are not applicable to many kinds of tetrazines. Recently, metal-catalyzed C–C bond formation using convenient tetrazine intermediates has received significant attention as an alternative method. In this section, we discuss recent findings that can successfully improve the utility and scope of the reaction. Finally, examples of the synthesis of tetrazine-conjugated fluorophores, which can act as bioprobes, using recently developed methods are presented.

The first synthetic route to tetrazine, reported by Adolf Pinner, involves the condensation reaction of imidoesters with hydrazine to afford dihydrotetrazine intermediates (Scheme 1a) [15]. The final tetrazines were prepared by the subsequent oxidation of the dihydrotetrazine intermediates. Based on this study, alternative, one-pot syntheses of tetrazines using nitriles and hydrazine (Scheme 1b), commonly known as “Pinner-like” reactions, were reported [16]. Although beneficial, the practical applications of these approaches are restricted because the preparation of unsymmetrical 3,6-disubstituted tetrazines using two different nitriles results in the formation of inevitable byproducts such as symmetrical tetrazines. Moreover, they are not suitable for the synthesis of alkyl tetrazines from aliphatic nitriles [13]. To overcome these limitations, Devaraj et al. developed a metal-catalyzed reaction for the synthesis of a series of alkyl tetrazines, where Zn(OTf)2 and Ni(OTf)2 act as Lewis acids to promote the addition of hydrazine to inactivate alkyl nitriles (Scheme 1c) [17]. This approach has significantly improved access to alkyl and unsymmetrical tetrazines. Additionally, monosubstituted, unsymmetrical tetrazines can be synthesized in high yields via the condensation of a formamidine salt and nitrile in the presence of a Ni or Zn catalyst. However, this method is limited by the use of reactive and hazardous anhydrous hydrazine. Hydrazine is a good reductant and a good nucleophile; thus, the reactions it is employed in usually offer poor substrate scopes and harsh conditions [14]. To overcome these limitations, organocatalytic approaches for the preparation of unsymmetrical tetrazines were developed by Wu et al. in 2019 (Scheme 1d) [18]. It was suggested that a thiol-containing organocatalyst could promote the formation of unsymmetrical tetrazines at room temperature from hydrazine hydrate and nitriles bearing reactive functional groups. These mild reaction conditions expanded the access to gram-scale synthesis and imparted a broad substrate scope. 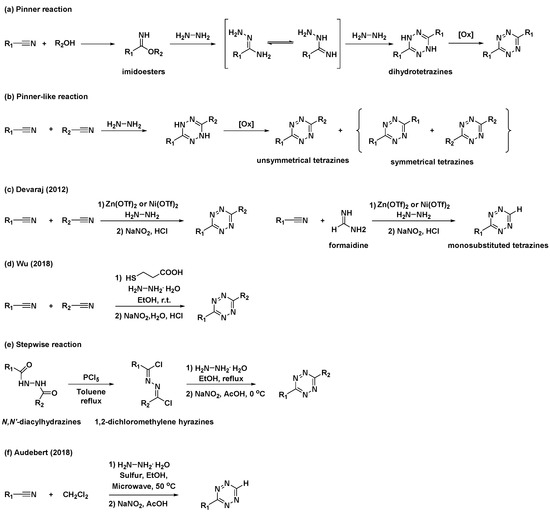 Additionally, several studies have been conducted to address unmet needs. For example, applications of N,N′-diacylhydrazines for the synthesis of unsymmetrical tetrazines have been reported (Scheme 1e) [19]. N,N′-Diacylhydrazines were prepared by the sequential introduction of acyl groups into hydrazine. They were first converted to 1,2-dichloromethylene hydrazines by treatment with PCl5, followed by the condensation of hydrazine and subsequent oxidation to yield unsymmetrical tetrazines with aliphatic substituents. Sulfur-mediated “Pinner-like” reactions generating reactive nucleophile NH2NHSH were generally used to synthesize aromatic tetrazines [20]. Recently, Audebert et al. demonstrated that dichloromethane (DCM) could be used as an alternative reagent for the formamidine salt when preparing monosubstituted unsymmetrical tetrazines via sulfur-mediated “Pinner-like” reactions (Scheme 1f) [21]. 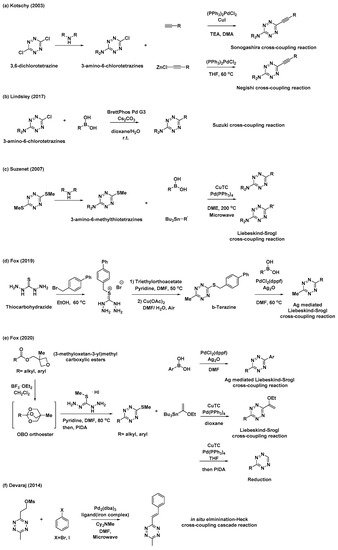 Thioether tetrazines are one of the most useful intermediates for the synthesis of unsymmetrical disubstituted tetrazines. Suzenet et al. reported the Liebeskind–Srogl cross-coupling reaction of disubstituted thioether tetrazines with various boronic acids and organostannanes to yield tetrazines with aryl, heteroaryl, and vinyl substituents (Scheme 2c) [24]. Similar to 3-amino-6-chlorotetrazines, 3-amino-6-methylthiotetrazines were easily obtained from 3,6-bis(methylthio)-1,2,4,5-tetrazine through nucleophilic displacement. This approach has sparked great interest in the development of other valuable thioether tetrazine intermediates. In 2019, Fox et al. demonstrated that 3-thioalkyl-6-methyltetrazines, especially 3-((p-biphenyl-4-ylmethyl)thio)-6-methyltetrazine (b-tetrazine), could serve as a useful intermediate for the synthesis of 3-aryl-6-methylterazines through Ag-mediated Liebeskind–Srogl cross-coupling reactions (Scheme 2d) [25]. To prepare b-tetrazine on a decagram scale, thiocarbohydrazide was subjected to S-alkylation with 4-bromomethylbiphenyl, followed by the condensation of the resultant salt with triethylorthoacetate and subsequent Cu(OAc)2-catalyzed air oxidation. Compared to those of the typical, copper(I)-mediated Liebeskind–Srogl cross-coupling reaction, the synthetic scope and utility of this Ag-mediated reaction were significantly broader. Furthermore, this new Liebeskind–Srogl cross-coupling protocol is an outstanding synthetic method for the preparation of unsymmetrical tetrazines. In 2020, the same group also synthesized 3-substituted-6-thiomethyltetrazines intermediates bearing various alkyl or aryl groups (Scheme 2e) [26]. This versatile synthetic route begins with the conversion of (3-methyloxetan-3-yl)methyl carboxylic esters into oxabicyclo [2.2.2]octyl (OBO) orthoester intermediates in the presence of BF3∙OEt2. These compounds then undergo further condensation reactions with S-methylisothiocarbohydrazide hydroiodide and subsequent oxidation to afford the 3-substituted-6-thiomethyltetrazines intermediates. These intermediates can be converted into unsymmetrical tetrazines through the Liebeskind–Srogl cross-coupling reaction, as well as into monosubstituted tetrazines through catalytic thioether reduction. It is worth mentioning that these synthetic methods provide convenient access to various unsymmetrical, aliphatic, aromatic, and heterocycle-substituted tetrazines.

2.3. Conjugation of Tetrazine to Fluorophores

In addition to the synthetic endeavors to address the challenges associated with tetrazine, various studies have been conducted on the conjugation of tetrazine to fluorophores for applications in the field of bioorthogonal chemistry. As mentioned previously, 3-thioalkyltetrazine can be converted into various unsymmetrical 3,6-disubstituted tetrazines. Thus, Fox et al. synthesized 3-BODIPY-6-methyltetrazine (BODIPY = 4,4-difluoro-4-bora-3a,4a-diaza-s-indacene) modifying a BODIPY core with b-tetrazine and phenyl boronic acid through an Ag-mediated Liebeskind–Srogl coupling reaction (Scheme 3a) [25]. Additionally, they demonstrated the application of (3-methyloxetan-3-yl)methyl carboxylic esters with BODIPY for the synthesis of a BODIPY dye with mono-or di-substituted tetrazines (Scheme 3b) [26]. Wombacher et al. utilized Stille cross-coupling to prepare 3-fluorescein-6-methyltetrazine (Scheme 3c) [28]. They prepared another tetrazine intermediate, 3-bromo-6-methyltetrazine, from 3-(methylthio)-6-methyltetrazine through nucleophilic addition of hydrazine followed by bromination. Park et al. utilized Pd-mediated C–H activation for the incorporation of the tetrazine moiety into the Seoul-Fluor (SF) scaffold to synthesize SFTz01 (Scheme 3d) [29]. SFTz02 could also be synthesized through a Zn-catalyzed “Pinner-like” reaction (Scheme 3d). In addition, Oregon-Green and tetramethylrhodamine (TMR) derivatives with π-conjugated tetrazines were prepared via cascades of eliminations and Heck cross-couplings reaction using a mesylate tetrazine precursor (Scheme 3e) [27]. 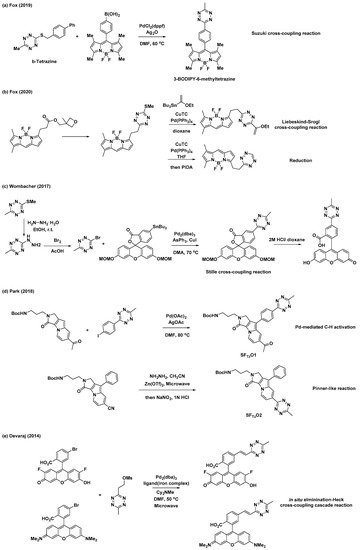