Clavulanic acid is an irreversible β-lactamase enzyme inhibitor with a weak antibacterial activity produced by the filamentous actinomycete Streptomyces clavuligerus (S. clavuligerus) and, in a lesser extent, by other streptomyces species. Clavulanic acid is typically co-formulated with broad-spectrum β‑lactam antibiotics such as amoxicillin and ticarcillin, conferring them high potential to treat infectious diseases caused by β‑lactam-resistant bacteria like Escherichia coli, Staphylococcus aureus, Neisseria gonorrhoeae and Streptococcus pneumonia.

Clavulanic acid is a β-lactam compound with modest antibiotic activity but high inhibition capacity of β-lactamase enzymes [1]. The clavulanic acid molecule is an analog of the penicillin nucleus, in which the characteristic sulfur atom has been substituted by an oxygen atom. Clavulanic acid is one of the so-called “clavam metabolites” produced by the filamentous bacterium Streptomyces clavuligerus (S. clavuligerus); most of those metabolites have the characteristic fused bicyclic β-lactam/oxazolidine ring. Nevertheless, the clavulanic acid molecule (Figure 1) has 3R, 5R stereochemistry, opposite to the 3S, 5S configuration present in other clavam metabolites, which do not exhibit β-lactamase inhibition activity, although some of them have antibacterial or antifungal properties [2]. In addition to the stereochemistry, the inhibitory effect of clavulanic acid has been explained by the presence of the β-lactam/oxazolidine ring that bonds irreversibly with a serine residue in the catalytic center of the β-lactamase enzyme, thus rendering it inactive [3]. Currently, clavulanic acid is used in combination with other β-lactam antibiotics as an effective treatment against several clinical syndromes including pneumonia and exacerbations of chronic obstructive pulmonary disease, complicated intra-abdominal infections, acute infectious diarrhea, urinary tract infections, pharyngitis, surgical, wound, and skin infections [4]. Some of them are caused by resistant pathogenic bacteria already included in the World Health Organization priority list: Escherichia coli, Staphylococcus aureus, Neisseria gonorrhoeae, Streptococcus pneumonia, and all Enterobacteriaceae and Klebsiella species [5]. 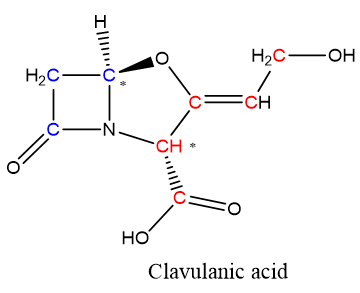 The antibiotic resistance phenomenon emerged along with the antibiotic era [6][7]. Years before penicillin was used at global scale, a penicillinase enzyme able to inactivate penicillin was discovered in bacteria extracts [8]. Antibiotic resistance has forced humanity to maintain an endless search for new and more powerful antibiotics. In this regard, the pharmaceutical industry plays a key role in the development of effective treatments against such multidrug-resistant bacteria [5]. Since the discovery of benzylpenicillin in the 1920s, the class of compounds referred to as β-lactam antibiotics has been the most extensively used antibiotics. Nevertheless, a significant number of different antibiotic compounds (such as carbapenems, cephamycins, cephalosporins, and monobactams) has been developed and implemented in the clinical practice as a strategy to evade the acquired resistance [9]. The new combinations of antibiotics are aimed to increase their spectrum of activity and overcome the resistance barriers developed by the bacteria. In order to mitigate the bacterial resistance to β-lactam antibiotics, several compounds have been identified as β-lactamase inhibitors. Those compounds can irreversibly inactivate the β-lactamases allowing the β-lactam antibiotics to act against the infection. The main β-lactamase inhibitors are Sulbactam, Tazobactam, and clavulanic acid, commercialized as sodium or potassium clavulanate salt.

Clavulanic acid is produced worldwide at large scale by several pharmaceutical companies, and it is also prescribed in more than 150 countries [1]. Clavulanic acid has a relatively limited market availability and a middle–high cost for the health system, especially in the developing countries when compared with the income level, being quite inaccessible for people without health insurance. The cost of clavulanic acid is mainly related to the complexity of the production process, the current uncertainties about the regulatory elements controlling the clavulanic acid biosynthetic gene cluster and the intellectual property associated with its production [2]. Despite the significant number of studies related to clavulanic acid production in S. clavuligerus submerged cultivations, low titers (~1 g∙L-1) are still obtained when using a wild type strain. The productivity of clavulanic acid production bioprocess is also compromised by the downstream processing: clavulanic acid separation from fermentation broths and precipitation as clavulanate salt.

The Streptomyces genus produces a wide variety of secondary metabolites with antimicrobial activity (approximately two-thirds of which occur naturally) [10]. In 1971, Nagarajan et al. [11] reported a new Streptomycete species as producer of two cephalosporin compounds. This new species was then named and described as S. clavuligerus by Higgens and Kastner, also in 1971 [12]. Later, in 1976, Howarth and Brown [13] described the clavulanic acid chemical structure, which was elucidated via spectroscopic and X-ray analyses and reported as a novel fused β-lactam compound with a significant inhibitory activity of β-lactamases. In 1977, Reading and Cole described the cultivation conditions of S. clavuligerus to produce clavulanic acid and the spectrometric method for clavulanic acid detection [3].

In 1941, the biochemist Selman Waskman described the most accepted definition of “antibiotic” as a small molecule made by microorganisms that inhibits the growth of another microorganism. During the “golden age” of antibiotics, approximately 70–80% of the antibiotics discovered came from Streptomycetes, but the evolutionary reason for the development of antibiotic biosynthetic capacity of soil bacteria and its ecological role are still unknown. Soil bacteria are not very efficient at up-taking nutrients, and their growth rate is considerably low in comparison with other bacteria and fungi. A plausible hypothesis that is widely accepted implies that antibiotics secretion allows the producer to control the organisms competing for the same nutritional resources in a hostile multispecies environment [14]. This is consistent with the secondary nature of antibiotics secretion under nutritional restriction. However, the antibiotic compounds at very low concentrations can modulate the transcriptional profiles of target bacteria and the products of resistance genes would silence those messages, opposing the theory of the development of attack and defense mechanisms [14]. Mathematical estimations point out that Streptomycetes are able to produce around 100,000 antibiotics and only 3% of them have been discovered [15]. Similarly, the existence of cryptic biosynthetic gene clusters (BGCs) suggests a higher capacity of antibiotic production in those organisms [16][17][18].

Clavulanic acid is secreted as a secondary metabolite, also referred as a specialized metabolite, by S. clavuligerus under nutritional restriction. The role of clavulanic acid in the physiology and adaptation of S. clavuligerus is also unknown. As a β-lactamase inhibitor, clavulanic acid may be part of a self-resistance mechanism involving the synthesis of β-lactam antibiotics, β-lactamase enzymes, and β-lactamase inhibitors; possibly developed by Streptomyces species to defend themselves from the effect of the antimicrobials [10]. Clavulanic acid biosynthesis is induced during phosphate limited conditions; recently it has been proposed that clavulanic acid production may be a consequence of a homeostatic response aimed to compensate for the ATP deficit under phosphate depletion [19]. This mechanism would trigger a strong activation of oxidative and amino acid metabolism, producing reduced cofactors and ATP and favoring the antibiotic biosynthesis as a feasible mechanism to adjust the ATP generation [19]. Moreover, the simultaneous secretion of penicillin and cephalosporins antibiotics along with β-lactamase enzymes and β-lactamase inhibitors would tightly control the energetic impact of an ATP-consuming futile cycle of polymerization/degradation of the cell wall caused by the β-lactam antibiotics accumulation [19].

In addition to the clavulanic acid, other metabolites have been identified as side compounds of this biosynthetic pathway, namely, N-glycyl-clavaminic acid, N-acetylglycyl-clavaminic acid, and N-acetyl-clavaminic acid. It has been suggested that those compounds result from the intermediate steps involved in the transition of the 3S, 5S stereochemistry into the 3R, 5R of clavulanic acid [26]. Additionally, several metabolites (2-hydroxymethylclavam, 2-formyloxymethylclavam, clavam-2-carboxylic acid, and alanylclavam) have been identified and grouped as clavam 5S compounds due to their 3S, 5S stereochemistry [27][29][30]. Despite their structural similarity and common precursors, only the clavam compounds with a bicyclic nucleus formed by the β-lactam ring and an oxazolidine ring with 3R, 5R stereochemistry can effectively inhibit the β-lactamases [29].

Glycerol is the main substrate in the clavulanic acid production by S. clavuligerus as it has direct incorporation into the glycolytic pathway by forming glyceraldehyde 3-phosphate, the first C-3 precursor of clavulanic acid [31][32]. Then, the carbon flux splits into three pathways, two of them belonging to the primary metabolism: glycolysis and gluconeogenesis, and one belonging to the secondary metabolism: the clavam pathway [32]. In addition to glyceraldehyde 3-phosphate, the need for a C-5 precursor implies the constant demand for L-arginine. This amino acid is synthesized in the urea cycle while L-glutamate and L-aspartate promote its biosynthesis by fueling the urea cycle in the oxidative direction [19][32]. 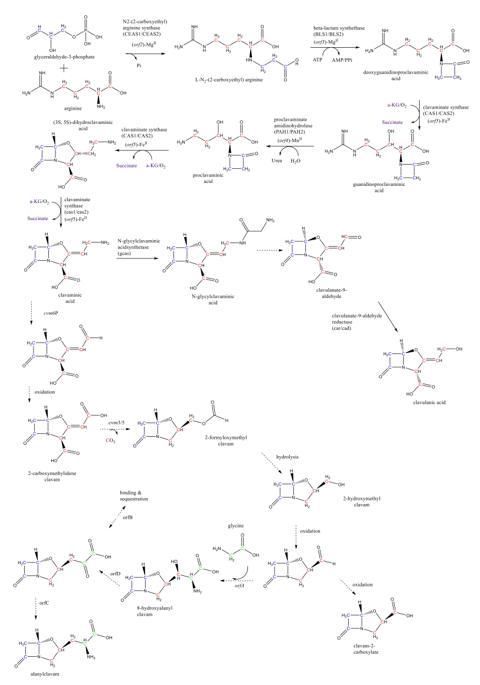 Figure 2. Summary of the CA biosynthetic pathway in S. clavuligerus. The green, blue, and red Cs represent the carbon atoms coming from metabolic intermediates such as glycine, glyceraldehyde 3-phosphate, and L-arginine, respectively. Adapted from the work in [43].