Terpenes are the primary constituents of essential oils and are responsible for the aroma characteristics of cannabis. Together with the cannabinoids, terpenes illustrate synergic and/or entourage effect and their interactions have only been speculated in for the last few decades. Hundreds of terpenes are identified that allude to cannabis sensory attributes, contributing largely to the consumer’s experiences and market price. They also enhance many therapeutic benefits, especially as aromatherapy.

Cannabis sativa L. or cannabis is a herbaceous annual that has a long history of use around the world as fiber, food, oil as well as medicine. Depending on the purposes of utilization, they can be called by different names; for example, “hemp” as a fiber and textile crop and “recreational cannabis”, or known in the USA as marijuana. Aside from its quality as an industrial textile, the psychoactive properties have labeled a grey stigma to cannabis plants as being an illicit drug with many informal names including pot, dope, grass, weed, Mary Jane, bud, hash, bhang, kef, ganja, locoweed, reefer, doob, spliff, toke, and roach. It has been forbidden to grow in many countries due to the psychoactive ingredients contained [1]. In a medical sense, many recent studies have advised that the increase in cannabis use was in association with psychiatric symptoms including depression and anxiety [2][3]. However, many users still exclusively endorse its recreational purpose [4][5]. As a result, there has been a strong movement toward correcting negative attitudes of the cannabis and attempts have been made in trying to remove this plant from narcotic lists. In Thailand, for instance, as from 2020, cannabis strains such as กัญชง (hemp) and กัญชา (marijuana) are legally grown for industrial fiber or medicinal purposes under the controlled level of active metabolites including cannabinoids of Δ9–tetrahydrocannabinol (THC) and cannabidiol (CBD) [6]. While focus has paid attention primarily to the bioactive functions of the cannabinoids, the hydrocarbon terpenes could also offer interesting entourage effects that could ideally synergize or downstream their effects [7]. Eminently, with the rise in the legal cannabis industry, interest has been made around cannabis terpenes as they contribute many of the different aromatic characteristics that influence the diverse varieties of cannabis strains [8]. Within the scope of this review, we provide the general background history of cannabis discovery and the importance of the terpenes. The taxonomy and morphology of the cannabis, particularly the localization of the terpenes, are discussed. More importantly, the chemistry, biosynthesis, and diversity of terpenes in different cannabis genotypes are of major interest in this review.

2. Taxonomy and Localization of the Cannabis Terpenes

Cannabis belongs to the small family of Cannabaceae, which includes hop and Celtis berry. It is a dicotylate angiosperm that gives incomplete (lacking of petals) and also imperfect flower types with the separated sexual organs. The flower bears only pistils, known as pistillate flowers (or female flowers), and those with only the stamens are called staminate (or male flowers). In nature, cannabis produces either male or female flowers (dioecious), however, under short-day conditions, it may give both male and female flowers or monoecious. Plants are able to grow as high as 3 m or smaller depending on the varieties and the conditions of growth. The flowers often initiate as groups of flowers or as an axillary bud (Figure 1 a,b). The stem consists of the outermost layer of the epidermis, which is thin and coarse, and the primary and secondary layers that provide the better fiber quality. The innermost, which is the lignified secondary blast fiber, give the best fiber quality [9][10].

Leaves are palmate with 5–7 leaflets. The male flower (Figure 2a) has no petals, usually with five yellowish tepals, and five anthers yielded pollen. The female flower (Figure 2b) had a single-ovulate and was enriched with the trichome structures, which are the localization of the cannabinoids and the terpenes as shown in Figure 2c. These terpenes are responsible for the defense and interaction with herbivores and pests.

Figure 2. The cannabis staminate flowers (a) and pistillate flowers (b) with the trichome structures as the localization of cannabinoids and terpenes of Kees’ Old School Haze® (available at https://dutch-passion.com) (c).

Taxonomists classified cannabis plants into three species in the early days: (i) C. sativa Linnaeus, (ii) C. indica Lamarck, and (iii) C. ruderalis [11][12]. Today, many researchers are convinced that the cannabis that grows commercially is C. sativa L, but the subvariety “sativa” should be known as hemp and the subvariety “Indica” should be called recreational cannabis or marijuana.

Three types of glandular trichomes are characterized based upon their surface morphology, namely bulbous, sessile, and stalked (Figure 3a) [13]. Bulbous trichomes are the smallest, while sessile trichomes appear on the epidermis with a short stalk and globose head comprised of a multicellular disc of secretory cells and a subcuticular metabolite storage cavity. Similarly, the stalked trichomes are slightly larger with a globose head elevated above the epidermal surface by a multicellular stalk [14]. In cannabis, the sessile and stalked trichomes differ not only in morphology, but they also have distinct fluorescent properties, number of cells in their secretory disc, and terpene profiles [15]. The stalked glandular trichomes of mature flowers have a globular head consisting of an enlarged disc greater than eight secretory cells known to be rich in cannabinoids and monoterpenes (Figure 3b). The sessile trichomes are mainly found on sugar leaves (Figure 3c). They have eight secretory cells that produce less cannabinoids and higher proportions of sesquiterpenes. 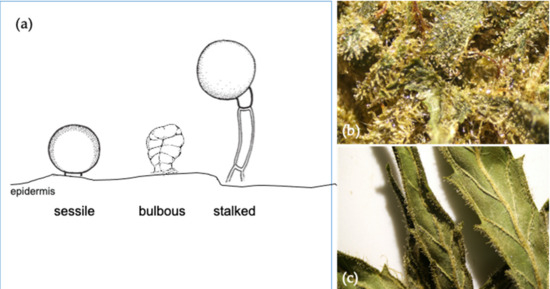 Figure 3. Different trichome structures for cannabis plants (a); the stalked types that are available on the floral surface (b); and sugar leaf structures with the presences of trichomes of the Cannabis sativa L. var. Kees’ Old School Haze® (available at https://dutch-passion.com) (c).

To separate the trichomes, the flowers are usually pre-frozen or freeze-dried and then are gently rubbed on the sieve mesh. The trichomes separated in this process are known as kief, which can be pressed to make hash. In Nepal, hash is hand-shaped into balls, also known as wax or “Charas” [16]. Hash oil, on the other hand, is the concentrated hash that has been dissolved in organic solvents such as alcohol, propane, or butane [17][18]. The extraction allows pigments such as chlorophylls and other contaminants to be extracted along with the terpenes, resulting in a dark green color extract. After extraction, the solvent is then removed by evaporation either by direct heat or under a vacuum, resulting in the oil product with high viscosity.

In the past, identifying the terpene profile of the cannabis was for the purposes of improving canine training aids in illicit drug detection [19]. In the world of the cannabis industry, however, terpenes play a vital role in differentiating the flavor and aroma that are specific to the particular strains [20]. Some terpenes can enhance the effect of cannabinoids and synergize the feeling of relaxation, stress relief, energy boost, and maintaining focus along with their underlying pharmaceutical functions [21][22]. Thus, a growing number of industries have shown interest in adding either cannabis terpenes or botanically-derived terpenes to their CBD oils and edibles. The estimated growth in this sector should reach a 20 billion-market by 2024 [23][24]. The success in this sector might be challenged by a few restrains. First, the consumer believes that the functionality and safety are truly related to sources, perceived novelty, and most importantly, perceived benefits [25][26]. Additionally, the extraction of the full-spectrum oil consisting of a full mix of naturally occurring cannabis terpenes is almost impossible. The most cost-effective way is to selectively separate the terpenes and include them back into the final products [27][23].

Numerous terpene recovery techniques have been developed by solvent-based or solvent-less. Essential oils are usually hydro-distillated extracts from the trichomes of cannabis containing mostly terpenes or terpenoids. Although most of the constituents remain intact during distillation, a few monoterpenes may undergo chemical changes or are quite often lost due to the nature of the distillation process [28][20]. The other possible technique is steam distillation by passing dry steam through the inflorescences of the cannabis whereby the terpenes are volatilized, condensed, and collected [29][30]. Moreover, the microwave-assisted extraction (MAE) can enrich bioactive compounds. The MAE treatment using high irradiation power and relatively long extraction times significantly increased the content of CBD in the essential oil with considerably high yield when compared with the conventional hydro-distillation techniques [31]. In Canada, for instance, the commercial production of the extract is achieved by either solvent extraction such as butane or supercritical fluid (SFE) with the restriction on product purity of no solvent contaminants [32]. The later technique is known to give superior performance in terpene recovery [33]. SFE has recently become a much-preferred method for terpene recovery, largely because it allows using lower temperatures, leading to less deterioration of the thermally labile components and is free from organic solvents [33][34]. A supercritical fluid is the substance at a temperature and pressure above its critical points, with no boundary between the liquid and gas stage. At these points, the fluid is low in viscosity with high diffusion properties to dissolve chemical molecules from the plant matrix. Carbon dioxide (CO2) is generally used because it is nonflammable, relatively inexpensive, and non-toxic. Large amounts of terpene ingredients were recovered from this method (i.e., up to 50%, 20% and 10% of caryophyllene, humulene and limonene, respectively, can be recovered compared to the conventional methods) [34].

Recreational cannabis as a food ingredient has become more acceptable in a broader public context in which cannabis terpenes have gained high industrial attention in recent years. The terpene profiles not only embody the characteristics of cannabis genotypes, but their entourage effect with cannabinoids could enhance their medicinal functionality. This review highlights the importance of understanding cannabis terpene chemistry and provide descriptive profile categories of different cannabis commercial strains.