Anaerobic digestion can produce bioenergy and value-added products from biodegradable residues; it represents an approach to close the loop in a circular bioeconomy. Examples are summarized in

among others. Anaerobic digestion is a well-established and mature technology in Europe with more than 18,000 production plants in 2018 that are already providing about 14% of renewable energy. Moreover, as calculated by the World Biogas Association, the biogas and biomethane sector of anaerobic digestion can potentially reduce greenhouse gas emissions by 10–13%

In brief, anaerobic digestion of biodegradable residues consists of four metabolic stages, as shown in

. During hydrolysis, bulk biomass is degraded to soluble carbohydrates, proteins and lipids followed by acidogenesis, where these are converted mainly to short-chain carboxylic acids (SCCA) and alcohols. In acetogenesis and methanogenesis, acetic acid is consumed or assimilated and converted to methane and carbon dioxide. For the vast majority of biodegradable waste, hydrolysis represents the process bottleneck due to slow rates and incomplete degradation

. Many reviews have been published on pretreatment methods of various biogenic residues to improve hydrolysis which include mechanical, thermal, chemical, biological and mixed pretreatments. The most promising of these methods concerning hydrolysis efficiency need high-energy inputs (e.g., thermal/microwave treatment) or huge amounts of chemicals (acidic pretreatment), which makes the process costly in industrial scale

. The introduction of a separate reactor stage focused on microbial hydrolysis in anaerobic digestion has already shown to increase the net energy output in pilot scale fermentations, making it a promising as potential biological pretreatment. Separation of the hydrolysis–acidogenesis and acetogenesis–methanogenesis enables the optimization of process parameters to the different conditions of the corresponding microorganism, enabling higher efficiency in hydrolysis and methanogenesis

. While hydrolytic and acidogenic microorganisms favor a slightly acidic pH around 5.0–6.0, the methanogenic species are rather sensitive and thrive at neutral pH and mesophilic conditions. There are some examples of a separate hydrolysis and acidogenesis in a three stage AD, the strong syntrophic relationship between acetogens and methanogens makes the separation of the last stages adverse

Since currently more complex and unsteady sources of organic residues are used as substrates for AD, flexibilization of AD is of high importance. Microbial communities in a hydrolysis stage are able to adapt to changing substrates and loading rates and are able to digest the biogenic residues under optimal process conditions 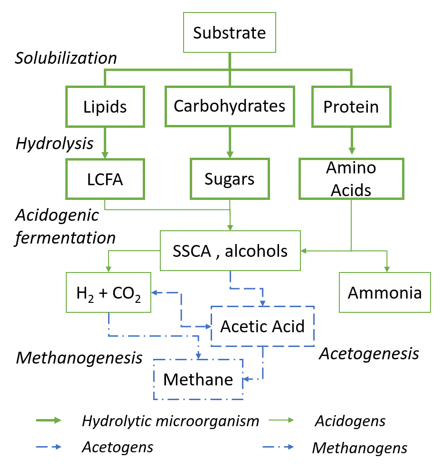 Microbial Consortia and the Main Products in a Microbial Hydrolysis Stage

The substrates for anaerobic digestion are very diverse and can roughly be divided into three groups: liquid residues, solid residues and lignocellulosic residues. While all the substrates are biodegradable, they feature very different biochemical properties and composition. Substrates high in easily digestible sugars as food waste are easier to digest than lignocellulosic substrates like grass silage. Nonetheless, all contain polymers that need to be hydrolyzed

The substrates for anaerobic digestion are very diverse and can roughly be divided into three groups: liquid residues, solid residues and lignocellulosic residues. While all the substrates are biodegradable, they feature very different biochemical properties and composition. Substrates high in easily digestible sugars as food waste are easier to digest than lignocellulosic substrates like grass silage. Nonetheless, all contain polymers that need to be hydrolyzed

These polymeric substances (lipids, proteins, carbohydrates) in the substrate are broken down into low molecular-weight intermediates with molecular weight < 1000 Da by extracellular enzymes, which are secreted by the microbial community. The intermediates are then taken up by the cells. The extracellular hydrolases as e.g., lipases, proteases and glucosidases are expressed free into the fluid phase, bound to microbial membranes or immobilized in a multi-enzyme complex called the cellulosome

. Cellulolytic microorganisms have developed complex enzyme systems for the hydrolysis of recalcitrant cellulosic biomass, as discussed by Himmel and co-workers

. Enzyme expression and enzymatic activity are of high significance for the hydrolytic step in anaerobic digestion

. Some intermediates produced in hydrolysis as ammonia and LCFA were found to have inhibiting effects on the anerobic digestion process and require acclimatization of the microbial community or operational strategies for efficient digestion. Moreover, hydrolytic organisms metabolize the monomers produced by hydrolytic enzymes and concurrently produce intermediates from acidogenesis as SCCA and hydrogen.

Anaerobic digesters are usually inoculated with a mixed microbial consortia from running fermentations. Depending on parameters like substrate, inoculum and environmental growth conditions, the microbial community develops over time. The hydrolysis stage is usually dominated by bacteria like

However, changing process conditions and substrates promote the enrichment of various microorganisms

. Moreover, aerobic fungi like white-rot fungi are common for digestion of lignocellulosic biomass

. In the hydrolysis stage, different metabolic types of fermentation have been identified with their bacterial key players. Butyric type fermentation with high production of acetic acid, butyric acid and hydrogen with dominance of

is considered best for two-stage AD and can be influenced by process parameters as pH, organic loading rate (OLR), oxidation–reduction potential

. The influence of OLR seems to vary with the substrate, but various groups found that pH > 5.0 favors butyric type fermentation, whereas a lower pH leads to dominance of

. Ethanol-type fermentation is observed mostly at pH 4.0–4.5 and may feature high gas production

. Propionic acid is another mayor fermentation product. Depending on the substrate, it can reach a proportion of 20–40%, predominantly in AD of protein-rich waste as sunflower oil cake

. It has been found that in the AD of carbohydrate-rich substrate, acetate and propionate are dominant at mesophilic temperature and acidic pH, whereas the fermentation shifts to butyrate at thermophilic AD

. Since butyric type fermentation is considered best for two-stage AD, pH regulation towards pH 5.0–6.0 in the hydrolysis stage plays a significant role for total process performance.

Stage separation of AD allows the enrichment of specific microorganism in each digester. The second stage of AD is dominated by methanogenic archaea that have a higher sensitivity for process conditions like temperature and pH than the hydrolytic bacteria. pH below 6.5 and thermophilic temperature decrease archaea diversity

. In a study of Hameed et al., the abundance of

assumed to be a main producer of methane in biogas production

. As a diverse microbiome is assumed to be more stable, staging of AD leads to a better process performance. Hydrolysis rate and deactivation of pathogens are increased with a rising temperature, making a thermophilic process (50 °C–60 °C) attractive. The traditional mesophilic process (30 °C–40 °C) offers higher OLR, better stability and less energy requirements. A good compromise seems to be the temperature-phased AD with a thermophilic hydrolysis stage and mesophilic second stage

The knowledge about microbial communities and metabolic pathways in AD is very important to understand and adapt the process conditions for the desired products. The authors would like to refer to the review on the dynamics of the microbiome in AD by the group of Castellano-Hinojosa et al. for further information

3. Microbial Hydrolysis in a Separate Stage

Reviews on multi-stage AD systems for biodegradable waste have been published by Van et al.

and Chatterjee and Mazumder

who conclude, that two-stage AD is a robust, flexible and efficient system offering shorter hydraulic retention times (HRT), higher organic loading rates (OLR), higher digester efficiency and higher gas yields compared to single-stage AD. Two-stage AD is most efficient for biogenic residues with a solid content between 3–20%. Below a solid content of 3%, the single-stage AD is more efficient in terms of energy efficiency, whereas for high solid substrate, there is a significant increase in required energy input to dilute the substrate in a continuously stirred tank reactor (CSTR) system

. The process is more resistant to shock loadings and variable substrate, making it a promising system for the application in biorefinery systems

. The better hydrolysis and acidogenesis also improve digestate stability and thus lower the environmental impact of the residues of AD. Compared to the conventional monodigester, two-stage AD improved the biostabilization efficiency of codigested FW and waste water sludge from 6.5% to 40.6% The application of digestate as fertilizer is facilitated

The implementation of a separate hydrolysis–acidogenesis stage in AD allows the concurrent production of hydrogen, SCCA and methane. While sequential production of hydrogen and methane improves energy efficiency, there are also various other potentials downstream from a hydrogen-producing hydrolysis stage featuring photo-fermentation, power generation in a microbial electrolyzer or a biochemical stage for biopolymer production. Rising interest has evolved in the production of biohythane via two-stage AD, a hydrogen-enriched biogas with better quality, good caloric efficiency and enhanced combustion. The hydrogen proportion in biohythane varies from 10–30%

v/v of hydrogen, but also a low proportion enhances the combustion properties of a biogas blend

. Similarly a full-scale co-digestion biogas plant has been upgraded with a hydrolysis stage instead of using the former practice of ultrasonic pretreatment as it promised higher yields, higher OLR and lower HRT

Anaerobic digestion with a separate hydrolysis stage is mostly conducted without any treatment except some shredding of bulk substrate. Stage separation widens possible applications of the whole process with the introduction of intermediary steps or recirculation. It was reported, that AD of acidic citrus waste, where low pH and the main component D-limonene (68–98%) are toxic for many microorganisms, is feasible using two-stage AD. pH control in the hydrolysis stage via effluent recirculation helps to relieve the toxic effects of D-limonene, which is mostly retained in the first stage or can be filtrated, thus lowering the inhibitory effect on the sensitive methanogens

. The potential to use the hydrolysis stage as a detoxification step was also explored. It was found that inhibitors built up during hydrothermal pretreatment of solid waste can be removed by acidogenic bacteria in the hydrolysis step

. Likewise, inhibitors from thermal or chemical pretreatment of lignocellulosic biomass are degradable in the first stage by certain microbes

that can metabolize furans, among others. The drawbacks of biological detoxification are long process times and the consumption of sugars

. Countermeasures to relieve problems with inhibitors comprise methods of feedstock engineering, detoxification steps and genetic or evolutionary engineering, which are either feedstock specific or require several process steps

. Integrating a microbial detoxification step in two-stage AD may be a promising method to combine the advantages of pretreatment and a two-stage AD.

The stable process within a two-stage AD provides a better basis for on-demand production of biogas. Biomass-derived energy has the potential to balance fluctuating natural power sources like solar and wind energy, as biomass is highly available and AD predictable

. By variation of substrate addition intervals or mass flow rate, the methane production can be controlled also within conventional AD systems, but problems might occur due to substrate overload and quick acidification

. Fluctuating OLR and shock loadings in the hydrolysis stage were proven to have no influence on the total specific final product yields

. Secondly, the SCCA-rich effluent of the hydrolysis stage can be stored easily and fed to the second stage for gas-production on demand. As the hydrolysate mainly consists of readily degradable material, methane production can be raised within hours

. On-demand production of biogas was also shown for the lignocellulosic substrate grass silage by operational changes in recirculation

Overall, the optimization and control of microbial hydrolysis in a separate stage in anaerobic digestion offers many advantages and can reduce costs and environmental impact. More information on possible reactor configurations, process conditions and integration into biorefinery systems can be found in the Review of Menzel et al.