Gene expression is the process by which information encoded in DNA is transformed into functional products: either proteins or non-coding RNA (ncRNA) molecules. Gene expression is finely and dynamically controlled through the tightly coordinated and interconnected activity of multiple factors at different levels [1,2,3][1][2][3]. The first level of regulation is chromatin accessibility, which is determined by epigenetic marks: reversible modifications that, without altering gene sequence, determine chromatin structure and accessibility, leading to the activation or repression of transcription [4]. Transcription of both coding and non-coding genes begins with the recruitment of the RNA polymerase (RNA Pol) and the rest of the transcriptional machinery to the promoter region of the gene [5]. This is followed by the processing of the pre-messenger RNA (pre-mRNA) by splicing, which includes alternative splicing, so that different messenger RNAs (mRNAs) can be generated from the same pre-mRNA, widening the diversity of gene transcripts [6,7][6][7]. The mRNA is then directed to the cytoplasm, translated into an amino acid sequence in the ribosome and processed to produce a protein. Once the protein is generated, it can undergo a variety of post-translational modifications that determine its function, localization and half-life (Figure 1). The complexity and interconnection between the different levels of gene expression regulation are necessary to ensure the proper expression of genes in a cell-specific and temporal manner and, thus, guarantee cellular identity, function and viability [2]. 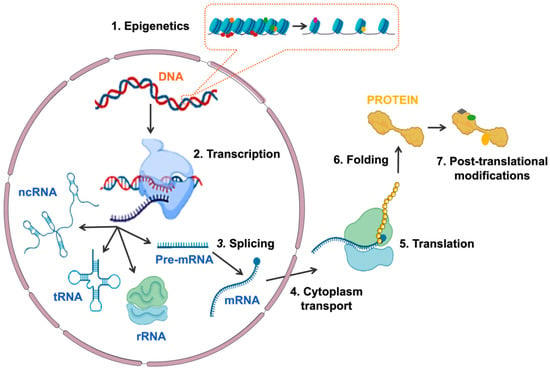 Figure 1. Schematic representation of the different mechanisms involved in regulating gene expression. The sequential regulatory events are: (1) epigenetics modifications at chromatin, (2) transcription of DNA to RNA, (3) splicing of pre-mRNA, (4) mRNA transport to cytoplasm, (5) translation of mRNA to protein, (6) protein folding and (7) protein post-translational modifications. Abbreviations: ncRNA, non-coding RNA; tRNA, transferring RNA; rRNA, ribosomal RNA; Pre-mRNA, pre-messenger RNA; mRNA, messenger RNA.
The splicing factor synergistic lethal with U5 small nuclear RNA, SLU7, was first described in 1992 in yeast as an essential player in the second catalytic reaction of the splicing process [8]. Subsequent works identified its human homologue and characterized its role in the spliceosome [9,10[9][10][11][12][13][14],11,12,13,14], highlighting that SLU7 controls the diversity of gene transcripts in a cell. In addition, more recent findings have identified SLU7 also involved in other levels of gene expression regulation [15,16,17,18,19,20][15][16][17][18][19][20]. Specifically, SLU7 has been implicated in the epigenetic remodeling of DNA, in the modulation of the transcriptional activity and in controlling protein stability. All these findings identify SLU7 as a pleiotropic factor with a holistic function at different levels of gene expression regulation [15,16,17,18,19,20][15][16][17][18][19][20].

Preliminary evidence of changes in SLU7 levels in a pathological condition was in the context of human inflammatory bowel disease [109][21]. SLU7 was found downregulated in the colonic mucosa of patients with ulcerative colitis independent of the inflammation status of the tissue. Remarkably, in the mucosa of patients with Crohn’s disease, SLU7 was downregulated in inflamed tissues but not in non-inflamed tissues [109][21]. Therefore, the different expression patterns of SLU7 in these two inflammatory bowel diseases pointed to SLU7 as a potential discriminator between ulcerative colitis and Crohn’s disease [109][21]. Additionally, genome-wide association studies (GWAS) identified SLU7 single-nucleotide polymorphisms (SNPs) associated with tobacco smoke risk for inflammatory bowel disease (rs41275313) [110][22].
Evidence demonstrates alterations in SLU7 expression in the liver during the development of liver injury. A significant reduction at the mRNA level [30][23], that has been recently confirmed at the protein level [19], was observed during the progression of human liver disease from cirrhosis to HCC as well as in mouse models of acute and chronic liver damage [19,30][19][23]. This downregulation was associated with the activation of ELK-1 upon binding of AREG to the EGFR and the sequential activation of JNK-1 [30][23]. Therefore, the induction of AREG expression in the liver in response to inflammatory signals [111,112][24][25] would explain the [96][26] downregulation of SLU7 after liver injury or during the process of hepatocarcinogenesis [15,19,113][15][19][27]. In contrast, hepatic SLU7 was reported to be upregulated in ethanol-fed mice and in patients with alcoholic steatohepatitis, although the underlying mechanism was not described [20]. The induction of SLU7 was also observed in the liver of mice fed a high-fat diet, which could be explained by the presence of insulin resistance, as insulin inhibits SLU7 expression during the physiological cycle of fasting and refeeding [15]. All in all, further studies are needed to clarify the regulation of SLU7 expression in the damaged liver.
Although no link between SLU7 and hematopoiesis has been made so far, SLU7 is located in the region of the long arm of chromosome 5 (from 5q14.1 to 5q35.1) frequently deleted in myelodysplastic syndromes (MDS) [114][28]; therefore, SLU7 downregulation would be expected in MDS. Additionally, SLU7 has been recently identified as a susceptible locus for systemic lupus erythematosus (rs1895321) [115][29]. Although these findings highlight the presence of alterations in SLU7 levels during various pathological processes, the implications of these changes in expression are, in most cases, unknown. Therefore, further experiments and studies are needed to find out whether SLU7 changes are implicated in other pathologies, to characterize the mechanisms governing SLU7 expression and to elucidate the role of SLU7 in disease, including liver disease, inflammatory bowel disease and myelodysplastic syndromes. Next, wthe researchers review the current knowledge of the implications of SLU7 in the context of liver diseases.

Given the role of SLU7 in the maintenance of hepatocellular identity [15], it is reasonable to speculate that the decreased expression of SLU7 observed during the progression of liver disease [19,30][19][23] could be involved in the de-differentiation of the hepatocytes and the loss of liver functions observed in patients, which is indicative of their bad prognosis. In fact, outhe researchers' results have demonstrated that Slu7 haploinsufficiency in mice is enough not only to exacerbate liver dysfunction and potentiate transcriptome rewiring, but also to sensitize the liver to both acute and chronic damage [19]. In fact, all the data concerning the different functions of SLU7 described above suggest that the reduction in SLU7 levels observed in the livers of patients [19,30][19][23] contributes to the process of hepatocarcinogenesis. Indeed, it contributes to the reactivation of oncofetal isoforms and proliferation genes [15[15][30],116], to the generation of oxidative stress and DNA damage [16], to the induction of genomic instability, both through aneuploidy and mutations [17[17][31],117], and to the general DNA hypomethylation [18,118][18][32] observed in patients during the process of hepatocarcinogenesis (Figure 52). 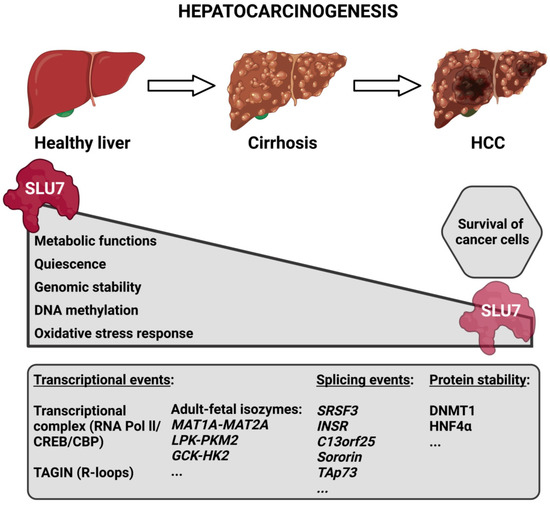 Figure 52. Schematic representation depicting SLU7’s involvement in the process of hepatocarcinogenesis. During the progression of liver disease, the expression of SLU7 decreases in parallel with the alteration of essential cellular functions. However, the residual SLU7 expression in tumoral cells is essential for their survival. The bottom box depicts some SLU7-controlled gene expression events that are altered during liver disease progression. Abbreviations: HCC, hepatocellular carcinoma; TAGIN, transcription-associated genome instability.
Moreover, it is important to note that the ourresearchers' results demonstrate that preventing SLU7 downregulation in damaged mouse liver cells helps to preserve the hepatocellular functions restoring hepatocellular differentiation and, importantly, protects the liver against chronic injury [19]. Therefore, these results reinforce the potential of differentiation therapies such as, for instance, HNF4α1 [119,120][33][34] or CBPα [121,122][35][36] restitution to treat liver diseases [29][37], presenting SLU7 as a new target.

Based on the demonstrated functions of SLU7, it is clear that SLU7 is required to preserve cellular homeostasis and genomic integrity. Accordingly, any situation favoring its downregulation could contribute to the process of carcinogenesis, as has been suggested in the liver. However, it is important to highlight that, perhaps due to these central and pleiotropic roles linked to cell proliferation, SLU7 is a non-redundant survival factor for human cancer cells of very different origins and does not affect the viability of normal cells [16]. Thus, in this proliferative context, SLU7 could help to secure cell cycle progression [16] and DNA methylation maintenance [18], the expression of survival oncogenes such as the microRNA cluster miR17-92 [16], and to limit the mitotic stress associated to R-loop accumulation [17].
Therefore, SLU7 could represent a cancer cell’s vulnerability, and the silencing of SLU7 could represent a new therapeutic strategy [16]. In fact, SLU7 knockdown could recapitulate many events that have been proposed separately as anti-cancer strategies, including global DNA demethylation [123[38][39],124], induction of R-loop formation [101[40][41][42][43],102,125,126], DNA damage [101[40][41],102], cell cycle arrest [127[44][45],128], mitotic stress [101[40][41],102], autophagy [129,130][46][47] and apoptosis [131,132][48][49]. Future studies should help to elucidate whether, as suggested, SLU7 represents a pan-cancer therapeutic target.