Data acquired from satellite sensors are widely used in the automatic detection of active wildfires. Fire detection techniques supported by such data provide the most feasible and practical means for the detection and continuous monitoring of regional and global fire activities [1]. Though data used in the design of satellite-based fire detection have been acquired from sensors onboard sun-synchronous Low Earth Orbit (LEO) systems (mainly polar satellites) and onboard Geostationary Earth Orbit (GEO) satellites, the thermal imagery data obtained from the global system of GEO sensors are the most appropriate satellite-based data for early fire detection in the non-polar regions of the earth. In near future, data acquired from the thermal sensors on  inclined highly elliptical orbits (HEOs), such as Molniya and Tundra orbits, will also provide data on temporal resolution scale same as GEO. The devastating effects of wildfires on land, atmosphere, flora, and fauna can be mitigated when wildfire outbreaks are timely detected to enable early interventions.

In thermal-based fire detection, satellites have relied on images received from the fire-sensitive Mid-Infrared (MIR) spectral window (i.e., 3−5 mm spectral range) to distinguish fire and non-fire pixels. This spectral region is highly sensitive to temperatures of subpixel vegetation fires and is less affected by solar reflections than the Shortwave Infrared (SWIR) spectral window. A pixel in a satellite image is directly or implicitly flagged as a fire pixel when the pixel’s observed temperature is significantly higher than its expected background temperature – the latter defined as the expected temperature of a pixel under non-fire condition. The first satellite-based remote sensing techniques for hotspot detection were developed using data from the LEO systems. Given the LEO system’s high spatial resolution advantage, the expected background temperature was extracted from spatial-contextual information (for example, see [2][3][4][5][6][7]). A pixel’s expected background temperature can also be estimated using a multi-temporal model for the evolution of a pixel’s temperature. It can also be defined using multispectral information either by assuming that the temperatures derived from the fire-sensitive MIR spectral window channel and temperatures derived from the earth surface-sensitive Long-wave IR (LWIR) spectral window channel during non-fire conditions are correlated or by performing spectral unmixing [8][9]. Since GEO fire-sensitive MIR data were available, most GEO-based fire detection techniques were conceived by adapting the pre-existing LEO methods on GEO data. These techniques used the same spatial-contextual information to define the expected pixel’s background temperature during fire detection [10][11][12][13][14] or fire confirmation [15][16][17]. A spatial-contextual mechanism has its drawbacks, such as Point Spread Function (PSF) effect, spatial heterogeneity, and undetected cloud-contaminated pixels that contribute to both omission and commission errors [1][18][19]. The performance of such techniques is also restricted by the low spatial resolution of GEO data. GEO sensors have a high temporal resolution, and exploiting the high temporal resolution enhances the chance of detecting a fire at ignition. Given that fires are generally small when started, the high-temporal data can then allow the detection of small and low-power fire events, typically only possible with the LEO system [20][21][22].

The current multi-temporal fire detection methods based on recursive Bayesian estimation, first derive the expected DTC of a day (i.e., the model of a day) online before the start of the day and data are assimilated at observation time into the expected DTC. The derivation of the expected DTC of a day allows only for the inclusion of recent observed DTCs with a short period of invalid data (cloud or fire-contaminated data or missing data) into the training set but observed DTCs with a long period of invalid data are not included. The model of a day is also expected to change with land cover (or land use) change, season, and even weather. Given that the model of a day is derived from previously observed DTCs, the required number of recent valid DTCs to include in the training set might not be available for a given period of no change in a pixel location. This approach, therefore, does not adapt rapidly to non-fire change on land or in the atmosphere, for example, in the aftermath of a fire on a pixel location. With the aim of rapid adaptation to normal change, a proposed method derives the background temperature by assimilating data into the model of DTC’s parameters of a pixel location each time valid observations are available to estimate the vector of the best DTC model parameters, which is the initial value of the forecast. The ensemble forecasting approach is applied from the data assimilation time for a skillful forecast that is used to determine the expected background temperatures of a pixel location onward. Two types of data are assimilated into the model of the DTC parameters at each data assimilation cycle, namely, the observed TOA brightness temperatures derived from the MIR window data and the observed offsets of the thermal sunrise (i.e., the start time of a DTC) of a day to the sunrise of the same day. The latter is assimilated to transition from one DTC to the subsequent DTC.

A proposed fire detection method achieves an early active fire detection by subtracting the observed temperature from the expected background temperature to obtain the prediction residual at an inspection time in a given pixel location. The residual value is compared to an adaptive threshold computed using a Constant False Alarm Rate (CFAR) framework to decide whether the pixel location is burning. To produce a smooth continuous data assimilation result in the temporal dimension, three data assimilation methods – each offering different assimilation advantages – were separately used. A variational data assimilation method, which emulates the weak-constraint Four-Dimensional Variational Assimilation (4D-Var) and is implemented only in the time dimension (one-dimensional analysis), performs a point estimation of the posterior. Two sequential data assimilation methods, namely the classical Ensemble Kalman Filter (EnKF) and Sampling Importance Resampling (SIR) particle filter, estimate the posterior probability density function. The three methods are compared in terms of detection performance that depends on their ability to estimate the dynamics of the background brightness temperatures. The expected background brightness temperature is the observational forecast determined through model integration from the initial state and defined at a given False Alarm Rate (FAR). Observational forecasts are assumed to be uncorrelated across spatial and temporal dimensions, and the same for real observations. The observational forecasts and real observations are also assumed uncorrelated, and as result, each pixel is assessed independently from its neighbors and only the temporal dimension used to compute the expected background temperature.

The proposed method has less computational complexity in terms of time than methods that rely on fitting past observations to a DTC model to determine the expected background temperature [29][31][34][35][36]. The computation time is reduced because the model fits are only required when the proposed detection system is launched to determine the initial values at launch. The proposed method is expected to achieve higher accuracy than that of other temporal fire detection methods because the estimation of background temperature is based even on the most recent non-fire observation without relying on the expected DTC of a day, and the detection uses a CFAR threshold to adapt to any non-fire condition in a single pixel location and to adapt to any region. Since the MIR spectral window is affected by solar reflections, cloud cover increases both omission and commission errors. Cloud detection and the masking of cloud-contaminated samples are usually undertaken as a pre-processing step, and fire detection results depend then on the accuracy and detection threshold of the cloud detection mechanism of choice. No step is taken to clear cloud samples from data in this proposed algorithm. The potential improvement to the proposed method includes the assimilation of data in more dimensions than just the temporal dimension and the assimilation of more types of data to better characterize the background temperature dynamics under cloud cover. The identification of a water body is implemented as a post-processing step. This is done to set water body pixels, which might have been falsely classified as fire or undecided, to a non-fire status.

GEO satellite temporal MIR data are assimilated into the model of DTC parameters of a pixel to describe non-fire background temperature dynamics to aid the early detection of wildfires. Temporal information incorporates land surface characteristics, but to also consider the weather and atmosphere, a combination of temporal, spatial, and spectral information must be assimilated into the background temperature model of a pixel. The figure below shows an example of the fire detection at 10-3.5 FAR that uses the 4D-Var with an assimilation window length equal to 6 samples to assimilate brightness temperatures acquired from the GEO sensor the Meteosat Second Generation (MSG)-SEVIRI into a DTC model[42]. Data correspond to an MSG pixel location whose center is at (25.02590 S, 31.27840 E). The sensor MODIS observes the pixel location four times a day. The MODIS MOD14/MYD14 fire product reports fire in the two DTCs of the examined MSG pixel location shown in the figure below on 2 August 2007 at 11:45 (six MODIS fire pixels whose centers fall in the MSG pixel, all with high detection confidence); and in the outer window of a 3 x 3 pixel array around the examined MSG pixel, on 2 August 2007, at 11:45 and during times of all MODIS night overpasses, and on 3 April 2007 during times of morning overpasses of both Terra and Aqua. A fire product that reports MSG fire pixels, namely EUMETSAT FIR, reports the fire in the pixel on 2 August 2007, first at 10:30 (reports the fire before Aqua overpass, i.e., before MODIS MOD14/MYD14 report) as a low-confidence fire event (i.e., possible fire), thereafter it reports probable (high confidence) fire events at 10:45, 13:45, 15:30, 16:30, 16:45, and 19:45 during the duration of the fire activity in the time frame shown in the figure below. In a 5 x 5 MSG pixel array around the examined pixel location, no MODIS MOD14/MYD14 fire reports before 11:45 and no EUMETSAT FIR fire reports before 09:45 on 2 August 2007. By assuming a single ignition time for the fire events of 2 August 2007 in the examined pixel, the fire detection at 10-3.5 FAR that uses the 4D-Var with an assimilation length equal to 6 for the analysis (results shown below) detected the fire ignition at the same time reported by EUMETSAT FIR fire product at 10:30. An example where the proposed algorithm detects the fire ignition at the same time as the EUMETSAT FIR report and at the time before MODIS MOD14/MYD14 report. The proposed method continues in this case to report fire uninterrupted while EUMETSAT FIR fire product misses some fire events. Noting that, on 1 August 2007 in a 5 x 5 array around the examined pixel, no fire was reported either by by EUMETSAT FIR report or MODIS MOD14/MYD14 report. 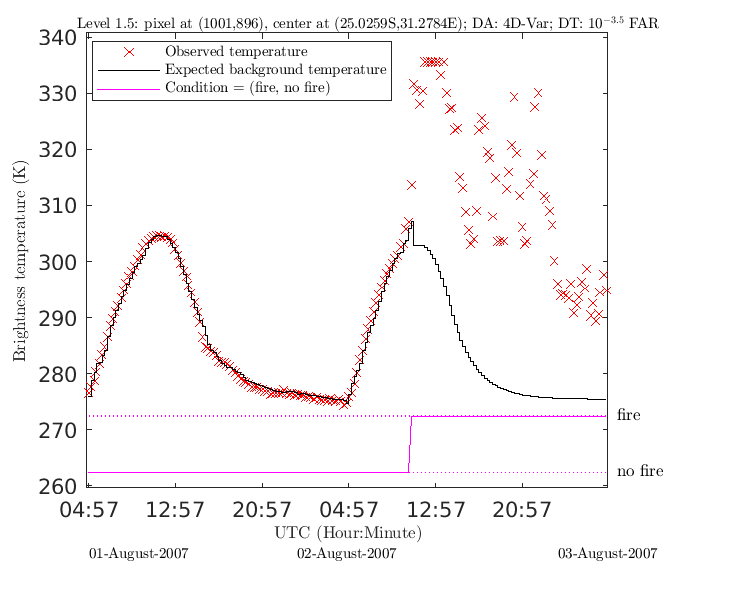 This figure serves as the graphical abstract of the manuscript accepted for publication in MDPI Remote Sensing journal. The texts in this review are mainly from the Introduction section of the same manuscript with few additions. All MSG Data © 2007 and 2020 EUMETSAT.