The skin is an extensive and dynamic system in which different living microorganisms (bacteria, fungi, viruses, and mites) populate not only the surface but also the deeper layers of the epidermis and dermis, as shown in Figure 1. The entirety of the population composes the microbiota [1,2,3][1][2][3]. This term refers to all commensal microorganisms, which are usually harmless [4], present in and on our bodies, such as in the intestine, nose, mucous membranes, scalp and skin. 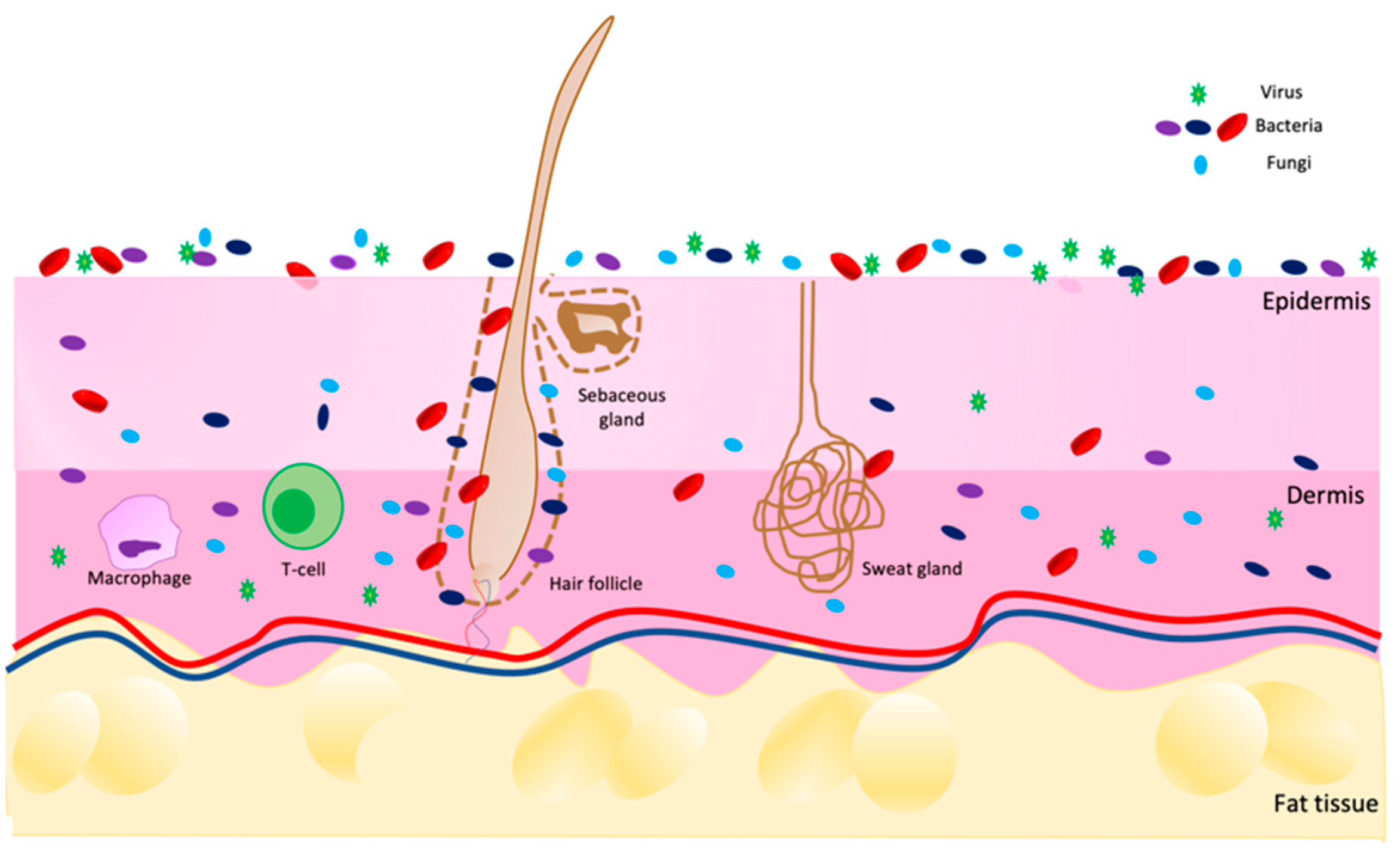 Figure 1. Scheme of skin microbiota distribution on skin in a healthy condition. Image built on Power Point software.
Their function is to defend our body from pathogens and to maintain good health over time [5,6][5][6]. To keep a good balance, it is necessary that different microbial communities participate in a symbiotic relationship with the host tissue, conferring it some benefits [7]. In fact, the microbiota includes two types of microorganisms: resident and transient. The first group represents the core of the skin environment, and they help to maintain healthy conditions. In fact, they are neither aggressive nor pathogenic, but they provide some benefits to the host, also preserving the skin barrier. The latter, as the name suggests, do not stabilize permanently, but remain on the skin for only a short period. Under normal conditions, they are not pathogenic.
However, exogenous and endogenous factors can perturb the bacterial flora, leading to changes in the relative abundance of normal commensals, and these could become opportunistic pathogens under the right circumstances [8], contributing to the symptoms [1,2][1][2] of diseases such as acne vulgaris (AV), atopic dermatitis (AD) and rosacea (RS) [9,10,11][9][10][11].
The distribution of the skin microbiota is not homogeneous, but it differs according to body areas and to skin characteristics. At the macroscopic level, wresearchers can subdivide moist, dry, and sebaceous environments. In the sebaceous areas, weresearchers find lipophilic bacteria such as Cutibacterium, which is able to grow well in anaerobic, lipid-rich regions (for example, the forehead and nose crease). In dry areas, on the other hand, Micrococcus, Streptococcus, and Corynebacterium prevail, such as in the upper buttock area and forearm.
At last, Staphylococcus and Corynebacteria species prefer moist areas, e.g., the armpit, inguinal fold and inner elbow [8,12][8][12].
If wresearchers consider smaller body regions, at the microscopic level (eccrine and apocrine glands, sebaceous glands, and hair follicles), more microbial heterogeneity is present. Cutibacterium species predominate, for example, in sebaceous follicles.
In addition to microbial heterogeneity, bacterial flora also varies from individual to individual by birth type. In the beginning, the fetus in utero is sterile, so the skin microbiota begins to develop at the time of birth. If the childbirth method is cesarean, then the newborn will have a microbial population similar to the mother, and species of Staphylococcus, Corynebacterium, and Cutibacterium will prevail. If, on the other hand, the childbirth is natural, then the baby will have a vaginal microbial set, such as Lactobacillus, Prevotella, and Sneathia [13].
Then, the enrichment of the microbiota continues with the lactation phase, during which the mother’s microorganisms try to reach all areas of the body, including hair follicles and then the scalp, in order to establish a healthy relationship with the skin cells of the host. Adulthood is then the final stage in which everyone will have their own bacterial flora that will not be static, but will change over time. These temporal changes are some other factors affecting interindividual and intraindividual variability. In a study conducted over the course of 4–6 months, it was observed that microbial dynamism was greater in dry environments than in mixed environments.
In addition, other factors that increase the variability of microbial flora are lifestyle, work, race and age. During puberty, young people have greater sebum production, which consequently correlates with a greater presence of lipophilic bacteria such as Cutibacterium.
Another aspect to consider is the environmental impact, including climate, temperature, and UV exposure. Indeed, UVA and UVB radiation are bactericidal [8,12][8][12].
Under healthy conditions, the most prevalent bacteria phyla are Actinobacteria, Bacteroidetes, Firmicutes and Proteobacteria; in particular, the three most common genera are Corynecateria, Cutibacteria and Staphylococci [13,14,15,16][13][14][15][16].
Among the commensal bacteria, the most representative are Cutibacterium acnes, Staphylococcus epidermidis and Corynebacterium jeikeium.
Cutibacterium acnes, a Gram-positive anaerobe bacterium, resides in the sebaceous areas of the body, such as the face, neck, hair follicles and sebaceous glands. Other species, such as C. avidum and C. granulosum, are also found, but in smaller quantities. Cutibacterium acnes is considered one of the main commensal bacteria of the skin; in fact, it metabolizes fatty acids with antimicrobial properties and contributes to maintaining the acidic pH of the skin. It also produces bactericides, preventing the growth of yeasts, molds and some Gram-negative pathogens. However, under certain conditions, some subspecies of C. acnes are implicated in acne (which will be further explained later in this article) [15,16][15][16].
Staphylococcus epidermidis, which is Gram-positive, belongs to the Firmicutes phylum. It is commonly found on the skin and is considered beneficial: it is able to secrete antimicrobial peptides (AMPs), such as epidermin and epilancin K7, which prevent the colonization of skin pathogens, including Group A Streptococci (S. pyogens) and S. aureus.
Corynebacteria, Gram-positive bacteria (phylum Actinobacteria), colonize moist or sebaceous sites and use lipids or vitamins from sweat to survive.
Members of this family include C. jeikeium; this is a commensal bacterium that, in much the same way as S. epidermidis, produces bacteriocin-like antimicrobial compounds, preventing the colonization of other potentially harmful species. In addition, C. jeikeium also produces superoxide dismutase, an enzyme that protects bacteria from superoxide radicals and simultaneously may prevent oxidative damage at the tissue level [17,18][17][18].
The skin microbiota does not include only bacteria but also fungi. Indeed, different studies have suggested that the most present fungi on the skin belong to the Malassezia species, such as M. globosa, M. restricta and M. sympodialis. The distribution of these microbes is body-dependent; for example, M. globosa lives on the back and occiput, whereas M. restricta is instead on the external auditory canal and retroauricular fold. Aspergillus, Rhodotorula, Cryptococcus and Epicoccum are present in other skin areas, such as foot sites [17].
The field of viruses, on the other hand, is not completely known. This may be due to the difficulty of sampling and sequencing them, for example, due to their size [18].

Atopic dermatitis is a chronic inflammatory skin disease in which the major symptoms are xerosis, dry itchy skin and eczema. In this condition, the skin barrier is compromised, and individuals are more exposed to secondary infections, penetration of allergens, and transepidermal water loss (TEWL) [17,18,19][17][18][19]. Moreover, other characteristics such as inflammation, immune dysregulation and filaggrin mutation can affect AD patients (Figure 2) [19,20,21][19][20][21]. 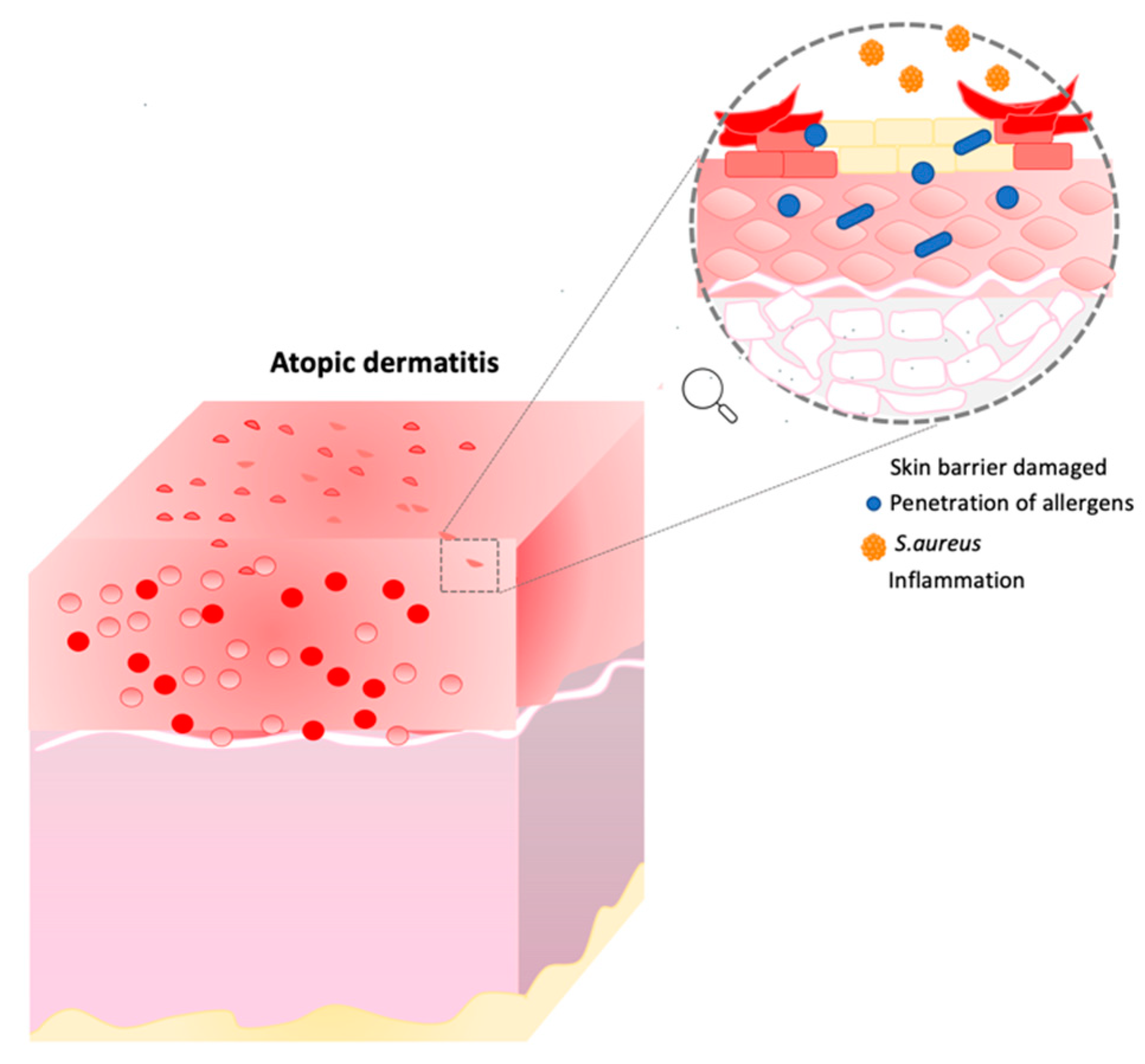 Among the causes wresearchers can find in AD patients, there could be a mutation in the gene (FLG) encoding for the protein filaggrin, localized on the short arm of chromosome 1q21 [22]. Filaggrin is a structural, S100 calcium-binding epidermal stratum corneum (SC) protein. It is involved in the normal SC function in terms of the hydration and maintenance of the skin barrier. It is also responsible for the binding of the keratin filament to produce micro-fibrils. During epidermal differentiation, its insoluble precursor, profilaggrin, is dephosphorylated and becomes more soluble [23]. Then, different proteases cleave the molecule into monomers, forming the final structure [6,24,25][6][24][25]. The role of FLG is to generate natural moisturizing factors (NMFs) and to provide a scaffold for the extracellular lipid matrix. If filaggrin is not synthetized correctly or if there is a mutation, then the differentiation of keratinocytes will be dysregulated, and the barrier will be compromised. Not only keratinocytes are involved, but lipid alteration, a reduction in moisturizing agents and barrier disruption are other characteristics present in AD. The consequence of these factors is that the skin is exposed to different infections and pathogens. Moreover, if the SC barrier is not structurally uniform, then keratinocytes are not able to create a compact layer, and for this reason, the epidermis will have an increase in transepidermal water loss (TEWL), while skin hydration and the level of NMFs will be lower [26]. It is important to point out that FLG mutations are neither necessary nor sufficient to cause atopic dermatitis; in fact, 60% of patients do not have this mutation [27]. Not only genetic mutations, but other effects, such as the inflammation process and microbiome imbalance, can also contribute to AD development.

AD is a combination of two pathologies: a skin barrier deficit, such as a filaggrin mutation, and an immune dysregulation. Different hypotheses have been reported; the first suggests that immunological aberrations are the primary phase leading to the development of the disease, with the skin barrier being affected. The second one states that a compromised epidermal barrier primarily leads to the onset of topical eczema and secondarily to immune dysregulation [28]. In particular, AD follows a two-step process: from an acute to a chronic state. In the initial, acute phase, T-helper 2 and T-helper 22 cell responses are increased in the skin, with some involvement of T-helper 17 cells. The mediators produced can influence skin inflammation, and they contribute to the impairment of the skin barrier. Moreover, they activate different cell types, such as keratinocytes, which increase skin inflammation through the release of proinflammatory cytokines. The disease continues its progression in a chronic manner, in which type 1 immunity prevails with Th1 pathways and a still important contribution from T-helper 2 cells [29,30][29][30].