Biosynthesis Pathway and Metabolism of Isoflavones

Isoflavones have been widely studied and have attracted extensive attention in fields ranging from chemotaxonomy and plant physiology to human nutrition and medicine. Isoflavones are often divided into three subgroups: simple O-substituted derivatives, prenylated derivatives, and glycosides. Simple O-substituted isoflavones and their glycosides, such as daidzein (daidzin), genistein (genistin), glycitein (glycitin), biochanin A (astroside), and formononetin (ononin), are the most common ingredients in legumes and are considered as phytoestrogens for daily dietary hormone replacement therapy due to their structural similarity to 17-β-estradiol. On the basis of the known estrogen-like potency, these above isoflavones possess multiple pharmacological activities such as antioxidant, anti-inflammatory, anticancer, anti-angiogenetic, hepatoprotective, antidiabetic, antilipidemic, anti-osteoporotic, and neuroprotective activities.

Plant secondary metabolites (natural products) are produced by the plant cells in plant–environment interactions through some metabolic pathways derived from the primary metabolic pathways. As the products of plant–environment interactions, some plant secondary metabolites function as phytoalexins or phytoantibiotics to protect plants from pathogens. Later on, researchers found that they had antibacterial, antifungal, and antiviral activities in humans. Scientists have continuously pointed out that plant secondary metabolites play important roles in plant physiology, plant pathology, human nutrition, and medicine. Plant secondary metabolites are represented by a variety of low molecular weight organic compounds. According to their structure, plant secondary metabolites are classified into several classes, such as terpenoids, glycosides, phenolics, and alkaloids [28,29][1][2]. Flavonoids are the largest and most studied subclass of the phenolics class among many plant secondary metabolites. According to the characteristics of chemical structure, flavonoids can be divided into two main groups: the flavonoids group (mainly including flavanones, flavanonols, flavones, flavonols, flavan-3-ols, flavan-4-ols, and anthocyanidins) and the isoflavonoids group (mainly including isoflavones, isoflavans, pterocarpans, and rotenoids). The structure of flavonoids comprises the 2-phenylchroman skeleton, which is a linear C6-C3-C6 skeleton derived from a phenylpropanoid (C6-C3) starter and three C2 elongation units. However, the structure of the isoflavonoids group comprises the 3-phenylchroman skeleton, which is derived from the 2-phenylchroman skeleton via an aryl migration reaction (Figure 1) [30][3]. Isoflavonoids have been widely studied and have attracted substantial attention in fields ranging from chemotaxonomy and plant physiology to human nutrition and medicine. In chemotaxonomy, isoflavonoids are recognized as chemosystematic markers due to their presence and distribution in different plants. In general, isoflavonoids are mostly found in legumes (Fabaceae family), such as Astragalus spp., Dalbergia odorifera T. C. Chen, Glycyrrhiza spp. (Licorice), Glycine max (L.) Merr. (soybean), Hedysarum multijugum Maxim, Iris spp., Lupinus spp., Medicago spp. (barrel medic), Pueraria montana var. lobata (Lour.) Merr., Sophora flavescens Aiton, and Trifolium spp. (clover). Occasionally, isoflavonoids can be found in 31 non-leguminous families, such as Asteraceae, Chenopodiaceae, Iridaceae, Moraceae, Myristicaceae, and Nyctaginaceae [31,32,33,34,35][4][5][6][7][8]. In plant physiology, isoflavonoids are considered as phytoalexins or phytoantiobiotics due to their antifungal and insecticidal properties. In human nutrition and medicine, isoflavonoids are known as phytoestrogens due to their structural similarity with 17-β-estradiol. So far, approximately 1600 isoflavonoids have been identified, seven subclasses (isoflavones, isoflavans, isoflavanones, isoflavanols, pterocarpans, coumestans, and rotenoids) are mainly mentioned, which are generated through the biosynthetic modification of core (general or central) phenylpropanoid pathways and downstream flavonoid/isoflavonoid branch pathways. In general, isoflavones are the most important and largest subgroup of isoflavonoids, and they often serve as precursors of other isoflavonoid phytoalexins such as isoflavans, pterocarpans, rotenoids, and coumestans due to their core isoflavonoid scaffold. According to the difference in the substitutions and the position of substitutions on the basic structural skeleton, isoflavones are often divided into three subgroups: simple O-substituted derivatives (i.e., hydroxy, methoxy, methylenedioxy, etc.), prenylated derivatives (i.e., prenyl, isoprenyl, etc.), and glycosides [31,32,33,34,35][4][5][6][7][8]. Among these three subgroups of isoflavones, simple O-substituted isoflavones such as daidzein, genistein, glycitein, biochanin A, and formononetin are the most common ingredients in the legumes used as daily dietary supplements. The glycosides of simple O-substituted isoflavones (daidzin, genistin, glycitin, ononin, and astroside) are more abundant than these aglycones in the legumes. Due to their structural similarity with 17-β-estradiol, these above isoflavones (simple O-substituted isoflavones, as well as their glycosides and metabolites) are considered to possess estrogen-like properties via binding to estrogen receptors (ERs), leading to the activation of estrogen-related receptor response elements (ERRE) located on the inner side of the nuclear membrane, and, in turn. promoting gene transcription processes. However, simple O-substituted isoflavones usually possess a higher affinity for ERs than their glycosides. As for the affinity of their metabolites for ERs, there is a large degree of variability. For example, the affinity of equol for ERs is greater than that of its parent isoflavone-daidzein, and almost equivalent to that of genistein. However, O-desmethylangolensin (O-DMA) has a weaker affinity for ERs almost equivalent to its parent isoflavone-daidzein. Hence, these simple O-substituted isoflavones and some metabolites are recognized as phytoestrogens for use as dietary estrogen supplements in alternative hormone replacement therapy [36,37,38,39][9][10][11][12]. Many researchers have studied the various pharmacological activities of these novel simple O-substituted isoflavones (daidzein, genistein, glycitein, formononetin, and biochanin A), their glycosides (including daidzin, genistin, glycitin, ononin, and astroside), and their metabolites (equol and O-DMA). These novel simple O-substituted isoflavones, as well as their glycosides and metabolites, possess many pharmacological activities similar to estrogen, including antioxidant, anti-inflammatory, anticancer, anti-angiogenetic, hepatoprotective, antidiabetic, antilipidemic, anti-osteoporotic, and neuroprotective activities. Some review studies on versatile pharmacological potential, anticancer, antidiabetic, and antilipidemic activities have been presented for individual isoflavones, such as soy isoflavones, genistein, genistin, formononetin, biochanin A, equol, and O-DMA [36,39,40,41,42,43,44,45,46,47,48,49,50,51,52,53,54,55,56,57,58][9][12][13][14][15][16][17][18][19][20][21][22][23][24][25][26][27][28][29][30][31]. However, there are very few review studies on the protective effects of these novel O-substituted isoflavones in cerebral IR (Figure 2). 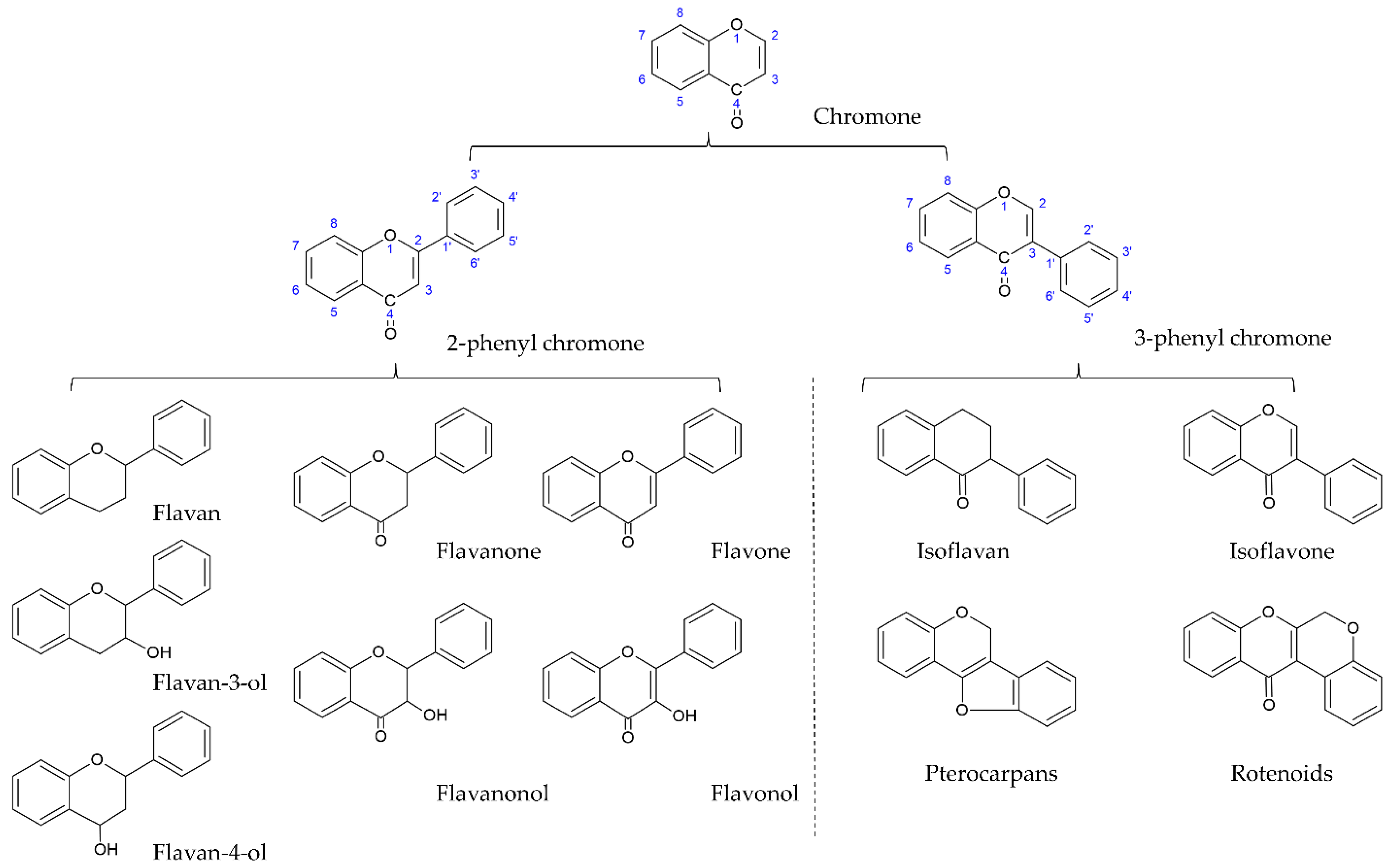 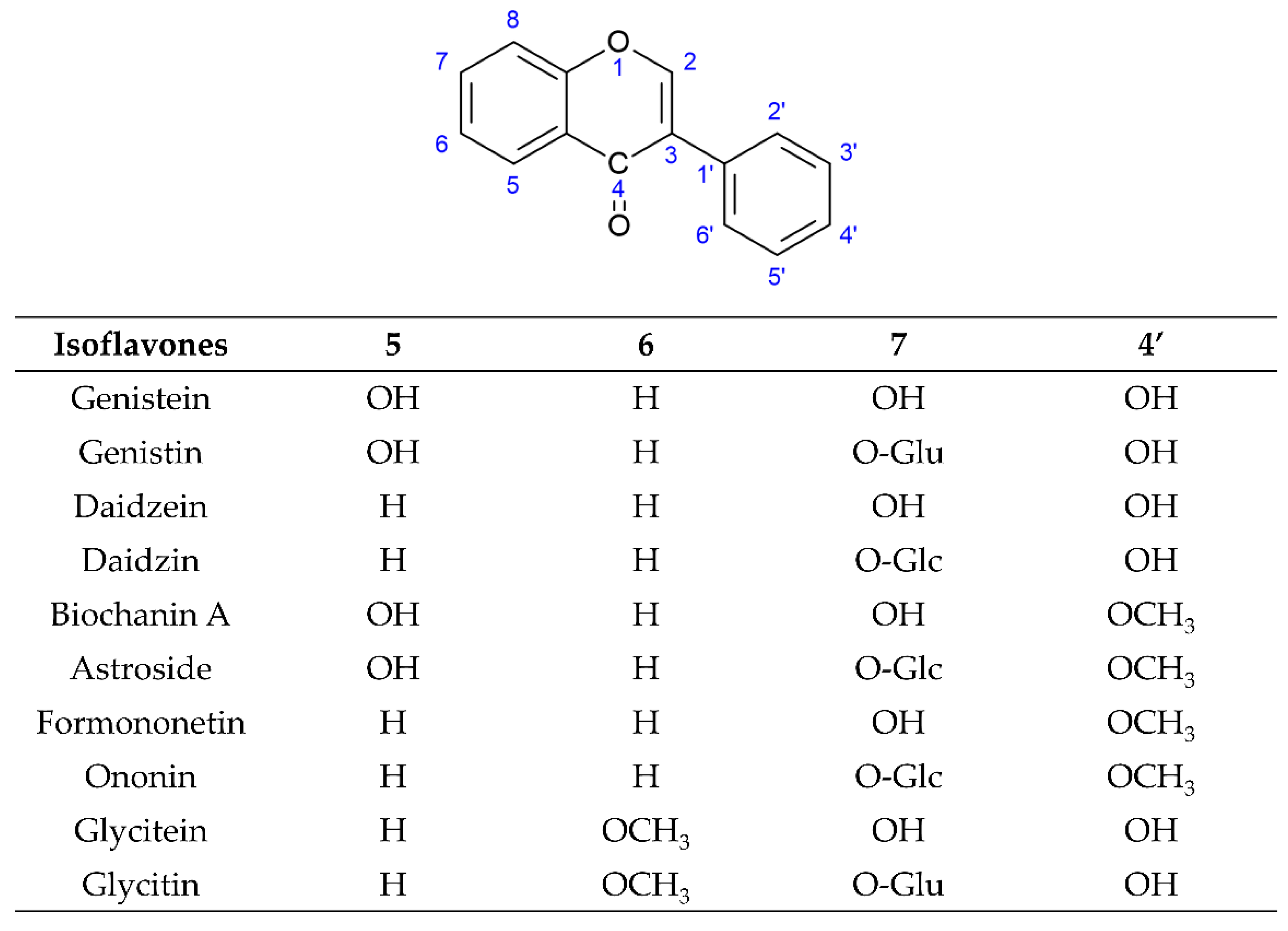 2. The Biosynthesis Pathway of Isoflavones

The biosynthesis pathway and related enzymes of isoflavones have been investigated extensively using biochemical and genetic methods. Nearly all enzymes in isoflavone biosynthesis have been isolated, and their structure and functional characterization are understood. Isoflavonoids are synthesized through the core phenylpropanoid pathway and downstream flavonoids/isoflavonoids biosynthetic branch pathway (Figure 3) [59,60][32][33]. 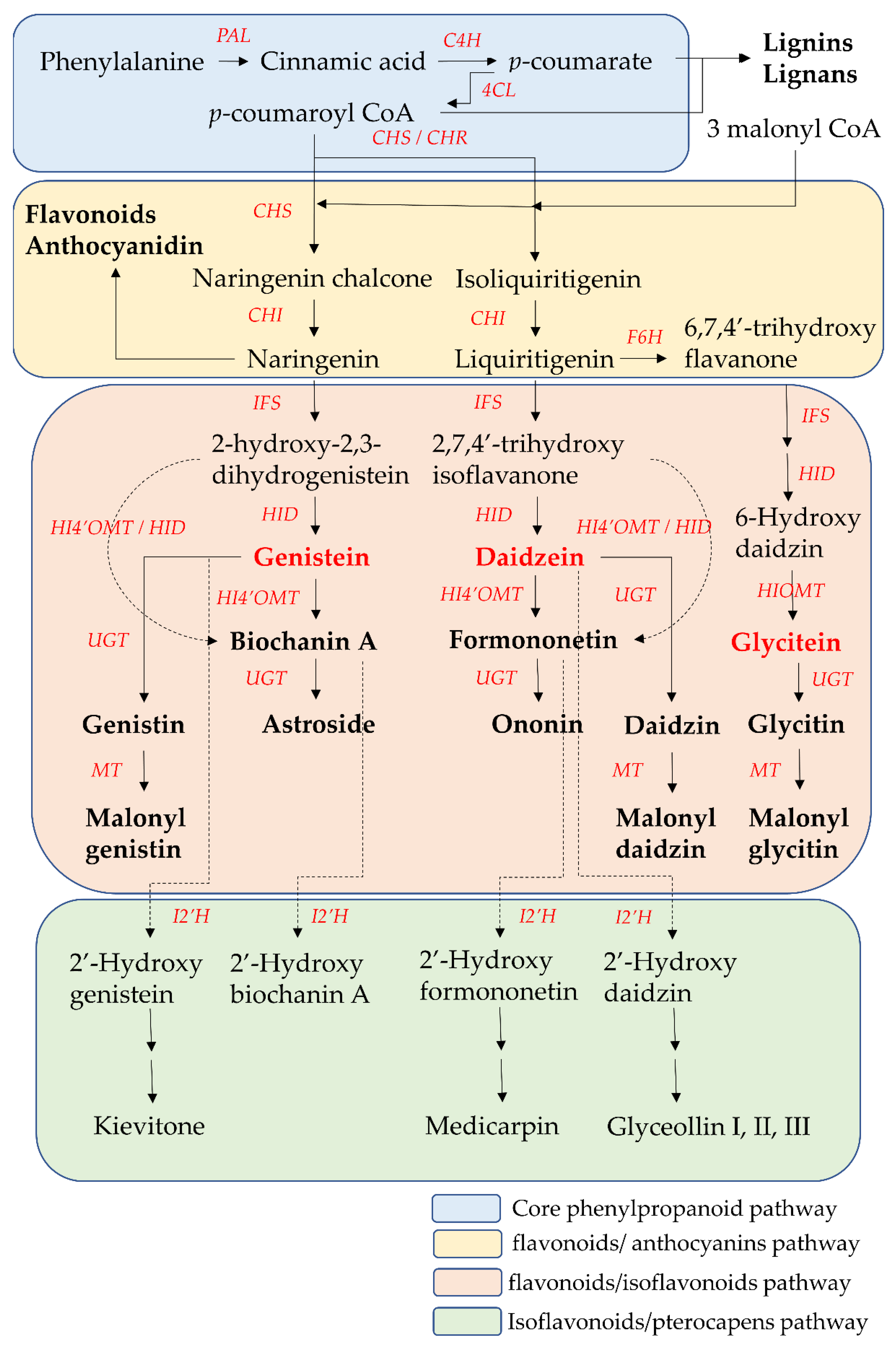 Figure 3. The core phenylpropanoid pathway and isoflavones biosynthesis pathway. 4CL, 4-coumarate CoA-ligase; C4H, cinnamate 4-hydroxylase; CHI, chalcone isomerase; CHR, chalcone reductase; CHS, chalcone synthase; F6H, flavonoid 6-hydroxylase; HI4′OMT, hydroxyisoflavanone 4′-specific O-methyltransferase; HID, 2-hydroxyisoflavanone dehydratase; HIOMT, hydroxyisoflavanone O-methyltransferase; I2′H, isoflavone 2′hydroxylase; IFS, isoflavone synthase; MT, malonyltransferases; PAL, phenylalanine ammonia-lyase. UGTs. UDP-glycosyltransferases.
The core phenylpropanoid pathway is an important metabolic pathway in plant–environment interactions, which produces secondary metabolites, such as flavonoids and isoflavonoids, from the main substrates, such as phenylalanine or tyrosine. In the initial step of the core phenylpropanoid pathway, phenylalanine (produced from the shikimate pathway) is deaminated by phenylalanine ammonia-lyase (PAL) into cinnamic acid, a precursor of various phenylpropanoids. Then, cinnamic acid is hydroxylated into p-coumarate by cinnamate 4-hydroxylase (C4H). In the final step of the core phenylpropanoid pathway, p-coumarate was converted to p-coumaroyl-CoA by 4-coumarate CoA-ligase (4CL). p-Coumaroyl CoA is at the junction of the downstream biosynthetic branch pathways leading to flavonoid/isoflavonoid/pterocarpan biosynthesis, to flavonoid/anthocyanin/condensed tannin biosynthesis, or to lignin/lignan biosynthesis [61,62][34][35].
Chalcone synthase (CHS) is the first committed enzyme of the flavonoid/anthocyanin/condensed tannin and flavonoid/isoflavonoid branch pathway. CHS catalyzes the formation of a tetrahydrochalcone–naringenin chalcone (4,2′,4′,6′-tetrahydroxychalcone) from one molecule of p-coumaroyl-CoA (produced from the core phenylpropanoid pathway) with three malonyl-CoA molecules (produced from acetate pathway) through the stepwise condensation. This naringenin chalcone is catalyzed by chalcone isomerase (CHI) to form one flavanone–naringenin (5,7,4′-trihydroxy-flavanone) through intramolecular cyclization. This step is recognized as one branch of the flavonoid/isoflavonoid/pterocarpan biosynthesis pathway, but it is a common step in most plants. The other branch of the flavonoid/isoflavonoid/pterocarpan biosynthesis pathway is carried out via the co-action of CHS and legume-specific chalcone reductase (CHR) in most legume species. One trihydroxychalcone isoliquiritigenin (4,2′,4′-trihydroxychalcone) is formed from one molecule of p-coumaroyl-CoA and three malonyl-CoA molecules, which are catalyzed by CHS and CHR. Then isoliquiritigenin is also transformed into one flavanone liquiritigenin (4′,7-dihydroxyflavanone) by CHI. The two flavanone intermediates-naringenin and liquiritigenin are successively converted into 2-hydroxyisoflavanones (2-hydroxy-2,3 dihydrogenistein and 2,7,4′-trihydroxyisoflavanone) by isoflavone synthase (IFS, also called 2-hydroxyisoflavanone synthase (2-HIS)) through the aryl migration reaction of the aromatic B-ring from the C-2 to the C-3 position and hydroxylation at the C-2 position. Then the intermediate 2-hydroxyisoflavanones are dehydrated by 2-hydroxyisoflavanone dehydratase (HID) to form the corresponding isoflavones (genistein and daidzein) through the formation of a double bond between the C-2 position and C-3 position of the C-ring. On the other hand, liquiritigenin is first converted into 6-hydroxyflavanone (6,7,4′-trihydroxy flavanone) by flavonoid 6-hydroxylase (F6H). Then, 6,7,4′-trihydroxyflavanone is gradually transformed into 6-hydroxydaidzein by IFS and HID [59,60][32][33].
These two isoflavones (genistein and daidzein) are precursors of other isoflavone derivatives because they have a core isoflavone scaffold. They undergo a variety of modification reactions, such as methylation, acetylation, hydroxylation, glycosylation, and malonylation. Among these modification reactions, O-methylation often occurs in the early stage of the flavonoid/isoflavonoid/pterocarpan biosynthesis pathway. This modification increases the lipophilicity of isoflavones and reduces their chemical reactivity, leading to an increase in their antimicrobial activities and their use as phytoalexins for disease resistance in the plants. The most common site of methylation is at the 4′ position of isoflavones. Hydroxyisoflavanone 4′-specific O-methyltransferase (HI4′OMT) catalyzes the transfer of a methyl group to a specific hydroxyl group of these two isoflavones (genistein and daidzein), forming biochanin A and formononetin. Biochanin A and formononetin are also produced from the catalysis of 2-hydroxy isoflavanone (2-hydroxy-2,3 dihydrogenistein and 2,7,4′-trihydroxyisoflavanone) by HI4′OMT and HIS. On the other hand, 6-hydroxydaidzein is also modified by hydroxyisoflavanone O-methyltransferase (HIOMT) to form glycitein. Additionally, glycosylation is the most frequently occurring and most extensive modification of isoflavones. This modification often reflects the interaction between plants and symbiotic or pathogenic microorganisms, and these glycosylated isoflavones are often one of the constitutive storage forms of isoflavones that accumulate in the central vacuole or other compartments. Hence, the content of glycosylated isoflavones (isoflavone glycoside) is higher than that of their aglycone forms in some plants. This modification alters their solubility and chemical properties, leading to different bioavailability, pharmacokinetics, and biological activity toward human health relative to aglycone forms. UDP-glycosyltransferases (UGTs) catalyze the addition of the glycosyl group from a nucleotide sugar (such as UDP sugar donors) to an isoflavone aglycone. Hence, the two core isoflavones (genistein and daidzein) and two 4′-methoxy derivative isoflavones (biochanin A and formononetin) undergo 7-O-glycosylation by UGTs and produce isoflavone 7-O-glycosides, such as genistin, daidzin, astroside, and ononin. Glycitein also undergoes 7-O-glycosylation by UGTs to form isoflavone 7-O-glycoside glycitin. Malonylation follows the process of glycosylation, potentially preventing the enzymatic degradation of the glycosylated isoflavones through altering their lipophilicity. Hence, malonyl isoflavones are also among the constitutively storage forms of isoflavones. Genistin, daidzin, and glycitin are further converted into their respective malonyl derivatives—malonyl genistin, malonyl daidzin, and malonyl glycitin by malonyltransferases (MTs) [59,60,63][32][33][36].
When plants are exposed to some stress factors, such as pathogens, UV radiation and high metal salts, pterocarpans are synthesized from core isoflavones such as daidzein, formononetin, and genistein. These above isoflavones are first converted into 2′-hydroxyisoflavones by isoflavone 2′-hydroxylase (I2′H), and then catalyzed by a series of various enzymes to form various pterocarpans in various plants. For example, daidzein is finally metabolized into glyceollin I, II, and III through the formation of intermediate metabolite 2′-hydroxydaidzein in soybean. Formononetin is finally metabolized into medicarpin, glycinol, and pisatin through the formation of intermediate metabolite 2′-hydroxyformononetin in Medicago truncatula Gaertn. [64][37].

3. The Metabolism of Isoflavones 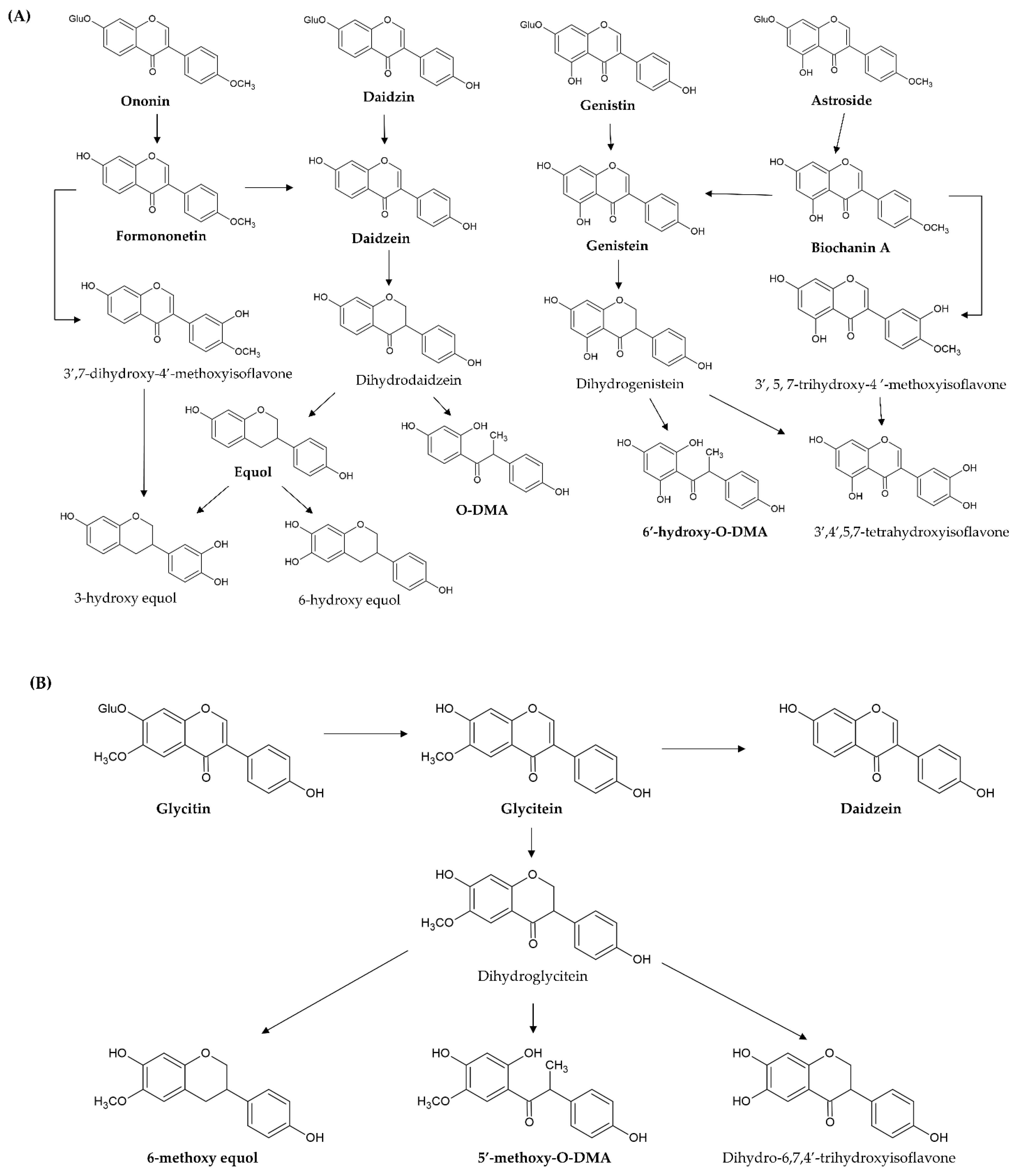