Lichens have long been considered as composite organisms composed of algae and/or cyanobacteria hosted by a fungus in a mutualistic relationship. Other organisms have been gradually discovered within the lichen thalli, such as multiple algal species, yeasts, or even viruses. Of pivotal relevance is the existence of the lichen microbiome, which is a community of microorganisms that can be found living together on the lichen surface. This community performs a growing number of functions. In this entry, we explore the journey of lichens being considered from a dual partnership to a multi-species symbiotic relationship.

symbiosis;microbiome;partnership;mycobiont;photobiont;holobiont;bacterial layer
Lichens are just one of many symbiotic relationships that can be established between heterotrophic fungi and photoautotrophic partners, such as plants, mosses, cyanobacteria, and algae. Partnerships between fungi and vascular plants are highly diverse and ecologically relevant. Some of these partnerships, such as those of ectomycorrhizas [1], endomycorrhizas, or the unique orchid mycorrhizal associations [2], are well known. The relationships between fungi and cyanobacteria or algae are also well known and very diverse, including the relation between algicolous fungi and bacteria or algae [3] and lichens [4]. Algicolous fungi can parasitize algae or cyanobacteria [5][6][5,6] or alternatively can establish a mutualistic relationship, as in the case of mycophycobioses [7]. Lichen-forming fungi may establish symbiotic relationships with algae or cyanobacteria and form a unique identity, i.e., the lichen. However, although unique, lichens are just one example of the highly diverse partnerships between fungi and photosynthetic organisms.
More than 18,000 fungal species, comprising a highly diverse group and representing around 20% of those currently identified, participate in lichen partnerships. They occur in all terrestrial ecosystems, ranging from polar to tropical areas and from coastal to high mountain ecosystems. Lichens form vegetative structures called thalli and can grow on a large variety of substrates such as minerals, rocks, bare soil, and the wood or leaves of plants, even in streams and marine zones [8], as well as on synthetic material surfaces.
The symbiotic condition of lichens remained unknown for a long time and, until 1869 [9], they were thought to be individual organisms. The German mycologist Anton de Bary introduced the term “symbiosis” to describe the condition of dissimilar organisms living together [10] supporting Schwendener’s theory that lichen is formed by two separate organisms, a fungus and an alga. From then on, lichens were considered to be an obligate partnership between a fungus (mycobiont) and either cyanobacteria and/or green algae, that acted as a photoautotrophic partner (photobiont) [8][11][8,11]. Figure 1 shows the location of the mycobiont and the photobiont within heteromerous lichens, in which the algae and fungal components are arranged in definite layers. The stability of this symbiotic association depends on the mutualistic–antagonistic relationships of a multitude of interlinked organisms, also known as the “holobiont” [12][13][12,13]. This complex relationship is determined by the symbionts’ interactive intimacy, stability of environmental conditions, and partner availability [14][15][14,15]. 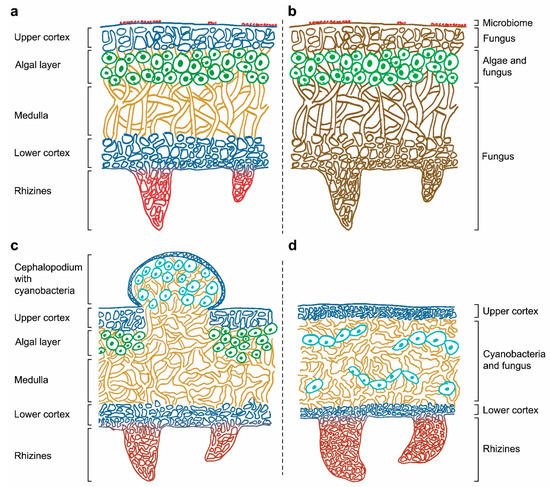 Figure 1. (a) Correspondence between the lichen structure and (b) their individual components in a heteromerous thallus. Depiction of tripartite lichen (c) and homoiomerous lichen (d).
Thalli are specialized structures unique to lichen-forming fungi and are not observed when the mycobiont grows in isolation. The thalli hold the photosynthetic partners and are one of the most complex structures in the entire fungal kingdom. Thallus structures are mainly determined by the fungal partner and can be grouped into three main growth forms: crustose, foliose, or fruticose. Crustose lichens, lacking the lower cortex, are completely attached to the substrate, while foliose and fruticose lichens are only partially attached through anchor like structures such as rhizines and hapters [16]. The internal space of the thallus can be made up of either an internal stratification with a fungal upper layer and underlying algal layer (heteromerous, Figure 1a), or an even distribution of the mycobiont and photobiont (homoiomerous, Figure 1d). Lichens do not have a waxy cuticle to isolate the thalli from their surroundings and therefore everything in the lichen’s environment is absorbed into its structure, including water and nutrients coming from air and rain. They also lack vascular tissues (such as xylem and phloem in plants) to distribute nutrients and water around their thalli.
The general structure of a heteromerous lichen is shown in Figure 1 and it is mainly composed of layers of fungus and alga. The upper cortex is the outer layer of the lichen thallus, and it is formed by the mycobiont. The cells in this layer are tightly packed to provide certain physical and chemical protection from the environment. The algal layer contains the photobiont, which frequently is a green alga. Cyanobacteria, if present, can be located in small vacuoles called cephalopodiums, which exist on top of the upper cortex or within the tissues of the lichen when there is a green algal layer already present (secondary photobiont, Figure 1c), or in a layer under the upper cortex (primary photobiont). Part of the lichen thallus is composed of filamentous fungal cells that form the medulla. This layer is loosely packed and has a threadlike structure. The lower cortex, with a similar structure to the upper cortex, protects the medulla and give support to the rhizines or other basal attachments that allow lichens to get linked to their substrate. Rhizines are fungal multicellular structures originated on the lower surface with no vascular purposes: no water or nutrients can be absorbed by them, and their unique function is to support the lichen attachment. Although this is the most frequent structural organization found in a thallus, some lichens present no distinguishable layers of mycobiont and photobiont. In these cases, the components are distributed in one big uniform layer, resulting in a gelatinous growth form (Figure 1d).
Most lichen-forming fungi belong to the phylum Ascomycota, while only 0.3% of lichenized fungi are known to be derived from Basidiomycota [8][17][8,17]. The majority of lichen-forming algae belong to the green algae (85%), and 10% have a cyanobacterium as primary photosynthetic partner, but also brown or yellow-green algae have been identified in these relationships [18][19][18,19]. Sexual reproduction of the fungal partner involves the growth of fruiting bodies from the thallus which produce ascospores to be dispersed. In addition to this sexual mechanism, lichens have also developed other processes of asexual reproduction to disperse both partners together in varied and specific joint propagules [16].
© Text is available under the terms and conditions of the Creative Commons Attribution (CC BY) license (http://creativecommons.org/licenses/by/4.0/)
Help
Top