While the use of alien insect species for food and feed can help to alleviate protein shortage and provide for a more sustainable feed production, their invasive potential should be considered.

The current prediction of human population increase (estimated in more than 9 billion by 2050) urges the need to provide sufficient nutritious food for all. That edible insects could help to ease future global food shortages and that WHO and FAO should support the use of insects as a food item was first suggested in 1975 by Meyer-Rochow in Australia

The current prediction of human population increase (estimated in more than 9 billion by 2050) urges the need to provide sufficient nutritious food for all. However, the need to increase food production does not come cheap, as the availability of natural resources, arable land, and natural stocks are decreasing

[1]. However, the need to increase food production does not come cheap, as the availability of natural resources, arable land, and natural stocks are decreasing

. More recent estimates suggest that food production will have to increase by 60% to feed everyone

[2]. More recent estimates suggest that food production will have to increase by 60% to feed everyone [3].

2. The Potential of Native Species

Most of the insect species produced for both livestock feed and exotic pets’ food are known to be exotic in regions such as Europe. They have some advantages when compared to native insect species, such as well-established rearing protocols for mass production and extensive studies to improve their productivity and potential to replace mainstream ingredients in formulated animal feeds (e.g., fish meal in aquafeeds). Nonetheless, native insect species are still interesting alternatives that are worth exploring, considering both the possible impacts caused by the escapes of exotic insects from pet shops and rearing facilities and the levels of some key nutrients on their biochemical profiles (e.g., PUFA). Both strengths and weaknesses, as well as opportunities and threats of using exotic or native species of insects as livestock feed are discussed below using a SWOT analysis (Figure 1). 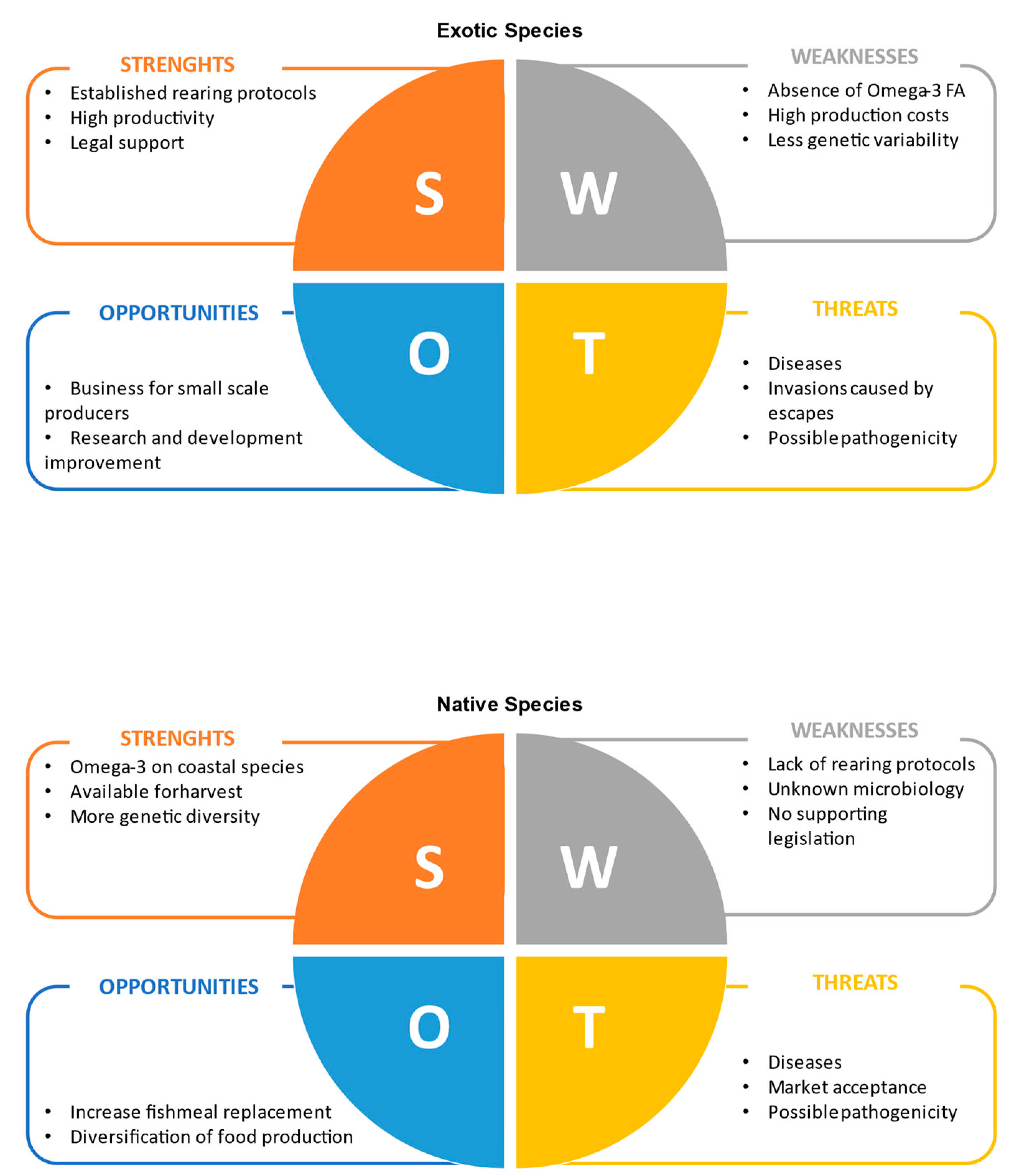 Figure 1. SWOT analysis (strengths, weaknesses, opportunities, and threats) associated with the use of exotic and native insect species for livestock feed and exotic pets’ food.
Exotic species demand a higher energy supply for climatic control due to their need for higher temperature, namely when species originate from tropical regions (e.g., BSF). The use of native species can help to overcome challenges that the industry of formulated feeds currently faces associated with the diversification of omega-3 sources to manufacture aquafeeds for marine organisms. The production of native species still lacks several studies, for instance regarding their microbiological content (particularly on Salmonella sp. or Escherichia coli, as their presence would make these species unsuitable for use as livestock feed ingredients). However, it is important to highlight that bacterial hazard for humans and animals related to insects originate from its rearing conditions, substrate, feed, handling, and processing, which needs to be carefully monitored to reduce the potential of these insects’ species to act as vehicles of known zoonotic pathogens. Despite this, the presence of bacterial pathogens for animals found in substrates do not seem to replicate actively in insects, emphasizing the importance of substrate selection [5554]. In Europe, one of the conditions to produce an insect meal for animal feed is that the target species cannot be listed as invasive according to the Regulation (EU) No 1143/2014 of the European Parliament and of the Council of 22 October 2014. This constraint is also an advantage to those advocating the use of native insect fauna to produce insect meals. However, the establishment of rearing protocols can be time consuming and financiallydemanding, considering that it can take hundreds or even thousands of generations to attain a desirable lineage, optimal for mass production, with individuals resistant to high density production and disease [2625]. These features are already displayed by the insect species currently approved by the EU, due to decades of rearing, namely BSF which has been used for long in forensic entomology. Some of the species that hold potential to be used as feed already have well-established protocols for laboratory-scale culture that can be upgraded for industrial uses. Regarding the legal framework in the EU on the production of insects for livestock feed, is currently limited to eight species (H. illucens, M. domestica, T. molitor, A. diaperinus, A. domesticus, G. sigillatus, G. assimilis, B. mori) considering that the origin of the substrate used for feeding the insects is not agricultural waste, or insects from the same species. The permission to use these insects as ingredients for formulated feeds employed in poultry and swine production was recently approved by the Commission Regulation (EU) 2021/1372, following the authorization of insects in aquaculture animals (EU reg.2017.893) and pet which was already permitted. Other countries outside the EU (e.g., the USA and Brazil), current regulatory guidelines for the production of insects for livestock feed do not have a specific legislation. These fall under the novel foods category, meaning that rules that apply are those for any other food operator, considering that its production, packaging, transportation, and storage fall under the good hygiene conditions and that products are properly labelled [5655]. The production of native insect species can increase the biodiversity of food production, which today is considerably low, if one considers that only a dozen of species of animals provide up to 90% of all of the animal protein consumed globally and just four crop species provide half of all plant based calories for human diets [5756]. Moreover, the production of native insect species can help to overcome the challenges of inbreeding, which reduces the intraspecific genetic variability, possibly making farmed populations more susceptible to disease that can cause significant economic losses [5857]. Moreover, the insect production for livestock feed and pet’s food, faces the challenge of the possible allergenicity carried by the presence of IgE Immunoglobulin or tropomyosin, which is known for causing allergic reactions for human consumers, but also for pets such as dogs [58][59][60]. In addition, insects can accumulate heavy metals in their tissues if these are present in their feeding substrates (e.g., cadmium from wheat, rice, mussels and corns), as well as pathogens from the rearing environment, which must be carefully considered when rearing insects for feed [6160].