The skin is the largest organ of the human body, serving as an effective mechanical barrier between the internal milieu and the external environment. The skin is widely considered the first-line defence of the body, with an essential function in rejecting pathogens and preventing mechanical, chemical, and physical damages. Keratinocytes are the predominant cells of the outer skin layer, the epidermis, which acts as a mechanical and water-permeability barrier. The epidermis is a permanently renewed tissue where undifferentiated keratinocytes located at the basal layer proliferate and migrate to the overlying layers.

AQP1 is found in dermal fibroblasts and vascular endothelial cells and has also been detected in melanocytes, located in the SB of the epidermis [1][37]. The main function of AQP1 is played in the vascular endothelial cells, where it mediates the exchange of water between the blood and dermis to maintain hydration. Less well elucidated is the physiological meaning in fibroblasts and melanocytes. In fibroblasts, AQP1 has been found to be upregulated during periods of hypertonic stress [2][38]. A similar increase in AQP1 expression has been postulated in melanocytes during conditions of osmotic stress; however, further work is needed [3][39]. AQP1-mediated water transport has also been suggested to occur in keratinocyte migration. Cell migration was restored in keratinocytes derived from AQP3-deficient mice by infecting the AQP1-depleted cells with either AQP3 or AQP1 [4][40]. The influx of water through either AQP1 or AQP3 was speculated to provide the hydraulic pressure needed to extend processes for cell movement [4][40].

AQP3 is expressed in keratinocytes from the SB to the SG of the epidermis where it is localized at the plasma membrane (Figure 1). 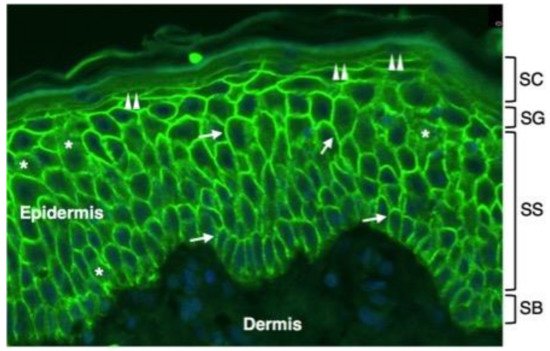 Eccrine sweat glands are composed of single tubular structures containing acinar cells and ductal cells. Mouse, rat, and human eccrine sweat gland secretory and excretory cells express AQP5 that, upon stimulation, traffics at their apical membrane [43][44][45][36,77,78]. Acinar cells secrete a primary fluid rich in ions and water whose composition is modified by reabsorption by the ductal cells [46][79]. The role of AQP5 in eccrine sweat glands remains an open debate due to variable data acquired with different AQP5 knockout mice strains and methods to assess the secretion [43][47][36,80]. Zhou and coworkers are the unique authors detecting AQP5 in keratinocytes where they suggested a role for this AQP in the balance between epidermal keratinocyte proliferation and differentiation [48][81]. However, further studies are needed to evaluate if the expression of AQP5 in keratinocytes in vivo is physiologically relevant and, eventually, clarify its role in the epidermis.
The presence of AQP5 in human axillary sweat glands has been reported, and upregulation of this orthodox AQP was detected in axillary sweat glands of primary focal hyperhidrosis (PFH) patients. PFH is a sweat disorder characterised by excessive sweating in specific body areas, such as the palms, axillae, feet, or forehead, where the eccrine sweat glands are concentrated [49][82]. This is consistent with a work by Ma and coworkers who used a mouse model and reported that topiramate reduced sweat secretion along with a diminished AQP5 expression by sweat glands, suggesting that AQP5 may be involved in topiramate-induced hypohidrosis [50][83]. These observations conflicted with a previous study where no significant difference in AQP5 expression was observed in the palmoplantar skin of healthy subjects and patients with a form of palmoplantar hyperhidrosis [51][84]. Thus, the main role of AQP5 in human sweat glands remains to be fully clarified; further investigation is needed to increase the understanding of the pathogenic mechanisms of hyperhydrosis and the hypothesized implication of AQP5.

Dendritic cells (DCs) feature the ability to present antigen and exert a critical role in the induction of the acquired immune response. The immune system of the skin relies on a rich network of antigen-presenting DCs that localise in the epidermis and the dermis. Skin DCs are distinct into three subsets, epidermal Langerhans cells (LCs) and Langerin- or Langerin+ dermal DCs (dDCs). LCs and dDCs uptake antigen and subsequently migrate to regional draining lymph nodes, where they activate naive T cells by initiating the immune response. A study using AQP7-deficient mice and isolated LCs and dDCs from mouse skin found that AQP7 is functionally expressed in mouse LCs and dDCs and plays roles in antigen uptake, cell migration, and the subsequent initiation of an immune reaction [52][35]. AQP7 was suggested to play an important role in allergy induction and immune surveillance in the skin and, likely, in other tissues in which DCs are localized.

AQP9 is a homologue of AQP3 with broad selectivity and is predominantly expressed in leukocytes [53][85] and the liver [26][61]. AQP9 was detected in the upper SG of the human and mouse epidermis [54][86]. AQP9 knockout mice did not show any apparent defect, including wound healing [54][86]. AQP9 mRNA expression was only detected in cultured, differentiated normal human epidermal keratinocytes [55][87]. Stimulation with retinoic acid, a potent stimulator of keratinocyte differentiation, increased AQP3 expression and downregulated AQP9 expression, suggesting that AQP9 expression in epidermal keratinocytes undergoes a different regulation compared to that of AQP3 [56][88]. The treatment of cultured keratinocytes with the keratinocyte differentiating agent VD3 also significantly increased AQP9 expression, an observation that has led to the hypothesis that AQP9 plays a role in highly differentiated keratinocytes. In human epidermis, AQP9 and occludin, a tight junction marker, co-localize in the upper stratum granulosum [56][88]. Considering that tight junctions function as a paracellular barrier against small molecules, besides having a role in the terminal differentiation of keratinocytes, another function for AQP9 in human epidermis may be that of constituting a transcellular route for the movement of solutes of biological relevance, such as glycerol and urea, into and out of the skin.
The involvement of neutrophil AQP9 in hapten-induced contact hypersensitivity has been shown in a murine model of skin allergic-contact dermatitis using Aqp9−/− knockout mice [57][89]. AQP9 was therefore suggested to be required for the development of sensitization during cutaneous acquired immune responses via regulating neutrophil function.

AQP10 is another aquaglyceroporin detected in the epidermal keratinocytes. By in vivo studies, AQP10 has been localized to the SC of the human epidermis [58][90]. AQP10 is believed to share similar meaning as AQP3, as it may play a role in the barrier function of the skin due to its expression in the SC [3][58][39,90]. The involvement of AQP10 in the pompholyx has also been suggested [59][91], although further studies are needed to precisely address this possibility.
© Text is available under the terms and conditions of the Creative Commons Attribution (CC BY) license (http://creativecommons.org/licenses/by/4.0/)
Help
Top
Feedback
Feedback
Help Center
Browse our user manual, common Q&A, author guidelines, etc.
Rate your experience
Let us know your experience and what we could improve.
Report an error
Is something wrong? Please let us know!
Other feedback
Other feedback you would like to report.
Did you find what you were looking for?