Unlike arboviruses, which have a dual-host tropism by cycling between vertebrate hosts and arthropod vectors, ISVs replicate exclusively in arthropod populations, causing a persistent viral infection, as such they are mainly maintained in nature by vertical transmission route. ISVs are also refereed to as mosquito-specific viruses as they are generally identified and discovered in mosquitoes. They are nonetheless an important part of the mosquito microbiome. The first ISV identified is cell-fusing agent virus (CFAV), which was isolated from an Aedes aegypti (Ae. aegypti) cell culture.

Since the discovery of CFAV, wild mosquito populations have been shown to act as a reservoir for a wide variety of ISVs, which suggests a significant heterogeneity among these viruses. These viruses are characterized by their competency to replicate in their vectors, while their replication are restricted in vertebrate cells.[1] Thanks to the advent of next-generation sequencing applications and advanced bioinformatics tools, metagenomic studies in this scope have identified a large number of ISVs harboring wild-caught mosquitoes over wide geographical areas (reviewed in [2]). Phylogenetic analyses based on sequence identities between ISVs and other mosquito-borne viruses suggest strong evidence that ISVs may be ancestral to arboviruses. Thereby, ISVs could serve as a model to study arbovirus evolution and their transition from single- to dual-host identity.

ISVs have been classified within multiple different taxa, mostly in the family Flaviviridae and the order Bunyavirales (Table 1). The Togaviridae, Rhabdoviridae, and Mesoniviridae also contain a smaller number of ISVs, as well as other taxa.[3]

Table 1. Classification of some insect-specific viruses.
1

The host range of insect-specific viruses identified up to date. N/A the vector species of ISV are not determined yet.

The vertical transmission routes (transovarial or transovum transmission) are considered the primary means by which ISVs are maintained and propagated in their vector populations.

They have also been shown to be venereally transmitted, yet to a lesser extent.

In addition, ISVs such as Eilat virus (EILV) and Negev virus could be experimentally transmitted to adult mosquitoes via a high-titer of an infectious blood meal.

Viral tropism is fundamental to consider with regards to host restriction of ISVs. It is defined as the ability of a particular virus to productively infect and replicate in a specific cell type, tissue, or species.[25] Viral tropism is determined by host cell susceptibility and permissiveness. For an efficient viral replication cycle in the host cell, the virus should be able to interact with multiple host factors at each step of its replicative cycle and to antagonize the host immune response that hinders its replication. Consequently, ISVs must overcome several integrated bottlenecks present at different levels to potentially emerge as a new dual-host virus: their genetic determinants, the vertebrate host factors, and the host microenvironment needed for efficient replication (Figure 1) (reviewed in [1]). 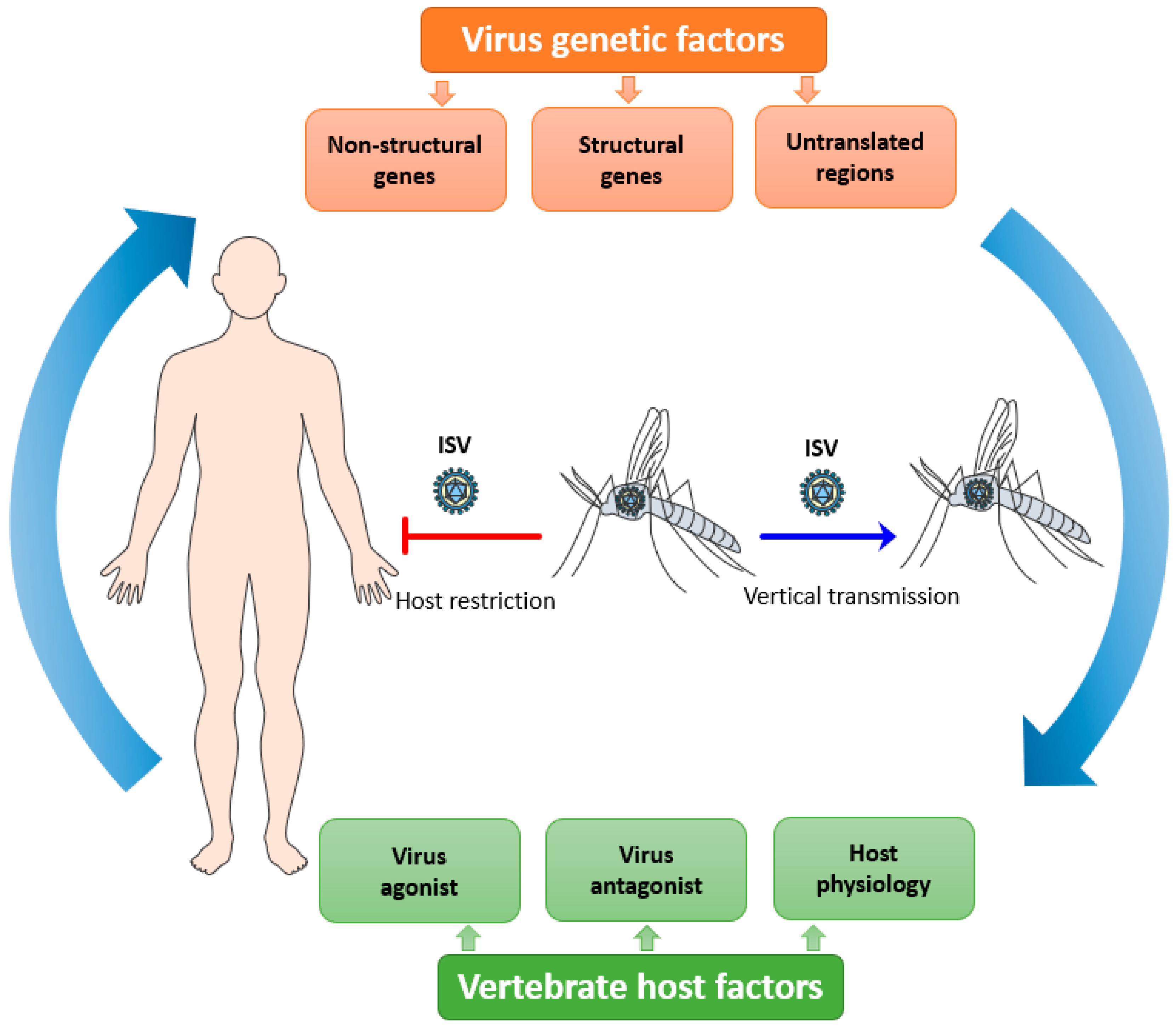 Figure 1. Putative overview of the host tropism of insect-specific viruses (ISVs). ISVs are maintained in mosquito populations by a vertical route of transmission. The infection and replication of ISVs are restricted in vertebrate hosts due to the complex interplay between multiple viral, host, and microenvironmental factors.

Figure 1. Putative overview of the host tropism of insect-specific viruses (ISVs). ISVs are maintained in mosquito populations by a vertical route of transmission. The infection and replication of ISVs are restricted in vertebrate hosts due to the complex interplay between multiple viral, host, and microenvironmental factors.

Since ISV discovery in natural mosquito populations as circulating viruses more attention has been given to their role in modulating pathogenic arbovirus transmission. Recently, different studies have focused on ISV interactions with dual-host arboviruses by investigating the phenomenon of superinfection exclusion, reviewed in

. Accordingly, ISVs can modulate the replication or dissemination of dual-host viruses in their competent vectors.