Financial assessment of renewable energy projects is to help decision-makers invest in renewable energy sources (RES) technologies, it is essential to have reliable indicators capable of measuring a project’s total performance. Despite the global increase in renewable energy sources (RES) investments associated with economic and population growth, few studies have presented a comprehensive evaluation mechanism for RES projects, mainly due to the multiplicity of variables capable of influencing the viability of these endeavors. Therefore, building models that allow an efficient and holistic measurement is a difficult task.

The development of tools for valuing renewable energy-generation projects is essential to encourage the undertaking of these initiatives. The study of RES represents a relevant field of research not only because of the foreseen technical developments but also because of the multidisciplinary approach needed to assess these projects from the social, environmental, and financial perspectives. The doubts about the feasibility of continuous investments in energy infrastructure based on fossil fuels have contributed to stimulating new frontiers for studies related to renewable energy projects [1][3].
Most large RES projects are financed in the Project Finance category and have a high demand for long-term capital. The main characteristics of this type of financing structure is the use of the project’s own cash flow and the creation of a specific and legally independent company, the Special Purpose Vehicle (SPV), to carry out the project [2][4]. Several methods can be used to measure the financial performance of a project, such as its cash flow analysis, revenue evolution, market share growth, among others. However, the option for project finance to finance large projects in renewable energy generates additional transaction costs due to the complexity of its formatting. This reality requires an additional effort for identifying methods capable of efficiently measuring its performance [3][5].

To help decision-makers invest in RES technologies, it is essential to have reliable indicators capable of measuring a project’s total performance, comparing it with the feasibility of other alternatives. Several tools are used to measure the feasibility of RES projects. For example, Ramadan et al. [4][13] applied net present value (NPV) combined with an annual Return on Investment (ROI). NPV can also be used as a standalone tool or combined with the Internal Rate of Return (IRR) [5][14]. Carneiro and Ferreira [6][15] also explored the use of NPV associated with IRR and Payback Period (PBP) while Talavera et al. [7][16] applied NPV with IRR and Levelized Cost of Electricity (LCOE). Although most of the current studies on the feasibility of RES projects are based on the use of more than one indicator, the classic NPV has been the most popular indicator for evaluating investments in general [8][9][17,18]. However, the long-term investment characteristic of RES projects can compromise the reliable application of traditional indicators to measure viability [10][11][19,20]. The NPV represents the total value of the project at the current value, considering a discount rate that reflects the risk at which the investor demands to be remunerated [12][21]. NPV is considered the most theoretically reliable tool from a financial perspective since it measures value creation [8][17]. Another indicator widely used in RES projects is the IRR, expressed by the interest rate for which the project’s NPV is zero. When the future cash flows of a project are discounted using the IRR, the present value of cash outflows equals the present value of cash inflows [13][22]. IRR is generally used with the NPV in the evaluation of projects [14][23]. Ref. [15][24] discussed the IRR and argues that joint with NPV, it represents the second measure of the project profitability. It is based on a non-dimensional scale while NPV represents a monetary quantity. The Payback Period (PBP) is an indicator that aims at expressing the time to recover the investment in a project. The PBP is the number of years or months necessary for the gross value of the inputs and outputs to be equal [7][16]. PBP can be used with or without considering the time value of money. When this is taken into account, the method is called the Discounted Payback Period, otherwise is frequently called Simple Payback Period. Despite its easy understanding and usability, PBP disregards existing cash flows after the investment is recovered, and is a very limited tool for decision making [16][25]. Another approach to measuring the feasibility of RES projects is based on cost analysis. In this approach, it is possible to identify the concepts of Cost of Electricity, also called Cost of Energy (COE) [17][26] or Levelized COE (LCOE) [18][27], defined as the average cost ($) per kWh of energy produced by the system [19][28]. Aussel et al. [20][29] claimed that the LCOE indicator is widely used for energy projects, and Siddaiah and Saini [21][30] highlighted LCOE as the preferred indicator for minimizing the lifecycle cost of a project. Although several studies are adopting the present value view of project costs, [22][31] demonstrated that LCOE represents not a discounted metric but rather an undiscounted metric. Moreover, the author argues that the present value approach of costs excessively penalizes projects with a longer life cycle. However, the LCOE remains a fundamental metric widely disseminated among the energy industry, academics, and organizations (see, for example, [23][24][25][26][32,33,34,35]. The ROI, defined as the annual cost saving over the invested capital [19][28] or as the annual average net profit over the invested capital [27][36], is also a common criterion used for analyzing the economic viability of RES projects [19][28]. Although ROI is strongly linked to NPV in investment valuation [8][17], some studies use these two indicators as complementary metrics [27][36]. Other papers highlight that the ROI parameters may not incorporate the time value of money [28][37], and, for this reason, the metric could be used as an independent financial parameter. A variation of ROI is the Energy ROI (EROI), defined as the proportion of the plant’s usable energy over the energy invested in the plant [29][38], which will not be considered in this paper. Given the need to value the managerial flexibility of projects in light of a future of uncertainty and change, some tools can be explored. Real options analysis (ROA), which seeks to price the future uncertainty of these projects, can be used as an indicator that complements traditional metrics based on a deterministic cash flow [30][39]. The real options theory has been applied with increasing frequency to the evaluation of RES projects [31][32][33][40,41,42]. Decisions are assumed to be fixed in the traditional analysis of investments through discounted cash flow, not allowing managers to expand or retract investments beyond the initial project estimate [30][39]. The term real options is used to express the options that are embedded in investment opportunities, such as suspending, postponing, or abandoning the investment, and reducing or expanding the scale of operations [34][43]. ROA can be considered a complementary tool in the analysis of project feasibility. Ref. [32][41] compared the traditional NPV method to the expanded NPV method that considers the flexibilities of a specific project. The authors concluded, as expected, that the value of NPV using ROA is greater than the traditional calculation since a real option can give flexibility and then add value to the project. Table 1 summarizes these project evaluation techniques including the simplified equations for their calculation and some of the main related concepts/ideas. Although different categorizations of the financial evaluation methods have been proposed in the literature [35][20][36][37][9,29,44,45], in this paper those methods are grouped in four categories, for the qualitative analysis purpose: (i) Traditional Project Evaluation Methods (TPEM), expressed by metrics that evaluate the viability of projects by discounting cash flows: NPV, IRR and Payback period; (ii) Cost analysis approach, represented by the Levelized Cost of Energy (LCOE); (iii) Return on Investment (ROI); and (iv) Real Options Analysis (ROA) that takes into account in the decision-making process the managerial flexibility associated with the investment decision.
Table 1.
Project Valuation Techniques. 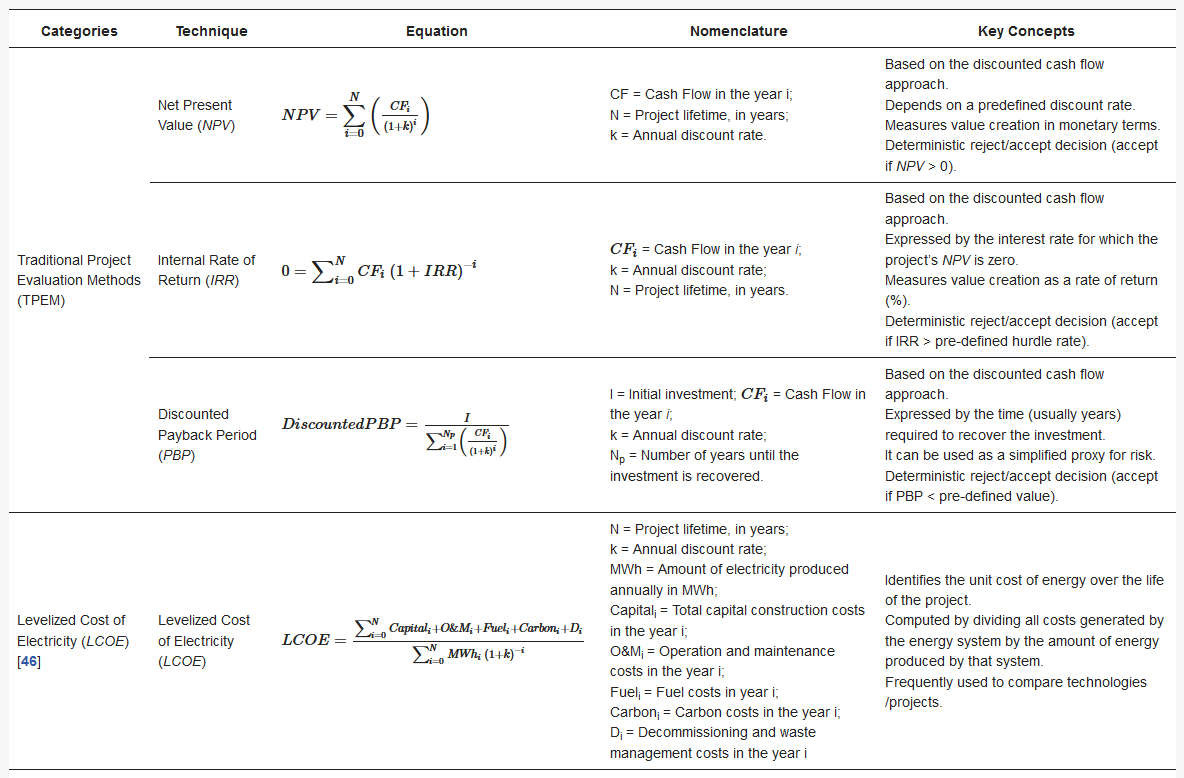 In summary, some critical points can be highlighted:

In summary, some critical points can be highlighted:

Herein identified that, in the context of scientific papers, the most widespread RES projects are related to wind and solar energy.
The most traditional tools used to evaluate RES projects are more popular in solar energy than wind energy while more complex mechanisms such as ROA are more widespread in studies related to wind energy. The dissemination of instruments and techniques to measure the uncertainties related to the incidence of winds can explain this empirical evidence.
From a geographical point of view, looking at author affiliations, the most traditional techniques are more common in publications from countries such as the USA, Italy, Spain, and Germany, while Asian countries, such as China and South Korea, have higher scientific production involving the technique based on real options.
The critical analysis provided some future research directions. Future research could analyze how these RES evaluation techniques vary and how they can be associated with other techniques to build more reliable and effective performance indicators. In fact, only about 23% of the reviewed studies seem to show some interlinkage between each other somehow overlooking the complementarities of these indicators. In particular, the use of TPEM with ROA is well established, but LCOE is still frequently used as an independent method that could benefit from integration in more holistic studies, for example addressing uncertainties of the energy markets and technology development.
Although the linkage between financial studies and well-established RES technologies is evident, additional research is required to address promising new RES technologies or emerging enabling technologies. For these innovative projects, risk and flexibility-related approaches are particularly relevant, and ROA can bring important insights. However, the use of ROA is still limited, which may derive from the perceived complexity of application and interpretation, particularly for lay people/investors. As such, future studies should focus on identifying factors that prevent greater dissemination and usability of more complex investment appraisal methods and even promote a “user-friendly” approach to these methods.
© Text is available under the terms and conditions of the Creative Commons Attribution (CC BY) license (http://creativecommons.org/licenses/by/4.0/)
Help
Top
Feedback
Feedback
Help Center
Browse our user manual, common Q&A, author guidelines, etc.
Rate your experience
Let us know your experience and what we could improve.
Report an error
Is something wrong? Please let us know!
Other feedback
Other feedback you would like to report.
Did you find what you were looking for?