Unlike the 2D cultures, which grow by attaching to the bottom as a monolayer, 3D cell culture refers to cells aggregated and expressed as a single tissue or form. Moreover, the 3D-cultured cells are attached to an artificially created ECM environment to interact with or grow with the surrounding environment. Therefore, unlike 2D cell cultures, cell growth in a 3D environment allows cells to grow in multiple directions rather than in a single direction in vitro, which is similar to in vivo conditions. Upon comparison, the 3D cell culture exhibits several advantages: (1) A similar biomimetic model, which is more physiologically relevant. (2) A 3D culture exhibits a high level of structural complexity and maintains homeostasis for longer. (3) 3D models can indicate how different types of cells interact. (4) 3D cultures can reduce the use of animal models. (5) They are a good simulator for the treatment of disease groups including cancer tumors.

Anchorage-independent 3D cell culture is a non-adherent cell culture system that is collectively referred to as a liquid-based system [45][1]. This system maintains cancer cells in a suspension to generate a self-assembly of tumor cells into a compact 3D aggregate known as a tumor spheroid or a cancer spheroid. Its main feature is that it enables the exchange of culture media to a certain point, although sophisticated handling is necessary due to the absence of an anchorage system to seize tumor spheroids. There are two pivotal liquid-based systems: (1) hanging-drop culture technology, (2) rotary-based culture system using spinner flasks and rotation culture system (RCCS) [46,47,48,49][2][3][4][5].

MCTs can be easily formed using non-adhesive cell culture methods such as the hanging-drop method or centrifugation of cells in a suspension culture method [46[2][6],50], in which the cells in the suspension culture medium are located at the bottom due to the presence of a meniscus in the middle layer [51][7]. Conventional approaches to generate cancer cell aggregation are hindered by variations in the cell number and spheroid size, high-shear force, and their labor-intensive nature [52][8]. Recently, different microfabrication methods, including microfluidics and microwell, have exhibited the potential to form a large number of well-organized spheroids. Zhao et al., (2019) first introduced a 3D-printed hanging-drop dripper (3D-phd) device that enables long-term production of uniform cancer spheroids (Figure 21) [28][9]. In addition to culturing MCF-7 and MDA-MB-231 human breast cancer cells, this device performs a series of biomedical assessments, including imaging analysis, gene expression mapping, and anticancer drug assays. They proved that this device has some merits such as ease of design to perform 3D tumor migration analysis and can extend to organ-on-chip engineering, as well as assessing the anticancer drug efficiency on the co-culture spheroids. Some use the microfluidic technology, which is useful owing to its simple operation and enables point-of-care testing. Through this method, Park et al., (2020) devised a finger-actuated microfluidic device for spheroid cultivation and analysis that facilitates programmed media exchange and media injection for further analysis [29][10]. Different sizes of BT474 spheroids were generated after seven days of growing and further analyzed in a LIVE/DEAD assay, indicating its spheroid growth in a manipulated ECM-mimicking environment. The proposed microfluidic-based device can be widely applied in biomedical laboratories by combining it with automated machinery. For the formation of the MCTs, the manipulation of cell size uniformity and long-term cultivation is difficult to control. To overcome this limitation, thermoresponsive copolymers with a poly(N-isopropylacrylamide) (p(NIPA)) backbone were manufactured [30][11]. In this study, small-size spheroids of human breast adenocarcinoma cells were generated up to 2000 cells per drop. This demonstrated the superior performance of an in vivo 3D cell culture system. Through an immunofluorescence assay with the LIVE/DEAD analysis, these spheroids exhibited suitable drug penetration, making it a proper model for future drug-screening platforms. Hanging-drop is a conventional technology and has some limitations: (1) drops may fall off by mistake and (2) large amount of cells cannot be contained in one drop [53][12]. 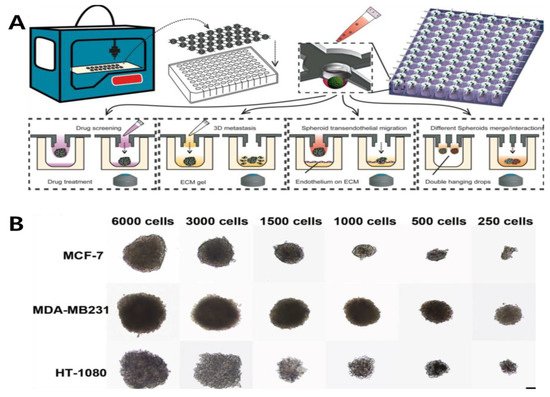 The rotary cell culture system (RCCS) is a typical 3D cell culture system that involves both suspension and anchorage-independent cells. It is designed as a bioreactor system to simultaneously incorporate the ability to culture multiple types of cells with low turbulence and high mass transfer of nutrients. Jiang et al., (2019) investigated human MDA-MB-231 breast cancer cells in the RCCS to examine microgravity on the ultrastructure [31][13]. They aimed to determine the changes in the apoptosis, ultrastructure, and cycle progression for seven days. Through this trial, they pioneered new mechanisms and methods for preventing cancer cell metastasis and provided a deeper understanding of the treatment of malignant tumors. Recently, the RCCS bioreactor has been widely accepted as a microgravity simulation device. In one study, Chen et al., (2020) manipulated human HGC-27 gastric cancer cells cultured in an RCCS bioreactor system by simulating weightlessness [32][14]. Under this system, the effects of simulated microgravity (SMG) on the RCCS bioreactor were examined using liquid chromatography-mass spectrometry. Through this trial, the RCCS proved the importance of SMG, which has a major impact on lipid metabolism in cancer proliferation. This might be a novel target for treating gastric cancer disease. The RCCS enables uniform size and morphology of the spheroids. However, if the rotational speed is too high, the shear force becomes strong, which can affect the physiological response of the cells [54][15].

Mimicking the tumor microenvironment in culturing 3D cancer spheroids is the foremost consideration for guiding a successful 3D cell culture technology. Some studies utilize biomaterials to confine and attach cells three-dimensionally, such as encapsulating cells in hydrogels or growing cells in scaffolds [55,56,57,58][16][17][18][19]. Biomaterials are widely designed to facilitate cell adhesion, differentiation, and proliferation. They may comprise natural polymers, such as gelation, alginate, hyaluronic acid (HA), chitosan, and collagen or synthetic polymers, such as polycaprolactone (PCL), poly-L-lactic acid, poly (ethylene glycol) (PEG), polydimethylsiloxane (PMDS), and poly (lactic acid-co-caprolactone). A liquid mixture of the ECM can also be added directly to the culture media or numerous other ECM coating protocols can be employed to aid cell adhesion and stabilize cell aggregation to from 3D spheroids [59][20].

A porous scaffold exhibits the following characteristics: porosity, pore size, morphology, which influences nutrient uptake for cell proliferation [60,61,62,63][21][22][23][24]. It has been widely accepted as a biodegradable polymer-based scaffold in tissue engineering; therefore, it needs to exhibit mechanical strength and flexibility [64][25]. Zhang et al., (2019) proposed a scaffold-based 3D cell culture system exploiting conductive polymer [33][26]. The importance of incorporating electroconductive material lies in its capability to sense electrochemical signals in a 3D cancer spheroid in a promising biocompatible polymer-based scaffold. A 3D porous PDMS scaffold was utilized to provide a favorable environment for a 3D cell culture. Then, a 3D PCP/Pt scaffold and PDMS scaffold were fabricated that exhibited stability and effectiveness in the 3D cell culture and tissue engineering. These scaffolds performed reactive oxygen species (ROS) monitoring of cancer cells, indicating great promise for future biomedical research. Different applications of the porous scaffold have been reported, which involved incorporating aerogel films and through pattering technology. Or et al., (2019) exhibited aerogel films with covalently cross-linked cellulose nanocrystals (CNCs) of designated dimensions and internal porous structures (Figure 32A) [34][27]. The usage of aerogel films has some merits in accelerating diffusion and reaction kinetics as a highly efficient catalyst matrix. Optimization of aerogel thickness and micropatterning were performed, and confocal imaging of human prostate cancer epithelial (PC3) cells showed its biocompatibility. In this work, they demonstrated an aerogel-based porous scaffold for a successful 3D cell culture technology.

Fibrous type scaffolds are an attractive biomaterial in tissue engineering owing to their ECM-mimicking structures, such as fibrous proteins, that exist in a native ECM [65,66][29][30]. Depending on the cell type, the fibrous scaffold can be manipulated to fabricate a suitable TME through physical attachments. In its universal application, fiber-based scaffolds can be fabricated into composite/hybrid scaffolds, microfluidic-based fibrous scaffolds, nanofibrous structures, or electrospun fibrous scaffolds [67,68][31][32]. Fu et al., (2020) developed silk fibroin (SF) scaffolds derived from silkworms in a fibrous protein in a cocoon. In this study, SF-coated rice paper (RP) was fabricated, and it was prepared through a one-step dip-coating protocol (Figure 3B,C) [35][28]. To prove its biocompatibility, human breast, lung, and liver cancer cells were cultured on this platform, successfully demonstrating spheroid formation. To confirm its cell viability assessment, MTT assay and cell staining were performed, each demonstrating its potential for large-scale clinical application. Drug sensitivity was also investigated.

Gel-based scaffolds can be modeled directly into an unstructured molded tissue. However, their stability is weak; therefore, they can be used with tissues under load such as bones. Biomaterials for gel-type 3D cell culture are derived from natural and artificially modified materials [69][33]. Since gels allow independent control of matrix and ECM functionalization, Ashworth et al., (2020) demonstrated a self-assembling peptide gel for designing the 3D cell culture [70][34]. By controlling stiffness through peptide concentration and pH condition, the peptide gel was fully utilized with further experiments on culturing breast cancer. An analysis of the results obtained through immunofluorescence staining and quantitative reverse transcription polymerase chain reaction (qRT-PCR) indicated that the peptide gel can be used to model the progression of breast cancer, independent of the matrix microenvironment regulation. Some researchers reported a self-assembling peptide, bQ13, that can be useful for obtaining the 3D culture of prostate cancer cells [36][35]. These self-assembled peptides have been known to help stabilize 3D culture and provide a user-defined matrix that can be tailored with different experimental conditions [71][36]. Investigation of the rheological properties of the peptides proved its maintenance in an ungelled state at a basic pH. Additional examinations of cell encapsulation and survival through immunostaining showed a well-organized, non-polarized morphology within the prostate spheroids, indicating an attractive scaffold for further modification. Hence, hydrogel scaffolds allow minimal damage to the spheroids and facilitate transport of nutrients and water as compared to other porous and fibrous scaffolds.