Cadmium (Cd) is one of the most injurious heavy metals, affecting plant growth and development. Melatonin (N-acetyl-5-methoxytryptamine) was discovered in plants in 1995, and it is since known to act as a multifunctional molecule to alleviate abiotic and biotic stresses, especially Cd stress. Endogenously triggered or exogenously applied melatonin re-establishes the redox homeostasis by the improvement of the antioxidant defense system. It can also affect the Cd transportation and sequestration by regulating the transcripts of genes related to the major metal transport system, as well as the increase in glutathione (GSH) and phytochelatins (PCs).

Heavy metal pollution is the most widespread contamination resulting from anthropogenic activities in the world [1]. It has raised concerns about its various harmful risks to human health via the metal transfer along the food chain [2]. Among the heavy metals, cadmium (Cd) is a toxic element and poses a hazardous impact to living organisms, such as renal tubular dysfunction and bone disease [3]. In plants, Cd disturbs a range of important biochemical, morphological, physiological, and molecular processes, thus resulting in chlorosis and shunted growth [4][5][4,5]. Cd stress deceases the chlorophyll content, net photosynthetic rate, stomatal conductance, intracellular CO2 concentration, and transpiration rate [4][5][6][4,5,6]. Cd stress induces the excess accumulation of reactive oxygen species (ROS), mainly due to the imbalance between ROS generation and scavenging [7][8][7,8]. Increased concentrations of ROS further induce the lipid peroxidation and oxidative damage, destructing plant membranes, macromolecules, and organelles [7][8][7,8]. Additionally, excessive bioaccumulation of Cd in plants inhibits Fe and Zn uptake, and disrupts the uptake and transport of K, Ca, Mg, P, and Mn [9]. In response to Cd stress, plants have evolved the complex biochemical and molecular mechanisms that modulate ROS homeostasis and Cd compartmentation and chelation [7][10][11][12][7,10,11,12]. Plant hormones (ethylene, salicylic acid (SA), abscisic acid (ABA), jasmonic acid (JA), auxin, brassinosteroids (BRs), and strigolactones (SLs)) and signaling molecules (nitric oxide (NO), carbon monoxide (CO), hydrogen sulfide (H2S), and Ca2+) are involved in plant response to Cd stress [13][14][13,14]. Moreover, recent studies have reported that melatonin acts as a master regulator in plant Cd tolerance.
Melatonin (N-acetyl-5-methoxytryptamine) was discovered in plants in 1995, and it is since known to act as a pleiotropic molecule to participate in multiple physiological processes, such as plant growth and development, and protection against abiotic and biotic stresses [15][16][15,16]. In recent years, numerous studies have focused on the protective role of melatonin against Cd stress in plants [17]. Application of exogenous melatonin increased photosynthetic pigments, and improved relative water content and stomatal conductance in mallow plants upon Cd stress [18]. Many results showed that melatonin could re-establish redox homeostasis by certain enzymatic and non-enzymatic antioxidant defense systems to alleviate Cd-induced oxidative stress [19][20][19,20]. In addition, melatonin decreased Cd accumulation via regulating the transcripts of several heavy metal transporter genes to restrict Cd influx, and promote Cd efflux and chelation [19][21][19,21]. Moreover, NO and hydrogen peroxide (H2O2) signaling, microRNAs, heat shock factor HsfA1a and flavonoids may be involved in melatonin-mediated Cd tolerance in plants [19][22][23][24][25][19,22,23,24,25]. 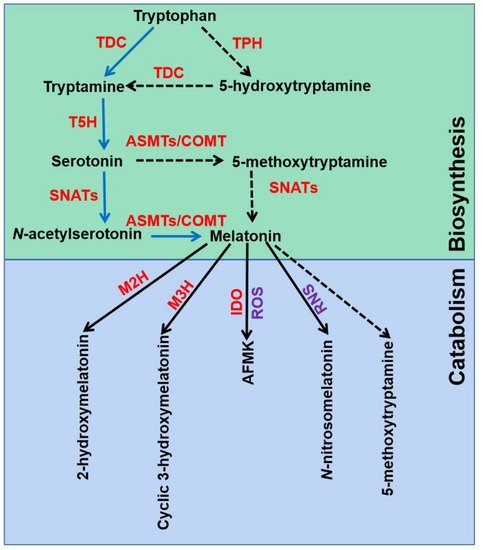 2.2. Melatonin Acts as a Master Regulator in Plant Abiotic Stress 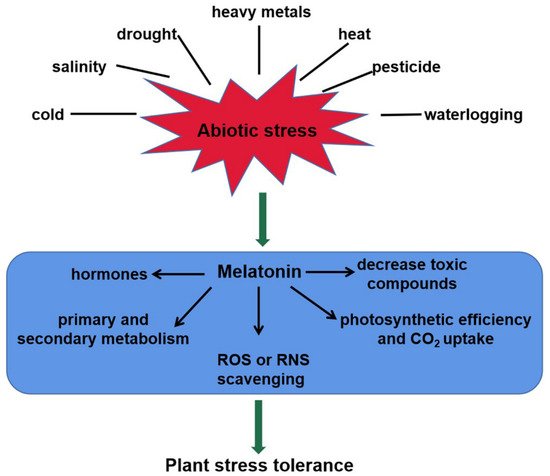 4. A Possible Role for H2S in Melatonin-Mediated Tolerance against Cd Stress

Acting as a signaling molecule, NO interacts with other molecules (H2O2, CO, and H2S) to mediate plant growth and development, as well as abiotic stress responses [59][100]. Among the molecules, H2S is also involved in almost all physiological plant processes [60][59][27,100]. To date, there is considerable research on the role of NO in melatonin-modulated plant abiotic stress tolerance. However, the functions of H2S have been largely unknown. It will become a research hotspot to contribute to precise analysis of the collaboration between H2S and melatonin, and provide deeper insight into melatonin-mitigated signaling mechanisms. 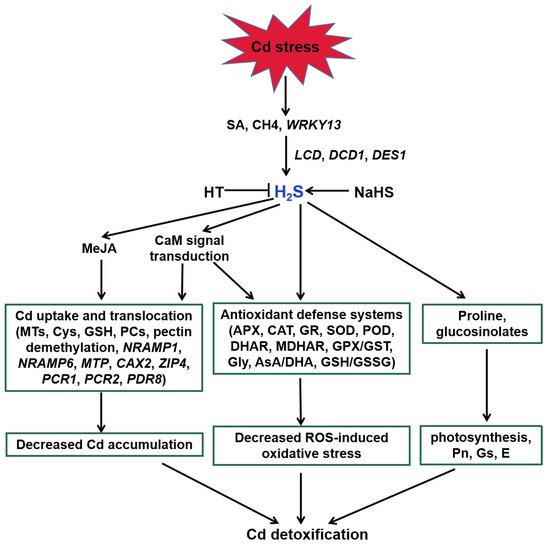 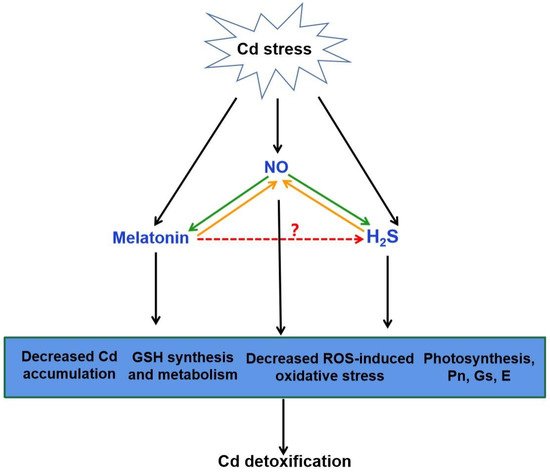 Figure 4. The possible role of H2S in melatonin-mediated Cd detoxification. NO generation can be induced by Cd stress. Increasing evidence showed that melatonin and H2S act as the downstream of NO in the responses to Cd stress, respectively (green arrow). It is also suggested that NO acts as a downstream of melatonin or H2S to improve Cd tolerance (orange arrow). The combination of melatonin, NO and H2S might be responsible for melatonin-triggered signal transduction in plant Cd tolerance via the decreased Cd accumulation, GSH synthesis and metabolism, decreased ROS-induced oxidative stress and improved photosynthesis. Red arrow, yet largely unknown. Cd, cadmium; NO, nitric oxide; H2S, hydrogen sulfide; GSH, glutathione; ROS, reactive oxygen species; Pn, photosynthesis rate; Gs, stomatal conductance; E, transpiration.
There exists a complicated and synergistic relationship between H2S and NO in response to Cd stress in plants (Figure 4; [69][72][79][80][115,118,124,125]). Exogenous NO and H2S application increased the Cd tolerance in plants [69][79][81][115,124,126]. Subsequent pharmacological experiments proved that H2S donor NaHS triggered NO production, which might act as a signal for alleviation of Cd-induced oxidative damage in alfalfa seedling roots [79][124]. Nevertheless, H2S production activated by NO is essential in Cd stress response of bermudagrass [69][115]. As a second messenger, Ca acted both upstream and downstream of NO signal, and crosstalk of Ca and NO regulated the cysteine and H2S to mitigate Cd toxicity in Vigna radiata [81][126]. Moreover, application of sodium nitroprusside (SNP), the donor of NO, increased H2S generation, and thus enhanced Cd stress tolerance in wheat [72][118]. However, this protective effect was reversed by hypotaurine (HT), the scavenger of H2S [72][118]. These results suggested that H2S and NO can function in a coordinated way under certain signaling cascades in plants under Cd stress.

4.2. Crosstalk of Melatonin and H2S in Plants

The interaction between melatonin and H2S plays a beneficial role in abiotic stress response [82][32]. Exogenous melatonin regulated the endogenous H2S homeostasis by modulating the L-DES activity in salt-stressed tomato cotyledons [83][31]. Moreover, an endogenous H2S-dependent pathway was involved in melatonin-mediated salt stress tolerance in tomato seedling roots [84][34]. Synergistic effects of melatonin and H2S regulated K+/Na+ homeostasis, and reduced excessive accumulation of ROS by enhancing the activity of antioxidant enzymes. Inhibition of H2S by HT reversed the melatonin-modulated heat tolerance by inhibiting photosynthesis, carbohydrate metabolism, and the activity of antioxidant enzymes in wheat [85][36]. Recent investigation has revealed that melatonin-induced pepper tolerance to iron deficiency and salt stress was dependent on H2S and NO [72][118]. It was further confirmed that H2S and NO jointly participated in melatonin-mitigated salt tolerance in cucumber [86][35]. Thus, these results postulate that H2S might act as a downstream signaling molecule of melatonin. Combined with the roles of H2S and melatonin in alleviating Cd stress, it is easy to speculate that H2S might be involved in melatonin-mediated Cd tolerance in plants (Figure 4).
As mentioned above in Section 3, GSH plays a critical role in plant Cd tolerance. It is synthesized from glutamate, cysteine and glycine by γ-glutamyl cysteine synthetase (γ-ECS, encoded by GSH1/ECS gene) and glutathione synthetase (GS, encoded by GSH2/GS gene) [87][127]. The catalysis of GSH1 is the rate-limiting step of GSH biosynthesis [88][128]. Cd stress induced the transcripts of GSH1 and GSH2 in Arabidopsis, as well as ECS and GS in Medicago sativa [68][89][90][91][114,129,130,131]. It was suggested that H2S could be quickly incorporated into cysteine and subsequently into GSH [92][132]. Application of NaHS re-established (h)GSH homeostasis by further strengthening the up-regulation of ECS and GS genes [68][114]. Similar results were also found in strawberry and cucumber plants [93][94][133,134]. Interestingly, exogenous melatonin also increased the GSH content by inducing the transcript levels of SlGSH1 in tomato [95][75]. Hence, there might be a certain connection between H2S and melatonin in regulating the GSH homeostasis at the transcriptional regulatory pathway. This will provide an interesting direction for further research on the complex interactions between melatonin and H2S in improving Cd tolerance in plants.
© Text is available under the terms and conditions of the Creative Commons Attribution (CC BY) license (http://creativecommons.org/licenses/by/4.0/)
Help
Top