Although many preventive and treatment approaches have been proposed, cardiovascular disease (CVD) remains one of the leading causes of deaths worldwide. Current epidemiological data require the specification of new causative factors, as well as the development of improved diagnostic tools to provide better cardiovascular management. Excessive accumulation of adipose tissue among patients suffering from obesity not only constitutes one of the main risk factors of CVD development but also alters adipokines. Increased attention is devoted to bioactive adipokines, which are also produced by the adipose tissue. The retinol-binding protein 4 (RBP4) has been associated with numerous CVDs and is presumably associated with an increased cardiovascular risk. With this in mind, exploring the role of RBP4, particularly among patients with obesity, could be a promising direction and could lead to better CVD prevention and management in this patient group.

Cardiovascular disease (CVD) constitutes the most common cause of death in European countries, accounting for 2.2 million deaths in females (47% of all-cause of deaths) and 1.9 million deaths in males (39% of all-cause of deaths) [1][2][3][4]. Additionally, it is responsible for 37% and 34% of all years lost (measured by potential years of life lost, PYLL) among females and males, respectively [1]. Not only is CVD a health issue, but it also involves a significant socio-economic impact [1]. It is estimated that by 2030 the total cost of CVD will rise to USD 1044 billion [5]. Currently, more than half (55%) of the costs is derived from direct healthcare (report on Accident and Emergency departments, medications; inpatient-, outpatient-and primary care) and 45% of the costs originate from the informal care and productivity loss due to morbidity and mortality [4]. The major risk factors of CVD development have been identified in the Framingham Heart Study and INTERHEART case-control study [6][7]. Eight risk factors and health behaviors (hypertension, dyslipidemia, diabetes, obesity, smoking, alcohol, diet, sedentary lifestyle) are the World Health Organization’s (WHO) targets for reduction by 2025 [8]. Obesity is a serious health problem and, if the current trends continue, in the next ten years, almost 40% and 20% of the global adult population will be suffering from overweight and obesity, respectively [9]. Currently, it is estimated that over 3 million patients worldwide die due to excessive body weight [10]. Moreover, obesity may influence cardiovascular risk by means of the presence of obesity-related comorbidities, hemodynamic repercussions, body fat mass content and distribution [11][12][13]. All-cause mortality increased log-linearly throughout the overweight range, with the hazard ratio (HR) of 1.39 per 5 kg/m2 [14]. Excessive accumulation of adipose tissue, particularly visceral fat (VF), contributes to a higher prevalence of hypertension, dyslipidemia, and glucose intolerance, which lead to CVD development [15][16][17]. Adipose tissue also regulates many systemic and pathological processes due to the secretion of bioactive proteins—adipokines [18]. Most of them—e.g., tumor necrosis factor-α (TNF-α); IL-6: interleukin (IL-6)—have pro-inflammatory properties and have been associated with vascular and atherothrombotic complications in atherosclerosis, since they influence the function of endothelial cells, arterial smooth muscle cells, and macrophages in the vessel walls [19][20][21][22][23]. However, few of them may have a protective effect in CVD (e.g., adiponectin). In fact, among patients with obesity, the secretion of adipokines is frequently abnormal [24]. We have characterized one of the novel adipokines—retinol-binding protein 4 (RBP4), with a particular emphasis on its role in obesity and CVD development. However, there is an ongoing controversy with regard to any RBP4 role in both inflammation and CVD prediction. Thus, more reviews and research studies are still necessary.

2. Role and Structure of RBP4

Retinol-binding protein 4 (RBP4), presented in Figure 1, belongs to the lipocalin family and has a tertiary structure known as the ‘lipocalin fold’ which facilitates the binding of small hydrophobic molecules, such as lipids [19]. RBP4 is synthesized and secreted in the liver (mostly) and other tissues, such as adipose tissue [24]. It transports vitamin A (retinol) from the liver to target tissues and constitutes a major regulator of circulating levels of retinol [25]. RBP4 is transferred within the bloodstream in combination with transthyretin (TTR), which prevents kidney filtration and catabolism of RBP4 [26]. The receptor proteins for RBP4 are STRA6 (stimulated by retinoic acid gene 6) and RBPR-2 (RBP4-receptor 2) [26]. In fact, urinary excretion of RBP4 may be a useful marker for the detection of renal dysfunction [27][28]. In patients with chronic kidney disease (CKD), higher serum RBP4 levels were associated with a higher rate of cardiovascular events and higher mortality, which suggests that RBP4 levels may indicate an increased risk of cardiovascular risk within this group [29]. In the Bobbert et al. study, serum RBP4 levels were also higher in diabetic patients compared to nondiabetic individuals, although not in terms of the levels of retinol and transthyretin [30]. Nevertheless, it should be emphasized that RBP4, retinol, and retinoic acid can differentially affect CVD and metabolic diseases [31]. Therefore, vitamin A metabolism should be taken into consideration when investigating the role of RBP4 since it can act by itself or affect retinol metabolism and retinoic acid signaling [32]. Additionally, vitamin A deficiency reduces serum RBP4 levels, and, hence, it is essential to evaluate not only the metabolism of vitamin A but also its dietary intake when assessing RBP4 concentrations [33]. A decrease in adipose tissue GLUT4 expression, which is the major glucose transporter protein mediating glucose uptake, leads to increased serum RBP4 levels associated with the induction of insulin resistance in the liver and muscle [34]. It has been shown that moderate weight reduction lowers serum RBP4 levels in nondiabetic subjects [27]. However, new evidence suggests that RBP4 plays a more significant role in the lipid metabolism than in insulin resistance [35]. One of the questions regarding RBP4 is which of its serum concentrations are normal, and which are pathological. In healthy individuals, normal serum RBP4 ranges from 10 to 50 µg/mL (without vitamin A deficiency), but among individuals with Type 2 diabetes (T2DM), CVD or obesity, it may reach up to 150 µg/mL [26][30][33][34][36][37][38][39]. In the study led by Farjo et al., the most substantial influence on pro-inflammatory molecules was achieved with RBP4 serum concentrations of 100 µg/mL [40]. However, lower concentrations in the range of 10 to 25 µg/mL were also shown to be enough to influence pro-inflammatory molecules, which suggest that endothelial cells may be responsive to even small elevations in serum RBP4 concentrations [33][40][41]. RBP4 is also known as a negative acute-phase reactant, and hospitalization may decrease its serum levels [33]. Therefore, the choice of the assay employed in the measurement of serum RBP4 levels should also be careful. As Graham et al. presented in their study, quantitative Western blotting is the most reliable method for assaying serum RBP4 elevations associated with insulin resistance [39]. However, other measurement methods—e.g., ELISA (enzyme-linked immunosorbent assay), EIA (enzyme immunoassay)—are also widely used in various populations [42]. Additionally, RBP4 concentrations were found to be different among men and women. Some research studies indicated that RBP4 was significantly higher in men than in women, including adolescent boys and girls, whereas no such association was observed in other studies [35][43][44]. This could be explained by different amounts and distribution of the adipose tissue (including liver fat), the influence of the sex hormones, and iron metabolism [44][45][46]. RBP4 levels were also markedly different between premenopausal and postmenopausal healthy women, with higher levels among the second group [47]. The summary of measurement methods and serum RBP4 range in the selected studies, according to CVD risk assessment, are listed in Table 1. 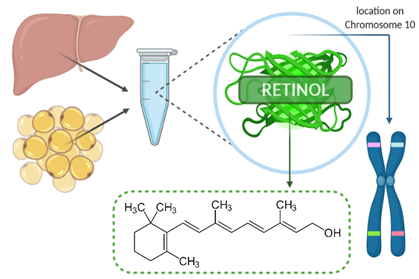 3. RBP4 Gene—Structure and Polymorphism vs. CVD in Obesity

Since RBP4 may be correlated with conditions related to T2DM, obesity, or CVD, the RBP4 gene may constitute the gene carrying obesity-related implications [54]. Additionally, the RBP4 gene location is close to a region linked with an increased risk of T2DM and elevated fasting blood glucose levels [55][56][57]. Thus, it has been proposed that functional RBP4 gene polymorphisms influence a higher obesity incidence, insulin resistance, hyperinsulinemia, T2DM, and artery thickness [26]. These hypotheses were confirmed by research carried out in recent years by several research teams. The most significant RBP4 gene variants connected with CVD and its markers are summarized in Table 2 and presented in Figure 2, with the distribution of each locus and the minor allele frequency (MAF) occurrence in the world population based on 1000 Genomes Project data (phase 3; https://www.internationalgenome.org/). It is worth noting that all of the listed variants are located outside the coding gene region and that there can be a potential relationship between the regulation and the change in gene expression levels.

As mentioned before, the secretion of adipokines is frequently abnormal among patients with obesity. Adipocyte hypertrophy, ectopic fat accumulation, and adipose tissue inflammation may cause adverse adipokine secretion, which, in turn, can be associated with a number of health consequences, including metabolic, inflammatory, or cardiovascular diseases [63]. However, in several studies, RBP4 levels were higher among individuals with obesity in comparison to control groups. In other studies, no such correlation has been found. In the Korek et al. study, RBP4 levels did not correlate with BMI or fat mass and did not differ between individuals with obesity and those without obesity—RBP4 levels in both groups were 33.93 ± 4.46 and 32.53 ± 2.53 µg/mL, respectively [64]. Similar results were reported by other authors [65][66][67][68]. On the other hand, certain studies demonstrate increased RBP4 concentrations among individuals with obesity, as well as the association between RBP4 and BMI [36][69]. Therefore, it has been suggested that RPB4 concentrations may not be related necessarily to obesity itself, but to the location of the adipose tissue. The expression seems to be higher in visceral (VF) than in the subcutaneous tissue (SF); thus, RBP4 levels are more closely associated with VF levels and appear to constitute the best indicator of intra-abdominal adipose mass [35][70][71]. RBP4 may be the mechanistic link between the visceral adiposity and increased cardiovascular risk associated with this type of adipose tissue [49][71]. In the study by Lee et al., RBP4 levels were correlated with visceral fat areas, but not with the total body fat (wt.%), and, as the authors suggested, RBP4 could be the link between visceral obesity and atherosclerotic vascular changes [72]. Furthermore, RBP4 levels may also be prone to weight loss. In fact, serum RBP4 levels decreased considerably by 25.5% after weight reduction—almost 11% of weight loss in the course of a 16-week program [27]. However, it is essential to point out that in addition to a reduced caloric intake by 600 kcal/day, sibutramine was also used. Interestingly, the statistically significant increase in RBP4 levels was also observed in patients undergoing bariatric surgery—RBP4 levels (ng/mL) were 22,456.5 ± 13,158.8 and 31,342.2 ± 8172.5 in pre-and post-bariatric periods, respectively [68]. In two different studies, RBP4 levels decreased significantly following bariatric surgery [69][70]. According to Zachariah et al., participants with serum (log-transformed) RBP4 levels at the 4th quartile presented a 75% higher risk of developing the metabolic syndrome when compared to patients in the 1st quartile [73]. Moreover, in the study by Karamfilova et al., RBP4 levels ≥55 mcg/mL were associated with a 3.1 higher risk of developing metabolic syndrome [74]. Other studies also have confirmed the relationship between the components of metabolic syndrome and RBP4 levels [65][66]. Additionally, RBP4 can also be a predictor for the diagnosis of metabolic syndrome and weight regain [70][74][75]. In fact, Vink et al. demonstrated that RBP4 was a predictor of weight regain—stronger in men and individuals following a low-calorie diet than in women and individuals following a very-low-calorie diet [75].

Possible explanations regarding different concentrations or changes in RBP4 may include both ethnic and age differences (e.g., presence of renal dysfunction) [66]. Despite different data, there is still a strong association between RBP4 and obesity.