Lipid rafts are dynamic assemblies of glycosphingolipids, sphingomyelin, cholesterol, and specific proteins which are stabilized into platforms involved in the regulation of vital cellular processes. The rafts at the cell surface play important functions in signal transduction. Recent reports have demonstrated that lipid rafts are spatially and compositionally heterogeneous in the single-cell membrane. In this review, we summarize our recent data on living platelets using two specific probes of raft components: lysenin as a probe of sphingomyelin-rich rafts and BCθ as a probe of cholesterol-rich rafts.

The fluid mosaic model has supported our understanding of cellular membranes for a long time. Recent studies suggest that plasma membrane lipids are not homogeneously distributed and that the membranes may contain microdomains or compartments. Glycosphingolipids form microdomains containing cholesterol in the cell membrane. Glycosphingolipid- and cholesterol-rich microdomains are referred to as lipid rafts. Lipid rafts are dynamic assemblies of glycosphingolipids, sphingomyelin, cholesterol, and proteins which are stabilized into platforms involved in the regulation of a number of cellular processes [1]. Lipid rafts are isolated as a detergent-resistant membrane (DRM) fraction by sucrose density gradient centrifugation. Recent studies have demonstrated that lipid rafts are spatially and compositionally heterogeneous in the cell membrane. In migrating T cells, GM3 ganglioside-rich rafts containing a chemokine receptor are present at their leading edge, whereas GM1-rich rafts containing integrin β1 are present at their uropod [2].

In 1996, platelet DRM was shown to be rich in glycoprotein CD36, Src, and Lyn [3]. Platelet rafts are important membrane microdomains in responses such as adhesion and aggregation. The localization of the adhesion receptor glycoprotein (GP)Ib-IX-V complex to lipid rafts is required for platelet adhesion to the vessel wall by binding the von Willebrand factor (vWF) [4][5][4,5]. In resting platelets, phosphatidylserine (PS) is asymmetrically restricted to the inner leaflet of the plasma membrane. An increase in intracellular Ca2+ concentration during platelet activation can lead to the exposure of PS in the outer leaflet. PS forms a procoagulant binding site for tenase and prothrombinase coagulation complexes. Lipid rafts are required for the release of PS-exposing extracellular vesicles from platelets [6]. Thus, lipid rafts are critical membrane domains in platelet activation processes [7][8][7,8]. Interestingly, platelet DRM shifts to a higher density in sucrose gradients upon thrombin receptor activating peptide (TRAP) stimulation [9]. Trace amounts of actin are observed in rafts from resting platelets, but a marked increase in the amount of actin is found in rafts upon platelet stimulation by TRAP. Platelet DRM also shifts to a higher density in sucrose gradients upon adenosine diphosphate (ADP) stimulation [10].

We have been identifying glycosphingolipid-binding proteins [13][14][15][16][17][18][19][13–19] and investigated the signal transduction in lipid rafts of platelets [20]. Previously, we reported that clot retraction is mediated by the coagulation factor XIII (FXIII)-dependent ﬁbrin-integrin αIIbβ3-myosin axis in platelet sphingomyelin (SM)-rich membrane rafts [21]. Clot retraction is a process driven by outside-in signaling by the platelet integrin αIIbβ3, resulting in the contraction of the fibrin mesh and the formation of mechanically stable thrombi. To elucidate the function of platelet lipid rafts, we identified DRM-raft-speciﬁc proteins from activated platelets. We isolated the DRM raft fraction of platelets treated with thrombin by sucrose gradient centrifugation. Several speciﬁc proteins were present in the DRM fraction of thrombin-stimulated platelets. By mass spectrometry, we identified three proteins of 65, 50, and 47 kDa as ﬁbrins α, β, and γ, respectively. These findings were supported by the results of immunoblot analysis using an anti-ﬁbrinogen/fibrin polyclonal antibody. In resting platelets, ﬁbrinogens Aα (67 kDa), Bβ (52 kDa), and γ (47 kDa) were present in the non-raft fraction. In contrast, ﬁbrins α (65 kDa), β (50 kDa), and γ (47 kDa) were exclusively present in the DRM fraction of platelets treated with thrombin (Figure 1A) [21]. Therefore, we investigated the subcellular distribution of fibrin and BCθ-positive cholesterol-rich rafts on thrombin-stimulated spreading platelets by scanning immunoelectron microscopy. Fibrin was localized in the central area of spreading platelet (Figure 1B, left panel). In contrast, BCθ-positive cholesterol-rich rafts were localized evenly on the membrane (Figure 1B, right panel). These observations suggest that fibrin is translocated to platelet rafts other than cholesterol-rich rafts following thrombin stimulation. 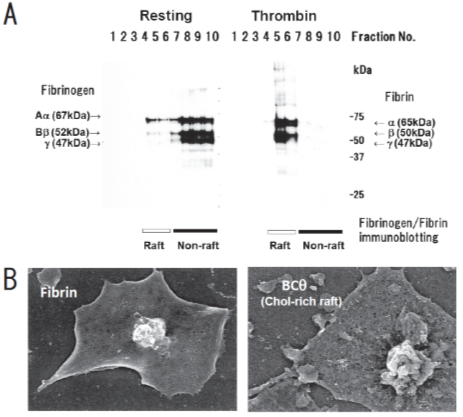 Figure 1. Fibrin translocation to lipid rafts in central region of spreading platelets stimulated with thrombin. (A) Sucrose density gradient analysis of washed human platelets. Resting platelets (left) and platelets stimulated for 3 min with 1 U/mL thrombin (right) were lysed in Triton X-100 and then adjusted to 40% sucrose. A sucrose gradient (5–30%) in a volume of 6 mL was layered over the lysate (4 mL) and was centrifuged. Ten fractions were collected from top to bottom after centrifugation and subjected to immunoblotting with an anti-fibrinogen polyclonal antibody. In resting platelets, ﬁbrinogens Aα (67 kDa), Bβ (52 kDa), and γ (47 kDa) were detected in the non-raft fraction (lanes 7–10). In contrast, ﬁbrins α (65 kDa), β (50 kDa), and γ (47 kDa) were detected in the raft fraction (lanes 5,6) of thrombin-stimulated platelets. (B) Localization of fibrin (left panel) and BCθ-positive cholesterol-rich rafts (right panel) of thrombin-stimulated spreading platelets on fibronectin by scanning immunoelectron microscopy. Spreading platelets were incubated with 15 μg/mL BCθ for 30 min followed by glutaraldehyde fixation and immunolabeling with anti-biotin IgG gold. Gold-positive fibrins were localized in the central region of spreading platelet (left). In contrast, gold-positive cholesterol-rich rafts were localized uniformly on the membrane (right). The study was approved by the institutional ethics committee. 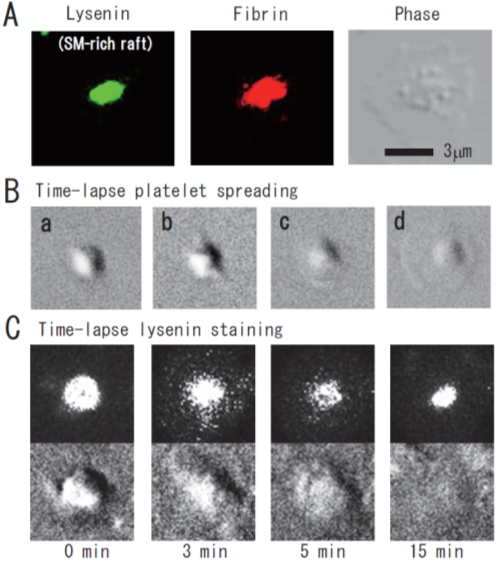 The adaptor protein Disabled-2 (Dab2) as a key regulator of platelet signaling is a sulfatide-binding protein. Its interaction is mediated by two N-terminal conserved basic motifs (amino acid residues 24–29 and 49–54) with a dissociation constant Kd of 0.6 μM [47]. Dab2 is present in the cytoplasm and α-granules of platelets and is released from the platelets in response to platelet activation. Dab2 interacts with the cytoplasmic tail of the integrin αIIbβ3 and regulates inside-out signaling [48]. On the other hand, Dab2 released from α-granules inhibit platelet aggregation by competing with fibrinogen for binding to the integrin αIIbβ3, an interaction that is modulated by Dab2 binding to sulfatide at the outer leaflet of the plasma membrane. The Dab2 sulfatide-binding motif peptide can prevent sulfatide-induced platelet aggregation [49][50][49,50]. The bleeding time is prolonged and thrombus formation is impaired in Dab2-deficient mice. Dab2-deficient platelets elicited a selective defect in platelet aggregation and spreading on fibrinogen by thrombin stimulation [51].

Ganglioside GD3 is rapidly expressed on the platelet surface following platelet activation and internalized to the cytoskeleton where it transiently associates first with the Src family kinase Lyn then with the Fc receptor gamma chain [32]. The binding of bacterial cells to human platelets contributes to the pathogenesis of infective endocarditis. Platelet binding by Streptococcus mitis strain SF100 is mediated by two surface proteins, PblA and PblB. α2-8-linked sialic acid residues on platelet membrane ganglioside GD3 are the primary targets for PblA/PblB-mediated binding to human platelets. [54].

Globotriaosylceramide Gb3 is a functional receptor of the Shiga toxin [40]. Shiga toxin is the principal virulence factor of enterohemorrhagic Escherichia coli. Thrombocytopenia caused by platelet consumption in thrombi is a primary symptom of hemolytic uremic syndrome associated with Shiga toxin. Shiga toxin1 and its B (binding) subunit bind to platelets, leading to fibrinogen binding and platelet aggregation[55] [55]. The possible existence of glycosphingolipid-specific rafts, such as sulfatide-rich rafts, remains to be explored.