Sunlight is overwhelmingly the largest source of energy input on the Earth [47][15]. As such, it is the driving force for most of the chemical transformations that occur in the atmospheric gas and aqueous phases [34][16]. The majority of organic aerosol can be found in the troposphere where sunlight of wavelengths greater than 290 nm penetrates [48][17]. The troposphere is the lowest layer of the atmosphere that extends from the Earth’s surface to about 10–16 km depending on the current temperature, underlying surface configuration, latitude, and time of day [49][18]. The primary reason for the 290 nm cut off in the troposphere is that ozone (O3) in the layer directly above the troposphere, called the stratosphere, filters out much of the light between 220 and 330 nm [49][18]. The total solar irradiance that reaches the Earth’s atmosphere is on the order of 1360 W m−2 [47][15], a huge amount of energy that allows many varied light-dependent reactions to occur.
In atmospheric chemistry, organic molecules typically undergo two types of photochemical reactions: direct and indirect photolysis. Direct photolysis may occur if the species in question can absorb photons of the wavelengths available in sunlight. Typically, the importance of direct photolysis is evaluated by comparing quantum yields (Φ), which is defined as a number of events per photon absorbed [50][19]. For this work, Φ would be the number of molecules of reactant destroyed or of product generated per photon absorbed. Φ for many processes in the gas phase and in organic solvents have been reported in the literature, but aqueous photochemical processes have received little attention until recently, leading to a lack of Φ values for atmospheric models to evaluate the relative importance of each photochemical process [35][20]. If the molecule cannot absorb sunlight, indirect photooxidation can occur through reaction with photochemically produced hydroxyl radicals (HO•), which is the most important atmospheric oxidant in both the gas phase and the aqueous phase. For most organics, reaction with HO• controls their primary fate due to absorption bands that are below 290 nm, or to the small molar absorption coefficients that make the typically fast HO• reaction outcompete direct photolysis [35][20].
In this regard, small 2-oxocarboxylic acids are a special case. Because of the conjugation of the two adjacent carbonyls, the n→π* transition of 2-oxocarboxylic acids’ absorption profiles are shifted to low enough energy that they can absorb sunlight directly, leading to complex radical chemistry. Figure 1 shows the UV-visible absorption spectra of aqueous GA (dashed green trace) and PA (solid blue trace) overlapped with the direct solar irradiance spectrum (red trace) recorded at noon on a sunny cloudless day at 230 m above ground level on 19 August 2018 in Lexington, KY, USA (elevation of 298 m above the see level). The vertical dashed line in Figure 1 indicates the minimum wavelength of solar radiation that can penetrate to ground level, 290 nm. The overlap between the spectra of GA and PA with the solar spectrum indicates that both 2-oxocarboxylic acids should be readily photoactivated to possibly form higher complexity, more oxidized products, contributing to SOA production in the atmosphere. Furthermore, two studies based on a combination of rate constants and absorption profiles have predicted that direct aqueous photochemistry should be a significant fate for PA, and may even be the dominant fate for PA rather than gas phase photolysis or gas/aqueous reaction with HO• [1,35][1][20]. The removal by HO• of GA and PA is relatively fast in the aqueous phase [51,52][21][22] with average lifetimes of five days for both. Instead, the photochemical lifetime of GA and PA in atmospheric water are 11 days and 22 min, respectively [2,3][2][3]. Thus, GA can also be expected to undergo direct photolysis, albeit the slower rate. However, with the higher atmospheric production of GA than PA, its direct photolysis, while not the primary sink, has a significant impact on atmospheric composition, making both GA and PA contributors to SOA production. 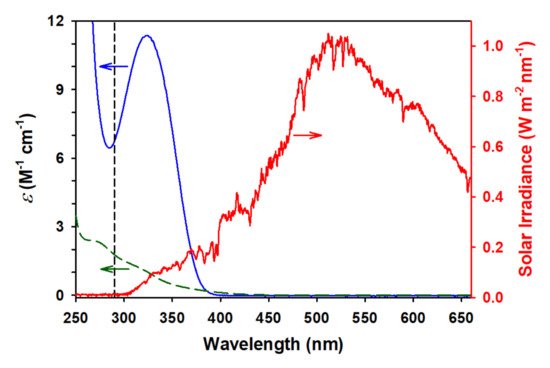 We provided a brief description of some representative photochemical studies with small 2-oxocarboxylic acids above, where water played a key role in the observed chemistry. Indeed, aqueous tropospheric chemistry can be influenced by photochemical reactions, which provide reactive species, an emerging issue that deserves more attention. Despite the substantial progress that has been made in this field, the current comprehension of water solvation effects in the photochemistry is still in progress. Future laboratory experiments, computational quantum mechanical modeling, and molecular dynamic simulations could advance our understanding of effects such as solvation, stabilization, and solute position and orientation [88,100][23][24] in the photoprocesses in bulk and interface chemistry. Because the photochemical products of these reactions can contribute to the reservoir of light absorbing species in atmospheric waters, they can also play an active role in the aging of aqueous SOA, i.e., by triggering photosensitized reactions. Thus, quantitative understanding of the radicals and reactive oxygen species (ROS) produced from the photochemistry of 2-oxocarboxylic acids and of their implications in multiphase ageing of particulates is vital, as should also be the comparison with other competitive loss pathways. Studying how the generated excited triplet states directly and indirectly alter the organic surface-active components typically coating the air–water interface of atmospheric particles is of major importance. Addressing such problems should inform us of new processes that can modify the morphology and properties of atmospheric particles and their influence on climate forcing processes [101][25].