Nucleotide-binding oligomerization domain 2 (NOD2) is a cytoplasmic receptor that recognizes invading molecules and danger signals inside the cells.

The innate immune system provides the first line of defense against danger and relies primarily on pathogen recognition receptors (PRRs) to do so [1]. PRRs are the immune system players that recognize the molecules frequently found in pathogens or released by damaged cells (respectively known as pathogen-/damage-associated molecular patterns (PAMPs or DAMPs)) [2].
PRRs are categorized into four distinct functional groups: (1) Toll-like receptors (TLRs), (2) retinoic acid-inducible gene (RIG)-I-like receptors (RLRs), (3) C-type lectin receptors (CLRs), and (4) nucleotide-binding oligomerization domain-like receptors (NLR) [3].
NLRs are intracellular immune receptors conserved in both animals and plants. While some NLR proteins are involved in early embryogenesis and regulate the expression of major histocompatibility complex (MHC) molecules, certain NLR proteins play critical roles in recognizing damage-associated molecular patterns and in triggering immune responses [4].
The major PPRs, including TLRs, detect and capture pathogens on the cell surface or within endosomes, while NLRs are cytoplasmic receptors and detect their ligands in the cytosol, thereby providing another level of cell protection [5].
Nucleotide Binding Oligomerization Domain Containing 2 (NOD2) is a well-known member of the NLR family, which is expressed primarily in immune and epithelial cells [6][7][6,7]. This receptor detects a fragment of bacterial cell wall known as peptidoglycan muramyl dipeptide (MDP) and subsequently activates the signaling pathways, leading to proinflammatory cytokine production [8]. It has been shown that the polymorphisms in the NOD2 gene contribute to failure in microbial detection and are associated with increased susceptibility to some infectious diseases and granulomatous inflammation [9].

NOD-like receptors (NLRs) are evolutionally conserved proteins, belonging to the PRR family [5]. NLRs are also considered a large family of cytoplasmic receptors consisting of 22 members in humans and 34 members in mice [10]. They have an important role in the triggering and development of innate immune responses thorough sensing intracellular danger signals [11].
NLR proteins share a conserved triple domain structure containing a C-terminal leucine-rich repeat (LRR) domain, a central nucleotide-binding and oligomerization domain (NOD/NBD) (also known as NACHT domain), and a N-terminal protein–protein interaction domain (Figure 1) [7]. The C-terminal LRR domain is responsible for the detection of PAMPs and DAMPs and negatively regulates protein activity. The central NOD domain has ATPase and nucleotide binding activity, which is critical in protein oligomerization and function. The NOD domain contains a proximal helical domain 1 (HD1), a distal helical domain 2 (HD1), and a winged helical domain (WHD) [7] (Figure 1). The N-terminal effector domain is responsible for interacting with the downstream signaling molecules.
Based on the type of effector domains, the NLR family is divided into several subfamilies including NLRA containing an acidic transactivation domain (AD), NLRB (also known as NAIP) with a Baculovirus IAP Repeat (BIR) domain, NLRC with a caspase activation and recruitment domain (CARD), and NLRP with PYRIN domains (PYD) [12].
The NLRA and B subfamilies are involved in antiapoptotic functions and the transcription activation of MHCII via their intrinsic acetyl transferase (AT) activity. NLRC is one of the largest subfamilies of NLRs, consisting of six members (NOD1-5 and class II trans activators) that are characterized by their CARD effector domains [13].
The effector CARD domains have an important role in NLR’s downstream functions and interact with other CARD-containing proteins through homophilic interactions. NOD2 contains two tandem CARD effector domains and can interact with a wide variety of proteins containing the CARD domain (Figure 1) [12]. Here, we provide a brief review of NOD2 mechanisms and functions. 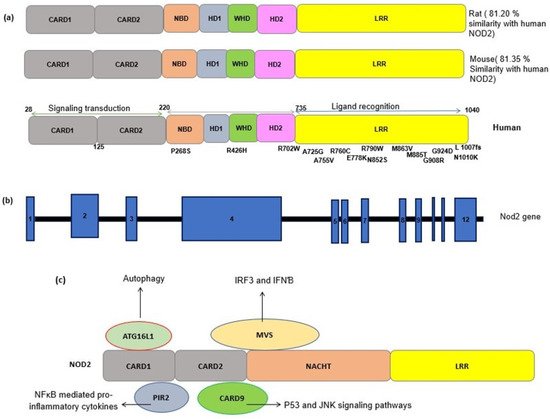 Figure 1. (a) Schematic representation of the NOD2 protein structure in a human, a mouse and a rat. The sequence identity of NOD2 gene in the rat and mouse with the human NOD2 gene is estimated by pairwise BLAST [14]. Common SNPs have been shown alongside the protein domains. CARD, caspase recruitment domain; NACHT, nucleoside triphosphates’ (NTPase) domain; LRR, leucine-rich repeats. (b) A schematic representation of the NOD2 gene. NOD2 is composed of 12 exons (blue rectangles). The numbers inside the blue rectangles indicate the exon numbers. (c) A schematic of the interactions between NOD2 and other cellular proteins. The interaction of activated NOD2 with PIR2 activates the NF-kB pathway. The NOD2 interaction with Autophagy-related 16-like 1 (ATG16L1) induces autophagy machinery assembling. NOD2 interacts with the adapter protein mitochondrial antiviral signaling protein (MAVS) upon sensing ssRNA, active interferon-regulatory factor 3 (IRF3) and consequently production of interferon β (IFNβ).

NOD2 acts through the mitogen-activated protein kinase (MAPK), inflammasome-associated, and NF-κB pathways which are considered the three main cell signal transduction pathways [15]. In the epithelial cells, NOD2 molecules are committed to the synthesis of anti-pathogenic peptides [16]. The expression level of specific antimicrobial α-defensins was significantly decreased in the Paneth cells of NOD2 knockdown mice [17]. Additionally, NOD2 can recruit Autophagy-related 16-like 1 (ATG16L1) and subsequently induce autophagy after activation (Figure 1) [18].
NOD2 is primarily activated upon sensing a component of bacterial peptidoglycan named N-acetyl muramyl dipeptide (MDP). It has been shown that NOD2 interacts with a wide variety of proteins. Mycobacterial N-glycolyl muramyl dipeptide and viral ssRNA are also the ligands of NOD2, which can active their associated signaling pathways [2].
Until the ligand activation, NOD2 is maintained in an inactive, autoinhibited conformation in the cell through interactions of the NOD domain with LRR domains and cellular chaperones, such as heat shock protein 90 (HSP90).
Upon activation, the C-terminal LRR domain of NOD2 undergoes a conformational change and exposes the CARD domain, which allows it to interact and oligomerize with the CARD domain in the adaptor molecule RIP2 (receptor-interacting protein 2) through a homophilic interaction. Upon oligomerization, activated PIR2 applies lysine 63 (K63)-linked polyubiquitination at lysine 209 of the kinase domain. This ubiquitination promotes recruitment of TAK1 and NEMO (the NF-kB essential modulators). The activation of TAK1 and NEMO promotes phosphorylation of the IKKβ kinase, which is a key kinase in the NF-κB signaling pathway. Phosphorylated IKKβ degrades IκB and subsequently actives NF-κB family transcription factors and the production of inflammatory chemokines [19] (Figure 2). 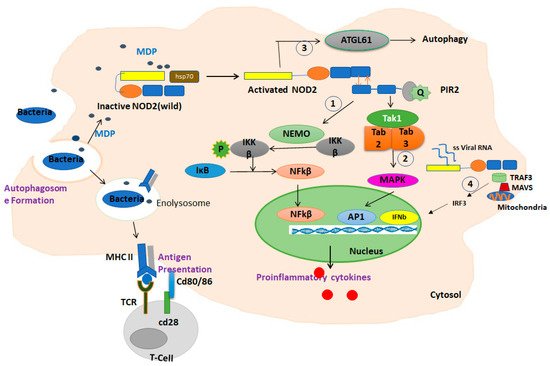 Figure 2. Summary of the function of NOD2 in response to MDP in macrophages. In the absence of a ligand, NOD2 is in an inactive autoinhibited form by folding the LRR domain onto NBD and CARD domains stabilized by chaperone proteins such as HSP70. Upon ligand binding and receptor activation, the C-terminal LRR domain of NOD2 undergoes a conformational change and exposes the CARD domain to interaction and oligomerization with the CARD domain in the adaptor molecule RIP2 through a homophilic CARD–CARD interaction. Upon oligomerization, PIR2 activates and promotes the ubiquitination of lysine 209 located at the kinase domain. (1) This ubiquitination promotes the recruitment of TAK1 and NEMO (the NF-kB essential modulators). The activation of TAK1 and NEMO promotes the phosphorylation of IKKβ, which is a key kinase in the NF-κB signaling pathway. Phosphorylated IKKβ degrades IκB and subsequently activates NF-κB family transcription factors. (2) In addition, this path also activates the MAPKs and AP1 pathways. The NF-κB and MAPK pathways are responsible for triggering the expression of inflammatory cytokines. (3) Activated NOD2 also may trigger an autophagic pathway by recruiting ATG16L1. (4) The interaction of NOD2/TRAF3 with mitochondrial antiviral signaling protein (MAVS) upon sensing viral ssRNA induces the activation of IRF3, triggering the expression of IFN-β gene.
Conversely, the activation of NOD2 by viral ssRNA leads to the production of interferon β (IFNβ) through an alternative pathway by recruiting an adapter protein, a mitochondrial antiviral signaling protein (MAVS), and an activating interferon-regulatory factor 3 (IRF3) [20] (Figure 1).
NOD2 also may trigger an autophagic pathway upon the detection of bacterial MDP by recruiting ATG16L1 to the bacterial entry site, which results in the engulfment of invading bacteria by autophagosomes formation [21]. The NOD2 signaling pathways are summarized in Figure 2.

The human gene encoding for the NOD2 receptor is CARD15, located on chromosome 16q12.1. The NOD2 protein has 104 amino acids with a molecular weight of 110 kDa, which is a multifunctional receptor. As NOD2 has many important roles, mutations in its gene may have serious consequences in vital cellular functions and immunity. NOD2 is a repository of genetic variants, most of which are associated with pathological conditions. Many previous studies have reported the association of NOD2 polymorphisms with inflammatory diseases (Table 1) [22][23]. As LRR is the ligand binding domain of the NOD2 receptor, mutations in this region may affect either responses to MDP or the downstream pathways [23][69]. The nonsense mutations in this region also may abolish the conformational changes needed for MDP binding and receptor activation and thus may lead to receptor loss-of-function.
Table 1. Some of the previous studies regarding the common polymorphisms in NOD2 gene and the associated diseases.
As the residues within the LRR domain have a critical role for the response to MDP, we predicted the potential effects of common LRR polymorphisms on the structure of NOD2 by computational analysis and discuss how these variations could change NOD2 function in interaction with pathogenic particles.
© Text is available under the terms and conditions of the Creative Commons Attribution (CC BY) license (http://creativecommons.org/licenses/by/4.0/)
Help
Top