Dietary fatty acids (DFAs) play key roles in different metabolic processes in humans and other mammals. DFAs have been considered beneficial for health, particularly polyunsaturated (PUFAs) and monounsaturated fatty acids (MUFAs).However both polyunsatyrated and saturated DFAs are both present in normal diet. On the other hand , microRNAs (miRNAs) exert their function on DFA metabolism by modulating gene expression and have drawn great attention for their potential as biomarkers and therapeutic targets. DFAs have been shown to induce and repress miRNA expression associated with metabolic disease and inflammation in different cell types and organisms, both in vivo and in vitro, depending on varying combinations of DFAs, doses, and the duration of treatment.

It has been reported that immortalized human hepatocytes treated with oleic acid-induced steatosis represent a valuable model for the study of genetic and functional factors involved in the process of lipid accumulation and liver injury [26]. Interestingly, phosphatase and tensin homolog (PTEN) is a regulator of phosphoinositide 3-kinase signaling and an important tumor suppressor mutated/deleted in human cancers. PTEN deletion in the liver leads to insulin resistance, steatosis, inflammation, and cancer. It has been recently demonstrated that unsaturated fatty acids trigger steatosis by down-regulating PTEN expression in this model of hepatocytes via activation of a mammalian target of rapamycin (mTOR)/nuclear factor kappa B (NF-κB) complex. Additionally, unsaturated fatty acids upregulate the expression of miRNA-21, which binds to PTEN messenger RNA 3′-untranslated region and induces its degradation, involved in the physiopathology of steatosis [27] (Figure 1A, Hepatocyte). 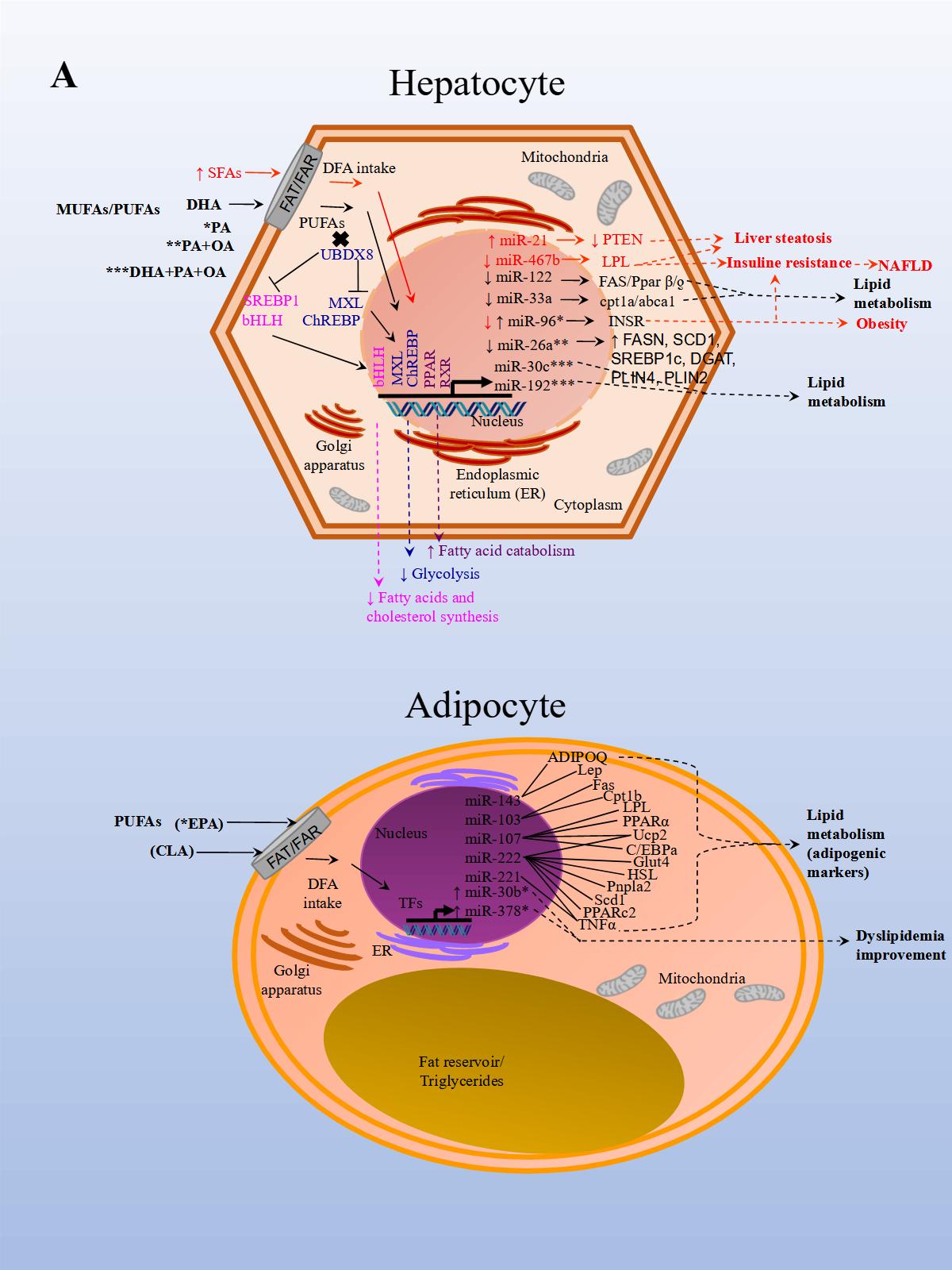 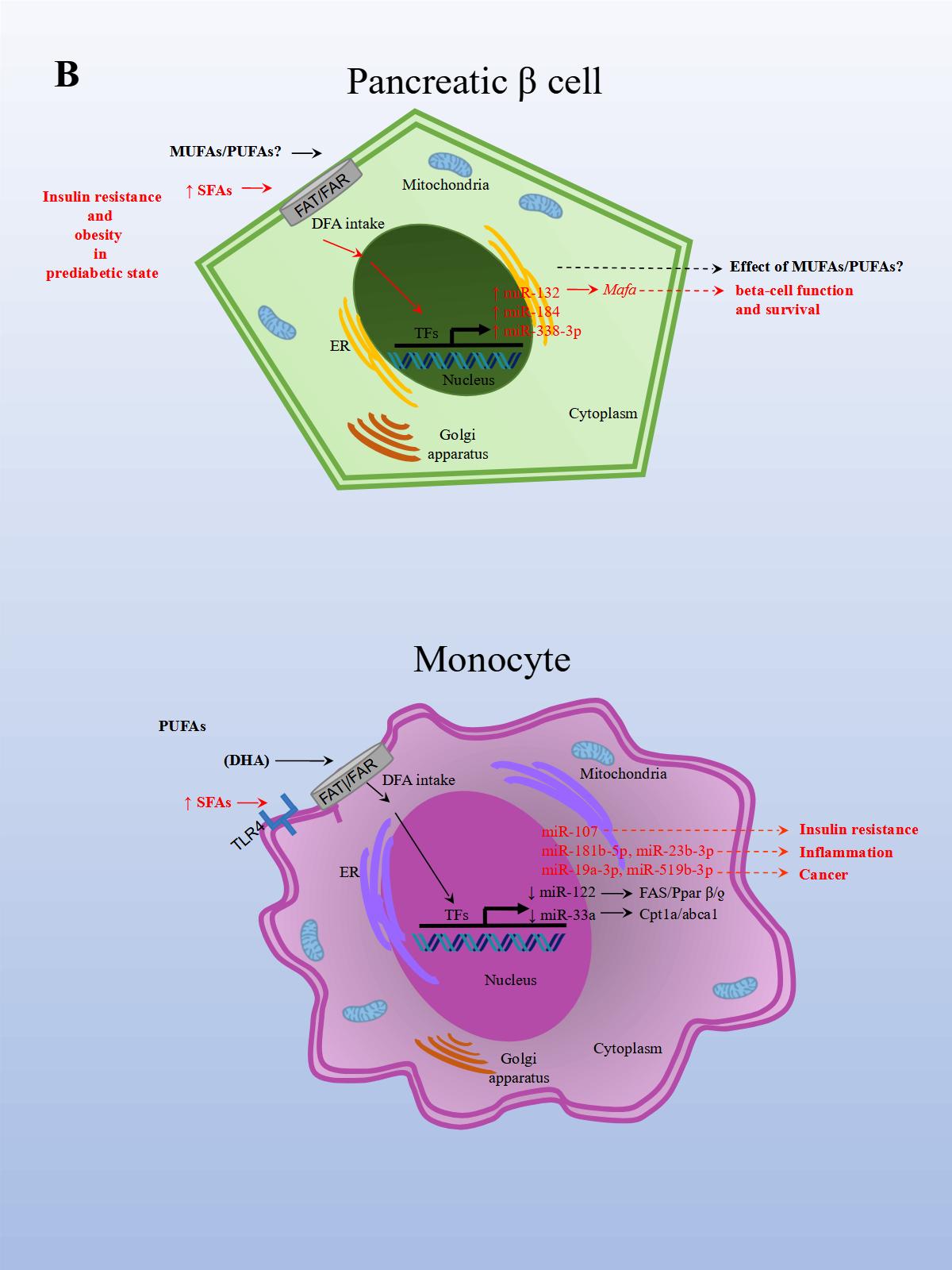 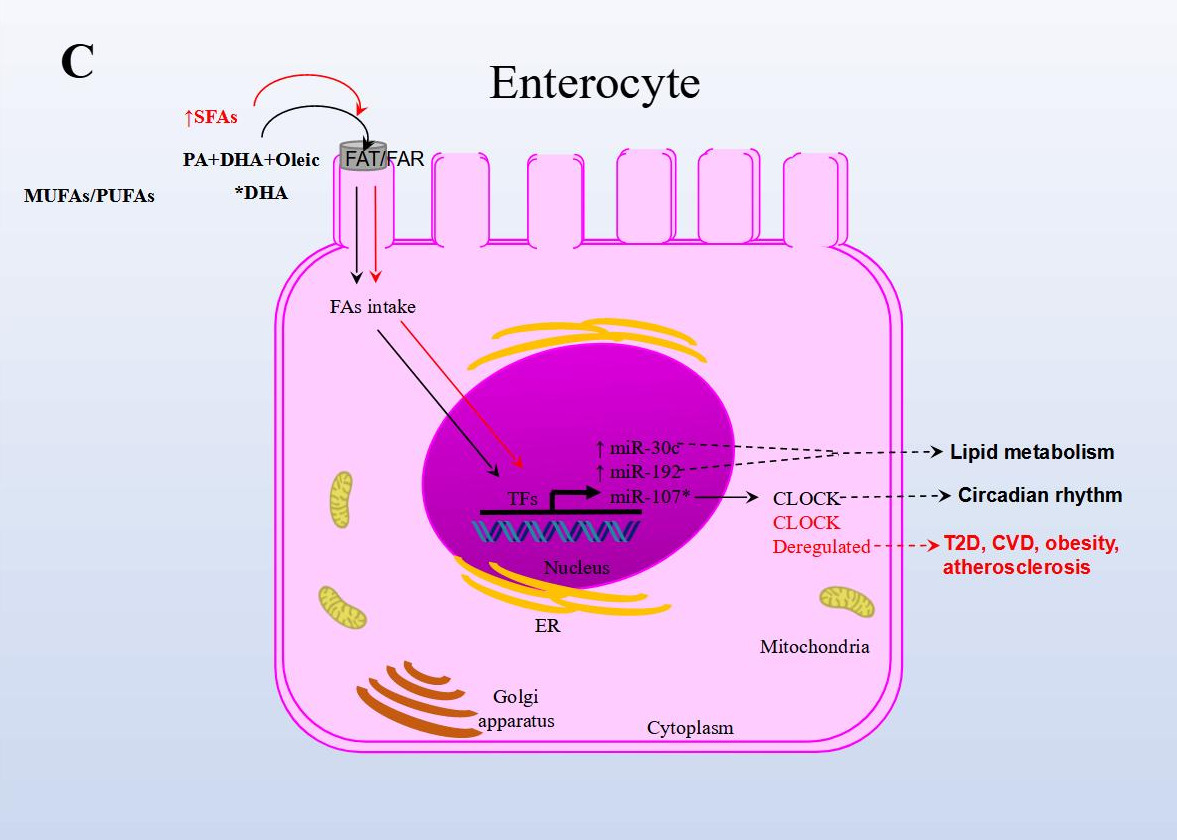 The effects of PUFAs on miRNA expression were assessed in a healthy population. The effect of DFAs in a PUFA-enriched diet, inferred from plasma fatty acid concentration, was linked to changes in circulating miRNAs. In the first experiment, 20 miRNAs were identified and differentially expressed in healthy women after consuming PUFAs in their diet. In a subsequent study, ten miRNAs were validated in both men and women in a larger group. Changes were seen in miRNA expression after eight weeks with daily walnut and almond intake [37]⁠. In particular, miR-221 and CRP (high-sensitivity C-reactive protein) expressions were repressed after treatment with PUFAs. In another study performed in a healthy population, the effects of a single dose of extra virgin olive oil (EVOO) were detected after four hours of intake. EVOO is a complex nutrient mix composed primarily of MUFAs (65.2%–80.8%). Other components include PUFAs (7.0–15.5%), tocopherols, squalene, pigments, and other compounds, such as phenolic compounds, triterpene dialcohols, and B-sitosterol (Jimenez-Lopez et al., 2020)⁠. Fourteen miRNAs were differentially modified, and seven were validated in peripheral blood mononuclear cells (PBMCs). The validated miRNAs have potentially beneficial effects on insulin resistance (i.e., miR-107), inflammation (i.e., miR-181b-5p, miR-23b-3p), and cancer (miR-19a-3p, miR-519b-3p), and may play an important role in preventing the onset of CVD and cancer [38]⁠.

A recent study aimed to analyze the effect of EPA (eicosapentaenoic acid) in brown adipose tissue (BAT) thermogenesis, which represents a target to promote weight loss in obesity. The effect of EPA treatment in mice after twelve weeks was analyzed in murine inguinal white and brown adipose tissue to demonstrate how brown fat and muscle cooperate to maintain normal body temperature. It has been shown that BAT can be stimulated to increase energy expenditure, and hence offers new therapeutic opportunities in obesity  [39]. The study reported that treatment with EPA increased oxygen consumption, but, importantly, modulated free fatty acid receptor 4 (Ffar 4), a functional receptor for ω-3 PUFAs, which enhanced brown adipogenesis through the upregulation of miR-30b and miR-378, and activation of cyclic adenosine monophosphate (cAMP) [40]⁠ (Figure 1 A, Adipocyte). In another study, both a HFD administered to mice for 14 weeks and palmitate treatment in HepG2 cells, induced miR-96 expression in the liver of the mice and the cells. miR-96 directly targeted insulin receptor (INSR) and Insulin receptor substrate 1 (IRS-1) and repressed gene expression post-transcriptionally. Additionally, the liver of HFD fed mice and the treated hepatocytes exhibited impairment of insulin-signaling and glycogen synthesis, revealing miR-96 as a promoter of hepatic insulin resistance pathogenesis in obese states [41] (Figure 1 A, Hepatocyte).

Although the consumption of high quantities of TFAs associated with CVD risk and a decrease in HDL has been well established, the effect of ruminant TFAs (rTFA, naturally occurring in ruminant meat, and milk fat) on metabolic markers was reported until only recently. The next study analyzed the HDL-carried miRNA expression of two of the most abundant HDL-carried miRNAs found in plasma. After nine men were given a diet high in either industrial TFAs (iTFAs, produced industrially by partial hydrogenation of vegetable oils), or rTFAs, designed in a previous study that measured the effect of rTFAs on metabolic markers [42]⁠, miRNA expression was measured in blood plasma. miR-223-3p concentrations correlated negatively with HDL levels after a diet high in iTFAs, and positively with C-reactive protein levels after a diet high in rTFAs. Conversely, miR-135-3p concentrations correlated positively with both total triglyceride levels after a diet high in iTFAs, and with LDL levels after a diet high in rTFAs. The results suggest that diets high in TFAs, whether of industrial or ruminant origin, alter HDL-carried miRNA concentrations, and are associated with changes in CVD risk factors [10]. One year later in a similar study model, the same group analyzed whether diets with different concentrations of iTFAs or rTFAs modify contributions of HDL-carried miRNAs associated with CVD, to the plasmatic pool. HDL-carried miR-103a-3p, miR-221-3p, miR-222-3p, miR-376c-3p, miR-199a-5p, miR-30a-5p, miR-328-3p, miR-423-3p, miR-124-3p, miR-150-5p, miR-31-5p, miR-375, and miR-133a-3p varied in contribution to the plasmatic pool after diets high in iTFAS and rTFAs were given. The results show that diets high in TFAs modify the HDL-carried miRNA profile, contribute differently to the plasmatic pool, and suggest that these miRNAs may be involved in the regulation of cardioprotective HDL functions [43]⁠.

In another NAFLD model, the effect of fish oil on miRNA expression in rat liver tissue was analyzed. Animals were either fed a diet rich in lard alone or supplemented with fish oil. The results from sequencing identified 79 miRNAs as differentially expressed in the group supplemented with fish oil compared to the control group. Importantly, the repressed expression of rno-miR-29c target-regulated the expression of Period Circadian Regulator 3 (Per3), a critical circadian rhythm gene associated with obesity and diabetes. rno-miR-328 expression was induced, and target-regulated Proprotein Convertase Subtilisin/Kexin Type 9 (Pcsk9), a gene that plays a crucial role in LDL receptor degradation and cholesterol metabolism. Finally, miR-30d expression was induced and in turn regulated the expression of its target Suppressor Of Cytokine Signaling 1 (Socs1), a gene involved in immunity and insulin and leptin signaling, respectively [44]⁠.

The results of these studies also demonstrated that miRNA expression is modified by DFA intervention which in turn regulates genes involved with obesity, NAFLD, CVD, and other metabolic diseases. Interventions with unsaturated FAs seem to have a beneficial effect on metabolism while the opposite seems to occur with SFAs and TFAs.

The consumption of DFAs had traditionally been associated with inflammation, with the inflammatory response depending on the amount and type of DFAs consumed. However, controversy exists, as recent studies have also demonstrated that high fat and ketogenic diets with SFAs, do not increase serum saturated fat content in humans, and are not associated with increased inflammation [45]⁠. In previous studies, it was reported that meals high in fat content promote translocation of endotoxins, mainly lipopolysaccharide (LPS) produced by the gut microbiome, into the bloodstream. LPS stimulates the inflammatory response which may be both acute and chronic. SFAs may also induce inflammation by mimicking the actions of LPS [46]⁠. Firstly, SFAs are an essential structural component of bacterial endotoxins [47]. Additionally, DFAs can promote endotoxin absorption [48]⁠. Lastly, pro-inflammatory compounds in food may be absorbed and prompt the inflammatory response directly by stimulating Toll-like receptors [49]⁠ found on cells of the innate immune system that lead to NF-kB activation and proinflammatory cytokine expression  [50][51]⁠. It has also been reported that as postprandial lipemia is strongly correlated to endotoxin absorption, the addition of PUFAs and MFAs in the diet reduces LPS pro-inflammatory activity [46][52]⁠. Diets high in SFAs have been shown to promote metabolic endotoxemia not only through changes in the microbiome and bacterial end-products, but also alter intestinal physiology and barrier function, and enterohepatic circulation of bile.

The overall data reported in this review indicate that DFAs play key roles in lipid metabolism by modulating miRNA expression. Importantly, both unsaturated fatty acids and SFAs may exert positive or negative effects in different cell types and organisms, both in vivo and in vitro, depending on varying combinations of DFAs, doses, and the duration of treatment. Notably, DFAs modulated miRNA expression related to metabolic parameters in human serum in both healthy individuals and patients with metabolic syndrome in as little as four hours [38]. Other data showed that DFAs modulated miRNA expression prior to the onset of disease [35], suggesting that miRNAs prime cells long before metabolic dysfunction, thus emphasizing the importance of miRNAs both as regulators of metabolism and possible therapeutic targets. However, studies are heterogeneous and limited concerning methodologies and models. Nevertheless, the published novel findings hold promise for the treatment of human metabolic disease and to maintain health by DFA interventions. Notwithstanding, further studies are needed that incorporate molecular approaches and biological systems together with omics technologies to add evidence to the reported data and advance therapeutic strategies in human health and disease.