Several genes involved in the development of hematolymphoid malignancies are located at the 9p24 locus. This includes key targets of immune checkpoint inhibition such as programmed death ligands 1 and 2 (PDL1/PDL2), which evokes potential therapeutic interest (rev. in [1] and in other contributions within this special issue). Most investigated cases of cHL show genetic alterations of PDL1/2, most commonly copy number gains and amplifications (up to 55% and 35%, respectively) [2]. In cHL—mainly the nodular sclerosis subtype—these copy number gains were found to correlate with higher expression of PDL1 as determined by immunohistochemistry (Figure 2A). They represent the hallmark of tumor-induced immune modulation mainly impeding effector T-cell proliferation and activation as well as stimulating immunosuppressive regulatory T-cells [21][12][3][4]. In a minority of cases, structural abnormalities of 9p24 have been found in cHL (Figure 2B, insert), leading to translocations of PDL1/2 to several partners [5]. Single nucleotide mutations, insertions and deletions of PDL1/2 are not (yet) found to play a major role in lymphomagenesis [1]. 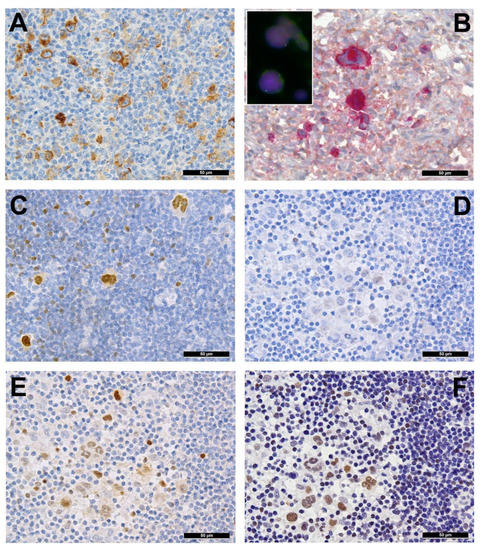 Inactivating mutations of the beta 2 microglobulin gene (B2M) also play an instrumental role in immune evasion, influencing the assembly of MHC class I and thus altering tumor cell “visibility” for effector cells [1]. Indeed, B2M is the most commonly mutated or deleted gene in up to 70% of studied cHL cases [10][11]. Furthermore, its deficiency is associated with the nodular sclerosis subtype, pointing towards its potential influence on the tumor microenvironment [7,9,16][7][9][12]. Wienand et al. additionally detected mutations or deletions of HLA-B in approximately 15% of cHL, representing another potential mechanism of MHC class I assembly dysregulation. Moreover, the MHCI (and MHCII) loci at 6p21 are among the commonly deleted in cHL [1213][1314][11]. Interestingly, a decrease of MHC class I expression is associated with inferior clinical outcome after standard chemotherapy, but not immune-checkpoint inhibition. To be comprehensive, Epstein-Barr virus (EBV) positive cHL have significantly higher MHC class I expression on HRS cells than EBV-negative cases [11][1415]. In contrast to MHC class I, the expression of MHC class II is predictive for response to PD1-blockade in cHL [24][16], fitting well with the above-mentioned observations on the central role of immune responses linked to the CD4+ cellular compartment.

Finally, the MHC class II transactivator CIITA has been identified to be involved in a gene fusion in cHL cell lines and in 15% of investigated clinical cases [1517]. Genomic aberrations in CIITA result in a downregulation of surface MHC class II expression as well as overexpression of PDL1/PDL2, hampering anti-tumor immune response.

A complex network of cytokines and chemokines secreted by both malignant and reactive cells orchestrates the interaction between HRS and LP cells, respectively, and the surrounding microenvironment [1612]. One component of this network is the immunosuppressive effect of transforming growth factor-beta (TGF-β) on tumor-infiltrating lymphocytes. Until recently, it was unclear why HRS and LP cells remain unaffected by the anti-neoplastic properties of TGF-β. Previous studies on diffuse large B-cell lymphoma (DLBCL) revealed SMAD1 as a key messenger in the tumor-suppressive signaling axis of TGF-β [30][18]. In concordance with this study, our group was able to show a lack of SMAD1 expression due to hypermethylation of its promoter region in LP and HRS cells of almost all studied clinical cases (14/14 NLPHL cases, 100% and 138/143 cHL cases, 97%). Most interestingly, this mechanism was reversible in an affected cell line by treatment with decitabine, a DNA methyltransferase inhibitor [1719].