Hydrogen sulfide (H2S), the third gasotransmitter, has emerged as a crucial regulator of cardiovascular homeostasis [7][8][9][7–9]. H2S exerts multifaceted biological functions, including vasodilatation, angiogenesis, antioxidant, anti-inflammation, mitochondria bioenergetics, and antiapoptosis [10][11][10,11]. In this regard, H2S-releasing drugs have been considered as potential therapeutics for CVD [7][8][7,8]. It is noteworthy that the DOHaD concept provides a strategy termed reprogramming to reverse or postpone the programming processes in early life, accordingly protecting offspring against many adult diseases of developmental origins [12]. Emerging evidence suggests that H2S can be used as a reprogramming strategy in hypertension of developmental origins [13]. Although H2S has been shown to have beneficial effects on CVD [7][8][7,8], whether it could serve as a reprogramming intervention for developmental origins of CVD remains largely unclear.

H2S, a colorless gas with a characteristic foul odor of rotten eggs, was first identified as an environmental toxin in the 1700s and opened three centuries of research into its biological roles [14]. In the late 1990s, H2S was reclassified as the third gaseous signaling molecule, alongside nitric oxide (NO) and carbon monoxide (CO) [10]. Currently, H2S is known as a ubiquitous second messenger molecule with important functions in cardiovascular physiology [10][15][10,15]. Much of the previous work investigating the actions of H2S has been directly focused on incident CVD; however, there is a growing need to better understand the mechanisms and pathways of H2S signaling in CVD of developmental origins.

Figure 1 illustrates three major pathways of H2S synthesis, including enzymatic pathway, nonenzymatic pathway, and bacteria origins. Three enzymes have been identified to enzymatically generate H2S, cystathionine β-synthase (CBS), cystathionine γ-lyase (CSE), and 3-mercaptopyruvate sulphurtransferase (3MST) [10]. CBS and CSE are cytosolic enzymes, but 3-MST is mainly existing in the mitochondria. l-cysteine is the principal substrate for both CBS and CSE to generate H2S. CBS and CSE can also produce H2S using other substrates. Homocysteine can be catalyzed by CBS to generate cystathionine, followed by CSE to produce l-cysteine. All of the above-mentioned H2S-generating enzymes are expressed in the heart and blood vessels [10][16][10,16]. In an alternative pathway, 3-mercaptopyruvate, the substrate for 3-MST to produce H2S, is provided by cysteine aminotransferase (CAT) and D-amino acid oxidase (DAO). In the peroxisome, d-cysteine can be catabolized by DAO to generate H2S [17]. Besides the enzymatic pathway, H2S can be nonenzymatically produced through thiosulfate, glucose, polysulfides, glutathione, and elemental sulfur. 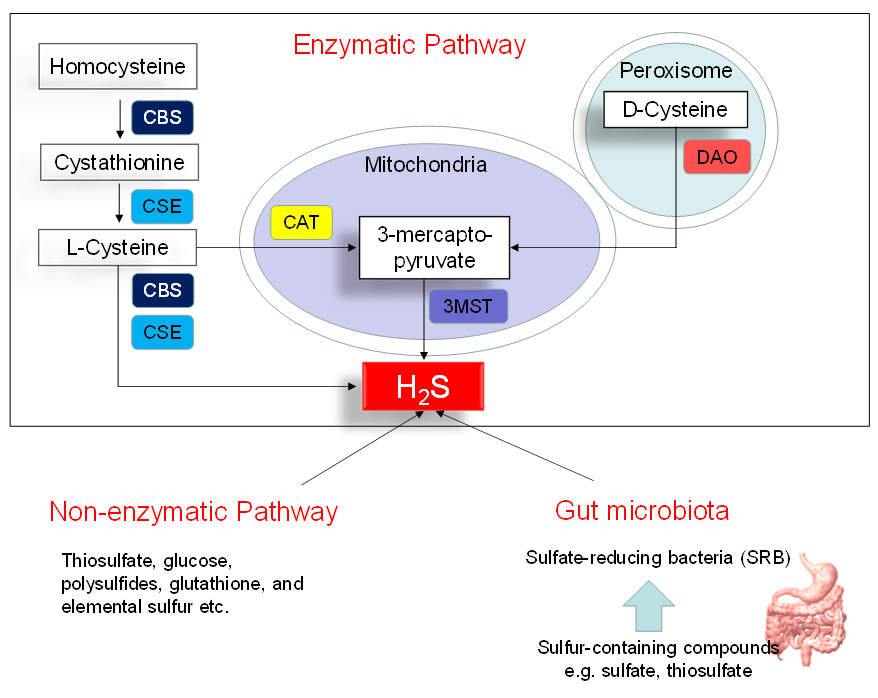 Fourth, several H2S-releasing drugs have demonstrated considerable promise for beneficial effects against CVDs in various animal models [7][8][7,8]. As reviewed elsewhere [7], several cytoprotective actions of H2S have been reported in the heart and vasculature. In the heart, the protective effects of H2S signaling was related to anti-inflammation, antiapoptosis, reduction of oxidative stress, and antifibrosis that leads to cardiac remodeling and functional improvements. In the vessels, H2S signaling can preserve endothelial NO synthase (eNOS)-derived NO production, while reducing oxidative stress, inflammation, fibrosis, and smooth muscle cell proliferation.

Hypertension is a key risk factor for multiple CVDs. Like NO, H2S is a vasodilator. H2S has been reported to relax various blood vessels, such as the rat thoracic aorta, portal vein, and peripheral resistance vessels [28][29][30][28–30]. The involvement of H2S deficiency in hypertension has been examined in various animal models of hypertension, including the spontaneously hypertensive rat (SHR) [31], the renovascular hypertensive model [32], Dahl salt-sensitive rats [33], and NO-deficient rats [34]. Conversely, several prior studies have shown the beneficial effects of exogenous and endogenous H2S on hypertension, as reviewed elsewhere [35]. However, little is known about whether these H2S-based therapies could be used as reprogramming interventions perinatally to reduce the vulnerability to developing cardiovascular programming in offspring.