. Primed CTL form IS with target cells resulting in a specific killing. In addition, mature IS formation can induce T lymphocyte anergy or activation-induced apoptosis (AICD) 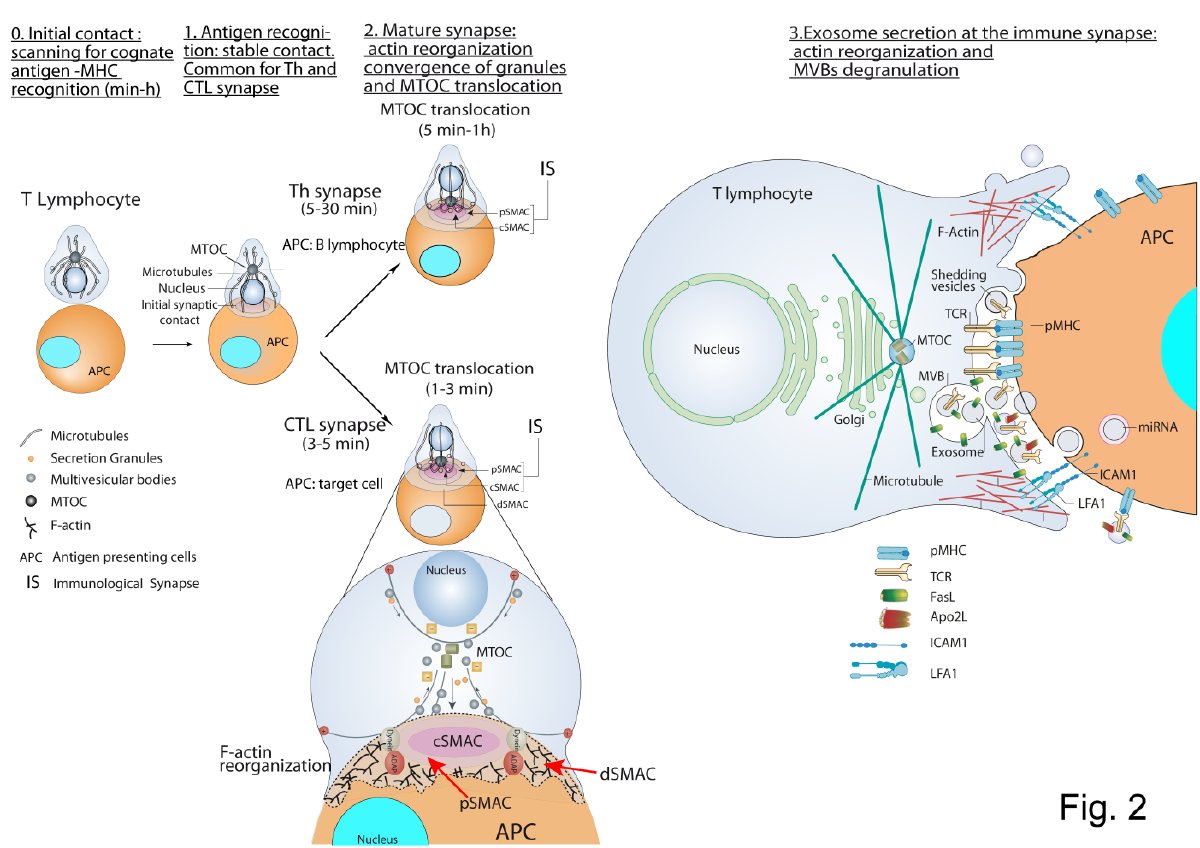 T lymphocyte—antigen-presenting cells (APC) immune synapse (IS) and polarized secretion. Stages 0 and 1 are common for both Th and cytotoxic T lymphocytes (CTL) IS. After the initial scanning contact of TCR with pMHC on APC, Th effector T lymphocytes (upper panel) form mature IS with antigen-presenting B lymphocytes within several minutes. This IS lasts many hours during which de novo cytokine (i.e., IL-2, IFN-γ) production and secretion occur, which require continuous T-cell receptors (TCR) signaling. Primed effector CTL (lower panel) establish more transient, mature IS after scanning their target cells (i.e., a virus-infected cell), and deliver their lethal hits within a few minutes. Secretory lysosomes (lytic granules) are very rapidly transported (within very few minutes) towards the microtubule organization center (MTOC) (in the minus “–“ direction) and, almost simultaneously, the MTOC polarizes towards the central supramolecular activation complex (cSMAC) of the IS, an F-actin poor area that constitutes a secretory domain. MTOC translocation to the IS appears to be dependent on dynein anchored to the Adhesion and Degranulation Promoting Adapter Protein (ADAP) at the peripheral SMAC (pSMAC), which pulls MTOC in the minus direction. In both types of IS (lower zoom panel), the initial F-actin reorganization in the cell-to-cell contact area, followed by a decrease in F-actin at the cSMAC and an accumulation at the distal SMAC (dSMAC) appears to be involved in granule secretion. In stage 3, MVB fusion with the plasma membrane occurs in both types of IS and leads to TCR-containing exosome polarized secretion at the IS. The exosomes released in Th IS contain proapoptotic FasL and Apo2L and can induce target cell death or Th cell death (AICD). TCR–containing shedding microvesicles have been described in Th IS.

CTL-target cell IS induces the rapid polarization (from seconds to few minutes) of CTL MTOC and lytic granules (secretory granules or secretory lysosomes-SL-with MVB structure) towards the central supramolecular activation cluster (cSMAC) at the IS (Figure 1). Lytic granules fusion with the plasma membrane (degranulation) induces the secretion of certain cytotoxic factors such as perforin and granzymes to the synaptic cleft, triggering target cell apoptosis

. Upon degranulation, FasL located at the secretory granule limiting membrane becomes exposed to the plasma membrane at the IS and induces target cell Fas crosslinking leading to target cell apoptosis

Another consequence of degranulation is ILV secretion as nanosize EV at the CTL-target cell synaptic cleft, first described by Peters et al.

. Although the vesicles secreted by CTL were not referred at that time as exosomes, their formation and mode of exocytosis justifies such a nomenclature

, providing an alternative mechanism of TCR-controlled AICD that does not necessarily imply cell-to-cell contact

. Moreover, it was shown that upon TCR triggering T lymphoblasts secrete exosomes

. CTL MTOC reorientation is initially guided by a diacylglycerol (DAG) gradient centered at the IS

, generated by TCR-stimulated phospholipase C (PLC). DAG phosphorylation by diacylglycerol kinase α(DGKα) is involved in the spatiotemporal control of the DAG gradient

and MTOC polarization to the IS in CTL

. DAG activates, among others, several members of the PKC and PKD families

, such as PKCδ, which is necessary for the polarization of lytic granules and cytotoxicity in mouse CTL

. Th IS are more stable and longer (from minutes up to several hours) than CTL IS (few minutes)

. Th IS are required for both directional and continuous cytokine secretion

as CTL lytic granules. Although the identity of the cytokine-containing secretory vesicles has not been characterized yet

they, most probably, are not MVB

, suggesting that exosome secretion is a general consequence of T lymphocyte activation. IS formation by CD4

Jurkat cells and superantigen-coated Raji B cells acting as an APC, which constitutes a well-established IS model

, induces polarized MVB traffic towards the IS, MVB degranulation and exosome release

(Figure 1, right side panel). In this Th-APC IS model, a positive role of TCR-triggered DAG and its regulator DGKα

, in polarized MVB traffic towards the IS was demonstrated

, and MTOC and lytic granules polarized traffic in CTL (described above), DAG and DGKα can be considered as general regulators of polarized traffic . DAG-activated PKCδ is needed for cortical actin reorganization at the IS, MTOC and MVB polarization to the IS and exosome secretion in this IS model

. Overall, this leads us to hypothesize that an altered actin reorganization at the IS may underlie the deficient MVB polarization occurring in PKCδ-interfered T cell clones

, suggesting that several regulatory points in exosome secretion are controlled by DAG.

(Figure 1, right side panel). These shedding vesicles were enriched in TCR and capable to trigger B-lymphocyte signaling via pMHC-II stimulation

. Thus, it appears that distinct types of EV from Th lymphocytes are secreted at the IS. Further research will be necessary to establish whether these subtypes of EV trigger different Th effector responses or, on the contrary, redundantly or synergistically trigger the same responses.