In chemistry, potential of hydrogen, or pH, is a data describing the acidity or the basicity of a medium [1]. Logarithmically obtained from H+ ion concentration, pH is one of the main physical characteristics used to describe an aqueous solution. Since the development of pH-meters, its measurement became inevitable across scientific fields, such as drinking water [2], industrial waste [3][4][3,4], global health [5], and agronomy [6]. As acidic or basic compounds are continuously released as outputs of cellular life, pH monitoring offered a unique opportunity to easily acquired data from biologic systems [7]. The relevance of pH in biological systems can be observed at different scales: the pH of biological fluids is well described and its regulation essential to the proper function of organs, since abnormal values are both the sign and cause of disease developments. pH regulation within biological systems relies on a sensitive equilibrium, called pH homeostasis. At the organism level, pH regulation is performed by the lungs through the elimination of CO2 and the kidney through the filtration of the HCO3− ion. In cells, where organic acids, such as lactic, pyruvic, or beta-hydroxybutyrate acids are produced along metabolic pathways, some membrane proteins compensate the decrease of pH by transporting protons outside the cytosol [8]. Thus, cellular pH monitoring leads to the understanding of key milestones within cells, such as proliferation [9], ion transport [10], or carcinogenesis [11]. For example, unchecked biological processes occurring in malignant cells release a consequent amount of acid derivatives, leading to a pH decrease in tumoral tissues [12]. In microbiology, proliferations of aerobic bacteria also lead to a massive production of acidic metabolites, which quickly induce pH variations in medium [13]. Whereas global pH in cytosol has to be regulated, each organelle is fully effective in specific ionic environments, which are often correlated to local functions [14]. For example, the average pH in lysosomes, Golgi network, and mitochondria are 4.7, 6.7, and 8 respectively. Thus, pH monitoring of each organelle has helped to determine their function. At an atomic scale, all metabolism pathways are directly correlated to pH since enzymatic activities and kinetics depend on ionic environments. Another common example is the classification of essential amino acids, according their acidic or basic trends. Thus, pH is an important physicochemical datum, which can attest of biological activities at different scales. In order to monitor these fluctuations without any physical contact, fluorescent pH-sensitive probes were developed during the last century. Under specific light, these molecular probes re-emit photons at another wavelength for which related intensity depends on the surrounding pH [7]. Since optical devices are continuously becoming more precise, especially with the broad dissemination of optic fibers, pH-sensitive molecular probes are recurrent across biological studies. 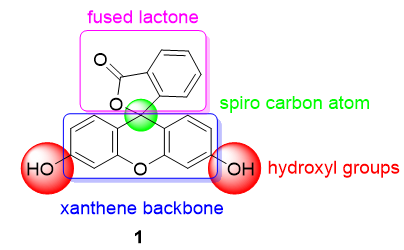 Originally obtained by condensing phtalic anhydride with phenol in acidic conditions by Von Baeyer, this preparation of fluorescein 1 is nowadays based on Friedel–Crafts reactions (Figure 3). Thus, the fluorophore can be easily obtained by mixing phtalic anhydride, resorcinol and ZnCl2 or methanesulfonic acid [18][19][18,19]. Large scale manufactured, fluorescein 1 has been included in the World Health Organization (WHO)’s model list of essential medicines [20] for its biological applications, but it is also used in other fields, such as petrochemistry for leak detection and cosmetic formulations.

FITC 2 is one of most used derivatives due to its properties and good reactivity for conjugation. In comparison to fluorescein, FITC 2 presents a slight decrease of fluorescence quantum yield (ΦF (excitation: 500 nm): 0.75 in 10 mM Phosphate-Buffered Saline) [26]. However, in comparison with other fluorophores, FITC 2 still has an intense fluorescence and can be used as a pH-sensitive probe around the neutral domain. FITC 2 can be easily associated to any kind of chemical structures bearing an amine fragment, such as fluorophores [27], targeting agents [28], proteins [29], polymers [30], or nanoparticles [31]. Resulting bioconjugation linkage is based on a thiourea function for which stability depends on physiochemical surroundings due to its strong H-bond interactions [32][33][34][32–34]. Using such derivatives offers a unique opportunity to create specific pH sensors, and particularly, for biological systems where all proteins are bearing a terminal amine. Even if FITC 2 is still the most prolific derivative in literature (Figure 6), new fluorescein reactive derivatives are still described with optimized properties [35].

When fluorescein was used for intracellular pH (pHin) monitoring, a high leakage rate appeared from the cells, which made accurate pH determination difficult. Fluorescein 1 was then replaced by carboxyfluorescein 3 (FAM or CF) as the main pHin probe, since its main advantage was its low leaking rate through cell membranes. Indeed, due to its additional carboxylic acid function, the supplementary anionic charge significantly reduces solubility of FAM 3 in lipid structures composing cell membranes [36] Moreover, FAM 3 has similar photophysical properties to FITC 2 [26]. Thus, FAM 3 has become one of the most used probes for characterization of tumoral tissue [37]. FAM 3 can also be used for preparation of bioconjugates using carbodiimide/NHS activation. In this case, resulting amide function is stable due to its omnipresence in biological systems. Diacetate derivatives of fluorescein and FAM 3, respectively named fluorescein di-acetate (FDA) and carboxyfluorescein di-acetate (CFDA) (Figure 7-5), were also been used across several studies [38][39][38,39]. Di-ester analogs present a quenching of the fluorescence, but, under esterase intracellular activities, emissions are restored [40]. Thus, these derivatives are used to estimate intracellular enzymatic activities [41]. Moreover, in comparison of FAM 3, which is used for its weak membrane permeability, diacetate derivatives are cell permeable probes. Thus, CFDA 5 is one of best pHin sensors because FAM 3 is directly released under intracellular enzymatic activities and is not able to leak outside cells.