Submitted Successfully!
Thank you for your contribution! You can also upload a video entry related to this topic through the link below:
https://encyclopedia.pub/user/video_add?id=784
Check Note
2000/2000
Seed Banking Effectiveness
Edit
Upload a video
This entry is adapted from 10.3390/plants9050581

Understanding seed viability under long-term storage conditions provides basic and useful information to investigate the effectiveness of seed banking. Besides the germination success, seedling establishment is also an important requirement, and a decisive step to ensure plant propagation. We used comparative data of germination, seedling growth, and survival percentage between fresh and 10-years-stored seeds of Senecio morisii, a narrow endemic and vulnerable species of Sardinia (Italy), in order to evaluate if differences exist in these traits. Stored seeds showed higher germination percentages than fresh ones, whereas seedling growth and survival did not present significant differences between them, except for seedling growth in plants produced from seeds germinated at 25 °C. This study allowed us to assess if seeds of S. morisii were able to germinate under controlled conditions, and if they maintained their viability and germination capacity for at least 10 years of long-term storage in the seed bank. In addition, the high seedling survival detected in both fresh and stored seeds suggests that stored seeds of S. morisii can be used to support reinforcement or reintroduction actions when fresh materials are not available. 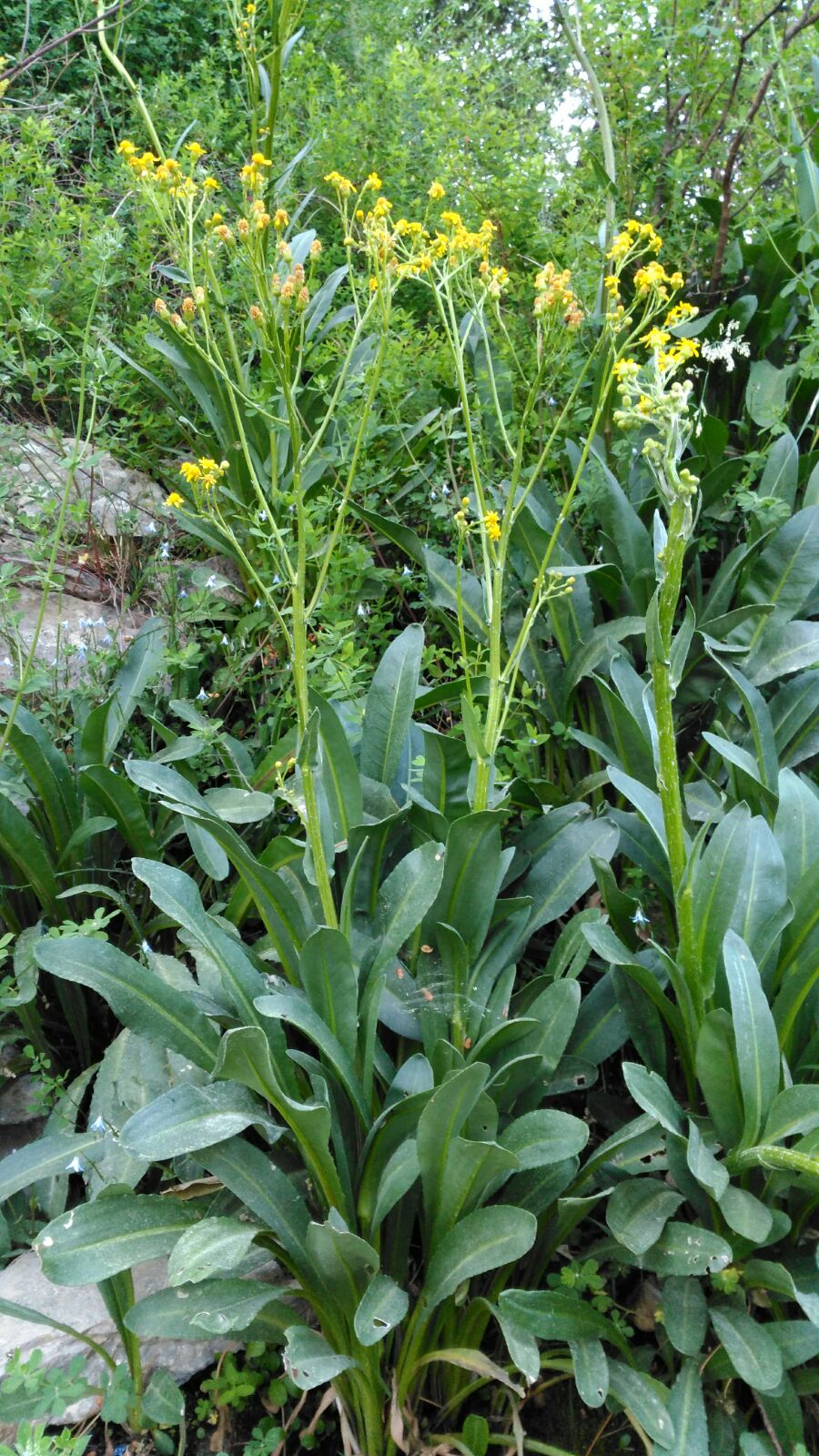 Seed banking, as an integral part of the ex situ conservation, has a pivotal role in safeguarding plant species for long times in order to avoid loss of genotypes from populations. Ex situ conservation is complementary to in situ methods, serves as a source of material for in situ conservation actions [1][2][3] and, for some species, it might be the only option for their preservation [4][5]. About 45% of Europe’s vascular plants are considered threatened, according to IUCN criteria [6]. Furthermore, Target 8 of the Global Strategy for Plant Conservation (GSPC) calls for “at least 75% of threatened plant species in ex situ collections, preferably in the country of origin, and at least 20% available for recovery and restoration programmes” [7][8]. Therefore, extra attention is necessary to ensure the ex situ conservation of endangered plants in seed banks and to develop effective germination and multiplication protocols for these species.

Seed banking is a particularly important conservation strategy for species with orthodox seeds (desiccation-tolerant, sensu [9]). These seeds can be gradually dried at 15 °C and 15% of relative humidity (RH), in order to reach ca. 3%–5% of internal seed moisture content, and then stored safely at temperature near to −18 and −25 °C [10]. Seed storage conditions maintain germplasm viability for several years, but even under suitable conditions, viability might decline over time [11]. Seeds of some species can remain viable for hundreds of years, while seeds from other species can only survive for few years [12][13]. For this reason, it is necessary to assess periodically the viability of seeds stored in seed banks. International guidelines and standards indicate that the viability of stored collections should be tested every five or 10 years [12][14][15][16][17]. Loss of seed viability and seed dormancy due to seed ageing have been found in many species [13][18][19][20], and are caused by metabolic changes and DNA deterioration [21].

Seed germination studies have also been suggested to be performed in order to evaluate the effective viability of stored seeds [22]. For instance, seedling establishment and survival are vital to guarantee the persistence and multiplication of plant populations, and the successive effectiveness of restoration strategies [23]. Consequently, knowledge of the germination process, seedling establishment, and survival of threatened species are important for conservation practitioners, enabling them to produce plants and to increase the chance for establishment of self-sustaining populations [24][25].

We studied the germination capacity of a threatened and narrow endemic species of Sardinia (Italy), Senecio morisii J.Calvo & Bacch. Existing within the genus Senecio L. (Asteraceae), one of the largest genera of flowering plants, almost cosmopolitan and occurring in all the five regions with a Mediterranean climate [26], this species forms part of the Senecio doria L. group, a species complex of perennial herbs from Europe, western and central Asia, and northwestern Africa [27]. S. morisii was recently described from central-eastern Sardinia; it is a hygrophilous species which grows on water meadows or watersides with calcareous soils (limestones, travertines, and conglomerates) [27]. In particular, it lives along the edges of streams in woods of Ostrya carpinifolia Scop. accompanied by Taxus baccata L. and Ilex aquifolium L., between elevations of 700–1200 m a.s.l. [27]. S. morisii flowers from late May to July; the ligulate florets produce achenes, subcylindrical and glabrous, at the end of July, and no information about its germination traits is currently available. Only six populations are currently known [27][28] and it was assessed as Vulnerable (VU) in the IUCN Italian Red List [29].

Senecio morisii is a vulnerable plant species endemic to Sardinia, for which ex situ conservation has become a necessary strategy. Knowing and understanding the complex elements that control seed longevity and germination are therefore of major ecological and conservational importance [30]. This is the first attempt, to our knowledge, to investigate the seed germination of fresh and stored seeds of S. morisii. The results show that both fresh and stored seeds are able to germinate under controlled conditions. In addition, the high viability detected in seeds stored for 10 years under seed banking conditions at −25 °C allows us to suggest their use in the absence of fresh material for management actions, like translocations and/or population reinforcements. Especially in the case of endemic and/or threatened plants, which may present problems related to the poor availability of material for plant propagation, seed banks can be decisive sources of material for translocations [31].

Seeds of S. morisii, collected in 2007 and then stored at −25 °C for 10 years, showed a broader germination temperature and higher germination rates, when compared with the fresh ones collected in 2017. Stored seeds presented a germination of approximately 70%, while the germination of fresh seeds of S. morisii was less than 42%. Compared with other species of the genus Senecio, this species presented similar requirements for the germination. For example, S. malacitanus Huter, that is native to the southwestern Mediterranean Basin, also germinated with high percentages in a wide range of temperatures, from 5 to 30 °C [32]. Furthermore, studies of S. vulgaris L. show that germination was also favored at 20 °C and higher temperatures [33][34]. The highest germination percentage of fresh seeds of S. morisii was found at 30 °C. This could be an adaptation derived from the dry conditions that occur in natural habitats of Mediterranean hygrophilous species. Usually, these species germinate during the driest season in order to avoid that seedling development would coincide with the occurrence of flooding, usually during cool seasons (i.e., autumn and winter). Specifically, after dispersal in early summer, S. morisii seeds experience a dry period (from July to September), characterized by high temperatures and low flow of the rivers or springs where this species grows.

To better understand the reason for the lower germination detected (less than 50%) in fresh seeds, we used seed viability percentage and DI as indexes. Firstly, the viability did not present statistical differences between stored and fresh seeds (except at 5 °C). Therefore, seed viability related to idiosyncratic causes influenced by the particular conditions of each year had not caused differences on germination, despite several studies that proved the interannual germination plasticity related to interannual climatic fluctuations [35][36]. Moreover, according to [2] and [13], high DI values (>0.4) of fresh seeds indicated the presence of some kind of dormancy. Thus, our results allow us to hypothesize that S. morisii fresh seeds may be partially dormant. Further studies are needed to evaluate this and define the type of dormancy [37]. Unfortunately, the extreme ability of the achenes to disperse by wind, the limited population size, and other threats of this species, such as the low number of flowering individuals due to overgrazing, were a limit for ensuring the availability of material for these experiments.

Even if seed germination was high at a wide range of temperatures, we detected that seedlings showed better growth performance and survival percentages when coming from germinated seeds at the incubation temperatures of 20 and 25 °C. This is in accordance with [38], who demonstrated that plant developmental processes are complex, but strongly dependent on incubation conditions.

Seed storage under gene bank conditions for 10 years had not affected seedling growth and survival percentage in the first stage of plant development. Indeed, seed viability and seedling establishment (survived after an experimental period of 120 days) were similar across the stored and fresh seeds. Interestingly, percentages of seedling survival were higher than 50% in all conditions.

These results provide information on seed germination and seedling establishment of this narrow endemic species, offering basic but useful information for the conservation efforts of S. morisii, where translocation actions are recommended due to its restricted distribution range (limited to six populations) and the intensive grazing that affects the conservation status of this vulnerable species.

More
© Text is available under the terms and conditions of the Creative Commons Attribution (CC BY) license; additional terms may apply. By using this site, you agree to the Terms and Conditions and Privacy Policy.
Upload a video for this entry
Information
Subjects: Plant Sciences
Contributors MDPI registered users' name will be linked to their SciProfiles pages. To register with us, please refer to https://encyclopedia.pub/register :
Alba Cuena Lombraña
,
Marco Porceddu
View Times: 305
Revisions: 3 times (View History)
Update Time: 30 Oct 2020
Table of Contents
1000/1000
Hot Most Recent