Submitted Successfully!
Thank you for your contribution! You can also upload a video entry related to this topic through the link below:
https://encyclopedia.pub/user/video_add?id=7173
Check Note
2000/2000
Takotsubo Syndrome
Edit
Upload a video
This entry is adapted from 10.3390/jcm10030468

Takotsubo syndrome (TTS) represents a form of acute heart failure featured by reversible left ventricular systolic dysfunction. The management during the acute phase is mainly performed with supportive pharmacological (diuretics, ACE-inhibitors/angiotensin-receptor blockers (ARBs), anticoagulants, antiarrhythmics, non-catecholamine inotropics (levosimendan), and non-pharmacological (mechanical circulatory and respiratory support) therapy, due to the wide clinical presentation and course of the disease. However, there is a gap in evidence and there are no randomized and adequately powered studies on clinical effectiveness of therapeutic approaches. Some evidence supports the use ACE-inhibitors/ARBs at long-term. A tailored approach based on cardiovascular and non-cardiovascular risk factors is strongly suggested for long-term management. The urgent need for evidence-based treatment approaches is also reflected by the prognosis following TTS. The acute phase of the disease can be accompanied by various cardiovascular complications. In addition, long term outcome of TTS patients is also related to non-cardiovascular comorbidities. Physical triggers such as hypoxia and acute neurological disorders in TTS are associated with a poor outcome.

Although Takotsubo syndrome (TTS) has been classically described as a benign condition, life-threatening acute complications have been described in 52% of patients, while 11% have more than two complications that contribute to higher mortality rate [1][2][3]. In-hospital death rate ranges from 2.4 to 4.1%, while rates of pulmonary edema and cardiogenic shock range from 6 to 9% and 9 to 11.4%, respectively [1][3][4].

In the acute phase, patients are generally treated with several supportive measures, pharmacological (beta-blockers, diuretics, anticoagulants, antiarrhythmics, non-catecholamine inotropics (levosimendan)), and nonpharmacological (mechanical circulatory and respiratory support), depending on the grade of heart failure and the existence of concomitant complications.

According to current literature “mild” form of TTS without the existence of acute heart failure require only therapy for comorbidities. However, no dedicated randomized trial has been published so far and few data come from adequately powered studies [5].

Beta-blockers were commonly used in the acute phase of TTS due to the possibility of blocking adrenergic surge effects. Actually, no benefit for beta-blockers at short- and long-term has been proven in TTS [5][6]. In a retrospective nationwide study, Isogai et al. found no significant association between early beta-blockers use (within first 2 days after admission) and in-hospital mortality in patients with TTS; there is therefore no evidence to support early beta-blockers use as routine practice in acute-phase management of TTS [7]. Short acting beta 1 blockers can be used only in case of left ventricular outflow-tract obstruction (LVOTO). Experimental data showed high density of β2-adrenergic receptors in the apical and midventricular segments of the left ventricle, while higher concentrations of β1-adrenergic receptors can be found in basal LV segments [8].

Esmolol, a β-1 cardio-selective blocker with a short half-life (9 min), may be an easily manageable tool for the treatment of patients with TTS and LVOTO. Santoro et al. found in a case series of 10 patients with TTS and LVOTO that Esmolol infusion was associated with a reduction of the intraventricular gradient (before infusion 47 ± 16 mmHg and after 18 ± 2 mm Hg, p = 0.01) and systemic blood pressure [9]. No adverse events were observed during esmolol infusion.

The reported incidence of cardiogenic shock (CS) in TTS ranges from 6% to 20% [10][11][12]. Acute management of CS in TTS is challenging because usual therapeutic options (e.g., catecholamines which are routinely advocated in cases of circulatory compromise) can be potentially harmful [13]. TTS patients treated with i.v. catecholamine may show highly compromised circulation and cardiac function, poorer in-hospital outcomes, and higher long-term mortality rates in comparison to patients not receiving any form of catecholamine support [14]. Again, it has to be taken into account that these data are derived from non-randomized studies.

However, considering the pathophysiology of the syndrome, the Heart Failure Association of the European Society of Cardiology (ESC) has recommended to avoid or withdraw exogenous catecholamines as they could probably prolong or exacerbate the acute phase of the syndrome by activating catecholamine receptors or their downstream molecular pathways [15].

Levosimendan is a non-catecholaminergic inotropic drug, commonly used in patients with acute heart failure; the drug may represent an option for TTS patients, but its use, is limited to patients with impaired systolic function, without LVOTO and with systolic arterial pressure ≥ 90 mm Hg. Clinical data from case series showed the safety and feasibility of this treatment in TTS patients [16]; no adverse events were reported, LVEF improved in all patients and none developed LVOTO. Levosimendan infusion should be performed preferably for 24 h at an infusion rate of 0.1 mg/kg/min without loading dose. Invasive hemodynamic and ECG monitoring should be performed during infusion and for the following 24 h due to a minimal risk of hypotension [17]. Moreover, although not reportedly in TTS patients, levosimendan infusion may be associated with an increased risk of tachy-arrhythmias [18].

IABP use has been evaluated in a European registry of 2250 TTS patients, where 42 patients with CS were treated with this approach. IABP use did not provide any benefit in term of in-hospital mortality, length of hospitalization, and need of invasive ventilation [20].

Recent data showed that there is a growing use of V-A ECMO and Impella in TTS patients with CS [21]. However, prospective studies are needed to evaluate the efficacy of different devices as well as their timing in this population.

1.2. Treatment of Arrhythmias in TTS

Life-threatening arrhythmias may occur during the acute phase of TTS in up to 8% of cases [22]. Data from the international multicenter GEIST registry suggest that the most common adverse rhythm disorders are ventricular arrhythmias and complete atrio-ventricular (AV) block [23], meanwhile InterTak registry showed an incidence of cardiac arrest in hospitalized patients of 8.1% [24].

Acute management of ventricular tachycardia includes a pharmacological approach with magnesium sulfate and/or short-acting β1-blocker or may require direct current cardioversion in case of sustained pulseless ventricular tachycardia. Of note, due to the high prevalence of prolonged QT interval in TTS patients during the acute phase [25], the use of amiodarone or sotalol needs to be evaluated for each case, after ECG recording. Moreover, all drugs potentially prolonging the QT interval such as antidepressants or antibiotics should be withdrawn immediately. In presence of torsade de pointes associated with QT-prolongation during hospitalization, short-acting β1-blocker (esmolol) or temporary pacing (in case of coexistent bradycardia) could represent an option (Figure 1).

Persistent high-grade AV block should be managed with permanent pacemaker implantation. All TTS patients with complete AV block who received a pacemaker showed a permanent pacing over follow-up suggesting that TTS probably occurred secondarily due to the rhythm disorder [26]; patients implanted with a permanent ICD, instead, did not receive any therapy at follow-up for malignant arrhythmias [27]. A careful assessment before ICD implantation is due in TTS patients, even in the case of severely reduced LVEF and concomitant ventricular tachyarrhythmias at index event. In the acute phase of TTS with enhanced vulnerability for adverse rhythm disorders, wearable defibrillator wests might also represent an option to prevent adverse heart rhythm events without permanent devices.

1.3. Treatment of Thromboembolic Events in TTS

LV thrombus formation has been reported in about 2.5% of all TTS patients and cardioembolic complications occur in 0.8% of this population [28]. Time of LV thrombi formation ranges from admission until 2 weeks after. Apical ballooning pattern, left ventricular ejection fraction ≤ 30%, previous vascular disease, increased C-protein levels, troponin-I levels > 10 ng/mL, and a white blood cell count on admission > 10 × 103 cells/μL are independent predictors of LV thrombosis [28][29][30].

A simplified approach regarding OAC therapy in patients with TTS through echocardiographic evaluation combined with laboratory data (troponin levels) should be used for the acute management (Figure 1). In case of an apical ballooning pattern and increased troponin-I admission levels (> 10 ng/mL), prophylactic OAC could be considered, also on the possibility of late thrombus formation. With apical ballooning without increased troponin admission levels, there is no indication for OAC. Additionally, patients with midventricular or basal ballooning and normal troponin levels do not require prophylactic OAC [28].

Despite data on long-term outcome from several registries, no randomized trial on pharmacological treatment has been published so far. Therefore, limited information is available and is mainly based on observational studies (Figure 2). 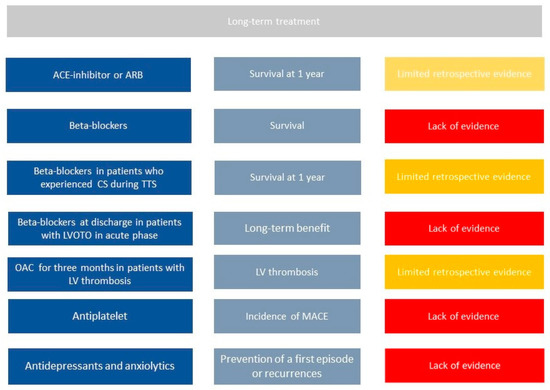 Templin et al., in one of the largest registries on TTS patients, found that the use of angiotensin-converting–enzyme inhibitors (ACEi) or angiotensin-receptor blockers (ARBs) is associated with an improved survival at 1 year; in contrast, according to the same registry, there is no evidence of any survival benefit from the use of beta-blockers (BBs) [3].

Chronic use of BBs has been commonly used on the base that BBs could prevent recurrence of TTs as countering the effect of increased catecholamine levels. However, no benefit in term of recurrence reduction or better survival have been proven [7]. Recently, results from an observational registry (RETAKO) showed that patients with cardiogenic shock who were discharged on BBs experienced lower 1-year all-cause mortality compared with those who did not receive BBs [1].

Long term use of antiplatelet drug still requires investigation. Recent studies showed that aspirin at hospital discharge did not relate to short- or long-term prognosis in a large population of TTS patients. The incidence of MACE in TTS patients discharged with aspirin was not significantly different when compared to patients without aspirin [31]. The protective effect of aspirin in acute cardiovascular diseases, however, is mainly related to the reduction of thrombotic events induced by platelet activation following plaque erosion or rupture. These mechanisms do not seem to play a significant role in TTS [32], because TTS apparently involves coronary microcirculation, and this could explain the lack of potential benefit associated with aspirin in TTS [33]. Therefore, according to current data, the routine use of aspirin should be avoided in TTS patients unless there are clinical conditions with high atherosclerotic risk or history of coronary artery disease as recommended by guidelines.

Oral anticoagulation should be prescribed long term among those patients with evidence of LV thrombi during hospitalization. Indeed, LV thrombi can be successfully managed with 3 months of OAC therapy with complete resolution of thrombosis [28]. Observational data suggest that in selected cases of apical ballooning pattern with increased levels of troponin, prophylactic oral anticoagulation for three months may also be considered.

Recurrence of TTS is not infrequent; the recurrence rate is approximately 1.5% per year [34]. Secondary prevention strategies to avoid such recurrence would be required. However, there is currently no therapy at discharge that proved to reduce the incidence of recurrence at follow-up [6]. Interestingly, a meta regression study that evaluated all published studies found that rates of recurrence are lower in populations treated with combination of ACEi/ARB and BBs [35][36]; however, these results need further investigations.

According to current data, other pathophysiological pathways such as inflammatory or energetic–metabolic need to be further explored to identify a suitable therapy for TTS. A first-line approach remains the management of stressors and comorbidities that can trigger the onset of TTS. Cancer, pulmonary, and neuropsychiatric diseases are the most frequent comorbidities in these patients and should be carefully evaluated during hospitalization and at follow-up. Psychotherapy, counseling, and stress reduction approaches are reasonable and viable options for patients that experienced TTS due to emotional triggers. Therefore, among patients with several comorbidities, especially those with a psychical one, a multidisciplinary long-term approach is needed [37][38].

More
© Text is available under the terms and conditions of the Creative Commons Attribution (CC BY) license; additional terms may apply. By using this site, you agree to the Terms and Conditions and Privacy Policy.
Upload a video for this entry
Information
Subjects: Others
Contributor MDPI registered users' name will be linked to their SciProfiles pages. To register with us, please refer to https://encyclopedia.pub/register :
Francesco Santoro
View Times: 124
Revisions: 2 times (View History)
Update Time: 14 Feb 2021
Table of Contents
1000/1000
Hot Most Recent