Submitted Successfully!
Thank you for your contribution! You can also upload a video entry related to this topic through the link below:
https://encyclopedia.pub/user/video_add?id=675
Check Note
2000/2000
3D Bioprinted Vascularized Tumour
Edit
Upload a video
This entry is adapted from 10.3390/ijms21082993

An in vitro screening system for anti-cancer drugs cannot exactly reflect the efficacy of drugs in vivo, without mimicking the tumour microenvironment (TME), which comprises cancer cells interacting with blood vessels and fibroblasts. Additionally, the tumour size should be controlled to obtain reliable and quantitative drug responses.

Herein, we report a bioprinting method for recapitulating the TME with a controllable spheroid size. The TME was constructed by printing a blood vessel layer consisting of fibroblasts and endothelial cells in , alginate, and fibrinogen, followed by seeding multicellular tumour spheroids (MCTSs) of glioblastoma cells (U87 MG) onto the blood vessel layer. Under MCTSs, sprouts of blood vessels were generated and surrounding MCTSs thereby increasing the spheroid size. The combined treatment involving the anti-cancer drug temozolomide (TMZ) and the angiogenic inhibitor sunitinib was more effective than TMZ alone for MCTSs surrounded by blood vessels, which indicates the feasibility of the TME for in vitro testing of drug efficacy. These results suggest that the bioprinted vascularized tumour is highly useful for understanding tumour biology, as well as for in vitro drug testing.

In vivo tumours form a microenvironment called a tumour microenvironment (TME), where tumour cells interact with adjacent stromal cells such as endothelial cells and fibroblasts and an extracellular matrix (ECM) [1] . This interaction is closely related to cancer progression, metastasis, and drug resistance [2] . For example, tumour cells and fibroblasts secrete angiogenic factors, such as the vascular endothelial growth factor (VEGF), leading to angiogenesis, which causes peripheral endothelial cells to form new blood vessels [3][4]. In turn, new blood vessels supply tumour cells with oxygen and nutrients, which are essential for tumour progression and metastasis [5] . In addition to VEGF, fibroblasts release various inflammatory cytokines such as interleukin 6 (IL-6) and transforming growth factor β1 (TGF-β1), to induce epithelial-mesenchymal transition (EMT) by increasing the expression of N-cadherin and vimentin in tumours [6][7]. Overexpression of these proteins is associated with a poor clinical outcome in cancer patients [8]. Thus, there is an urgent need to reconstitute the TME in vitro to better understand the biological properties of tumours and accurately predict their drug responses in vivo.

Several types of cancer cells can form spheroids called multicellular tumour spheroids (MCTSs) through self-aggregation [9]. MCTSs are commonly used to mimic the TME because of their similarity to tumours in vivo. For example, MCTSs larger than 200 μm are used to mimic cancer stem cell (CSC) niche due to a hypoxic environment in their core, where the stemness of CSCs is maintained [9][10][11][12] . To accurately observe quantitative drug responses, the size of the MCTSs should be controlled in a narrow range. Various methods have been developed to achieve this goal, including concave microwells [13][14]. However, most of these MCTSs lack endothelial and stromal cells, which play an important role in aggressive behaviours of tumour cells, such as angiogenesis and invasion [15]. Recently, microfluidic devices have been developed to recapitulate TME with perfusable vascular networks that exhibit angiogenesis [16][17][18][19]. However, because microfluidic devices are difficult to mass-produce, and their liquid handling for cell culture and drug testing in the devices is relatively complicated compared to those in microwell plates, their use in high-throughput screening (HTS) of anticancer drug efficacy is limited.

Bioprinting is a method for constructing complex three-dimensional (3D) biological structures via layer-by-layer printing of a bioink that comprises an ECM and cells, according to a computer-aided design [20]. Recently, several efforts have been made to reconstitute the TME of various cancers by 3D bioprinting technologies [21], including cervical cancer [22] and triple-negative breast cancer with fibroblasts [23]. Most recently, Langer et al.  [24] bioprinted a heterotypic TME that consisted of patient-derived cancer cells, fibroblasts, and endothelial cells, closely mimicking the TME in vivo. The TME is highly useful for studying the effect of stromal cells on the response of TME to drugs. However, TMEs vary in size and may not be suitable for obtaining quantitative results regarding drug efficacy.

Herein, we report a bioprinting method for constructing a vascularized TME with a controllable size to accurately determine the responses of cancer to drugs (Figure 1). The blood vessel layer was constructed by culturing bioprinted human vascular endothelial cells (HUVECs) and lung fibroblasts (LFs) in gelatine/alginate/fibrinogen (GAF) hydrogel, until it formed blood vessels with lumens. Then, MCTSs were seeded into the blood vessel layer and incubated until the endothelial cells in the blood vessel layer migrated into the MCTSs and exhibited angiogenesis while some cancer cells invaded the blood vessel layer. The biological relevance of the biofabricated TME was verified by investigating the expression of blood vessel marker CD 31, as well as the expression of vimentin and N-cadherin. The feasibility of its application for testing of drug efficacy was demonstrated by observing the differential effects of anti-cancer drugs such as temozolomide (TMZ) and sunitinib (SU) on MCTSs with and without the blood vessel layer. Since vascularized tumour can form in microwell plates using our bioprinting method, it can be used for HTS of anti-cancer drugs efficacy.

The ability of bioprinted hydrogel layers containing HUVECs and LFs to form blood vessels was determined by staining with DAPI for the nucleus, the anti-CD31 antibody for a blood vessel, and phalloidin for actin. On day four, the actin staining revealed capillary networks (Figure 2A) with a low expression of CD31, which is a protein expressed in endothelial intercellular junctions when endothelial cells form capillary tubes. The images showed that the capillary networks  were not yet fully developed. However, on day seven, the actin staining revealed well-developed capillary networks with a high expression of CD31 (Figure 2A). This was confirmed by measuring the area and thickness of blood vessel in the layer, indicating that the blood vessels on day seven were thicker and larger than those on day four (Figures 2B and C). When the GAF hydrogel encapsulating only HUVECs was printed, microvessels were not observed until day seven, indicating that LFs are required for HUVECs to form vascularized tissues. 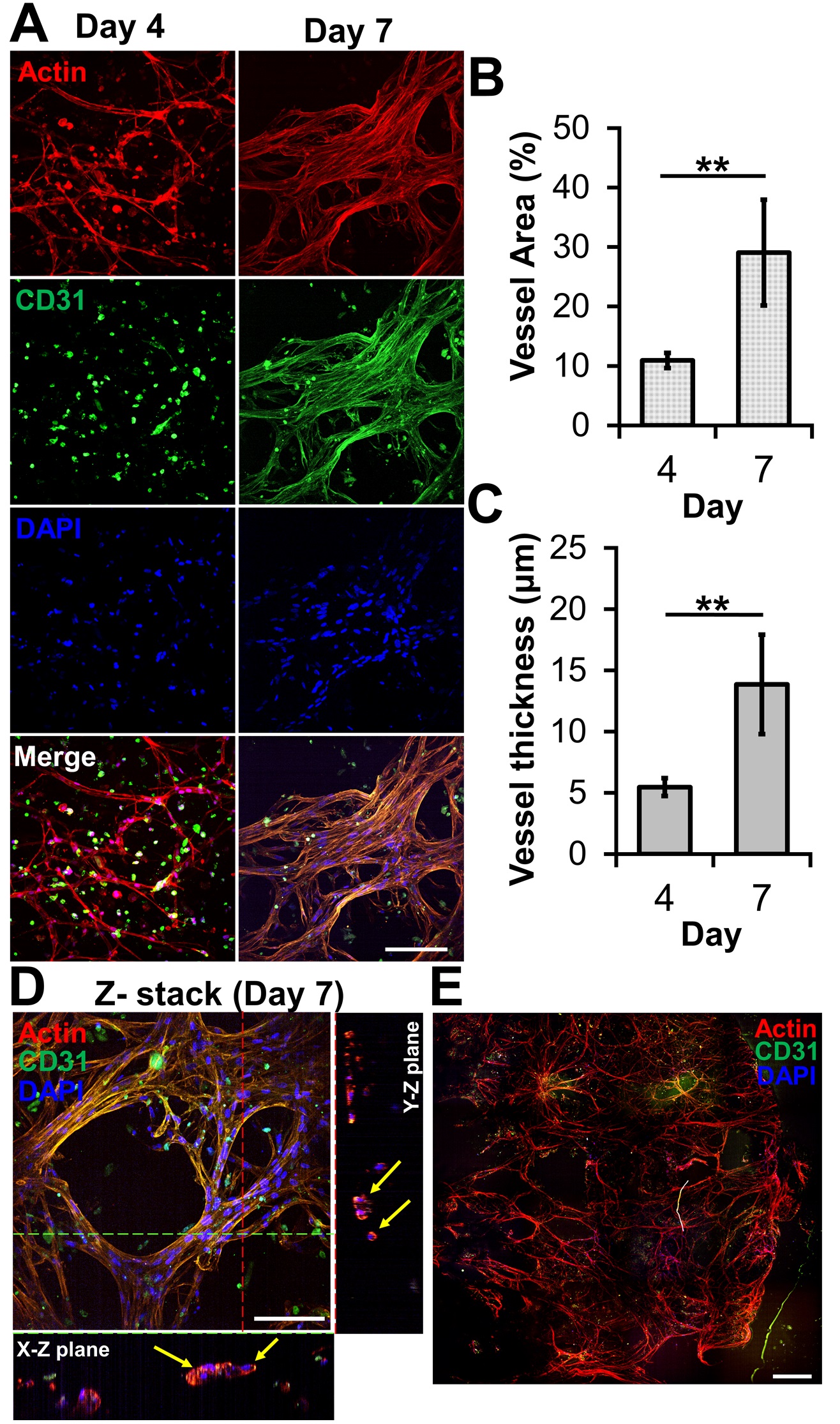 3. Effects of Vascularized Tissue on Growth, Angiogenesis, and EMT of MCTSs

Compared with the MCTSs on the 3D construct without vascularized tissues (Figure 3A), those on the 3D construct with vascularized tissues exhibited more evident actin protrusions (Figure 3B) indicating that the migratory activity of cancer cells increased [25]. The 3D images indicated that neovascularized structures infiltrated into MCTSs from the vascularized tissues (Figs. 3Bi and 3Bii). Although there was no significant difference in height (Figure 3D) or aspect ratio (Figure 3E) between the two groups, the latter was about 3.8 times larger than that without the former (Figure 3F). These results indicate that the latter grew faster in the X and Y directions than the former. Taken together, blood vessels and fibroblasts in TME play important roles in the proliferation, angiogenesis, and migration of tumours [25][26].

Interestingly, the neovascularized structure seemed to be mostly disconnected as shown in Figure 3B. A similar observation was previously reported [26]. The aggressive growth of malignant cell population and their overexpression of pro-angiogenic factors can lead to the development of disorganized blood vessel networks. In disconnected vascular networks, oxygen supply is limited lead to induced micro-regional hypoxia, which is one of the key features in TME.

4. Effects of TMZ and SU on Vascularized MCTSs

To demonstrate the feasibility of the MCTSs biofabricated on the vascularized tissues for drug testing, the MCTSs were treated with the traditional anti-cancer drug TMZ, the blood vessel inhibitor SU, or with TMZ and SU together. On day zero, vascularized MCTSs were treated with TMZ and SU separately or together for three days. Actin/DAPI staining confirmed the size of the U87 MCTSs (Figure 4A). The size of MCTS was significantly reduced for the SU- and TMZ-treated samples compared with the untreated sample (Figure 4B). Additionally, there was a significant difference in size between the MCTSs treated with the different drugs. Compared with the treatments involving only TMZ or SU, those involving both TMZ and SU together further reduced the tumour size. These results are similar to the results of combination therapy involving TMZ and SU with U87 cells inserted into mice. A synergistic effect of TMZ and SU was observed when they were applied together, compared with the case where only TMZ was applied [29]. Therefore, the results observed in this microenvironmental tissue are analogous to the in vivo results. Furthermore, because MCTSs with a uniform size were cultured at the beginning, the drug-screening results can be predicted based only on the size [30][31]. A size reduction of the MCTSs was observed in the isolinderalactone-treated samples as well (Figure S4). Isolinderalactone is an extract from Lindera aggregata, which is a traditional Chinese herbal medicine [32]. The result suggests that the bioprinted blood vessel layer is suitable for interaction with multiple MCTSs (approximately 4-7) and can be widely used for testing various anti-cancer drugs. 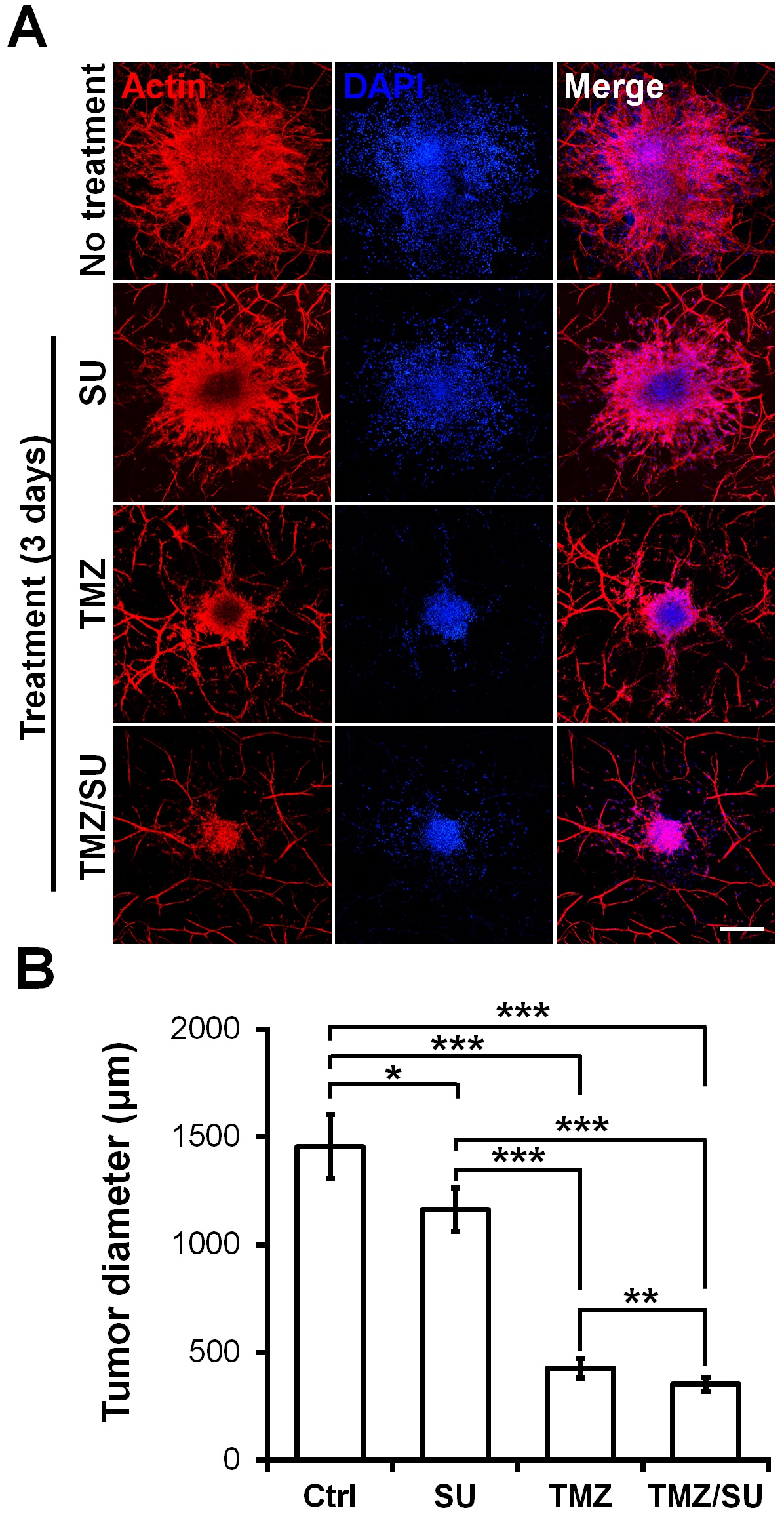 More
© Text is available under the terms and conditions of the Creative Commons Attribution (CC BY) license; additional terms may apply. By using this site, you agree to the Terms and Conditions and Privacy Policy.
Upload a video for this entry
Information
Subjects: Biotechnology & Applied Microbiology
Contributor MDPI registered users' name will be linked to their SciProfiles pages. To register with us, please refer to https://encyclopedia.pub/register :
Sungsu Park
View Times: 638
Revisions: 3 times (View History)
Update Time: 29 Oct 2020
Table of Contents
1000/1000
Hot Most Recent