+1 point
Thank you for your contribution! You can also upload a video entry related to this topic through the link below: https://encyclopedia.pub/user/video_add?id=37887
Check Note
2000/2000
BMN673 Is a PARP Inhibitor

Talazoparib (BMN673) is a relatively new PARP inhibitor (PARPi) that exhibits superior efficacy in vitro compared to olaparib and other clinically relevant PARPi. BMN673, similar to most clinical PARPi, inhibits the catalytic activities of PARP-1 and PARP-2 and shows impressive anticancer potential as monotherapy in several pre-clinical and clinical studies. Tumor resistance to PARPi poses a significant challenge in the clinic and combining BMN673 with RT may offer a promising treatment modality.

Radiotherapy (RT) and chemotherapy are two main pillars of cancer treatment. As the primary treatment modality, RT contributes to about 40% of curative treatments for cancer [1][2]. Therapeutically exploiting DNA repair offers a potent means to target cancer cells [3][4]. PARP inhibitors (PARPi) are widely used chemotherapeutic agents in homologous recombination (HR) deficient tumors. The seminal finding of a synthetic lethal interaction between PARP-1 and HR defects [5][6] accelerated the development of highly specific, clinically relevant PARPi, including olaparib (AZD-2281), niraparib (MK-4827), veliparib (ABT888), rucaparib (AG-014699), and talazoparib (BMN673) [7][8][9]. Such clinical PARPi exclusively target PARP-1 and PARP-2 to execute their anti-cancer effects through a synthetically lethal interaction with HR defects. The idea of synthetic lethal interactions between the PARPi and HR defects has been exploited as an Achilles heel in the management of ovarian and breast cancers and has been extensively reviewed in the past [10][11][12][13][14][15][16][17].
The PARP family of proteins regulates several biochemical processes in a living cell by mediating a post-translational modification called poly- or mono-ADP-ribosylation (PARylation or MARylation). Where PARP-1, 2, 5a, and 5b are capable of modifying their targets through PARylation, the remaining PARP family members modify their targets through MARylation [18]. Among 17 reported members of the PARP family [19], only PARP-1, PARP-2, and PARP-3 were found to regulate DNA damage response and repair (Figure 1). However, the main target of PARPi is PARP-1, which regulates DSB repair through PARylation of various signaling proteins, including itself. PARP-1 is the critical protein involved in single-strand break repair (SSB) and alternative end joining (alt-EJ) [20]. Multiple studies extend the primary functions of PARP-1 in DNA repair and suggest a broader role for PARP-1 and PARylation in the complex network of multiple DNA repair mechanisms [21][22]. This has highlighted PARP-1 as a central molecule coordinating the overall cellular responses to genotoxic stress in general and DNA damage, in particular (DDR) [23].

2. BMN673 Is a Superior Radiosensitizer

A few pre-clinical studies have shown the potential of BMN673 in combination with RT on multiple cancer cell lines and xenografts. BMN673 was shown to inhibit the proliferation of glioblastoma stem cells after exposure to low or high linear energy transfer radiations [25]. In 2018, the researhcers were the first to report the strong radiosensitizing potential of BMN673 (50 nM) in a battery of cancer cell lines originating from Rhabdoid tumors, Sarcomas, lung carcinomas, osteosarcomas, and colon cancer [26]. Only a short drug treatment time (~1 h) prior to RT was sufficient to achieve robust radiosensitization. Under similar experimental conditions, olaparib (3 µM), AG14361 (0.4 µM), and PJ34 (5 µM) showed only moderate radiosensitization. A potent radiosensitizing effect of BMN673 (200 nM) but not veliparib (1600 nM) was also reported in small cell lung carcinoma (SCLC) cell lines and Xenografts [27]. The non-small cell lung carcinoma (NSCLS) cell line, H460, was strongly radiosensitized after treatment with 2 nM BMN673, which could be further enhanced by treating cells with 5-Azacytidine [28]. Colorectal cancer cells and xenografts (BRAF wild type and mutant) could also be strongly radiosensitized by BMN673 (125 nM), whereas olaparib (250nM) and rucaparib (250 nM) exerted only a moderate radiosensitizing effect [29]. Highly radio- and chemotherapy-resistant chondrosarcoma cells were also shown to be strongly radiosensitized by BMN673 (5 nM) irrespective of their IDH (isocitrate dehydrogenase) mutation status [30]. Hepatocellular carcinoma cells, HepG2 and PLC/PRF/5, were also robustly radiosensitized with BMN673 (50 nM), whereas veliparib (10 µM) was ineffective [31]. A battery of melanoma cell lines was also strongly radiosensitized by BMN673 (50 nM). In the follow-up study, niraparib could not reach similar levels of radiosensitization, even at a concentration of 2500 nM [32].
One of the prominent features of BMN673, evident in the above-mentioned studies, is that it can be used at low nanomolar concentrations to achieve strong radiosensitization. Such concentrations are achievable in the blood of treated patients also ensuring in vivo radiosensitization [33]. No other clinical PARPi showed such efficacy and similar pharmacological properties, as pointed out earlier in this section. Not surprisingly, therefore, in pre-clinical and clinical settings, BMN673 showed robust antitumor activities at relatively low concentrations. For instance, olaparib was administered at 50 mg/kg, whereas BMN673 was used at a much lower dose of 0.3 mg/kg in pre-clinical studies (8). Similar trends were also noted in the clinical setting (protocols: NCT02032823, NCT02184195, NCT01945775, NCT02326844) [34][35][36]. Importantly, BMN673 as a monotherapy showed a manageable tolerability profile in breast cancer patients who participated in EMBRACA and ABRAZO studies [37][38].
Another critical property of BMN673 is the flexible drug treatment time and administration schedule required to achieve strong radiosensitization, at least in certain cell systems. A one-hour treatment with BMN673 prior to RT exerted equally strong radiosensitization as continuous treatment during the course of incubation for colony formation, and that even administration several hours after IR radiosensitized cells with impressive efficacy [26]. This property, if proven general, will be very useful in the clinic, as it simplifies the effective combination of BMN673 treatment with radiation exposure in the hectic environment of a radiation therapy facility. Such administration-flexibility has not been reported for other radiosensitizers and requires in-depth analysis of its mechanistic underpinnings.
In addition, BMN673 specifically sensitized cancer cells to RT, whereas normal human cell lines were not sensitized [26], again a favorable parameter in the clinic, promising reduced normal tissue toxicity. The mechanistic underpinnings of this interesting observation require further in-depth investigations as well.

3. Speculations on the Mechanism of BMN673-Induced Radiosensitization

Retention of inhibited PARP on DNA lesions (the so-called PARP trapping) has been proposed as a key parameter of PAPRi-induced cytotoxicity underpinning the effects of monotherapy applications. PARPi-mediated inhibition of Parp1 auto-PARylation prevents its removal from DNA lesions and leads to replication fork collapse in S-phase cells, or to the suppression of other aspects of the DNA metabolism [39]. BMN63 has been reported as the most potent inducer of PARP-1 trapping, compared to other clinically relevant PARPi, and this property is often causally correlated to its increased cytotoxicity [39].
When analyzing the effects of PAPRi, it is important to address separately effects on cytotoxicity that is enhanced in HR deficient cells, and effects on radiosensitivity and DSB processing reviewed here, as they may be caused by different mechanisms. Thus, while it is possible that the enhanced trapping ability of BMN673 explains its toxicity in HR deficient cancers [8][11], it may not underpin, in its non-specific form, the notable radiosensitizing potential. It is relevant in this regard that the PARP trapping ability of clinical PARPi has been mostly demonstrated using DNA alkylating agents such as MMS that are likely to generate lesions strongly inhibiting DNA replication [27][39][40]. Similar forms of PARP1 trapping have not been reported for irradiated cells, and indeed the experiments failed to generate unequivocal evidence for trapping.
Can Parp1 trapping explain the above observed effects of BMN673 on DSB processing? The shift of DSB repair from c-NHEJ to HR and alt-EJ that requires extensive processing of DNA ends rules out general Parp1 trapping stopping all processing at the DSB end as a mechanism. Indeed, BMN673 mediated excessive resection and accretion of RPA70 and Rad51 after IR [26] is plausible only when DSB ends are not blocked by trapped PARP-1. Therefore, if Parp1 trapping underpins the above discussed DSB repair effects, it must be happening in a highly specific manner centering on c-NHEJ. The researchers hypothesize that after BMN673 treatment, Parp1 inhibits the binding of Ku to DNA ends. Indeed, there is evidence that Parp1 precedes Ku at the DSB end [41], and it is therefore possible that the engagement of Ku is changed by trapped Parp1. Existing evidence suggests that this effect is observed both at high as well as at low doses of IR. The researchers further hypothesize that the interaction of inhibited Parp1 is highly specific for Ku and that it leaves unchanged, or even facilitates all processes associated with DNA end resection.
It has been shown recently that p97 ATPase/segregase extracts BMN673-induced trapped PARP-1 from chromatin, a process that requires post-translational modification of PARP-1 by PIAS4-mediated SUMOylation and RNF4-mediated ubiquitination [42]. The chromatin remodeler ALC1 (amplified in liver cancer 1) could also remove inactive PARP1 through binding to readily PARylated chromatin prior to PARPi treatment. Moreover, ALC1 is implicated in the recruitment of Rad51, Ku70, RPA and MRE11 to DNA damage sites, thus acting upstream of DSB repair pathway choice after removing trapped PARP [43].
The above evidence in aggregate shows that BMN673 indeed traps Parp1 at the DSBs and provides clues on possible mechanisms to undo this trapping. It leaves however open the mechanism of how BMN673 specifically inhibits c-NHEJ and enhances in a directly compensating manner, resection-dependent DSB processing. The elucidation of the mechanisms underpinning these effects should be given high priority.
Figure 2 summarizes the postulated altered balance in DSB repair utilization after treatment of irradiated cells with BMN673, based on the assumption that it inhibits c-NHEJ. The color zones in the bars show the fraction of DSBs processed by each DSB repair pathway, except SSA that has not been sufficiently analyzed for BMN673 effects. It is drawn on the assumption that only very few DSBs remain unprocessed and that this fraction slightly increases with dose. It is also considering G2-phase cells to include effects on HR. 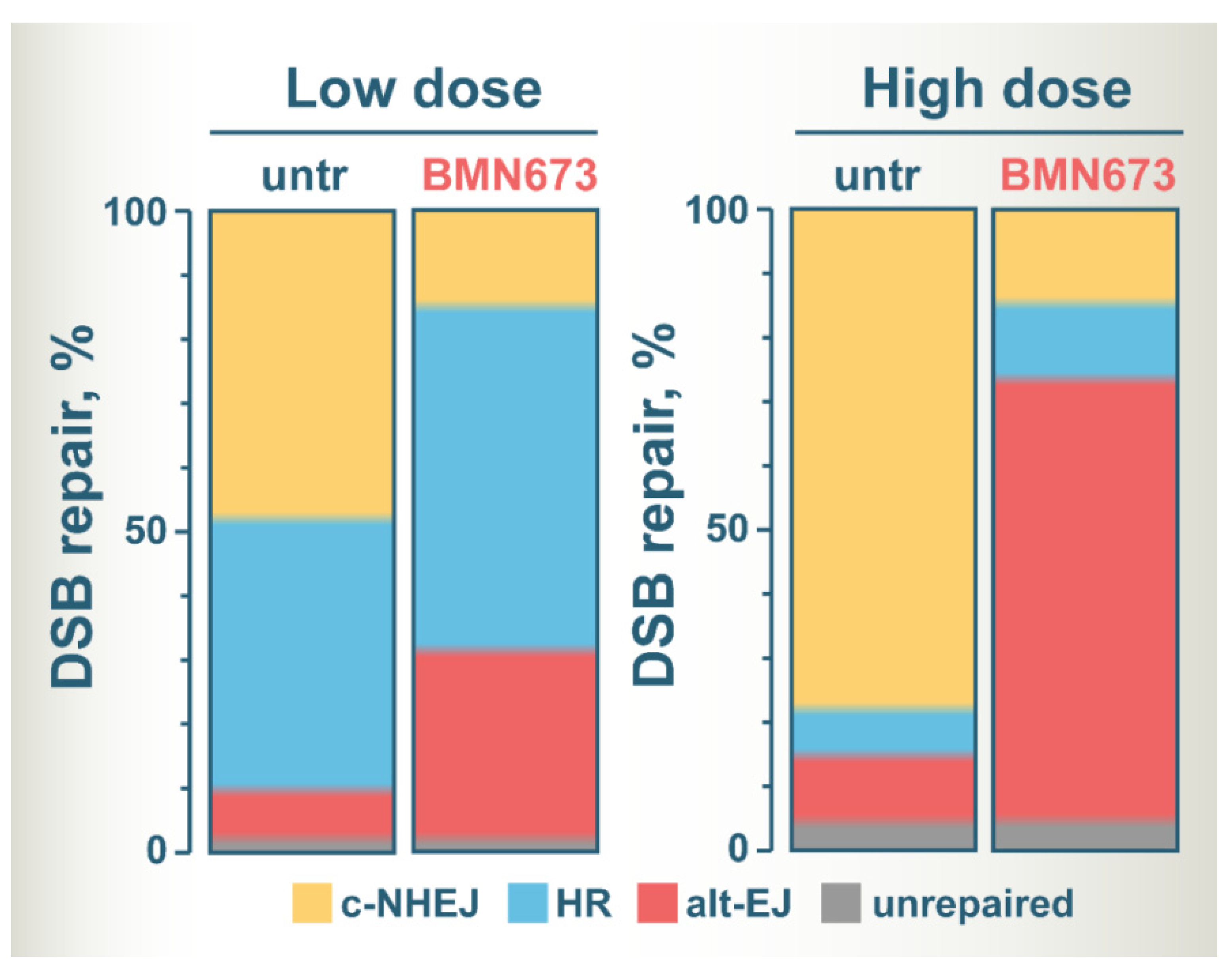 Figure 2. A model of altered DSB repair pathway balance at low and high IR doses in BMN673-treated cells. See text for details.
At low IR doses, c-NHEJ and HR repair similar fractions of DSBs, with alt-EJ having a small contribution [44][45][46]. BMN673 treatment at low IR doses inhibits c-NHEJ and shifts the balance towards HR and to alt-EJ that shows robust increases [26]. At high IR doses, HR is inherently suppressed and the majority of DSBs are processed by c-NHEJ, and to a much lesser extent by alt-EJ [44][46]. BMN673 treatment after exposure to high IR doses also inhibits c-NHEJ, but leaves now the majority of DSBs to be processed by alt-EJ [26].

More
© Text is available under the terms and conditions of the Creative Commons Attribution (CC BY) license; additional terms may apply. By using this site, you agree to the Terms and Conditions and Privacy Policy.
Upload a video for this entry
Information
Subjects: Oncology
Contributors MDPI registered users' name will be linked to their SciProfiles pages. To register with us, please refer to https://encyclopedia.pub/register :
Aashish Soni
,
Xixi Lin
,
Emil Mladenov
,
Veronika Mladenova
,
Martin Stuschke
,
George Iliakis
View Times: 65
Revisions: 3 times (View History)
Update Date: 05 Dec 2022
Table of Contents
1000/1000
Hot Most Recent