+1 point
Thank you for your contribution! You can also upload a video entry related to this topic through the link below: https://encyclopedia.pub/user/video_add?id=37133
Check Note
2000/2000
Wastewater Treatment Technologies

Freshwater is in limited supply, and the growing population further contributes to its scarcity. The effective treatment of wastewater is essential now more than ever, because waterborne infections significantly contribute to global deaths, and millions of people are deprived of safe drinking water. The wastewater treatment technologies include preliminary, primary, secondary, and tertiary treatments, which are effective in removing several contaminants.

The rapid growth of the world population and climate change, are two key factors that immensely affect the availability of freshwater. In total, 80% of diseases worldwide are directly or indirectly caused by a poor water quality supply, and 19% of global fatalities are attributable to infections caused by pathogenic microorganisms in water [1]. The developing world is mostly at risk; and this compounded by the fact, the cost of analysing the microbial and chemical content of water is high and relatively complex. In addition to having a negative impact on human life, contaminated water also negatively impacts wildlife and the environment [2][3]. Globally, the construction of water pipes connected to lodgings has increased in the last 20 years, but a large portion of the population still do not have access to clean drinking water, comprising approximately 780 million people [4]. In 2010, 690 million people had access to water which was only partially treated [5]. The conservation of water is a strategy used to reduce the amount of water usage, but other solutions are needed because conservation alone is insufficient due to the demands of the ever-growing population. Poor sanitation also puts pressure on the delivery of clean and safe water. Therefore, new innovative and cost-effective ways to treat wastewater are crucial [6]. Only 2.5–3% of the earth’s water is freshwater, and of this 3%, about 70% exists in the form of ice, and the remaining 30% is groundwater, which can be difficult to access [7]. By 2050, the global population is predicted to reach 9 billion, and by 2075, 75% of the global population will have an inadequate availability of freshwater [8]. This, again substantiates the importance of novel and scalable wastewater treatment methodologies.
The basic wastewater treatment process usually involves three main steps: primary, secondary and tertiary treatment. These steps are dependent on the size and location of the treatment plant but also, more importantly, the type of raw water that needs to be treated. One of the specific treatment methods adopted in these three treatment steps is separation by sedimentation, as induced by gravity. Boiling, which kills bacteria is also common. However, recalcitrant minerals/metals may not be effectively removed using these methods. Ultraviolet (UV) light is also effective for microbial inactivation, but filtration is usually a pre-requisite step, and few residuals are removed during this treatment. The use of chemicals is another commonly adopted method of purifying water. Coagulants, for example, enable the agglomeration of suspended materials, which can subsequently be separated by filtration. However, few dissolved materials are removed using this method. Other chemicals such as chlorine, bromine, iodine and hydrogen peroxide can be used to kill microbes, but some of these chemicals are immensely toxic and may result in more harm (carcinogenic) to humans and the environment. Reverse osmosis is a well-utilised method for wastewater treatment; however, chemical and bacterial contaminants are not effectively captured by this technology. Often, a combination of these methods is employed to achieve an improved treatment efficiency. It is evident that there are many limitations to these conventional methods. Hence, there is an increased need for new methods, such as nanotechnology, which is capable of addressing these limitations, especially when the contaminants are of a micro- or nanoscale [9].
Nanotechnology can be used to overcome serious environmental problems, such as solid waste management and air and water pollution [10]. The most difficult contaminants to eliminate in wastewater are those in the nanoscale range (1–100 nm), hence the corresponding suitability of nano-based methodologies. Nanotechnologies are extremely advantageous for water remediation not only because of the dimensional domain, but also because of the excellent physicochemical properties of nanomaterials. Nanotechnology research and development, both in water purification and in other applications (energy storage, medicine, clothing and food preservation), are developing rapidly worldwide. In the US, 6 billion dollars are invested in nanotechnology research and development annually [1]. Although nanoparticles can be sourced from natural sources, they can also be synthesized. There is immense research interest in the field of novel nanomaterial synthesis based on materials with desirable properties, particularly for improving the quality of the effluent discharge from various industries. Nanoparticles vary in size, solubility, shape, surface area and charge, and all of these determine their respective chemical, biological and physical characteristics [2]. Nanofiltration (NF), reverse osmosis (RO), microfiltration (MF) and ultrafiltration (UF) are all nano-based methods used for treating wastewater. Of these methods, nanofiltration is predominantly applied, as it is capable of removing salts, minerals, pathogens, anions, cations and total dissolved solids (TDS). The removal of pathogens such as viruses, protozoa and bacteria is another capability of this technology that is particularly important for mitigating waterborne infections in humans and animals [8].

The removal of soils, pathogens, organic materials and toxic chemicals and the necessity to comply with the guidelines and legislation for the safe discharge of wastewater constitute some of the main reasons for wastewater treatment. The type and mixture of waste that ends up in a wastewater treatment plant (WWTP) depend on the source(s). Correspondingly, the technology adopted for the treatment depends on the type of waste. The waste can be municipal waste (from homes, schools, hospitals, restaurants and shops), industrial waste (from factories and pharmaceutical companies), or inflow and infiltration (from sewers and manholes and groundwater and stormwater). The first step in attaining an adequate treatment is the characterisation of the wastewater to identify its specific constituents. Parameters such as the pH, biological oxygen demand (BOD), chemical oxygen demand (COD), alkalinity, hardness, mineral composition, anionic composition and non-ionic composition are important to obtain. Thereafter, the correct technologies can be implemented for treatment. The treatment may be physical, chemical or biological, but a combination of all three is usually applied [11]. The current WWT steps are further explained hereafter.

The preliminary treatment can be considered the most important treatment step, as it affects all the other treatment steps. This step removes larger solid material which, if not eliminated, may cause pipe blockages and impede the rest of the treatment process. The incoming wastewater is subjected to metal screens to filter out large items such as plastics, paper, etc. Solid particles, which are smaller and penetrate the screens, are removed by sedimentation. Some of these solids include stones, sand and grit. Collected solids can then be disposed of properly. There are solids which cannot be removed by filtering or settling, such as fats, oils and grease (FOG). These are usually removed by a process known as floatation. Air bubbles are introduced into the water tank, which causes the FOG to float to the surface of the tank so that it can be mechanically skimmed from the tank [11][12].

Primary treatment removes a significant number of suspended solids (Figure 1). This step is carried out in clarifiers, also known as settling tanks. The primary sewage sludge settles at the bottom of the tank and is then removed from the tank by mechanical means. The primary sewage sludge is transported to a different part of the plant, where it is also treated [11]. Primary treatment may also involve the use of coagulants, resulting in a better settlement of suspended solids in the water. The use of coagulants can be expensive, and the corrosive and hazardous properties of some coagulants make them less desirable (e.g., ferric chloride). Coagulants also need to be recovered or reused. This recovery process may increase the cost of the treatment process [13]. Although coagulants are effective in further removing solids, they do not remove endocrine-disrupting compounds (EDCs), which have adverse effects on aquatic and human health. The application of nanotechnology can also target these harmful compounds [14]. Preliminary and primary treatments are very important steps in the WWT process, but they do not remove pathogens, dissolved solids and pharmaceuticals. Thus, further treatment is needed. 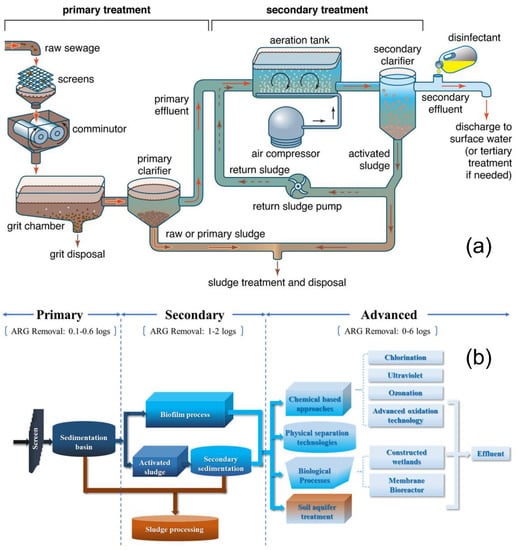 Figure 1. (a) Wastewater treatment steps [15] (By courtesy of Encyclopædia Britannica, Inc., copyright 2015; used with permission), showing (b) the removal efficacy of antibiotic resistance genes (ARG) (emerging contaminants) in this step [16].

By utilising biological treatment, this step targets dissolved solids which cannot be removed by filtration or sedimentation. One example of biological treatment is the use of sequencing batch reactors (SBRs), which involves two or more tanks in series [17]. The primary wastewater is released into the first tank, after which oxygen is supplied (aeration) to the tank by blowers. Oxygen is required by the microorganisms to enable them metabolise and decompose the present organic material. The aeration stage may last for up to 105 min [18]. Subsequent to this phase is the settling step, during which the biomass settles in the tank. The clean water can be separated with the aid of a decant arm. Although this step removes a large portion of organic and inorganic pollutants, pollutants in the nanoscale range remain. Secondary treatment are usually incapable of effectively eliminating contaminants of emerging concern (CEC), such as medicines and domestic cleaning products, which are harmful to the environment when released as effluents [19]. However, Pei et al. [16] highlighted that antibiotic resistance genes (ARGs), a class of emerging contaminants, may be more effectively removed during secondary treatment, as illustrated in Figure 1b.

The final stage is the tertiary treatment, and this differs depending on the WWTP. After the treatment steps mentioned above, there are still pollutants and residual toxins in the effluent which must be removed [20][21]. This step removes nutrients, pathogens and odours [22]. In this way, the quality of the discharged effluent is improved and meets stricter standards that are not obtainable through secondary treatment. Most tertiary treatment methods involve the application of physicochemical techniques, such as activated carbon adsorption, additional disinfection and even reverse osmosis [23][24][25]. It should be mentioned that the advanced oxidation technology, such as photocatalysis and photoelectrocatalysis, outlined as part of the tertiary treatment in Figure 1, are relevant nanotechnological approaches for water remediation due to the use of semiconductor catalysts in the form of nanomaterials.

Despite the successes of the outlined methods, their large-scale applications are often plagued by a myriad of challenges. For example, chlorination, which is used to remove pathogens, leaves an undesired taste and smell in the water, and a further dechlorination step is often required to prevent this. An alternative to chlorine is ozonation, which is also effective in inactivating pathogens [26][27]. However, this method can be expensive due to the energy costs. Other methods of microorganism removal are ion exchange and ultraviolet (UV) photocatalysis, but these are not very convenient for the complete removal of pathogens. Nanofiltration (NF), reverse osmosis (RO), microfiltration (MF) and ultrafiltration (UF) are highly effective in removing micropollutants but may induce equipment fouling. There is a need for newer technologies that can adequately eliminate newly emerging contaminants. Nanotechnology has been deemed an effective technology in this regard [14].

More
© Text is available under the terms and conditions of the Creative Commons Attribution (CC BY) license; additional terms may apply. By using this site, you agree to the Terms and Conditions and Privacy Policy.
Upload a video for this entry
Information
Subjects: Engineering, Environmental
Contributors MDPI registered users' name will be linked to their SciProfiles pages. To register with us, please refer to https://encyclopedia.pub/register :
Emmanuel I. Epelle
,
Patrick U. Okoye
,
Siobhan Roddy
,
Burcu Gunes
,
Jude A. Okolie
View Times: 140
Revisions: 2 times (View History)
Update Date: 30 Nov 2022
Table of Contents
1000/1000
Hot Most Recent