+1 point
Thank you for your contribution! You can also upload a video entry related to this topic through the link below: https://encyclopedia.pub/user/video_add?id=37015
Check Note
2000/2000
Katherine Freese 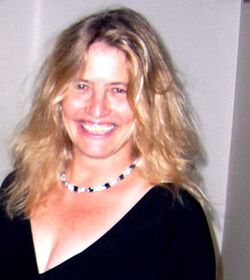 Katherine Freese is a theoretical astrophysicist and George Eugene Uhlenbeck Collegiate Professor of Physics at the University of Michigan in Ann Arbor. Starting in September 2014, she assumed the position of Director of Nordita, the Nordic Institute for Theoretical Physics, in Stockholm, and holds a position as Visiting Professor of Physics at Stockholm University. She is known for her work in theoretical cosmology at the interface of particle physics and astrophysics.

Freese has contributed to early research on dark matter and dark energy. She was one of the first to propose ways to discover dark matter.[2] Her idea of indirect detection in the Earth is being pursued by the IceCube Neutrino Observatory experiment,[3] and the "wind" of dark matter particles felt as the Earth orbits the Milky Way (work with David Spergel) is being searched for in worldwide experiments. Her work decisively ruled out MACHO (Massive compact halo object) dark matter in favor of WIMPs (weakly interacting massive particles).[4] She has proposed a model known as "Cardassian expansion," in which dark energy is replaced with a modification of Einstein's equations.[5] Recently she proposed a new theoretical type of star, called a dark star, powered by dark matter annihilation rather than fusion [6]

Freese has also worked on the beginnings of the universe, including the search for a successful inflationary theory to kick off the Big Bang. Her natural inflation model [7] is a theoretically well-motivated variant of inflation; it uses axionic-type particles to provide the required flat potentials to drive the expansion. In 2013, observations made by the European Space Agency's Planck Satellite show that the framework of natural inflation matches the data.[8] She has studied the Ultimate fate of the universe, including the fate of life in the universe.[9]"

Freese has served on the Board of the Kavli Institute for Theoretical Physics in Santa Barbara and the Board of the Aspen Center for Physics. From 2008-2012 she was a Councilor and Member of the Executive Committee of the American Physical Society, and from 2005-2008 she was a member of the Astronomy and Astrophysics Advisory Committee (AAAC). Currently she serves on the Board of the Oskar Klein Centre for Cosmoparticle Physics in Stockholm. In 2009 Freese was elected Fellow of the American Physical Society. She received a Simons Foundation Fellowship in Theoretical Physics. In September 2012 Freese was awarded an Honorary Doctorate (Honoris Causa) from the University of Stockholm.

Students who obtained their PhD's from Freese include Janna Levin, author and professor in astronomy and physics at Barnard College and Jay Jubas, Senior Partner at McKinsey & Company, Telecoms, Media & Technology.

Freese was born in Freiburg, Germany, to Ernst Freese and Elisabeth Bautz Freese. At age nine months she emigrated to the United States. Her cousin Anja Freese, a German actor, currently resides in Los Angeles.

In addition to contributions in academia and research, Dr. Freese has written a comprehensive review for the general educated public on dark matter and energy as they relate to recent research in cosmology and particle physics, titled The Cosmic Cocktail: Three Parts Dark Matter (Science Essentials, 2014, ISBN:0691153353). The book is partly autobiographical. Katherine covers the contributions of Fritz Zwicky, for example, who was recently profiled as "the most important astronomer you've never heard of" and "the father of dark matter" on Cosmos: A Spacetime Odyssey.