+1 point
Thank you for your contribution! You can also upload a video entry related to this topic through the link below: https://encyclopedia.pub/user/video_add?id=36977
Check Note
2000/2000
Róbert Bárány

Edit
Upload a video
The content is sourced from: https://handwiki.org/wiki/Biography:R%C3%B3bert_B%C3%A1r%C3%A1ny
vestibular physiology and pathology physiology 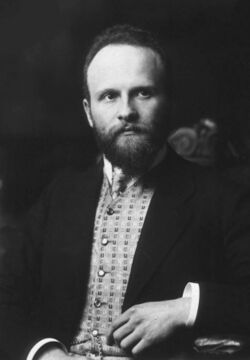 Robert Bárány (Hungarian: Bárány Róbert; Hungarian pronunciation: [ˈroːbɛrt ˈbaːraːɲ]; 22 April 1876 – 8 April 1936) was an ethnic Hungarian otologist from Austria.[1] He received the 1914 Nobel Prize in Physiology or Medicine for his work on the physiology and pathology of the vestibular apparatus.[2]

Bárány was born in Vienna, Austria-Hungary. He was the eldest of six children of Maria (née Hock), the daughter of a scientist, and Ignác Bárány, born 1842 in Várpalota, who was a bank official and estate manager.[3] His father was a Hungarian Jew.

He attended medical school at Vienna University, graduating in 1900. As a doctor in Vienna, Bárány was syringing fluid into the external auditory canal of a patient to relieve the patient's dizzy spells. The patient experienced vertigo and nystagmus (involuntary eye movement) when Bárány injected fluid that was too cold. In response, Bárány warmed the fluid for the patient and the patient experienced nystagmus in the opposite direction. Bárány theorized that the endolymph was sinking when it was cool and rising when it was warm, and thus the direction of flow of the endolymph was providing the proprioceptive signal to the vestibular organ. He followed up on this observation with a series of experiments on what he called the caloric reaction. The research resulting from his observations made surgical treatment of vestibular organ diseases possible. Bárány also investigated other aspects of equilibrium control, including the function of the cerebellum. Benign paroxysmal positional vertigo is said to have been first described in medical texts by Bárány.[4]

He served in the Austro-Hungarian Army during World War I as a civilian surgeon and was captured by the Imperial Russian Army. When his Nobel Prize was awarded in 1914, Bárány was in a Russian prisoner of war camp. In response to his receiving the prize, Sigmund Freud wrote in 1915: "The granting of the Nobel Prize to Bárány, whom I refused to take as a pupil some years ago because he seemed to be too abnormal, has aroused sad thoughts about how helpless an individual is about gaining the respect of the crowd."[5] Bárány was released from the prisoner of war camp in 1916 following diplomatic negotiations with Russia conducted by Prince Carl of Sweden and the Red Cross. He was then able to attend the Nobel Prize awards ceremony in 1916, where he was awarded his prize. Virtually as soon as he was awarded the Nobel Prize, in January 1917, he, with the automatic qualification for making such proposals that comes with being a Prize Winner, proposed to the Nobel Committee in Physiology or Medicine that Sigmund Freud should be awarded the Prize.[6] From 1917 until his death he was professor at Uppsala University Faculty of Medicine.

Bárány died shortly before his sixtieth birthday in Uppsala. He was the father of physician and Swedish Royal Academy of Sciences member Ernst Bárány (1910–1991) and grandfather of physicist Anders Bárány, former secretary of the Nobel Committee for Physics.