+1 point
Thank you for your contribution! You can also upload a video entry related to this topic through the link below: https://encyclopedia.pub/user/video_add?id=36212
Check Note
2000/2000
Arlie Petters 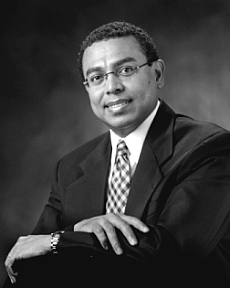 Arlie Oswald Petters, MBE (born February 8, 1964) is a Belizean-American mathematical physicist, who is the Benjamin Powell Professor of Mathematics and a Professor Physics and Economics at Duke University.[1] Petters is a founder of mathematical astronomy, focusing on problems connected to the interplay of gravity and light and employing tools from astrophysics, cosmology, general relativity, high energy physics, differential geometry, singularities, and probability theory.[2] His monograph "Singularity Theory and Gravitational Lensing" is the first to develop a mathematical theory of gravitational lensing. Petters is also the Dean of Academic Affairs for Trinity College of Arts and Sciences and Associate Vice Provost for Undergraduate Education at Duke University.[3]

Petters was raised by his grandparents in the rural community of Stann Creek Town, British Honduras (now Dangriga, Belize). His mother immigrated to Brooklyn, New York, and married a U.S. citizen, with Arlie joining them when he was 14 years old.[4]

Petters is renowned for his pioneering work in the mathematical theory of gravitational lensing.

Following his 1991–2001 body of mathematical lensing work, Petters turned to more astrophysical lensing issues from 2002–2005. In collaboration with astronomers, he applied some of the mathematical theory in [AP13] to help develop a practical diagnostic test for the presence of dark substructures in galaxies lensing quasars; [12] [13] classify the local astrometric (centroid) and photometric curves of an extended source when it crosses fold and cusp caustics due to generic lenses; [14] [15] predict the quantitative astrometric curve's shape produced by Galactic binary lenses. [14] [15] The classified local properties of the astrometric curves revealed a characteristic S-shape for fold crossings, parabolic and swallowtail features for cusp crossings, and a jump discontinuity for crossings over the fold arcs merging into a cusp. A formula for the size of the jump was also found.

During 2005–2007, Petters collaborated with astronomers and physicists to explore gravitational lensing in directions beyond its traditional confines in astronomy. In a series of three mathematical physics papers (2005–2006) with the astronomer Keeton, he utilized higher-order gravitational lensing effects by compact bodies to test different theories of gravity with Einstein's general theory of relativity among them. The first two papers computed beyond the standard weak-deflection limit the first- and second-order corrections to the image positions, magnifications, and time delays due to lensing in general relativity and alternative gravitational theories describable within the PPN formalism, [16] and even determined lensing invariants for the PPN family of models. [17] Their findings were applied to the Galactic black hole, binary pulsars, and gravitational microlensing scenarios to make testable predictions about lensed images and their time delays. [16] The third paper took on the difficult issue of how to test hyperspace models like braneworld gravity that postulate an extra dimension to physical space. The paper developed a semi-classical wave theory of braneworld black hole lensing and used that theory along with braneworld cosmology to predict a testable signature of microscopic braneworld black holes on gamma-ray light. [18] [19] Additionally, in a 2007 paper, Petters and Werner found a system of equations that can be applied to test the Cosmic Censorship Hypothesis observationally using the realistic case of lensing by a Kerr black hole. [20] [21]

Petters's previous work (1991–2007) dealt with non-random gravitational lensing. His recent research program (2008–present) has been to develop a mathematical theory of random (stochastic) gravitational lensing. In two papers, he, Rider, and Teguia took first steps in creating a mathematical theory of stochastic gravitational microlensing. They characterized to several asymptotic orders the probability densities of random time delay functions, lensing maps, and shear maps in stochastic microlensing and determined a Kac-Rice type formula for the global expected number of images due to a general stochastic lens system. [22] [23] The work forms a concrete framework from which extensions to more general random maps can be made. In two additional papers, he and Aazami found geometric universal magnification invariants of higher-order caustics occurring in lensing and caustics produced by generic general maps up to codimension five. [24] [25] [26] The invariants hold with a probability of 1 for random lenses and thereby form important consistency checks for research on random image magnifications of sources near stable caustics.

Petters has given back significantly to the African-American community, which has included him serving as Director of the Reginaldo Howard Memorial Scholarship program at Duke University. [28] He has also been active in the African-American community particularly through his mentoring, recruiting, and lecturing. [29] [30] He has received several community service awards for his social outreach. [31] [32] Petters is also the first tenured African-American professor in Mathematics at Duke University. [31] He is very involved in the Belizean community and founded the Petters Research Institute [33] in 2005 to help train Belizean young people in STEM fields and foster STEM entrepreneurship.[34] [35] He has also written five books, three of which were science and mathematics problem-solving books for Belizean students. [36] [37] Some of his entrepreneurial work was conducted while he was a Professor of Business Administration at Duke’s Fuqua School of Business (2008–2017).[3] Petters also served the Government of Belize as Chairman of the Council of Science Advisers to the Prime Minister of Belize (2010–2013).[3][38]

Petters is the recipient of numerous awards and honors, [39] which includes an Alfred P. Sloan Research Fellowship in Mathematics (1998), [40] a CAREER award from the National Science Foundation (1998), [41] and being the first winner of a Blackwell-Tapia Prize (2002). [42] He was selected in 2006 by the National Academy of Sciences to be part of a permanent Portrait Collection of Outstanding African-Americans in Science, Engineering, and Medicine. [43] In 2008 Petters was also included among the Human Relations Associates' list of "The Twenty-Five Greatest Scientists of African Ancestry," which went back as early as the 18th century. [44] He received an honorary Doctor of Science from his alma mater Hunter College in 2008. [45] Petters was named by the Queen of England in 2008 to membership in the Most Excellent Order of the British Empire. [46] In recognition of his scientific accomplishments and service to society, Petters's birthplace—Dangriga, Belize—honored him in 2009 with the Dr. Arlie Petters Street. [47] He became in 2011 the first Belizean to receive the Caribbean American Heritage Award for Excellence in Science and Technology. [48] In 2012 he became a fellow of the American Mathematical Society[49] and the first Belizean American to be Grand Marshal of the Central American Day Parade in L.A., where he received honors from the mayor of L.A. and COFECA.[3][50]