+1 point
Thank you for your contribution! You can also upload a video entry related to this topic through the link below: https://encyclopedia.pub/user/video_add?id=35392
Check Note
2000/2000
Bricks and Clicks

Edit
Upload a video
The content is sourced from: https://handwiki.org/wiki/Bricks_and_clicks

Bricks and clicks (aka clicks and bricks; click and mortar; bricks, clicks and flips; Womble Store Method (WSM); or WAMBAM ('Web Application Meets Bricks and Mortar') is a jargon term for a business model by which a company integrates both offline (bricks) and online (clicks) presences, sometimes with the third extra flips (physical catalogs). Additionally, many will also offer telephone ordering and mobile phone apps, or at least provide telephone sales support. The advent of mobile web has made businesses operating bricks and clicks businesses especially popular, because it means customers can do tasks like shopping when they have spare time and do not have to be at a computer. Many of these users prefer to use mobile shopping sites. A popular example of the bricks and clicks model is when a chain of stores allows the customer to order products either online or physically in one of their stores, also allowing them to either pick-up their order directly at a local branch of the store or get it delivered to their home. There are many alternative combinations of this model. The success of the model in many sectors has lessened the credibility of some analysts who argued that the Internet would render traditional retailers obsolete through disintermediation. 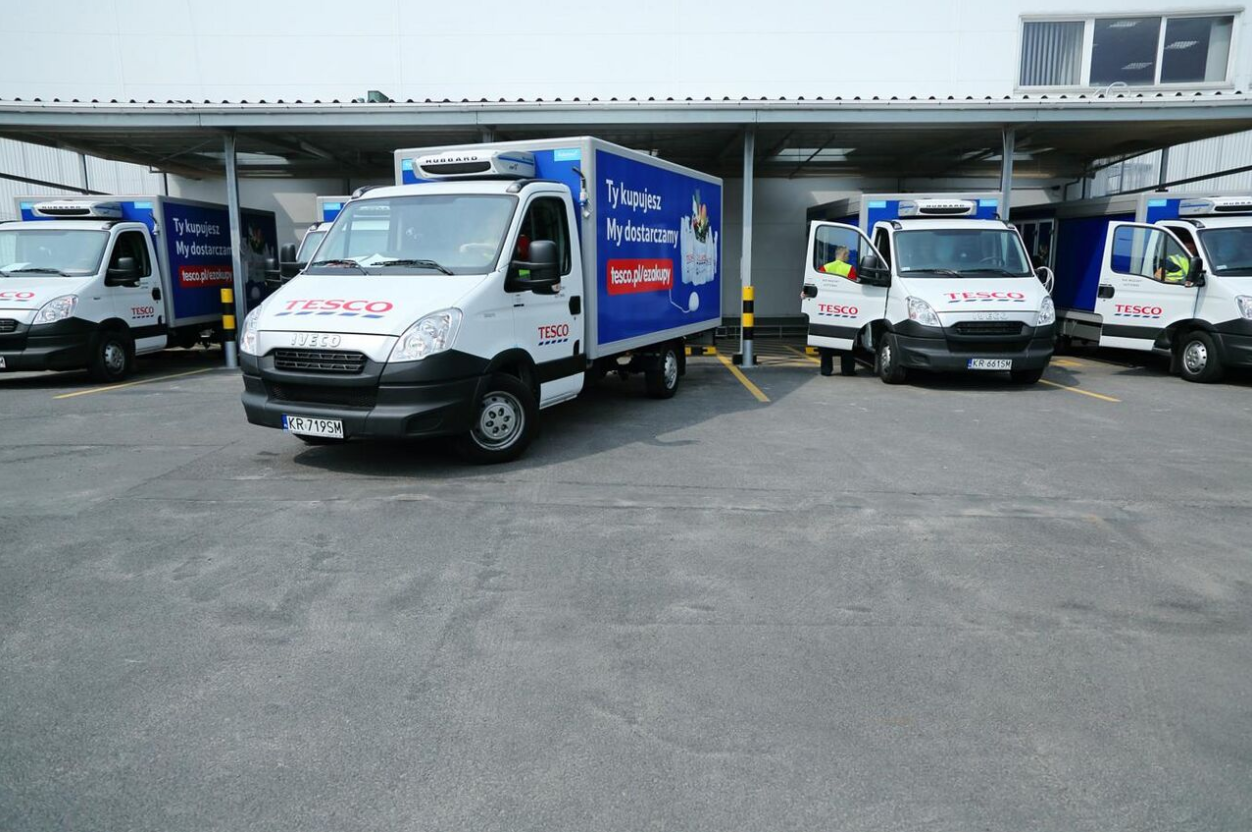 A Tesco delivery van in Poland advertising online ordering and delivery from a brick-and-mortar store. Tesco started their online presence in 1996.[1] https://handwiki.org/wiki/index.php?curid=1957177

One of the first known purchases from a company arguably operating a bricks and clicks business model was a Pizza Hut pizza ordered over the internet in 1994.[2] The great surge in adoption of the bricks and clicks model came around 2000, with large retailers such as Wal Mart starting websites that allow users to browse the same goods they would find in store from the comfort of their homes.[3] 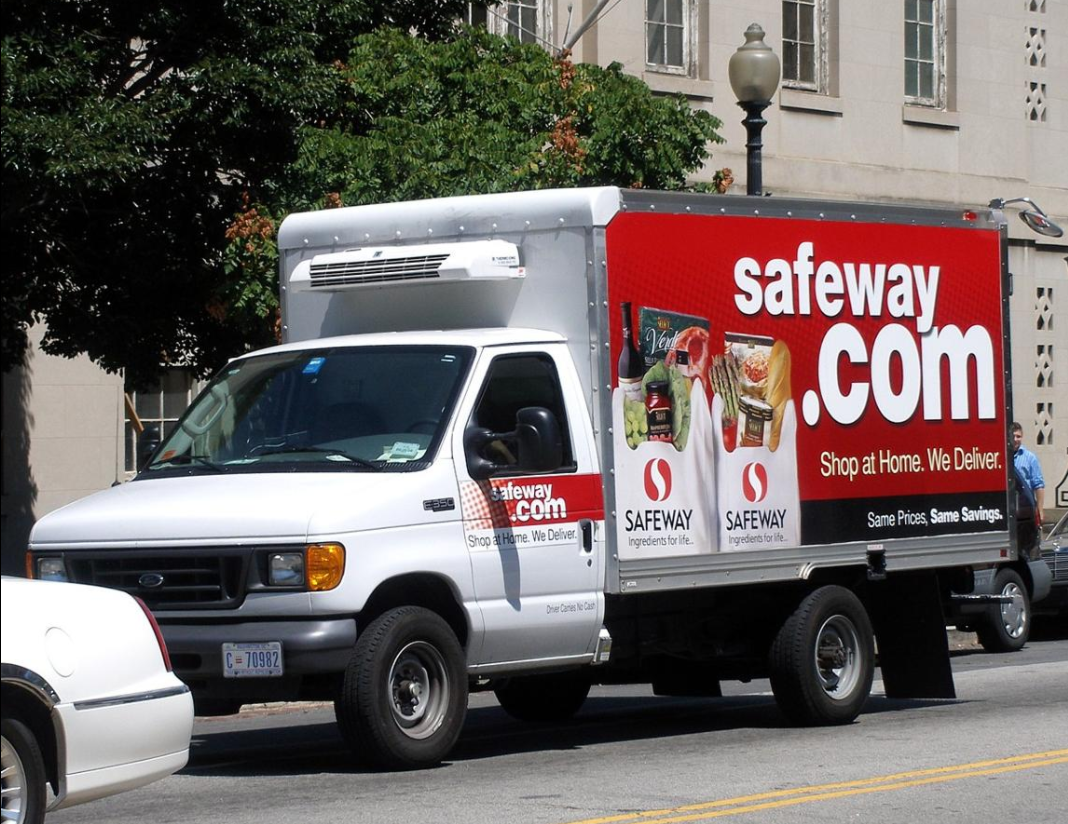 A Safeway delivery truck illustrates how some traditional supermarkets are now pursuing a bricks and clicks strategy. https://handwiki.org/wiki/index.php?curid=1694103

The bricks and clicks model has typically been used by traditional retailers who have extensive logistics and supply chains, but are well known and often respected for their traditional physical presence. Part of the reason for its success is that it is far easier for a traditional retailer to establish an online presence than it is for a start-up company to employ a successful purely online one, or for an online only retailer to establish a traditional presence, including a strong and well recognised brand, without having a large marketing budget.[4] It can also be said that adoption of a bricks and clicks model where a customer can return items to a brick and mortar store can reduce wasted costs to a business such as shipping for undelivered and returned items that would traditionally be incurred.[5]

A bricks and clicks business model can benefit various members of a customer base. For example, supermarkets often have different customer types requiring alternative shopping options; one group may wish to see the goods directly before purchase and like the convenience of quickly shopping on-the-fly, while another group may require a different convenience of shopping online and getting the order delivered when it suits them, having a bricks and clicks model means both customer groups are satisfied. Other previously online-only retailers have stated that they have found benefit in adding a brick-and-mortar presence to their online-only business, as customers can physically see and test products before purchase as well as get advice and support on any purchases they have made.[6] Additionally, consumers are likely to feel safer and have more confidence using a bricks-and-clicks business if they already know the brand from a brick-and-mortar store.[7]

A major factor in the success or failure of this business model is in the control of costs, as usually maintaining a physical presence —paying for many physical store premises and their staffing— requires larger capital expenditure which online only businesses do not usually have. Conversely, a business selling more luxurious, often expensive, or only occasionally purchased products —like cars— may find sales are more common with a physical presence, due to the more considered nature of the purchasing decision, though they may still offer online product information. However, some car manufacturers such as Dacia have introduced online configurators that allow a customer to configure and order complete cars online, only going to a dealership to collect the completed car,[8] which has proven popular with customers.[9]

An advantage to the consumer and a potential disadvantage to businesses is that by adopting a bricks and clicks business model and allowing customers to purchase goods or services remotely, it is legislated in many jurisdictions that consumers are granted more rights to protect them. In the UK, for example, any goods purchased from a bricks and clicks business over a 'click and collect' service would allow the buyer protection under the Consumer Protection (Distance Selling) Regulations 2000, namely the right to return a product or cancel a service within 14 days of purchase for a full refund.[16] Similar rights are afforded to EU Residents, who gain protection under European Directive 97/7/EC. In the USA, the Federal Trade Commission legislate specifically over how a distance sale should be conducted and the rights that a consumer has, namely a '3 day' rule allowing items ordered over the web to be returned within three days.[17]

An example of a retailer falling foul of this legislation is British clothing retailer Next, who were found to be breaking the laws by only allowing a customer to return goods that they had ordered if they paid return postage costs.[18]

In the UK, the method is known as "Click and Collect". This term was invented by British retailer Argos who already offered "Ring and Reserve" and "Text and Take Home" offerings for telephone and SMS ordering respectively, where goods would be held so the customer would pay in store. As these existing services used alliterations for their name, they needed a name for their online ordering proposition and came up with Click and Collect.

British retailer John Lewis has found success in adopting a bricks and clicks business model, with the online ordering service outperforming brick and mortar sales for several years running.[19] Online auction website eBay have also launched a scheme in cooperation with catalogue shop Argos that allows goods sold by third parties to be collected in a brick-and-mortar location, which allows the customer to collect goods at their convenience rather than wait at home for a delivery company.[20]

In 2013, music retailer HMV went into administration despite having operated both brick-and-mortar stores and an online presence.[21] This was put down by many to the high overheads of operating the brick-and-mortar side of the business making HMV unable to compete with pure-clicks retailers such as Amazon.com.[22]

More
©Text is available under the terms and conditions of the Creative Commons-Attribution ShareAlike (CC BY-SA) license; additional terms may apply. By using this site, you agree to the Terms and Conditions and Privacy Policy.
Upload a video for this entry
Information
Subjects: Business
Contributor MDPI registered users' name will be linked to their SciProfiles pages. To register with us, please refer to https://encyclopedia.pub/register :
HandWiki
View Times: 14
Entry Collection: HandWiki
Revision: 1 time (View History)
Update Time: 21 Nov 2022
Table of Contents
1000/1000
Hot Most Recent