+1 point
Thank you for your contribution! You can also upload a video entry related to this topic through the link below: https://encyclopedia.pub/user/video_add?id=34601
Check Note
2000/2000
Robbert Dijkgraaf

Edit
Upload a video
The content is sourced from: https://handwiki.org/wiki/Biography:Robbert_Dijkgraaf
robbert dijkgraaf 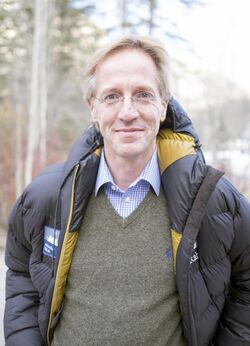 Robertus Henricus "Robbert" Dijkgraaf FRSE (born 24 January 1960) is a Dutch theoretical physicist and string theorist. He is the director and Leon Levy professor at the Institute for Advanced Study in Princeton, New Jersey,[1] and a tenured professor at the University of Amsterdam.

He started his education in physics at Utrecht University in 1978. After completing his Bachelor's degree equivalent in 1982 he briefly turned away from physics to pursue painting at the Gerrit Rietveld Academie. In 1984, he returned to Utrecht University, to start on his master's degree in theoretical physics.

For a few years he worked as a postdoctoral researcher at the Institute for Advanced Study, working alongside Edward Witten.[2]

From 2008 to 2012 he was president of the Royal Netherlands Academy of Arts and Sciences. He was elected as one of the two co-chairs of the InterAcademy Council for the period 2009 to 2013.

Starting 2012, Dijkgraaf became the director of the Institute for Advanced Study, an independent academic institution located in the town of Princeton, New Jersey.[5] On that date, he stepped down from his position as president of the Royal Netherlands Academy of Arts and Sciences.

He has served on numerous boards including at the Teylers Museum and the NEMO Science Museum.[2]

He regularly appears on Dutch television and has a (monthly) column in the Dutch newspaper NRC Handelsblad.

In 1998 Dijkgraaf was an Invited Speaker at the International Congress of Mathematicians in Berlin.[6]

In 2003, Dijkgraaf was awarded the Spinoza Prize.[7] In doing so he became the first recipient of the award whose advisor also was a recipient ('t Hooft received the first Spinoza Prize in 1995). He used part of his Spinoza Prize grant to set up a website targeted at children and promoting science: Proefjes.nl.

Dijkgraaf is an elected Member of the Royal Netherlands Academy of Arts and Sciences since 2003 and of the Royal Holland Society of Sciences and Humanities.

He was elected an Honorary Fellow of the Royal Society of Edinburgh in 2013.

He received honorary doctorates form the Vrije Universiteit Brussel and Leiden University in 2019.[11] In 2019, Dijkgraaf was awarded the inaugural Iris Medal for Excellent Science Communication, presented at the Evening of Science & Society in the Ridderzaal in The Hague, by Ingrid van Engelshoven, Minister of Education, Culture, and Science, in the presence of His Majesty King Willem-Alexander.

Dijkgraaf's research focuses on string theory and the interface of mathematics and physics in general.[1] He is best known for his work on topological string theory and matrix models, and his name has been given to the Dijkgraaf-Witten invariants and the Witten-Dijkgraaf-Verlinde-Verlinde formula.

He lives in Princeton, New Jersey.[12] Dijkgraaf is married to the author Pia de Jong [nl] and has three children.[13] Their daughter Charlotte was born with a rare type of Leukemia and was the subject of book written by her mother Pia de Jong, Saving Charlotte: A Mother and the Power of Intuition.[13]

Dijkgraaf has co-authored and published more than 70 research articles in the field of string theory and physics, with many other researchers including: Cumrun Vafa, Lotte Hollands, Erik Verlinde, Herman Verlinde, Hirosi Ooguri, Gregory Moore, Rajesh Gopakumar, Sergei Gukov, Miranda Cheng, and others. This is a select list of these works: