+1 point
Thank you for your contribution! You can also upload a video entry related to this topic through the link below: https://encyclopedia.pub/user/video_add?id=34553
Check Note
2000/2000
Vera Kistiakowsky 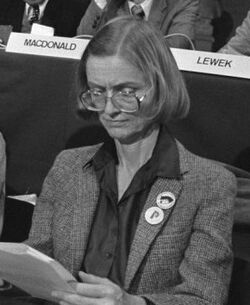 Vera Kistiakowsky (born 1928) is an United States research physicist, teacher, and arms control activist.[1] She is professor emerita at Massachusetts Institute of Technology in the physics department and Laboratory for Nuclear Science, and is an activist for women's participation in the sciences. Dr. Kistiakowsky is an expert in experimental particle physics and observational astrophysics.[2] She was the first woman appointed MIT professor of physics.

Kistiakowsky was born in Princeton, New Jersey in 1928. She is the daughter of physical chemist George Kistiakowsky, who taught at Harvard and served as President Dwight D. Eisenhower's science adviser. Her mother, Hildegard Mabius, was the daughter of a Lutheran pastor and she went to school in Berlin to get her M.D. However, she never got her M.D, and instead worked as a technician and supported medical units on the front lines of World War I.[3] Kistiakowsky's early education in the sciences was greatly influenced by her father. He made special arrangements so that she could spend summers in Los Alamos with him where he was working on the Manhattan Project. During this time she was also attending Mount Holyoke College where "she excelled in chemistry and math, just like her father. 'I thought very highly of my father,' says Vera. 'He told me very seriously that I should find something to do that would support me and not rely on getting married and finding someone who would support me.'"[4]

Kistiakowsky's professional career began in the nuclear chemistry field, later moving to nuclear physics, and then particle physics, and finally astrophysics.[1] She held a postdoctoral fellowship working in experimental nuclear physics with Luis Walter Alvarez.[5] She worked at Columbia University from 1954–1959, first as a research fellow in chemistry, assisting a nuclear chemist; she then found support to become a research associate in the physics department assisting Chien-Shiung Wu.[2] Kistiakowsky and her family moved to Cambridge, Massachusetts when her husband got a job at Cambridge Electronic Accelerator. She then worked at Brandeis University for a short time as an assistant professor before starting work at MIT in 1963.[3] At MIT she began her career as a staff member of the MIT Laboratory for Nuclear Science where she worked from 1963 to 1969. She was Senior Research Scientist in the MIT Department of Physics from 1969 to 1971.

In 1972 she was the first woman appointed MIT professor of physics.[6]

In 1969 she co-founded the Boston area group Women in Science and Engineering (WISE), a precursor to the Boston chapter of the Association for Women in Science (AWIS). Kistiakowsky served as chair or member on numerous MIT committees and groups relating to women at MIT and affirmative action at MIT, including the Women's Forum, and the Ad Hoc Committee on the Role of Women at MIT. In 1971 she founded the American Physical Society (APS) Committee on the Status of Women in Physics, securing a US$10,000 Sloan Foundation grant to produce a questionnaire on women's conditions of employment. The committee also created a roster of female physicists, "to counter claims that there were no qualified ones to hire". The committee's two and a half inch report convinced the APS to establish the Committee on the Status of Women in Physics in 1972, a committee still working today.[7]