+1 point
Thank you for your contribution! You can also upload a video entry related to this topic through the link below: https://encyclopedia.pub/user/video_add?id=34440
Check Note
2000/2000
John B. West

Edit
Upload a video
The content is sourced from: https://handwiki.org/wiki/Biography:John_B._West
physiologist ventilation-perfusion 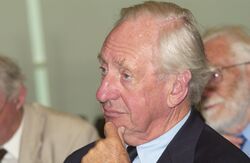 Professor John B. West FRCP (born 1928) is a noted respiratory physiologist who made major research contributions in the area of ventilation-perfusion relationships in the lung.

He worked at Hammersmith Hospital in London in 1960 and received his Ph.D. degree from London University in the same year.

As a physiologist, he joined Sir Edmund Hillary's 1960–61 Silver Hut expedition, a scientific and mountaineering expedition to the Himalayas. Twenty years later, he led the 1981 American Medical Research Expedition to Mt Everest.

After working as a postdoctoral fellow with Hermann Rahn at Buffalo in 1961-62, he returned to London as Director of the Respiratory Research Group at Postgraduate Medical School (1962–67) and was promoted to University Reader there in 1968.

After sabbatical leave at the NASA Ames Research Center at Moffett Field, California in 1968, he was invited to join the faculty of the new School of Medicine at the University of California at San Diego as professor of medicine and physiology.

Other roles include those with the NIH Cardiovascular and Pulmonary Study Section (1971–75; chairman, 1973–75), the Physiology Committee of the National Board of Medical Examiners (1973–76), and the Cardiopulmonary Council of AHA (1977–78).

After election to membership in American Physiological Society in 1970 and to Council in 1981, in 1983 he became president elect, and became the 57th APS President for 1984-85.

For NASA he has been chairman of the Science Verification Committee for Spacelab in 1983 and a member of their Advisory Committee on Scientific Uses of Space Station in 1984. Also in that year he served as a member of a NAS Committee on Space Biology.

Since it was first published in 1974, his book Respiratory Physiology: the Essentials (Lippincott Williams & Wilkins) has become the most widely used introductory text in respiratory physiology. It has been translated into at least 17 languages.

He has held nearly twenty endowed lectureships, including

He has numerous research publications, predominantly in the following areas of pulmonary physiology: