+1 point
Thank you for your contribution! You can also upload a video entry related to this topic through the link below: https://encyclopedia.pub/user/video_add?id=31440
Check Note
2000/2000
¡Democracia Real YA!

Edit
Upload a video
The content is sourced from: https://handwiki.org/wiki/Organization:%C2%A1Democracia_Real_YA!

¡Democracia Real YA! (DRY, Spanish for Real Democracy NOW!), also known as Plataforma Democracia Real Ya! (Real Democracy NOW Platform!), is a grassroots citizens' organization that was started in March 2011 in Spain. It sparked the political movement of May 15, 2011 (15M) whose protests gained worldwide attention. The protests been compared to the May 1968 social movement in France. ¡Democracia Real YA! is associated with approximately 200 smaller organizations. ¡Democracia Real YA! states in its manifesto that it is a broad social movement, dedicated to nonviolent protest, and that maintains no affiliation with any political party or labor union. It has not appointed any single leader and is unwilling to join any of the existing political bodies. It is, however, not an entirely apolitical movement. ¡Democracia Real YA! considers the current political and economic system incapable of listening to and representing its citizens and therefore demands changes to the current social and economic policies, which have led many people into unemployment, loss of their homes, and poverty. The organization denounces the way big businesses and banks dominate the political and economic sphere and aims to propose a series of solutions to these problems through grassroots participatory democracy and direct democracy, which is based on people's assemblies and consensus decision making. The movement drew inspiration from the 2009 Icelandic financial crisis protests, the Arab Spring, the 2010–11 Greek protests and the 2010–11 revolutions in Tunisia. The protest movement gained momentum on May 15 with a camping occupation in Madrid's main square, the Puerta del Sol, spreading to squares in 57 other major and smaller cities in Spain, and then to Spanish embassies all around the world. In April 2012 some of the initiators of the movement, following an Extraordinary General Meeting of the Platform held in Leganes, the movement split announcing the creation of an organizational structure and rules as a partnership, taking the same name, Asociación Democracia Real Ya, which caused the rejection of part of the rest of the members of the movement. Thus, there are currently active platform Real Democracy Now! on the one hand, and the association DRY on the other hand.

1. Protests Organized by ¡Democracia Real YA!

Shortly after Stéphane Hessel's 2010 tract Time for Outrage! (Indignez-vous!) and Rosa María Artal's 2011 book, React (Reacciona) were published, DRY organized demonstrations in 50 Spanish cities for May 15, 2011. The demonstrations requested a new democratic model denouncing the corruption of politicians and the powerful influence of banks in the political sphere. The movement refused to support any specific political party or labor union, and thousands of citizens mobilized under the slogan "Real democracy NOW, We are not merchandise for bankers and politicians." After the very first demonstration in Madrid, a few of these protesters attempted an overnight occupation of the Puerta del Sol; they were consequently arrested the following morning on May 17. On the first night of protests, 19 students were arrested and charged for public disorder and damaging public property. Eighteen of the arrested individuals were kept for two days, and one was released for health reasons. According to witnesses of the event, there was reported "abuse of authority" by the police when handling the protesters.[1] Those protesters who stayed in the Puerta del Sol demanded the students be released and that all charges be dropped. On May 17, the 18 remaining students were released, but protesters stood outside the gates of the courts demanding their acquittal.[2][3] After the eviction, DRY stated,

As the organizers of the protest distance ourselves from, and reject, all violent incidents that occurred after the protest in Madrid. According to our sources, the incidents of violence, although completely reprehensible, were minimal, occurring for the most part after the protests of peaceful civil disobedience. The State Security Forces acted in a disproportionate and excessive manner, which we equally condemn, and we wish to show our solidarity with those who were unjustly injured and detained for the mere fact of having been there without provoking anyone.[4]

In response, ten thousand people returned to the plaza with the intent to remain until the elections on Sunday, May 22. Camps began to spread beyond the Puerta del Sol to main squares in many other cities throughout Spain,[5] and eventually Europe. On May 18, the Board of Elections of Madrid prohibited the protest in the Puerta del Sol, and protests were also banned in Granada. This resulted in an influx of protesters, or as they called themselves "indignados" - the outraged. The gathering was organized via Twitter. Police surrounded the protestors on the 18th, but made no attempts to interfere. In the days before Spanish regional elections ¡Democracia Real YA! clarified that the camps had been organized by individuals, not by DRY. They stated that they were not seeking abstention, but rather long term change to political and financial institutions in order for them to better serve the majority of the population. 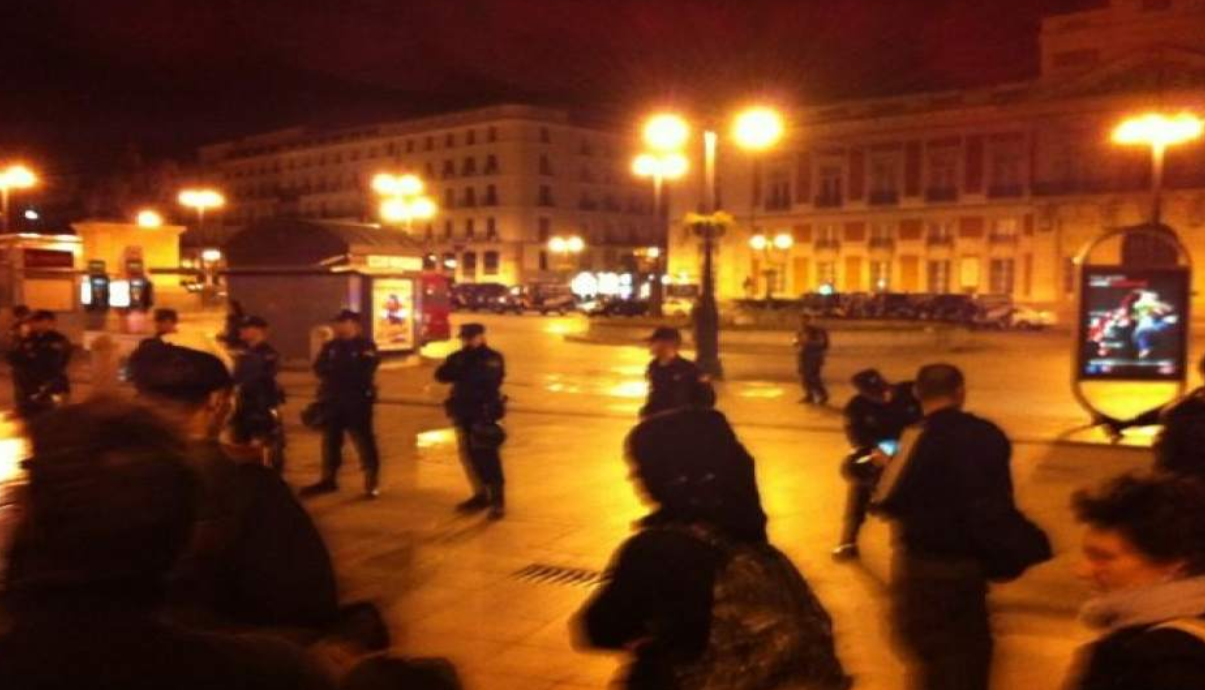 The Central Board of Elections met to decide definitively about the fate of the protests prior to the election. Twenty-four hours immediately preceding and election day is called The Day of Reflection, during which all political campaigning is prohibited. The Board ruled that the encampments must be broken up during that period.[6] It was decided that the protests were politically charged in such a way that they might affect the outcome of the elections. President Zapatero agreed with the Board's ruling.[7] On May 21, many of the encampments across Spain were raided. No violence accompanied this dispersal; the police were ordered not to use force. Despite the Election Board's ruling, there were protesters that remained. Some of those remaining protesters symbolically taped their mouths shut as they were ordered to be silent.[8]

Despite allegations of being a left-wing movement, Democracia Real YA's manifesto, and the movement's rhetoric in general,[9] claim to transcend the traditional one-dimensional left-right paradigm and call for a democratic regeneration:

Some of us consider ourselves progressive, others conservative. Some of us are believers, some not. Some of us have clearly defined ideologies, others are apolitical, but we are all concerned and angry about the political, economic, and social outlook which we see around us; corruption among politicians, businessmen, bankers, leaves us helpless, without a voice. This situation has become normal, a daily suffering, without hope. But if we join forces, we can change it. It's time to change things, time to build a better society together. "Democracia Real YA Manifesto". http://www.democraciarealya.es/manifiesto-comun/manifesto-english/.

The manifesto emphasizes the responsibility of the government to provide all of its citizens with "the right to housing, employment, culture, health, education, political participation, free personal development, and consumer rights for a healthy and happy life." Democracia Real Ya calls for an ethical revolution, and a recognition of the priority of "equality, progress, solidarity, freedom of culture, sustainability and development, welfare and people's happiness." [10] The manifesto has been criticised for not recognising how Spain's largely uncritical embrace of some aspects of cultural modernity - consumerism and hedonism in particular - has in many respects created the economic crisis.[11]

¡Democracia Real YA! and the protesters have stated that their demands are that the Spanish government:

They believe that these demands will bring about the change in society needed to assist those who are not among the country's privileged elite and to ensure that Spain functions as a true democracy in which the people's voices are heard and considered. [12]

2.2. May Elections and Future Directions for DRY

On May 22, the Popular Party won in a majority of Spanish local and regional elections. The Popular Party, the conservative party in Spain, was able to win the election because the liberal vote was fractured among multiple political parties (the greatest harm being done to the Spanish Socialist Worker's Party).[13] The results of this election have led some to criticize of the electoral system. Some have also noted that the economic crisis currently facing Spain almost guaranteed a majority victory for the Popular Party in the November Elections.[14]

For the November 20, 2011 elections, the Madrid Electoral Board banned any protest in any square or street fifteen days before the election. Despite this ban, plans were made for protests on the 11th and 13th, as the ban was expected to increase protest participation.[15]

They intend to increase citizen participation in politics through technology, like voting Congress initiatives over the Internet. If the movement strives to stay away from the traditional parties, which are backed by the majority of citizens (61 percent voted for a party in the last election), it is doubtful that the Spanish Revolution can make their proposals work. Another recurring criticism is its difficulty to define specific measures. Most experts say that the Spanish Revolution will be dissolved, but before this happens, they will be able to prepare the field for fundamental changes aimed at improving citizen representation and limiting the excesses of the political and economic systems." [15]

While the concentration of economic and political power are at the heart of the protests in Spain, other sources of inspiration include the financial crisis of Iceland, the film Inside Job, and the text Time for Outrage! (English translation), a booklet written by a concentration camp survivor and member of the French Resistance, Stéphane Hessel. The protests in Spain are part of a global unrest brought about by austerity measures implemented by various governments, such as pension reform for public employees in Wisconsin.[16][17]

Locations of similar protests around the world

Other protests with similarities to the Spanish protests include:[18]

The Protests in Spain also inspired the Occupy Wall Street movement[19] Democracia Real Ya calls for the immediate return of control over the polis and government back to the people. As demonstrated by protesters camping out in Zuccotti Park in Manhattan, Tahrir Square in Cairo, Puerta del Sol in Madrid, and Plaça Catalunya in Barcelona, there is a general discontent for the usurpation of public control by private interests. Those encamped hope to raise awareness and support for their cause of putting people ahead of corporate interests and making sure that democratic governments around the world are capable of serving as voices of the voting public.[20]

The movement is made up of individuals as well as a coalition of around 200 various grassroots organizations such as:

More
©Text is available under the terms and conditions of the Creative Commons-Attribution ShareAlike (CC BY-SA) license; additional terms may apply. By using this site, you agree to the Terms and Conditions and Privacy Policy.
Upload a video for this entry
Information
Subjects: Others
Contributor MDPI registered users' name will be linked to their SciProfiles pages. To register with us, please refer to https://encyclopedia.pub/register :
HandWiki
View Times: 27
Entry Collection: HandWiki
Revision: 1 time (View History)
Update Time: 26 Oct 2022
Table of Contents
1000/1000
Hot Most Recent