+1 point
Thank you for your contribution! You can also upload a video entry related to this topic through the link below: https://encyclopedia.pub/user/video_add?id=31310
Check Note
2000/2000
Diacylglycerol Kinase in the Amelioration of Diabetic Nephropathy

The drastic increase in the number of patients with diabetes and its complications is a global issue. Diabetic nephropathy, the leading cause of chronic kidney disease, significantly affects patients’ quality of life and medical expenses. Furthermore, there are limited drugs for treating diabetic nephropathy patients. Impaired lipid signaling, especially abnormal protein kinase C (PKC) activation by de novo-synthesized diacylglycerol (DG) under high blood glucose, is one of the causes of diabetic nephropathy. DG kinase (DGK) is an enzyme that phosphorylates DG and generates phosphatidic acid, i.e., DGK can inhibit PKC activation under diabetic conditions. Indeed, it has been proven that DGK activation ameliorates diabetic nephropathy.

Diabetes is a chronic metabolic disease that causes high blood glucose levels, resulting in serious health problems and death. In 2021, the number of people living with diabetes globally was estimated to be 536.6 million (prevalence: 10.5%), and this number is expected to reach 783.2 million (prevalence: 12.2%) by 2045 [1]. Diabetes significantly increases the risk of various health issues such as heart attacks, strokes, and infections compared to healthy individuals [2][3]. Diabetes also causes serious vascular complications. Diabetic retinopathy, neuropathy, and nephropathy are major microvascular complications of diabetes caused by microangiopathy. These complications lead to blindness, gangrene, and end-stage renal disease, respectively. Diabetic nephropathy (DN) is the leading cause of chronic kidney disease (CKD) in the world, leading to the need for dialysis, reducing patients’ quality of life, and increasing medical care expenses.
DN causes glomerular filtration failure that leads to uremia in one in three diabetic patients after several years of latency [4]. Since a high blood glucose level is the fundamental cause of the complications, delaying the onset of DN by controlling the blood glucose level is the primary treatment strategy [5]. Recently, many drugs to control blood glucose levels, such as insulin, sodium-glucose co-transporter-2 (SGLT-2) inhibitors, and glucagon-like peptide-1 (GLP-1) receptor agonists, have become available. It is also well recognized that the renin-angiotensin-aldosterone system (RAAS), which controls arterial pressure, plays a pivotal role in the pathogenesis of DN. So far, drugs targeting the RAAS, such as angiotensin-converting enzyme (ACE) inhibitors and angiotensin II receptor blockers (ARBs), have been the first choice for preventing and delaying the onset of DN. However, there are limits to the drugs available for DN, and there are no specific therapeutics for ameliorating DN once hyperglycemia and high blood pressure become uncontrolled. Although controlling blood glucose levels is the most simple and effective approach to delaying the onset of microvascular complications, and inhibiting RAAS is effective for DN, finding a novel target with a renoprotective effect was necessary. Therefore, to develop a novel drug for DN, it was vital to understand the mechanisms of the development and progression of DN and find an effective therapeutic target. 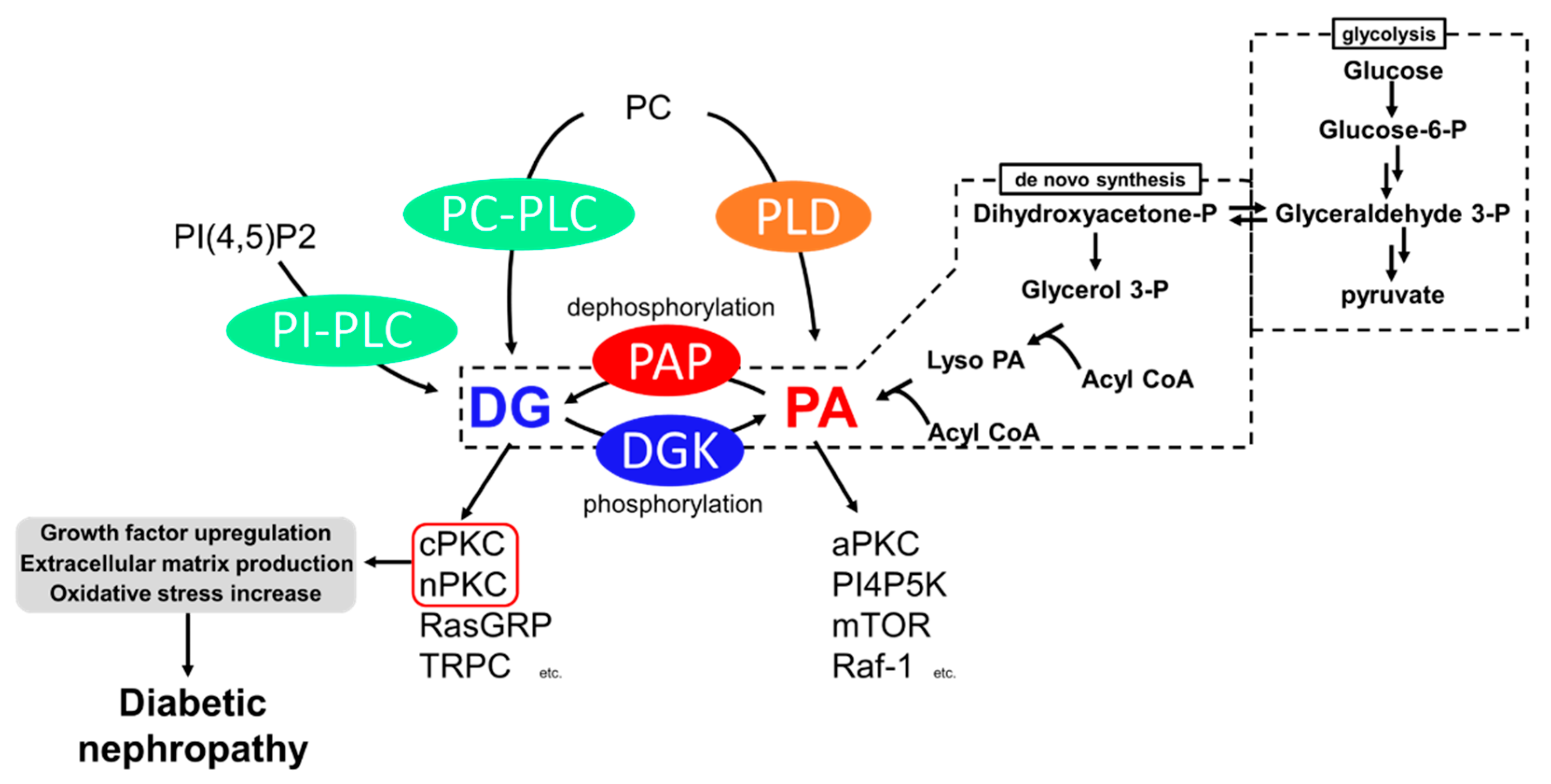 PKC is a family of serine/threonine kinases, and nine mammalian isozymes are categorized into three groups based on their domain structure and characteristics [23]. cPKC (PKCα, β, γ) possesses diacylglycerol (DG) binding C1 domains (C1A and C1B) and a Ca2+ binding C2 domain, and their activity depends on DG and Ca2+ [24][25]. nPKC (PKCδ, ε, η, θ) has a slightly different domain composition than cPKC and lost Ca2+ dependency [26]. The DG-responsive characteristics of cPKC and nPKC are crucial to the pathogenesis of DN. The final subfamily requires neither Ca2+ nor DG for its activity and was cloned and classified as aPKC (PKCι, ζ). It is activated by PA [27][28]. These PKCs phosphorylate many proteins, including receptors, transporters, kinases, and phosphatases; thus, PKCs play a central role in cell signaling [23]. To date, the increase in DG mass and the abnormal activation of cPKC and nPKC under hyperglycemic conditions have been observed in vivo and in vitro [29][30][31], and evidence supports the idea that the abnormal activation of cPKC and nPKC is one of the causes of the development and progression of diabetic nephropathy [32][33][34][35].
Abnormally activated PKC causes various biological changes, such as growth factor upregulation, extracellular matrix production, and oxidative stress increase (Figure 1). Among PKC isozymes, activation of PKCα, β (cPKC) and PKCε, δ (nPKC) have been observed in DN [28][34][35][36][37][38]. One of the mechanisms underlying how PKC activation causes DN is related to various growth factors [39]. The upregulation of transforming growth factor-β (TGF-β) signaling, a profibrotic cytokine, is considered a critical pathogenic and progression factor of DN by activating various signal transductions, expression of the extracellular matrix, and reactive oxygen species production [40][41]. It has been reported that diabetes-induced activation of PKCβ and PKCδ upregulates TGF-β expression and the sensitivity of the cell against TGF-β, promoting the production of the extracellular matrix [42][43]. In addition to TGF-β, connective tissue growth factor (CTGF) and vascular endothelial growth factor (VEGF) are also recognized as key factors in DN progression [37]. CTGF is known to promote extracellular matrix production, leading to fibrosis [44]. VEGF is known as an angiogenic factor promoting vascular endothelial cell proliferation and pathological angiogenesis [45]. Several studies have reported that activation of PKCα, β, and ε upregulates VEGF expression [46][47], and PKCβ upregulates CTGF expression [34]. Therefore, PKC inhibition can normalize these growth factor expressions and signaling and ameliorate DN. Moreover, PKCα and β are associated with reactive oxygen species (ROS) production by activation of NADPH oxidase, causing renal injury [34][48].
To develop drugs targeting abnormal PKC activation, a PKCβ-specific inhibitor, ruboxistaurin, was developed and showed a renoprotective effect in several animal studies [49][50]. However, in human clinical trials, although ruboxistaurin showed some renoprotective effect in diabetes patients, statistical significance was not observed compared to placebo patients [35]. Furthermore, since DG–PKC pathway activation is a common event in other diabetic microvascular complications, ruboxistaurin underwent phase 3 clinical trials for diabetic retinopathy. Nevertheless, the trial failed due to the insignificance of its effect on retinopathy compared to the placebo group [51]. Taken together, the upregulation of the DG–PKC pathway in diabetes is one of the key events in the pathogenesis and progression of DN. However, since several independent PKC isoforms are involved in complex and multifactorial pathways, developing a drug targeting PKC is not simple. For example, PKCα deficiency prevents albuminuria by reducing VEGF. However, glomerular hypertrophy is not inhibited due to no change in TGF-β expression [33]. In contrast, PKCβ deficiency prevents glomerular hypertrophy by reducing TGF-β but not albuminuria in mice [34][52]. Therefore, inhibiting a single PKC might be insufficient to prevent DN. One can overcome this by developing a pan-inhibitor for cPKC and nPKC, or a combination of several specific inhibitors, though issues with side effects may emerge.

DG kinase (DGK) is a family of enzymes that converts DG into PA by phosphorylation [53]. As illustrated in Figure 1, DGK is a central regulator in various signaling pathways related to DG and PA [54]. Since DGKs consume DG, DGK is recognized as an indirect inhibitor of cPKC and nPKC. So far, 10 subtypes of mammalian DGKs have been discovered and divided into Type I~V based on their structural characteristics [54][55][56][57]. All mammalian DGKs have several C1 domains homologous to the one of PKCs at the nitrogen ends of catalytic domains (CD). Type I DGKs (DGKα, β, γ) have a recoverin homology (RVH) domain and two EF-hand motifs, which bind to Ca2+ at the nitrogen end of the two C1 domains [58]. Type II DGKs (DGKδ, η, κ) are characterized by a split CD, with a pleckstrin homology domain (PH domain) at the N terminus. Among Type II DGKs, DGKδ and η have a sterile α motif domain (SAM domain) at the C terminus [59][60][61]. DGKε has a simple structural feature composed of two C1 domains and a CD and is the only Type III DGK subtype [62]. Type IV DGKs (DGKζ, ι) possess ankyrin repeats at the C terminus, and residue between the C1 domains and the CD have homologs to the myristoylated alanine-rich C-kinase substrate phosphorylation site [63][64][65]. Type V DGKs (DGKθ) is the only subtype that has three C1 domains, and a PH domain overlapping the Ras-associating domain (RA domain) is localized between the C1 domains and the CD [66]. In addition, splicing variants to alter their domain composition has been reported in several subtypes.
Vitamin E is a hydrophobic antioxidant agent, and α-tocopherol is the most active vitamin E compound that humans preferentially absorb [67]. The main function of α-tocopherol is its antioxidant effect, preventing lipid peroxidation in the cell membrane [68]. In 1997, it was reported that α-tocopherol ameliorates the symptoms of DN by activating DGK and inhibiting glomerulus PKC in diabetic rats, suggesting the possibility of DGK as a therapeutic target for DN [69][70]. However, the subtype of DGK involved in the amelioration was unclear. In 2005, it was revealed that a Type I DGK, DGKα, is sensitive to α-tocopherol among the DGKs expressed in the murine glomeruli (DGKα, γ, δ, ε, and ζ) [71], i.e., in the cultured cell, α-tocopherol induced translocation of GFP tagged DGKα to the plasma membrane, which is the hallmark of DGK activation, while the other DGKs did not [72][73]. Although the primary function of α-tocopherol as a vitamin is its antioxidant effect, several studies have reported that the antioxidant effect of α-tocopherol is not related to PKC inhibition [74][75]. Indeed, it was revealed that the antioxidant effect of α-tocopherol is not necessary to activate DGKα [73]. There is a report showing that the antioxidant effect of α-tocopherol plays a protective role against the loss of activity of DGKα under the high glucose condition [76]. The detailed mechanisms of DGKα activation by α-tocopherol are discussed in a later section.

More
© Text is available under the terms and conditions of the Creative Commons Attribution (CC BY) license; additional terms may apply. By using this site, you agree to the Terms and Conditions and Privacy Policy.
Upload a video for this entry
Information
Subjects: Biochemistry & Molecular Biology
Contributors MDPI registered users' name will be linked to their SciProfiles pages. To register with us, please refer to https://encyclopedia.pub/register :
Daiki Hayashi
,
Yasuhito Shirai
View Times: 39
Revisions: 2 times (View History)
Update Time: 27 Oct 2022
Table of Contents
1000/1000
Hot Most Recent