Submitted Successfully!
Thank you for your contribution! You can also upload a video entry related to this topic through the link below:
https://encyclopedia.pub/user/video_add?id=297
Check Note
2000/2000
GOLPH3, a PI(4)P Binding Protein
Edit

Golgi phosphoprotein 3 (GOLPH3), a Phosphatidylinositol 4-Phosphate [PI(4)P] effector at the Golgi, is required for several intracellular functions, including Golgi ribbon structure maintenance, Golgi glycosylation and vesicle trafficking. It is amplified in several solid tumor types and its overexpression correlates with poor prognosis. GOLPH3 influences tumorigenesis through (i) regulation of Golgi-to-plasma membrane trafficking; (ii) turnover and glycosylation of cancer-relevant glycoproteins; (iii) influence on DNA damage response and maintenance of genomic stability.

An increasingly number of reports in the last years demonstrated that intracellular vesicle trafficking deregulation is a feature of several cancers [1][2]. Golgi phosphoprotein 3 (GOLPH3) is the first recognized example of a Golgi resident oncoprotein[3] and it was originally identified in studies investigating the Golgi proteome[4][5]. GOLPH3 protein is highly conserved from yeast to humans, and localizes to the trans-Golgi via the direct interaction with PI(4)P; this localization is mediated by its unique C-terminal GPP34 domain[6][7] and is necessary to maintain Golgi architecture in human cells and Drosophila melanogaster[6][8].

2. Roles of GOLPH3, a PI(4)P Binding Protein, in the Physiopathology of Cancer

By using unbiased genome-wide copy number analysis, Scott and coauthors[9] identified a recurrent 5p13 amplification in several human solid tumors such as melanoma, colon adenocarcinoma and non-small-cell lung cancer. Four genes map within this chromosomal region and GOLPH3 was demonstrated to be the gene targeted for activation in cancers; in fact, its depletion is sufficient to revert oncogenic transformation in cell cultures. In addition, GOLPH3 cooperates with activated HRASV12 to increase transformed focus formation in Ink4a/Arf-deficient primary mouse embryonic fibroblasts[9]. Moreover, GOLPH3 up-regulation significantly enhances mouse xenograft tumor growth in vivo. Overall these data support the role of GOLPH3 as an oncogene[9]. Since this study, more than 30 research papers showed the overexpression of GOLPH3 in several cancers including melanoma, lung cancer, breast cancer, glioma, and colorectal cancer[10][11]. Several of them also provided evidence that GOLPH3 promotes cell proliferation and tumorigenicity of MDA-MB231 and MCF-7 breast cell lines and U251 and U87 glioblastoma cell lines[12][13][14][15]. Furthermore, it has been shown that overexpression of GOLPH3 is frequently associated with poor prognosis in multiple tumor types including 52% of breast cancers[13] and 41-53% of glioblastoma[14][15]. These findings support the role of GOLPH3 in cancer progression.

The oncogenic activity of GOLPH3 has been primarily correlated with its ability to influence signaling downstream of the mammalian target of rapamycin (mTOR), resulting in enhanced activation of both mammalian TORC1 and TORC2 complexes[9][10]. This idea has been recently supported by preclinical treatment studies showing that GOLPH3-expressing tumors are much more sensitive to mTOR inhibitors, suggesting that GOLPH3 levels might predict rapamycin efficacy in tumor therapy. However, the mechanistic basis that links the mTOR pathway to GOLPH3 remains to be elucidated, and multiple molecular mechanisms have been suggested to explain how GOLPH3 drives cancer[16][17].

The review of Sechi and co-workers[18] highlights the cellular processes that require GOLPH3 protein and the molecular pathways involved in GOLPH3-driven oncogenic transformation and metastasis in different types of tumors. It also reports the effects of using some chemotherapeutic drugs (such as gefitinib, 5-Fluorouracil or temozolomide), so that GOLPH3 knockdown might be exploited in combination with these substances to enhance the efficacy of chemotherapy in some tumor types. 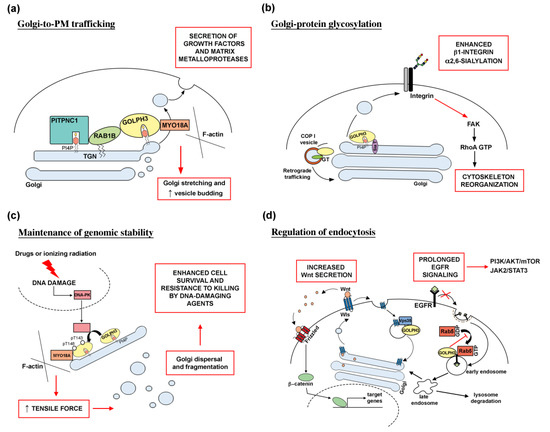 Figure 1. Molecular mechanisms underlying GOLPH3 function in human cancer. (a) Altered Golgi-to-PM trafficking. Recruitment of the PI(4)P-binding protein GOLPH3 at the trans-Golgi network (TGN), requires the PITPNC1/RAB1B network. Overactivation of the GOLPH3/MYO18A pathway leads to Golgi extension and enhanced vesicle release, resulting in the massive secretion of growth factors and matrix metalloproteases, which are responsible for cancer malignancy. (b) GOLPH3 role in Golgi-protein glycosylation. GOLPH3 is involved in COPI-mediated retrograde trafficking of several Golgi glycosyltransferases (GT). GOLPH3 protein binds to sialyltransferases (Sia T); its overexpression results in enhanced α2,6-sialylation of β1-integrins. Altered glycosylation affects integrin-mediated signaling pathway, leading to activation of FAK (focal adhesion kinase) and RhoA-dependent actin cytoskeleton reorganization and cell migration. (c) GOLPH3 is required for Golgi ribbon reorganization in response to DNA damage. DNA damage, induced by treatment with drugs and ionizing radiation, leads to activation of the DNA damage protein kinase (DNA-PK) that phosphorylates GOLPH3 on T143 and T148 residues. In turn, phosphorylation of GOLPH3 increases its interaction with MYO18A and its tensile force on the Golgi, leading to fragmentation of Golgi membranes and their dispersal throughout the cytoplasm. Massive Golgi fragmentation has been correlated to tumor development and maintenance since it is linked to cell survival and resistance to killing by DNA-damaging agents. (d) Relationship between GOLPH3 oncogenic activity and endocytic trafficking. GOLPH3 associates with the retromer complex subunit Vps35 to regulate recycling of several transmembrane receptors including the Wnt chaperone Wntless (Wls). In glioma cell lines, GOLPH3 overexpression increases Wls recycling and Wnt secretion, leading to abnormal Wnt/β-catenin signaling. GOLPH3 oncogenic activity in endocytic trafficking is responsible for a prolonged EGFR signaling. GOLPH3 binds to Rab5 and inhibits its activation on early endosome. High levels of GOLPH3 protein impair Rab5-mediated endocytosis and degradation of EGFR. As a result, overactivation of downstream signaling pathways such as PI3K/AKT/mTOR and JAK2/STAT3 promote cell proliferation and tumor transformation. 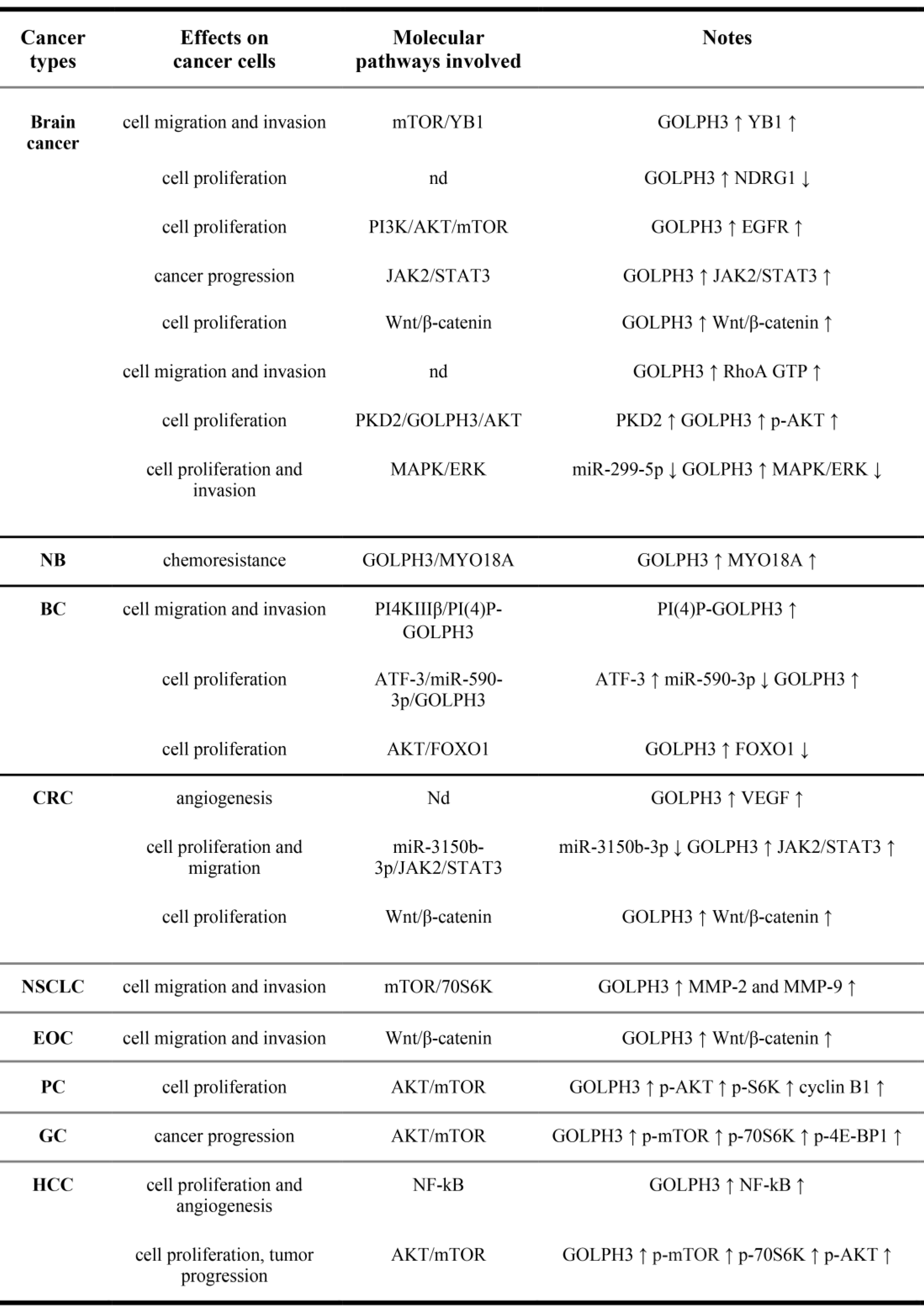 Tumors in which the role of GOLPH3 had been better elucidated include glioma, breast cancer and colorectal cancer. In gliomas, the role of GOLPH3 in cancer cell growth, migration and invasiveness have been partly elucidated. Glioma is the most common tumor of the brain and the role of GOLPH3 in its etiology dates back to 2011, when Li and collaborators showed a more than half of their patients affected by glioma were positive for the overexpression of either GOLPH3 protein or RNA, and that the amount of GOLPH3 expression in those patients was associated with the severity of the tumor[19]. Accordingly, also a relation between low GOLPH3 expression and significantly longer median overall survival has been demonstrated[15]. In breast cancer, it has been shown that GOLPH3 is significantly upregulated in both cell coltures and in patients, and that its upregulation significantly correlates with the advanced clinical stage of breast cancer, poorly differentiated tumors and worse prognosis[12][20]. Moreover, upregulated GOLPH3 also influences the migration/invasion capacity of these cells[13]. Finally, GOLPH3 level has been also associated with the clinical stage of the disease, lymph node metastasis and infiltration degree in colorectal cancer[21][22] and, at the same time, seems to confer resistance to some chemotherapeutic drugs, although these last data need further validation. The molecular pathways and the de-regulations occurring in glioma, breast and colon cancer pathogenesis are summarized in Figure 2 and referenced in[18].