+1 point
Thank you for your contribution! You can also upload a video entry related to this topic through the link below: https://encyclopedia.pub/user/video_add?id=27464
Check Note
2000/2000
Pierre Vogel 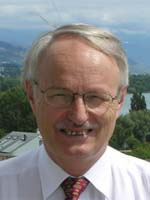 Professor Pierre Vogel was born in Cully (Switzerland). He did his Ph. D under supervision of Prof. H. Prinzbach, at the Institute of Organic Chemistry, in the University of Lausanne. He carried out post-doctoral research at Yale University (New Haven, Connecticut, USA), collaborating with Profs. M. Saunders, J.A. Berson, K.A. Wiberg and P.v.R. Schleyer (Princeton University). He then moved to Mexico City, where he worked as a Research chemist at Syntex S.A. with Prof. P. Crabbé.

In 1973 he returned to the University of Lausanne, where he became Professor of organic chemistry in 1977. In 1976, he received the Alfred-Werner Medal of the Swiss Chemical Society. He was part-time doctoral school teacher at the Universities of Rouen and Caen from 1991 to 1993 and part-time professor at the Ecole Polytechnique in Palaiseau (France) from 1993 to 2000. He was Vice-Chairman of the Institute of Organic Chemistry at the University of Lausanne from 1991 until 2001. He has been Pacific Coast (USA) Lecturer in 1992, and invited professor at the Universities of Montpellier, Paris-Sud, Ecole Supérieure de physique et de chemie industrielles de la ville de Paris (ESPCI) and Complutense (Madrid). He was awarded with the Novartis Lecturership in 2003, and has been Boeringer Ingelheim Distinguished Lecturer in 2005. From 2000-2001, he was reviewer of the Institut Universitaire de France, and as of 2001, Professor of organic chemistry at the Ecole Polytechnique Fédérale de Lausanne (EPFL). He also served as the Director of the doctoral program in chemistry and chemical engineering of the EPFL (2002-2010). Since 2011, he is Honorary Professor of the EPFL, responsible of the medicinal chemistry laboratory of the Ludwig Institute for Cancer Research, in collaboration with the EPFL. He also participates in the European FP7 health program on pancreatic cancer.

As the fruit of his research, Prof. Pierre Vogel contributed more than five hundred articles in refereed journals, eleven patents and several books.

From among Prof. Vogel’s contributions, the total synthesis and determination of the absolute configuration of (-)-Dolabriferol (Angew. Chem. Int. Ed. 2010, 49, 8535-8537) or the concise synthesis of complicated polypropionates through one-pot dissymmetrical two-directional chain elongation (Chem. Eur. J. 2011, 17, 4246-4253) are good examples of elaborated and refined research work on combinatorial and asymmetric synthesis of natural products and analogues of biological interest. Special attention deserves his research on the anti-cancer anthracyclines, polyketide and polypropionate antibiotics (Pure Appl. Chem. 2008, 80, 791-805).

Very recently, Prof. Pier Vogel coauthored, together with Prof. Kendal N. Houk, an organic chemistry textbook (Organic Chemistry. Theory, Reactivity and Mechanisms in Modern Synthesis, Wiley-VCH, 2019) which fills a gap in current literature on physical organic chemistry. Indeed, physical chemistry tools (quantum chemistry, statistical mechanics, thermodynamics, kinetics) are utilized throughout this book to rationalize organic reactions, giving the reader the opportunity of gaining a deeper insight into their mechanistic aspects. It is a modern organic chemistry textbook, of interest for students, teachers and researchers, which is being called to become the “bible” of the 21st Century organic chemists.