+1 point
Thank you for your contribution! You can also upload a video entry related to this topic through the link below: https://encyclopedia.pub/user/video_add?id=25607
Check Note
2000/2000
Expansion of the Research Scope of Spatial Mismatch

A growing number of studies have realized that spatial mismatch itself was from the beginning not only about how space interacts with the labor market, but about how space is related to race, transport, skills, social relations, occupational segmentation, and other elements that influence labor market outcomes, and that spatial mismatch needs to be understood and constructed in a broader context. With further suburbanization, changes in demographic characteristics, housing market reforms, and economic restructuring, and urban sprawl, scholars have begun to reassess the diametrically opposed findings on spatial mismatch by placing them in the new socio-economic context and working to expand the possibilities of spatial mismatch in terms of the group concerned, influencing factors, indicator methods, spatial relationships, and consequential effects.

1. Expansion of the Group Concerned

Since the late 1990s, spatial mismatch research has shifted from simply examining spatial mismatch to disentangling the influences that trigger it. Early scholars had mainly attributed spatial mismatch in US metropolitan areas to the suburbanization of employment and the residential-employment separation under housing market segregation [20][21]. Later, a growing number of studies have argued that it is important to focus not only on the spatial separation of residence and employment, but also on the processes of connection or barriers between employment opportunities and workers [22][23], i.e., what prevents ethnic minorities such as inner-city Blacks from supplying labor to suburban areas where labor demand is growing. Residential immobility, commuting barriers, and job searching barriers form three major barriers to spatial mismatch: (1) In the context of suburbanization and urban spatial reconstruction, the lack of residential mobility makes it spatially difficult for ethnic minorities, such as Blacks, to move closer to jobs and increases their employment possibilities [24]; (2) The lack of cars and the inaccessibility of public transport in situations where residence is far from employment result in barriers to commuting [1]; (3) Weaker access to employment information and inefficient job searching behavior may exacerbate the employment vulnerability of the groups concerned in the absence of the separation of their residence and employment [25]. The current widespread urban sprawl, urban renewal in many developing country cities, such as the reconstruction of city centers, shantytown renovation, new town development, and the construction of affordable housing in suburbs, have shifted a large number of vulnerable groups to the urban periphery, inevitably leading to the spatial separation of vulnerable groups from the job-rich central areas. Meanwhile, the combination of barriers to migration caused by high property prices in central areas, barriers to commuting caused by poor transport facilities in the suburbs, and barriers to job search caused by a lack of access to employment information leads to spatial mismatch [17][26][27].
Therefore, the research which were originally presented to falsify the objective existence of spatial mismatch shown in Table 1 have turned out to help the expansion of spatial mismatch theory at last (Figure 1). Employment suburbanization and residential segregation bring about the physical manifestation of residence-employment spatial separation on one hand. On the other hand, a series of factors, such as race, transportation, employment skills, employment information, etc., may create residential immobility, commuting barriers, and job searching barriers to aggravate the dysconnectivity between residence and employment. In a word, spatial mismatch is a phenomenon that reflects the loss of employment welfare due to the spatial distance of residence from employment and the lack of connectivity between residence and employment. Spatial mismatch is caused by a combination of factors such as restricted residential migration, imbalanced public transport policies, lack of individual mobility, selective discrimination in the job market, and poor access to employment information, all of which are superimposed on the changing spatial structure of the city. Overall, research on the factors influencing spatial mismatch has evolved in two respects: firstly, from focusing on the factors influencing the distance of the relevant subject from employment (residential segregation) to the lack of connection between residence and employment (residential immobility, commuting barriers, job searching barriers); and secondly, by interconnecting and embedding these factors with space and understanding spatial mismatch from a broader perspective of spatial inequality, emphasizing the essential link between space and factors such as race, poverty, transport, and individual characteristics rather than separating them out and considering only spatial distance, so as to resolve the debate between spatial mismatch and racial mismatch, transportation mismatch, skills mismatch, information mismatch, etc.

3. Diversity in the Manifestation of Spatial Relations

Residential suburbanization is also an indirect way of reflecting the job accessibility [33][34]. The logic behind it is that inner-city Blacks are less accessible to job opportunities than suburban Blacks, and the lack of job opportunities can lead to higher unemployment, longer commuting distances, and lower wages. Earlier studies have examined spatial mismatch by comparing differences in employment participation, commuting, and wages between inner-city Blacks and suburban Blacks, but the findings vary considerably. This may be related to the simple city-suburban ring dichotomy: employment opportunities are unequal within the simple delineation of city-suburban areas, and the boundaries of city-suburban areas are constantly changing and blurring over time.

The degree of employment suburbanization is usually measured as a ratio of the number of jobs outside the inner city to the total number of jobs. The spatial mismatch can be tested by comparing the differences in the number of jobs in inner city and suburban areas and linking them to differences in the income status of Black in inner cities and suburbs [35]. However, some studies have suggested that discussing all job numbers in general would lead to bias, and that the proportion of certain jobs suitable for certain groups should be used, such as the proportion of manufacturing, retail, and service jobs suitable for Blacks [2]. It is important to notice that using this indicator is still subject to the simple city-suburban ring dichotomy and that wage earnings will vary according to the profitability, labor market supply and demand conditions of different zones, which need to be carefully excluded from the study.

While the first three indicators have their own use logic, they can only indirectly reflect job accessibility to characterize the spatial relationship between residence and employment. Some studies have suggested the need to directly measure job accessibility, i.e., to directly reflect the proximity of the employed population to job opportunities.

If the accessibility of jobs is low for a particular group, a longer commute is required for employment. While Ellwood argues that commute time is the best direct indicator of job accessibility, two contrasting conclusions have been reached by testing the relationship between commuting time and Black youth employment, with some studies that concluded no significant effect [28] and others that concluded that there was a significant effect [6][36]. The differences in empirical results may be related to sample selection bias, endogeneity of residential choices, and differences in commuting distances, commuting tools, and commuting nodes. Studies have also suggested that accessibility is a concept that involves physical, psychological, economic and social features, which makes the measurement of it invalid using traditionally place-based accessibility related to the costs needed to reach a destination [37]. Thus, explicit indicators, such as surface for vehicular traffic only, pedestrian accesses, percentage of accesses without architectural barriers, etc., are used to measure the commute-based accessibility directly [38][39].

(2)
Employment-based job accessibility, such as employment to residence ratio

Direct measures of job accessibility can also be made by directly reflecting the matching of potential employers of different geographical units with potential jobs in the vicinity, i.e., employment to residence ratio [40]. However, a range of methodological challenges may also affect the accurate measurement of job accessibility, including measurement bias issues using all jobs rather than vacant jobs, labor market segmentation issues using all jobs without distinguishing jobs suitable for low-skilled workers, including the failure to consider job market competition from residents of neighboring communities seeking jobs in their own community and from residents of their own community working in other communities, as well as the failure to consider issues such as distance decay effects due to the spatial mobility of employed people [41]. In this regard, some studies have created functions that express job vacancies, labor market segmentation, employment competition, and the degree of spatial obstruction between two locations in order to measure spatial accessibility of jobs more accurately [42][43][44][45]. The scale is also a key issue to be considered in the accessibility measurement, since the level of accessibility of cities or metropolitan differs greatly with that of regional, local, and individual [46]. Accessibility of 15-min neighborhood level is often used responding to the current urban restructuring that much more employment activities are supposed to be done in the 15-min neighborhood instead of in city scale. There is a higher accessibility if it guarantees an adequate supply of jobs and basic services within the 15-min neighborhood [47]. 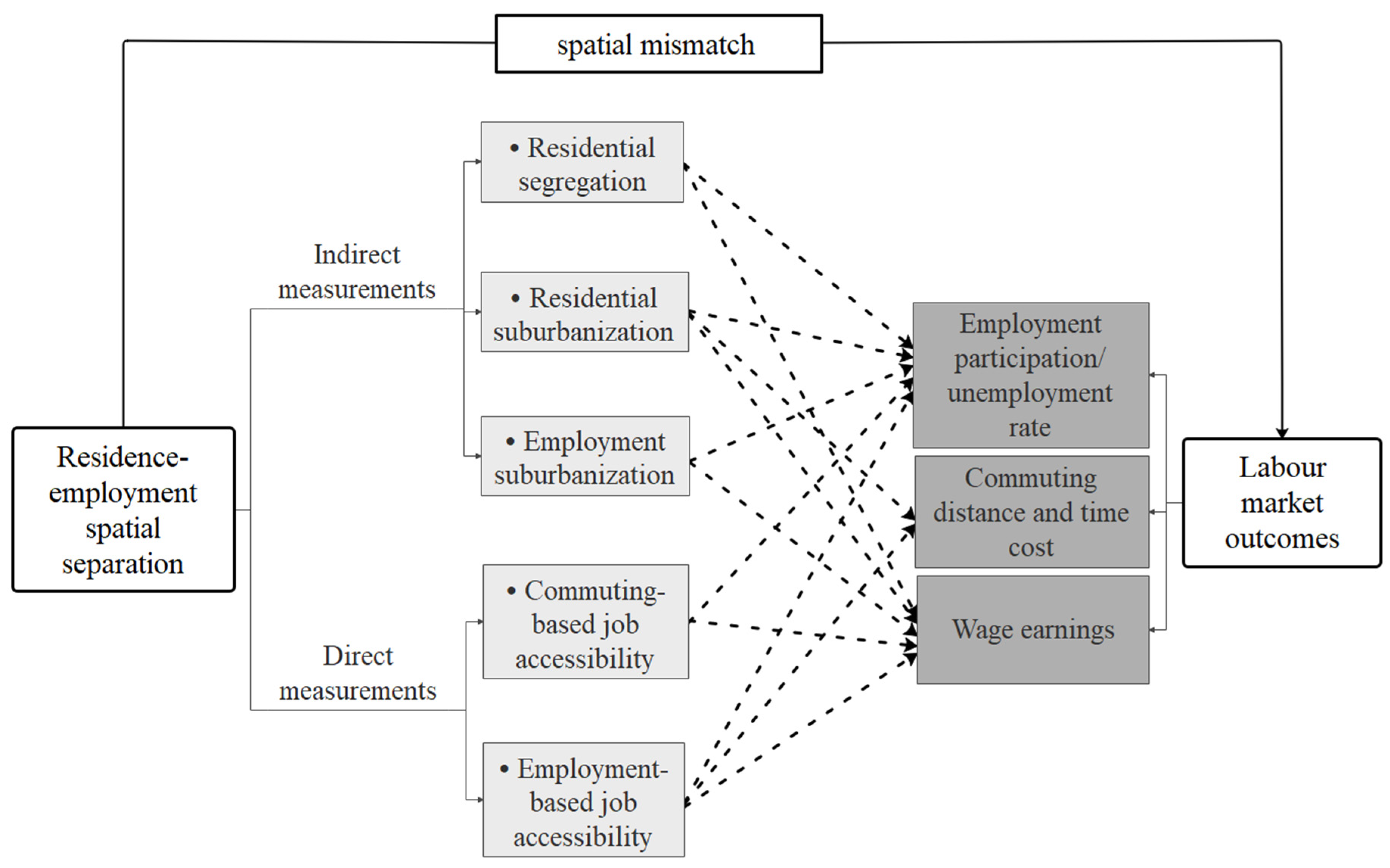 More
© Text is available under the terms and conditions of the Creative Commons Attribution (CC BY) license; additional terms may apply. By using this site, you agree to the Terms and Conditions and Privacy Policy.
Upload a video for this entry
Information
Subjects: Urban Studies
Contributors MDPI registered users' name will be linked to their SciProfiles pages. To register with us, please refer to https://encyclopedia.pub/register :
Liping Wang
,
Cifang Wu
,
Songnian Zhao
View Times: 107
Revisions: 2 times (View History)
Update Date: 28 Jul 2022
Table of Contents
1000/1000
Hot Most Recent