+1 point
Thank you for your contribution! You can also upload a video entry related to this topic through the link below: https://encyclopedia.pub/user/video_add?id=25563
Check Note
2000/2000
The Microbiota–Gut–Brain Axis

The commensal gut microbiome is an important regulator of the gut–brain axis and plays a critical role in brain physiology. Engaging microbiome-generated metabolites such as short-chain fatty acids, the immune system, the enteric nervous system, the endocrine system (including the HPA axis), tryptophan metabolism or the vagus nerve plays a crucial role in communication between the gut microbes and the brain. Humans are exposed to a wide range of pollutants in everyday life that impact our intestinal microbiota and manipulate the bidirectional communication between the gut and the brain, resulting in predisposition to psychiatric or neurological disorders.

The gut microbiome is made up of approximately 100 trillion miсroorgаnisms that collectively have almost 200 times more genes than the human genome, making it an “organ” in and of itself [1][2][3][4]. Bасteroidetes аnd Firmiсutes are the two main bacterial phyla that dominate the human intestine, accounting for 90% of intestinal bacteria in healthy people according to findings based on gene sequencing [5]. Proteobacteria, Actinobacteria, Verrucomicrobia and Fusobacteria, among others, make up the remaining 10% [5]. The gut microbiota distribution differs greatly between individuals and even changes throughout life. The co-evolution of human beings and their microbiota has emerged due to a symbiotic interplay and сo-deрendenсy for both species’ existence, ensuing in biomolecular networks between them [6][7]. Bacterial populations in this state are constantly changing, and they are vulnerable to changes in the host environment and body conditions. The inflammation and disruption of gut permeability appear to be caused by gut dysbiosis that, in turn, can have an impact on the host’s health [8]. Gut dysbiosis caused by environmental pollutants leads to alterations in the GBA, which is linked to the onset or exacerbation of psychiatric disorders [9].
Mental health is very important at all stages of life, from childhood through adolescence to adulthood, and impacts how a person behaves, feels and thinks [10]. According to the World Health Organization (WHO), mental health and drug addiction disorders have increased by 13 percent in the last decade (to 2017), owing primarily to demographic shifts [11]. Approximately 450 million people worldwide suffer from some type of psychiatric disorder that accounts for the loss of around one-third of the disability-free-life years [12]. Currently, mental ailments are a prominent cause of disability and morbidity worldwide [13]. Depression, anxiety, phobias, bipolar disorder, schizophrenia and other psychoses, dementia, and developmental disorders such as autism and post-traumatic stress disorder are all mental disorders with their own set of symptoms. A combination of aberrant thoughts, perceptions, emotions, behavior and interpersonal relationships characterize these disorders [14].
Many variables can increase the chance of having a mental disease, but most of them are caused by a combination of environmental, psychological and biological factors. Genetics, brain injury, microbial infection, substance abuse, poor nutrition or exposure to environmental pollutants all may play an important role in the development of mental disorders [15].

The bidireсtionаl сommuniсаtion between the enteric nervous system (ENS) and the central nervous system (CNS), linking peripheral digestive activities to the brain’s emotional, behavioral and cognitive centers constitutes the gut–brain axis (GBA) [16]. Much of the early investigations on gut–brain communication concentrated on digestive function [17][18], but more recent studies have focused on the higher-order psychological and intellectual effects of brain–gut and gut–brain communication [19][20][21].
The microbiota has been the focus of research in recent years to discover a missing link between mental health and gut dysbiosis. More than 98% of bacteria in the human gut come from four phyla, viz. Bacteroides, Firmicutes, Proteobacteria and Actinobacteria, making up the microbiome’s remarkable complexity and diversity. The human gut microbiome may comprise more than 1000 bacterial species, containing more than nine million genes, according to metagenomic studies [22]. The presence of a microbiota–gut–brain axis (MGBA) is indicated by the fact that changes in the composition and amount of gut microbes via diet, host-derived metabolites and different environmental contaminants, can affect both the CNS and the ENS [16][23]. The engagement between microbiota and the CNS is principally mediated by the neurological (ANS), hormonal (HPA axis) and immunological (cytokine and chemokine) pathways, which are all linked [20]. Gut microbiome dysbiosis caused by exposure to environmental pollutants may be a direct factor that affects the GBA’s normal functioning and contributes to mental health issues such as depression, anxiety and mood disorders [24] (Figure 1). 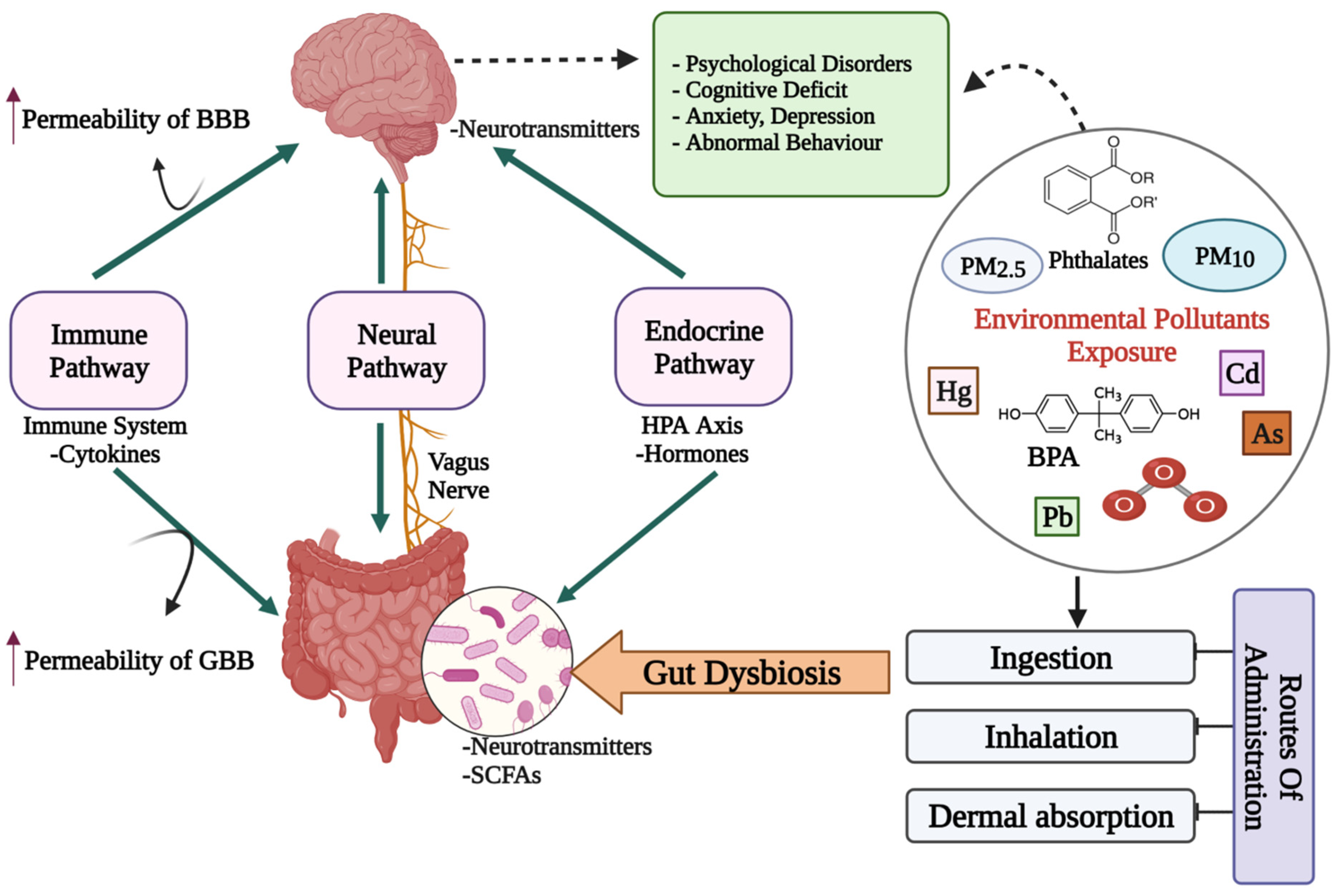 Crosstalk between Microbiota, Gut and Brain

Although the precise processes underlying microbiota–gut–brain crosstalk are as yet unknown, there are several potential mechanisms through which the gut bacteria can alter brain function. Microbes can influence CNS processes bidirectionally via the vagus nerve [25]; through immune system modulation [26]; regulating the activity of the HPA axis, including the plasma level of glucocorticoids [27][28]; tryptophan metabolism [29]; production, expression and turnover of neurotransmitters and neurotrophic factors [30][31][32]; and production of metabolites with neuroactive properties, such as short-chain fatty acids (SCFAs) [31][33][34][35][36]. The gut microbiota imbalance has been proven in animal studies to affect brain chemistry, metabolic status and neuronal function [23]. SCFAs can cross the blood–brain barrier (BBB) via monocarboxylate transporters (MCTs) by overexpressing tight junction proteins and maintaining the integrity of the BBB [36]. SCFAs such as propionate, butyrate and acetate may modulate the levels of neurotrophic factors (BDNF), promote neurogenesis, influence glial cell morphology and function, contribute to serotonin formation and improve neuronal homeostasis and function, all of which help to regulate neuroinflammation in the CNS [36]. The engagement of SCFAs with these gut–brain networks can alter cognition, emotion and the pathophysiology of mental disorders directly or indirectly [36]. Changes in neurotransmitter activity via modulatory pathways including the kynurenine pathway [37], as well as changes in the availability and effects of SCFAs in the brain, can all have an impact on brain-derived neurotrophic factor (BDNF) functions including neuronal survival and differentiation in the CNS [37]. SCFAs also alter the release of gut hormones such as peptide tyrosine tyrosine (PYY), cholecystokinin (CCK) and glucagon-like peptide-1 (GLP-1) from gut mucosal enteroendocrine cells expressing free fatty асid receptors (FFАRs) [38]. In rodents, blood-borne PYY and GLP;-1 permeate the brain and have significant effects on neurotransmitters and behavior [39][40][41]. Daily exposure to the diverse variety of environmental pollutants affects our gut microbiota and impairs the bidirectional GBA and may lead to the development of psychiatric disorders [23]. Manipulation of the intestinal microbiota using prebiotics, probiotics or antimicrobial drugs is an effective therapeutic or preventative measure to counteract behavioral and cognitive deficits and these may be useful to supplement the action of drugs in the treatment of CNS disorders.