+1 point
Thank you for your contribution! You can also upload a video entry related to this topic through the link below: https://encyclopedia.pub/user/video_add?id=25544
Check Note
2000/2000
The Trauma of Perinatal Loss

Perinatal loss, the loss of a fetus or neonate between conception and 28 days after birth, is a worldwide phenomenon impacting millions of individuals annually. Whether due to miscarriage, stillbirth, life-limiting fetal diagnoses, or neonatal death, up to 60% of bereaved parents exhibit symptoms of depression, anxiety, and posttraumatic stress disorder.

1. Trauma of the Diagnosis

The first key milestone contributing to emotional trauma within the perinatal loss experience was learning of the non-viable nature of the pregnancy. Whether due to miscarriage, stillbirth, or a diagnosis of a life-limiting fetal condition (LLFC), parents recounted feeling intense emotions, being in a state of shock, and feeling as if the world had collapsed around them [1][2][3][4]. Both mothers and fathers spoke of the trauma of miscarriage and stated being horrified, angry, and confused [5]. Despite both men and women experiencing emotional trauma at the diagnosis of miscarriage or an LLFC, men rarely received emotional support from health care professionals or members of their social circle [1][3]. According to Chaves et al. (2019) one man stated, “It was the third or fourth miscarriage before someone at the hospital even thought to ask if I was okay” (p. 670).
Receiving a diagnosis of a life-limiting fetal condition was also emotionally traumatic for parents [1][6]. Parents described being in a state of shock, being blind-sided by the news, and being pushed to make life-altering decisions immediately upon diagnosis. Parents desired to make a decision they could live with [1][2] and felt especially emotionally traumatized when pressured to decide to continue or terminate the pregnancy at the diagnostic appointment [1]. Interactions with health care professionals heavily influenced the intensity of parents’ emotional trauma [1][7]. The terminology used throughout the diagnosis was important to parents. Health care professionals whose interactions were described as cold and clinically detached negatively impacted parents’ emotional state [1]. Health care professionals who were supportive, guided parents through the decision-making process, and discussed the potential consequences of each decision positively influences parents’ overall experience [2][8].

2. Trauma of the Delivery and Birth

Both men and women described labor and birth as an acute phase of trauma within the perinatal loss experience [1][2][3]. Parents who described a traumatic birth experience also described persistent posttraumatic stress disorder (PTSD) in the years following their loss [1]. Health care professionals played an important role in mitigating the emotional trauma of the birth experience [1][2][7]. Parents expressed wishes for a dedicated bereavement team, which they felt would have decreased the emotional trauma of their experience [2]. Health care professionals who facilitated memory making, showed kindness towards the deceased fetus or neonate, allowed unlimited visitors, and roomed parents away from expectant women and healthy neonates were described as extremely helpful [1][2][3].

3. Trauma of Interacting with Others

Fathers were expected to convey the news of perinatal loss to family, friends, and coworkers and described the task as a traumatic experience [1][2][3]. Reactions of those receiving the news also contributed to the emotional trauma. Fathers described receiving judgment or insensitive and hurtful comments from others [1][8]. Fathers also discussed the difficulty in being strong and comforting others as they shared the news as a time when they needed to be supported [1][2][3]. Many parents described relationships with friends and family as ending following insensitive or judgmental comments [1].
The trauma of interacting with others was further exacerbated by the expectations of society for parents to operate as if perinatal loss had not occurred [1][2]. Parents, particularly fathers, were expected to hide their grief and refrain from talking about their loss with others [1]. Parents’ social circles also expected parents’ grief to resolve with the completion of the pregnancy 4. Legal acknowledgment of the fetus or neonate via a birth certificate is issued based on gestational age at the time of loss. Miscarriages are often not legally recognized as the death of a “person”, which furthers the lack of social recognition of the loss [3]. The lack of social support which resulted in stigmatization, silence, and disenfranchised grief was found to be a predictor of PTSD [9].

Symptoms of trauma persisted for years following the perinatal loss experience [1][2][6][10][11]. Hypersensitivity, hyperreactivity, triggering events, and nightmares were disruptive to many parents’ lives [1]. The grief and trauma of the loss were embodied by participants, who felt chronically “stuck” in emptiness [12]. Parents described feeling alone and abandoned by both social and professional support systems following the “end” (i.e., delivery or birth of the fetus or neonate) of the perinatal loss experience [1][2]. The absence of social support and follow-up care required parents to actively seek help following their loss, which contributed to feelings of being alone and abandoned and often prevented parents from receiving the psychological support they needed [6][13][14].
Social support was a protective factor in the development of PTSD [9]. Within the realm of social support were ritual and ceremonial acknowledgments of the fetal or neonatal death. Parents’ grief was negatively impacted when they were not “allowed” or offered the opportunity to engage in cultural rituals surrounding their loss [12]. Subsequent pregnancies and twin pregnancies complicated parents’ preexisting grief and trauma following perinatal loss. Women who experienced a pregnancy subsequent to perinatal loss were especially vulnerable to developing PTSD [4]. Pregnancies after loss were wrought with depression, anxiety, and PTSD [2]. Societal expectations of a subsequent pregnancy to “fix” the grief of prior loss often prevented parents from receiving psychosocial support [1][2][6]. Similarly, the loss of a co-twin was described as a traumatic event with multiple unique and complex emotional stressors [1][11]. The coexistence of joy and heartbreak amidst caring for the surviving twin took a substantial biopsychosocial toll on both mothers and fathers. Parents reported needing to put their emotions on the back burner to care for the surviving twin, which consequently prolonged the emotional trauma of the loss experience [1][11]. Figure 1 illustrates the identified themes in the form of a timeline.
Disruption of core beliefs was a positive predictor for PTSD [11]. Parents described needing to relearn how to live in a world without their child, stating that the way the world worked no longer made sense [1][2][15]. Parents expressed their desire for professional help in learning how to reconstruct meaning in the years after their loss, stating they struggled to understand their new identity [1][2]. As parents relearned how to live in a new reality and find their new identity, they stated that maintaining relationships with their spouse or partner, living children, and social network was also challenging [1]. Parents’ perception of value evolved with the disruption of their core beliefs, lending to value conflicts within their social circle. Value conflicts, relationship strain, and lack of support exacerbated the emotional trauma parents were experiencing [1][5][13].
Positive outcomes amidst the trauma were reported in the literature. Some parents found solace in volunteering, and “altruism born of suffering” was found to foster posttraumatic growth [10]. When exploring the effects of therapeutic approaches to support women following perinatal loss, non-trauma-focused counseling was ineffective in providing the support women needed [15]. 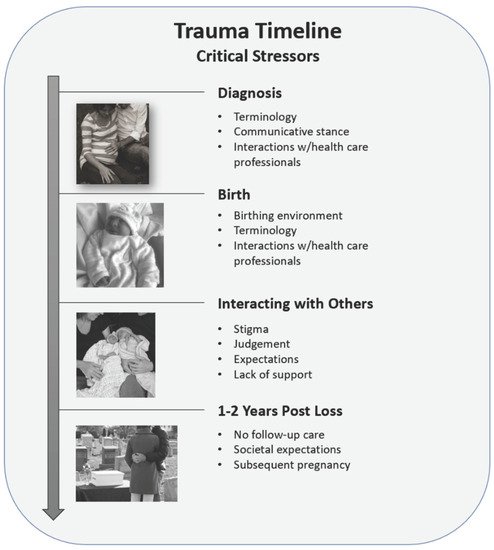 Pregnancies subsequent to perinatal loss are often wrought with anxiety and PTSD. Identifying pregnant persons with a history of gestational loss is necessary to recognize those who require additional psychological and emotional support throughout the pregnancy. Developing automated flagging systems in electronic health records may facilitate early identification and resource allocation to those with prior gestational loss. Providing early interventions and emotional support may decrease the anxiety and trauma of pregnancy subsequent to gestational loss.

More
© Text is available under the terms and conditions of the Creative Commons Attribution (CC BY) license; additional terms may apply. By using this site, you agree to the Terms and Conditions and Privacy Policy.
Upload a video for this entry
Information
Subjects: Nursing
Contributor MDPI registered users' name will be linked to their SciProfiles pages. To register with us, please refer to https://encyclopedia.pub/register :
Shandeigh N. Berry
View Times: 157
Revisions: 2 times (View History)
Update Date: 27 Jul 2022
Table of Contents
1000/1000
Hot Most Recent