Submitted Successfully!
Thank you for your contribution! You can also upload a video entry related to this topic through the link below:
https://encyclopedia.pub/user/video_add?id=24377
Check Note
2000/2000
Africa’s Agricultural Total Factor Productivity for Food Security
Edit
Upload a video
This entry is adapted from 10.3390/su14116411

Population growth, food shortages, and low levels of human development have been longstanding issues confronting many African countries. Agricultural productivity remains a critical goal for mitigating these challenges and ensuring overall economic development. Total factor productivity (TFP) is a crucial metric for determining a sector’s overall growth. However, due to a lack of comprehensive assessments of the trends and determinants of TFP growth in African agriculture, there are disagreements. Within the context of inclusive human development, the impact of agricultural productivity is frequently misrepresented in the current literature.

As Africa grapples with population growth, food shortages, and low levels of human development, agriculture remains a critical goal for addressing these issues and achieving overall economic development [1]. Improving agricultural total factor productivity (TFP) is critical to reducing food insecurity and poverty in Africa [2]. Many studies have found that agricultural growth has a greater positive impact in poor economies with low levels of human development than in developed economies [3]. For Africa’s food security, higher TFP growth is critical. Africa has a vast scope of agro-climatic conditions that allow it to grow a wide range of crops, including food and cash crops, as well as a diverse variety of livestock species. However, Africa’s agricultural sector is still dominated by smallholder farmers, with many relying on rain-fed agriculture, making the sector vulnerable to climatic changes and low productivity growth [4].
Food security is important because it is linked to health and wellbeing [5][6][7], and its impact on human capital is critical because hunger has a negative impact on people’s learning ability. Food security, according to the FAO, is defined as the availability, access, utilization, and stability of consumable food items at the individual and household levels. In economic terms, availability refers to the amount of food available in supply (food supply size), which is directly related to agricultural productivity. Given decades of low agricultural productivity growth around the world, food insecurity has a broader impact in most developing countries, particularly in Africa [8].
Despite the fact that Africa’s economic performance is heavily reliant on agricultural advances, little attention has been paid to conducting a comprehensive survey on the state of productivity growth and its determinants in the continent [9]. Consequently, opinions differ on TFP’s growth trends and its impact on Africa’s overall growth. Thus, the current literature on the state of African agriculture and its economic impact has more questions than answers, which makes many believe that agriculture’s role in Africa’s growth path should be rethought [10][11]. Apata, T.G. (2019) warned that if public policy mechanisms are not well-designed to meet the needs of the economy, they can have significant negative effects on the economy, with society bearing their consequences [12][13].
Hence, the need for careful consideration of the consequences of food insecurity on the continent has been raised in many scholarly works [1][2][11][14][15][16][17]. The Global Food Security Index (GFSI) measures food security in 113 countries, based on indicators of food affordability, availability, quality, safety, and natural resources and resilience. About 32 African countries were chosen based on the size of their population, and 16 of them were proven to be food insecure [18]. Although the definition of food insecurity is broad and extends beyond agricultural indicators, the solution to food insecurity in Africa is largely dependent on agricultural productivity growth [17][19][20].
On the other hand, the impact of agricultural productivity on economic growth and poverty reduction is frequently misrepresented in the context of inclusive human development. As a result of the lack of sufficient evidence to link agricultural TFP to human development, little is known about the sector’s overall contribution to inclusive growth in Africa [21]. In this context, this entry emphasizes the relevance of agricultural TFP growth as a measure of food security in Africa and tested the impact of productivity growth in agriculture on a contemporary measure of inclusive growth and development (HDI). The main goal was to demonstrate how increased productivity growth in agriculture is critical for food security and how this affects human development. The rationale was that, rather than focusing the impact of agriculture on poverty and GDP (as has been the case in the current literature) [22][23][24], the assessment of agricultural productivity growth should be aimed at enhancing food sustainability and human development. This research is justified because poverty and GDP growth are normally assessed by financial indicators. In contemporary growth theories, these indicators have become inadequate quantifiers of national growth and development.
Therefore, the human development index (HDI) has recently become the most widely used indicator of inclusive development because it includes socioeconomic indicators such as education and health, as well as financial indicators such as GNP [25]. The HDI is seen as a step toward a more precise and comprehensive measure of socioeconomic wellbeing. Human development, according to the HDI, leads to economic growth because more education, better health, and higher living standards make a country more productive, which leads to more inclusive economic growth [26]. Given that there is a wealth of evidence that agriculture is important for food security and income, it makes sense to update the analysis of how agriculture affects current economic development indicators such as the human development index (HDI).

Agriculture has advanced in lockstep with human progress. Hunting was one of the first attempts made by humans to ensure their survival and improve their standard of living. People’s desire to cultivate crops also resulted in settlements and trade links among various groups of people, allowing human societies and cultural orientations to evolve over time. As the human population grew, so did the size and complexity of these settlements and trade systems [27]. According to archeologists, farming became the primary means of subsistence for humans around 10,000 years ago and remained so until the seventeenth-century industrial revolution. The development of agriculture has been studied by both historians and agricultural economists (New World Encyclopedia contributors, 2020).
Empirical studies about this link, however, have mostly focused on how income from agricultural development contributes to economic growth and reduces poverty [28][29][30][31]. Moreover, the majority of these studies have employed partial measures of productivity growth such as labor, capital investment, and land use analyses. Additionally, these analyses have focused on partial indicators of human growth, such as education and health. Hence, little is known about the empirical link between the aggregate measure of productivity growth in agriculture (TFP) and inclusive human development (HDI).
Recently, Self and Grabowski [32] attempted to close this gap by testing the impact of agricultural technology on human development using per capita GDP and the 20-year average HDI scores; they discovered that agricultural technology had a causal relationship with wellbeing and economic growth. Similarly, Ahao, A.O. et al. [33], investigated the impact of agricultural productivity on the HDI, as a measure of poverty, using the OLS method. According to the researchers’ findings, a unit increase in agricultural productivity growth reduced poverty by 0.69 percentage points. In addition, they employed the Malmquist productivity index on a panel of 42 developing countries for 39 years. They came to the conclusion that a 1 percent increase in technological advancement would have a 1.3 percent impact on human development. Lindner and Wagner [34] used the least squares dummy variable method on 29 years of data in 27 sub-Saharan African countries (SSA). They reported a significant but minimum impact of agricultural productivity on human development.
It is clear from the foregoing discussion that empirical evidence demonstrating a direct link between agricultural productivity growth and human development is lacking in the current literature. Therefore, the research attempted to fill this gap by assessing the impact of TFP growth on human advancement in Africa as a food security metric. The research is based on the UN’s concept of human development (HDI) and the FAO’s definition of food security (FS). As a result, the researchers provide new perspectives by departing from the current literature, which focuses on the impact of agriculture on poverty and GDP growth, and incorporating more recent growth and development indicators, such as the HDI.

3. An Overview of the Human Development Index (HDI)

In the 1990s, the late Pakistani economist Mahbub-ul-Haq collaborated with the Indian professor Amartya Sen to develop the concept of human development (HDI). The HDI can be used in place of traditional measures of human achievement. Since the 1990s, many researchers have used the human development index (HDI) to measure human progress [35][36][37]. Human progress can be measured in three ways, according to the United Nations Development Program (UNDP) [26][38]: increased education; increased life expectancy; and increased access to a decent standard of living. Progress in these dimensions is used as a measure of a country’s development in the annual reports of the United Nations Development Program (UNDP). The HDI divides countries into four categories: extremely high, high, medium, and low [39]. The main argument of the HDI concept has been to challenge the historical national accounting notion of real GDP per capita as an insufficient indicator of living standards. Poverty is defined solely as a lack of income as a result of this mindset.
The HDI, on the other hand, has been criticized as being redundant and highly correlated with GDP per capita [40][41][42]. Although some researchers have questioned this claim and supported the HDI’s linear association between variables [41][42], the UNDP has modified variables used in the HDI metrics to address critics’ concerns. For example, the standard of living variable, GDP per capita, has been replaced by per capita GNI (gross national income); for education, mean years of schooling and expected years of schooling have replaced the literacy rate variable; and for health, life expectancy has been retained (see Figure 1 for the HDI construct). Data for all variables are freely available and can be downloaded directly from the UNDP’s official databases. Therefore, the research used HDI scores calculated by the UNDP from their official databases. According to the data (HDI scores), many countries in Africa have seen a small but steady rise in the level of human development (2002–2019). 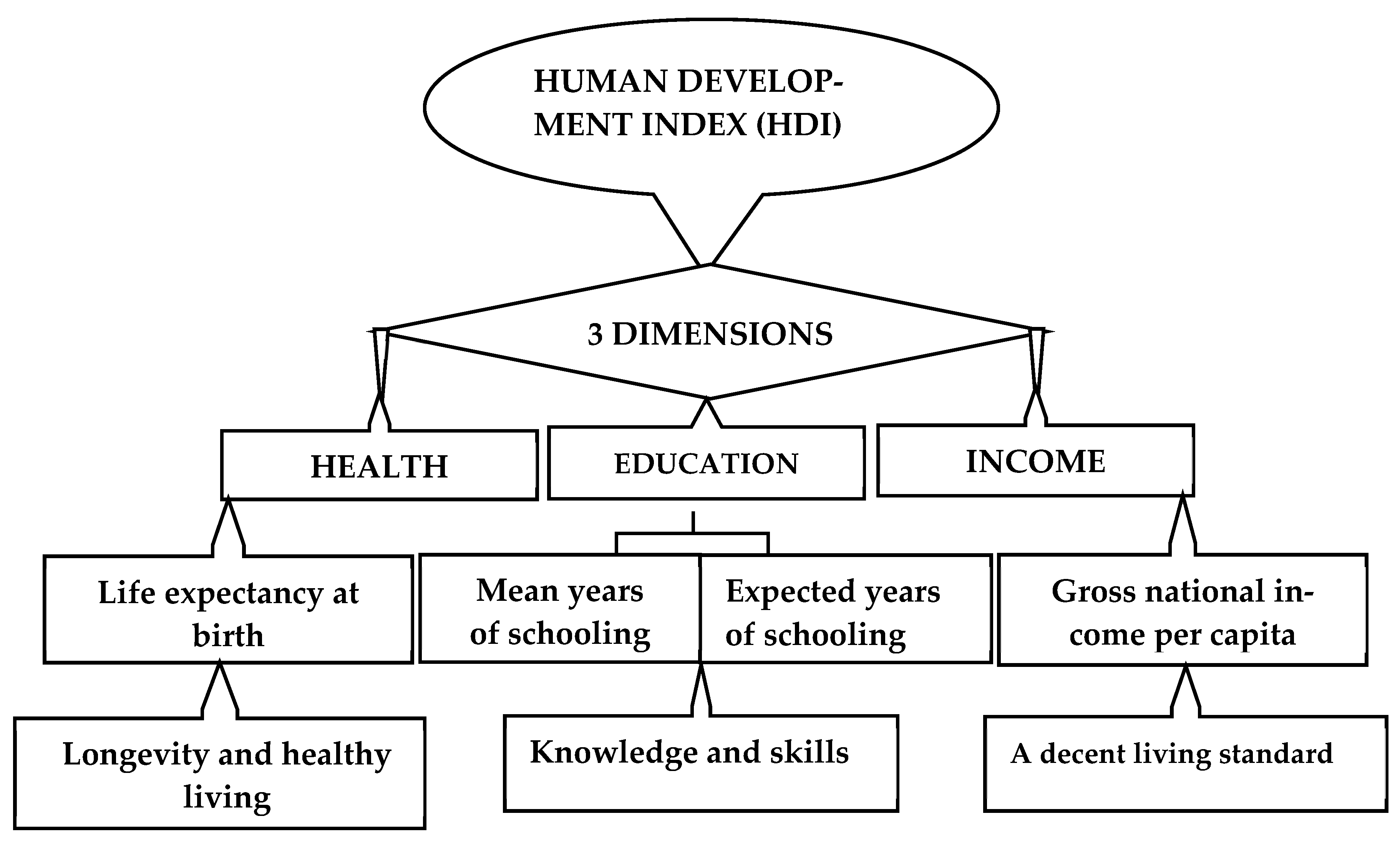