Submitted Successfully!
Thank you for your contribution! You can also upload a video entry related to this topic through the link below:
https://encyclopedia.pub/user/video_add?id=24173
Check Note
2000/2000
The Vascular Microenvironment in Glioblastoma
Edit
Upload a video
This entry is adapted from 10.3390/biomedicines10061285

Glioblastoma multiforme, the deadliest primary brain tumor, is characterized by an excessive and aberrant neovascularization. The initial expectations raised by anti-angiogenic drugs were soon tempered due to their limited efficacy in improving the overall survival. Intrinsic resistance and escape mechanisms against anti-VEGF therapies evidenced that tumor angiogenesis is an intricate multifaceted phenomenon and that vessels not only support the tumor but exert indispensable interactions for resistance and spreading.

Glioblastoma multiforme, the most common and the deadliest primary brain tumor, is characterized by its high vascularization and by the overexpression of proangiogenic factors as it is one of the most vessel-rich tumors [1][2]. The standard of treatment has remained unchanged for more than two decades [3], meanwhile survival is still very limited [4]. The initial excitement brought by the introduction of anti-angiogenic drugs within the therapeutic armamentarium was soon mitigated due to their poor efficacy in improving overall survival [5]. Those initial treatment regimens were meant to target a specific pathway in the neovascularization process, yet the tumor somehow managed to escape this aggression and even became more aggressive [6][7][8]. Since then, researchers' knowledge about the tumor microenvironment (TME) composition and behavior has evolved substantially, making it clear that multitarget therapies are crucial in confronting such a heterogeneous and dynamic entity [9].

The glioblastoma microenvironment is composed of the noncancerous cells, the extracellular matrix, and the biomolecules residing inside the tumor, all of which establish complex interactions with the tumor cells and modulate genetic and epigenetic expression. In this landscape, a remarkable type of cells resides, the glioblastoma stem cells (GSCs) [10], a subpopulation which is capable of self-renewal and pluripotent differentiation and is responsible for invasion, chemo/radio resistance, and relapse [11][12][13]. Three habitats have been described for these cells, each one determining different environment-driven behaviors (Figure 1). 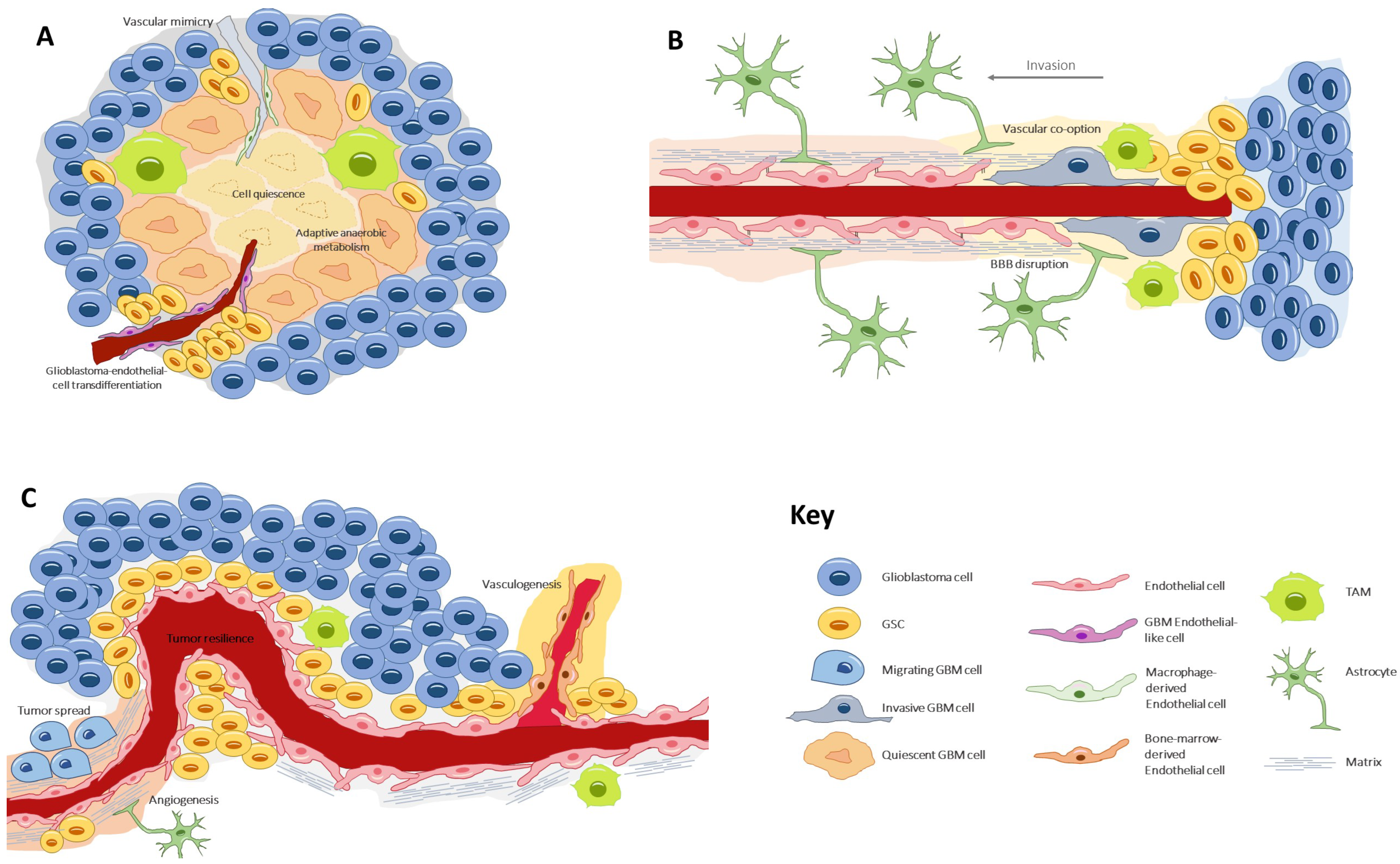 The niche concept in malignant gliomas was originally conceived to describe the sites where GSCs reside within the tumor bulk and where the TME exerts its maximal influence [28].
Notably, the perivascular niche is not a homogeneous construction. The glioblastoma intratumoral diversity accounts for a variety of microvascular patterns, as first described by Birner et al. [29]. Four types of microvessel conformations mold the interaction between glioma cells, endothelial cells, pericytes, astrocytes, and macrophages, an interaction that influences the genetic expression and tumor behavior and ultimately determines the clinical outcomes. Birner’s classical patterns, revisited by Chen et al. [30], include the following:

Microvascular sprouting comprises capillary vessels with a healthy appearance, similar to those seen in physiological angiogenesis. This classical vascular pattern is associated with better survival rates.

Vascular clusters are aggregations of more than two vessels, without connective stroma between them.

The vascular garland is a circular or spiral arrangement of intertwined aberrant vessels, frequently distributed around the necrotic core.

The glomeruloid vascular arrangement comprises a cluster of more than two vessels encased by connective stroma, resembling a glomerular structure.
The vascular garland and the glomeruloid proliferation are bizarre vascular patterns, associated with high proliferative tumors, in which cell growth seems to outpace neovascularization. Notably, in both of these vessel patterns, the cell bundles co-express alpha-Smooth Muscle Actin (α-SMA) or Nestin, which suggests that the pericytes belong to the transdifferentiation of GSCs [31]. All in all, it could be argued that glioblastomas with orderly vascular patterns are less aggressive and rely mostly on classic angiogenic processes; thereupon, they are likely to profit more from anti-angiogenic therapy than their cluttered counterparts, in which fast growth and necrosis promotes unconventional VEGF-independent neovascularization [29].
In addition to the vascular organization pattern, another appealing subdivision of tumor vasculature distinguishes between tumor-associated and tumor-derived vessel populations [32]. In a murine immune-competent model, the tumor-derived vessels were composed of two distinct endothelial subpopulations, exhibiting either a pro-vascular enriched profile or a pro-inflammatory lymphatic signature. This distinct molecular signature in tumor vessels might depict emerging immune phenotypes and explain the interactions between endothelium and tumor-associated macrophages, including immunosuppressive responses. Of note, both the tumor-associated and the tumor-derived vessel seemed different to the healthy endothelium, encouraging the idea of selectively targeting tumor vessels, while sparing normal endothelium [32].

Healthy brain vessels egress as a consequence of tumor invasion and neovascularization. Initially, normal vessels are well conformed in the so-called neurovascular unit. Here, endothelial cells are strongly entwined by tight junctions and attached to the extracellular matrix; upon the matrix, a sheath of abundant pericytes surrounds the basal lamina; the outer coverage is composed of astrocytic end-feet [33]. This cytoarchitecture corresponds to the blood-brain barrier (BBB), an extremely selective multilayered membrane that controls blood–brain product exchange.
However, as the tumor grows and vascularizes, the vessels become disorganized, dilated, and tortuous [34][35]; the BBB increases its permeability and promotes interstitial edema and immune cell invasion [36].
Traditionally, the formation of new vessels within the tumor was denoted as the sole process of angiogenesis. In recent years, several other processes have been unveiled [37], which either coexist or precede angiogenesis, and which occur at different stages of tumor development in response to specific environmental needs (Figure 2). 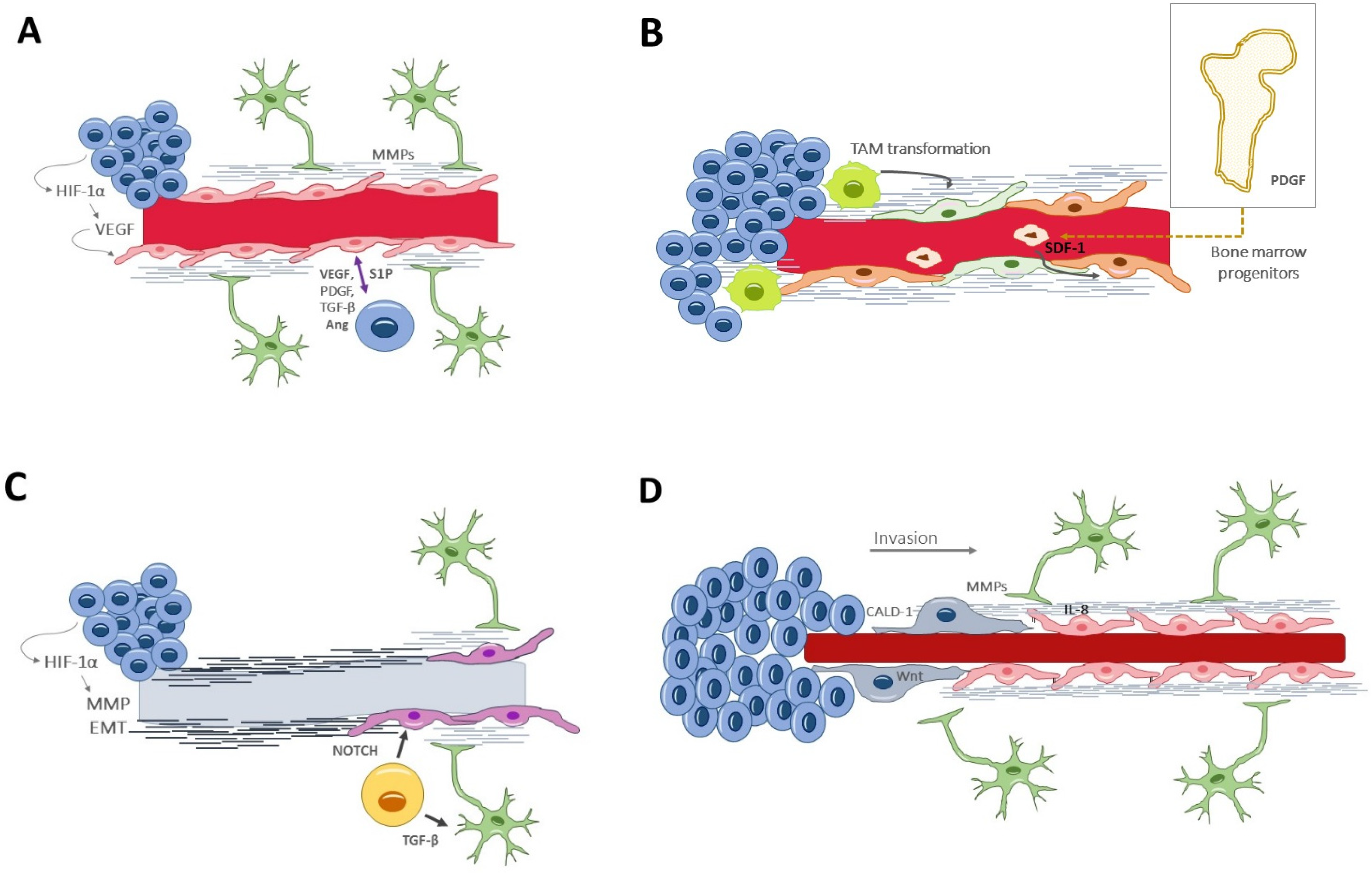 Angiogenesis [38] is the formation of new vessels from pre-existing ones; it occurs in both physiological and pathological conditions, and it is governed by an equilibrium of proangiogenic and inhibiting factors. In glioblastoma, angiogenesis seems to appear in a late stage of tumor development and within the necrotic niche. When the excessive tumor growth surpasses the vessels’ capacity to supply the metabolic demands, hypoxia acts as a potent angiogenic trigger via the HIF-1α, which induces the transcription of VEGF [39]. Angiogenesis begins with the dissolution of the extracellular matrix and the endothelial attachments, thanks to the secretion of metalloproteinases by the endothelial cells and pericytes [20]. This proteolytic degradation is followed by endothelial cell remodeling and specialization into tip and stalk types, determined by a finely synchronized interaction between Delta-like 4/NOTCH and VEGF/VEFGR2 signaling ways [40]. The process ends by recruiting pericytes that constitute the capillary sheath and by secreting basal membrane components, all of which is induced by platelet-derived growth factor receptor and angiopoietin Tie-2 receptor [41]. (Figure 2A).

Vasculogenesis is yet another mechanism of new vessel formation, relying on bone marrow-derived endothelial progenitor cells [42][43]. This process of recruiting circulating cells into neoformed vessels happens in the late stages of tumor evolution (Figure 2B). Additionally, tumor-associated macrophages could also differentiate into endothelial cells for neovascularization purposes [44].

Vascular mimicry consists of the neoformation of vessel-resembling structures that lack endothelial cells. Their appearance is similar to capillaries, with a tubular wall of matrix components and a lumen where fluids and blood cells circulate [45]. This alternative mechanism of vascularization is seen in advanced and aggressive gliomas, in areas under severe hypoxia [46]. In fact, HIF-1α promotes the expression of several molecules directly implicated in the mimicry, including VEGF, matrix metalloproteinases (MMPs), TGF-β, and epithelial–mesenchymal transition factor (EMT) [47]. Liu et al. demonstrated the clinical relevance of vascular mimicry, correlating it with higher tumor grades and shorter overall survival times [48] (Figure 2C).

The pluripotency of GSCs can overcome the lack of endothelial cells or circulating progenitors by direct transdifferentiation into endothelial-like cells [49]. This mechanism is complementary to the vascular mimicry and may provide a pseudoendothelial coverage to the otherwise acellular tubular structures. Again, hypoxia is the main driver for transdifferentiation, in a way that does not involucrate VEGF but, rather, the NOTCH signaling path [50] (Figure 2C), a highly conserved transmembrane plasma receptor that mediates cell–cell communication during myogenic progression and self-renewal.

Vascular co-option [51][52][53] is an angiogenic-related phenomenon by which the tumor cells make use of already existing vessels and which does not imply the formation of new ones. It is actually a process of tumor invasion, alternative to the white matter spread, by which glioma cells travel along the basolateral surface of the vessels and ultimately incorporate these healthy vessels into the tumor. Thus, this process happens in the invasive front and in the early oncologic phase and is VEGF-independent [54][55]. Importantly, this infiltrative process requires astrocyte displacement, contributing to vessel disarrangement and BBB leakage [56]. Specific tumor–endothelium interactions are needed, which will be discussed later in the text (Figure 2D).
Vessel co-option has been proposed as an intrinsic or acquired resistance mechanism to anti-angiogenic therapy [57]. Actually, the oligodendroglial phenotype is critical to providing the cellular context for promoting either Wnt7 activity and co-option or VEGF and angiogenesis. OPCs act in cooperation with reactive astrocytes, which are a source of pro-angiogenics such as angiopoietins 1 (Ang-1) and 2 (Ang-2) and VEGF [28].
Oligodendrocyte precursors (OPCs), expressing oligodendrocyte transcription factor 2 (Olig2), can serve as tumor progenitors in glioblastoma and may be actively involved in white matter vascularization [58]. In OPCs, hypoxia induces autocrine activation of the Wnt7 signaling pathway, which results in endothelial proliferation and extensive OPC migration along the vasculature [59][60]. This process, which is physiologic during the embryological development, may recapitulate in adults by the influence of the TME. The use of transgenic lines that differentiate among glial populations showed divergences between Olig2+ OPCs and Olig2− cells conducts. Olig2+ OPC cells utilize vascular networks as a pathway to move over time, and this OPC–vascular relationship is mediated by Wnt7 signaling, essential for brain angiogenesis. Conversely, Olig2− cells (expressing glial fibrillary acidic protein, GFAP+) tend to associate along the vascular walls and are required for normal vessel development. In fact, the ablation of GFAP+ cells causes irregular vessel development and a reduction in vascular endothelial growth factor (VEGF) expression [61]. Recently, it has been described that OPC-like (OPCL) cells in glioma express Wnt7 and invade the brain via single-cell vessel co-option [62]. In a practical sense, the gene targeting of Wnt7a/7b or the pharmacological inhibition of Wnt in experimental models, prevented vessel contact of OPCL with glioma cells. In contrast, Olig2− cells show a collective perivascular migration and enhanced VEGF signaling that increased and distorted the tumor vasculature and caused BBB leakage, leading to microglial activation and macrophage infiltration.
Although the former correlation has not been conducted to date, it might be sensible to assume that angiogenesis and vascular co-option occur in the early stages or in the moderately aggressive glioblastoma types or regions, where the perivascular niche is set around a vessel with microvascular sprouting or vascular cluster conformation. In contrast, highly proliferative tumors or exceptionally necrotic areas rely on vascular mimicry and transdifferentiation, leading to a clustered vascular pattern with garland or glomeruloid conformation.
A decisive repercussion of aberrant neovascularization is the alteration of the BBB. Hyperpermeability leads to interstitial edema and extravasation of plasma proteins and immune components [35]. Besides, the increase in interstitial pressure alters the blood flow and restricts oxygenation and leukocyte recruitment. Ischemia, in turn, leads to HIF-1α secretion and results in new vessel formation [39], thereby constituting a deleterious vicious circle.

More
© Text is available under the terms and conditions of the Creative Commons Attribution (CC BY) license; additional terms may apply. By using this site, you agree to the Terms and Conditions and Privacy Policy.
Upload a video for this entry
Information
Subjects: Oncology
Contributors MDPI registered users' name will be linked to their SciProfiles pages. To register with us, please refer to https://encyclopedia.pub/register :
Alejandra Mosteiro
,
Leire Pedrosa
,
Abel Ferrés
,
Angels Sierra
View Times: 125
Revisions: 2 times (View History)
Update Time: 20 Jun 2022
Table of Contents
1000/1000
Hot Most Recent