Submitted Successfully!
Thank you for your contribution! You can also upload a video entry related to this topic through the link below:
https://encyclopedia.pub/user/video_add?id=2376
Check Note
2000/2000
HERC Ubiquitin Ligases in Cancer
Edit
Upload a video
This entry is adapted from 10.3390/cancers12061653

HERC proteins are ubiquitin E3 ligases of the HECT family. The HERC subfamily is composed of six members classified by size into large (HERC1 and HERC2) and small (HERC3–HERC6). HERC family ubiquitin ligases regulate important cellular processes, such as neurodevelopment, DNA damage response, cell proliferation, cell migration, and immune responses. Accumulating evidence also shows that this family plays critical roles in cancer. In this review, we provide an integrated view of the role of these ligases in cancer, highlighting their bivalent functions as either oncogenes or tumor suppressors, depending on the tumor type.

Ubiquitin E3 ligases take part in protein ubiquitylation. These enzymes catalyze the last step of a cascade where ubiquitin is initially incorporated to a ubiquitin-activating enzyme (E1), which in turn is transferred to a ubiquitin-conjugating enzyme (E2), and finally, to a target protein through a process defined by a ubiquitin E3 ligase that interacts with the substrate protein (Figure 1). The ubiquitin-like proteins SUMO, NEDD8, and ISG15 are also covalently attached to the target protein via an E1/E2/E3 cascade. Specifically, the E3 ligases can be classified into three groups, of which one is homologous to the E6AP carboxyl terminus (HECT) protein. All HECT ligases have a catalytic domain in their carboxyl terminus that contains a conserved cysteine residue that is involved in forming a transiently thioester bond to ubiquitin before transferring it to the lysine residue of the substrate protein (Figure 1) [1]. HECT ligases containing one or more regulator of chromosome condensation 1 (RCC1)-like domains in their amino-terminal domain form a HERC subgroup [2]. HERC1 and HERC2 are the largest HECT ligases, having molecular weights exceeding 500 kDa, and constitute the large HERC protein subfamily [3]. By contrast, HERC3 to HERC6 have molecular weights around 100–120 kDa and constitute the small HERC protein subfamily. Despite the structural similarity between large and small HERC proteins (Figure 1), they are evolutionarily very distant. In fact, they are the result of convergence phenomena rather than being phylogenetic paralogs [3][4][5]. Moreover, the small HERC proteins HERC5 and HERC6 may also function as ISG15 E3 ligases [6][7]. 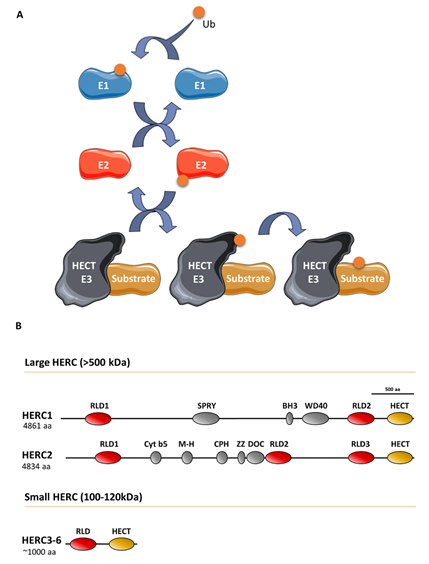 Figure 1. The ubiquitin-conjugating system in HERC E3 ligases: (A) Ubiquitin (Ub) is conjugated to a target substrate via a cascade that comprises an E1 activating enzyme, an E2 conjugating enzyme, and an E3 ligase enzyme. The HERC proteins belong to the HECT family of E3 ligases, which form a thioester bond with Ub via a conserved cysteine residue. Once formed, Ub is transferred to the substrate’s lysine residue (see text for details). Ub-like proteins, such as ISG15, are also covalently attached to the substrate protein via an E1/E2/E3 cascade; (B) structural features of large and small HERC proteins are also shown. HERC5 and HERC6 may also function as ISG15 E3 ligases.

2. The Role of HERCs in Cancer

HERCs play roles in a wide range of cellular functions, including neurodevelopment, cell response to replication stress and DNA damage, cell proliferation, cell migration, and immune responses. As such, mutations in HERCs are associated with severe pathologies [8], with a notable impact in cancer. An extensive list of the different cancers associated with the specific large and small HERCs is provided in Table 1.

Mutations in large HERCs have been found in leukemia  and breast cancer . Frameshift mutations in HERC2 have been found in both gastric and colorectal carcinomas with microsatellite instability. The HERC2 locus has also been associated with both cutaneous melanoma and uveal melanoma, whereas the HERC1 locus has been found to be mutated in non-melanoma skin cancer. Higher expression levels of HERCs are associated with better patient prognosis in kidney, head and neck, and pancreatic cancers when HERC1 expression levels are elevated, and in patients with renal cancer when HERC2 expression levels are elevated [50]. By contrast, the expression levels of HERC2 have been found to negatively correlate with patient survival in non-small-cell lung cancer . In osteosarcoma, upregulation of the HERC2-binding protein SOX18 enhances cell proliferation, and it correlates with a reduction in both large and small HERC mRNA levels (Table 1) .

More
© Text is available under the terms and conditions of the Creative Commons Attribution (CC BY) license; additional terms may apply. By using this site, you agree to the Terms and Conditions and Privacy Policy.
Upload a video for this entry
Information
Subjects: Oncology
Contributor MDPI registered users' name will be linked to their SciProfiles pages. To register with us, please refer to https://encyclopedia.pub/register :
Jose Luis Rosa
View Times: 234
Revisions: 3 times (View History)
Update Time: 21 Oct 2020
Table of Contents
1000/1000
Hot Most Recent