+1 point
Thank you for your contribution! You can also upload a video entry related to this topic through the link below: https://encyclopedia.pub/user/video_add?id=23566
Check Note
2000/2000
Respiratory Epithelial Cells against Fungal Infections

The respiratory epithelium is highly complex, and its composition varies along the conducting airways and alveoli. In addition to their primary function in maintaining the respiratory barrier and lung homeostasis for gas exchange, epithelial cells interact with inhaled pathogens, which can manipulate cell signaling pathways, promoting adhesion to these cells or hosting tissue invasion. Moreover, pathogens (or their products) can induce the secretion of chemokines and cytokines by epithelial cells, and in this way, these host cells communicate with the immune system, modulating host defenses and inflammatory outcomes.

As we breathe, several microorganisms and other stimuli enter our respiratory system and make the primary contact with the epithelium, which acts not only as a physical barrier but also as an important key for the host’s immune defense. The functional differences and the cell complexity of the epithelia can be verified along the upper respiratory tract (nasal cavity, pharynx, and larynx), through the conducting airways (trachea, bronchi, and bronchioles) and to the alveoli [1][2][3]. Through cell–cell communication, including with immune cells, epithelial cells are essential for respiratory system homeostasis. If the regulatory mechanisms are in disequilibrium, a disease state may be triggered in the individual [2].
Histology of the airway epithelium varies according to the region of the respiratory tract. Most of this epithelium is pseudostratified and composed of (i) basal cells, which can renew the epithelium and differentiate into other cell types; (ii) club cells that also have epithelial renewal properties and secrete an important anti-inflammatory protein called uteroglobin; (iii) ciliated cells, which beat their cilia and play an essential role in expelling microorganisms and other foreign particles; (iv) goblet cells, which produce mucus and act with ciliated cells to assist airway clearance; and (v) pulmonary neuroendocrine cells, which are rare cells that secrete neuropeptides, promoting nervous and immune responses (see ref. [2] for review). Tuft cells, pulmonary ionocytes, hillock cells, and microfold cells were also identified in the airways, but the precise functions of these cells in the respiratory system require further study [2]. In contrast, the alveolar epithelium consists mostly of types I and II alveolar epithelial cells (also known as pneumocytes). The type I alveolar epithelial cell is a large and very thin cell, and its primary function is gas exchange. The type II cell has a cuboidal shape and secretory functions, such as surfactant production [3][4].
In addition to forming a physical barrier, lung epithelial cells function as sensors in the respiratory tract, interacting and responding to microorganisms and other particles. Stable lung homeostasis is also maintained by interactions with a sparse and diverse microbiome, but when dysbiosis occurs, lung diseases may develop. Lung microbiome disruption is associated with the progression of chronic obstructive pulmonary disease, cystic fibrosis, and idiopathic pulmonary fibrosis [5][6][7].
Pathogenic bacteria, viruses, or fungi also interact with lung epithelial cells and may exploit host cell receptors, leading to a better cell adhesion (and frequent invasion), establishing an infection in the host. In the context of the host immunological response, epithelial cells present on their surfaces pattern recognition receptors (PRRs) that recognize pathogen-associated molecular patterns (PAMPs) in microorganisms, triggering the release of chemokines and cytokines that modulate the immune response [3]. In fungi, mannans or glucans are examples of PAMPs that are recognized by PRRs such as toll-like receptors (TLRs) and dectins [8].
According to The Global Action For Fungal Infections (GAFFI), 2 million people die of fungal diseases every year [9]. Some of these fungi can cause endemic or opportunistic respiratory mycoses, which can result from the inhalation of fungal spores, reactivation of latent fungi, or hematological dissemination. Endemic fungi are usually found in specific regions of the world, and they are thermally dimorphic, i.e., these fungi exhibit a mycelial form in the environment and a yeast form within the host. While endemic fungi may promote disease in healthy individuals, most opportunistic cases occur in immunocompromised people [10][11].

Lung diseases caused by Aspergillus affect more than 10 million people, resulting in approximately 200,000 deaths annually [12]. This fungus causes a complex variety of diseases that have different pathogenic mechanisms and clinical manifestations, and are associated with patients who exhibit distinct immune responses [13]. Latgé and Chamilos [13] described three major groups of aspergillosis syndromes: (i) hypersensitivity-allergy, which includes severe asthma with fungal sensitization and allergic bronchial pulmonary aspergillosis; (ii) structural disease, including aspergilloma, chronic pulmonary aspergillosis, and semi-invasive forms; and (iii) severe immunodeficiency, which contains invasive pulmonary aspergillosis, invasive bronchial aspergillosis, and central nervous system aspergillosis (extrapulmonary).
Recently, the incidence of COVID-19-associated pulmonary aspergillosis in intensive care units was indicated to be approximately 10% to 15% [14]. This coinfection raises concerns about the high mortality among critically ill patients during the COVID-19 pandemic [15]. The problem requires multiple approaches to find a solution, including prevention, diagnosis, and treatment. In addition, new drugs or treatment protocols are necessary to overcome drug resistance in fungi. As an antifungal agent and an immunoadjuvant, all-trans retinoic acid is a promising agent that could be used in combination with classic antifungal drugs, reducing their dose and side effects [16][17].
It is essential to understand the signaling processes in host-fungus interactions to pave the way for future clinical improvements, which will benefit the patient. Host-fungus interactions involve a plethora of mechanisms and evoke different explanations for Aspergillus invasion in the lung. This is important because lung epithelial cells respond diversely depending on the kind of insult or stress that is causing the injury [18]. The major view on this aspect indicates that conidia can bind and germinate on the surface of alveolar epithelial cells following active hyphal invasion (Figure 1) [19]. Despite the invasion, the morphology of epithelial cells seems to remain unaltered. Whether invasion requires the impairment of cell integrity is still a matter of debate, although there is sufficient evidence suggesting that epithelial invasion by hyphae can be achieved through actin remodeling in bronchial epithelial cells without disturbing morphology or epithelial integrity [20]. Thus, questions remain about the mechanisms responsible for this fungal cell invasion. 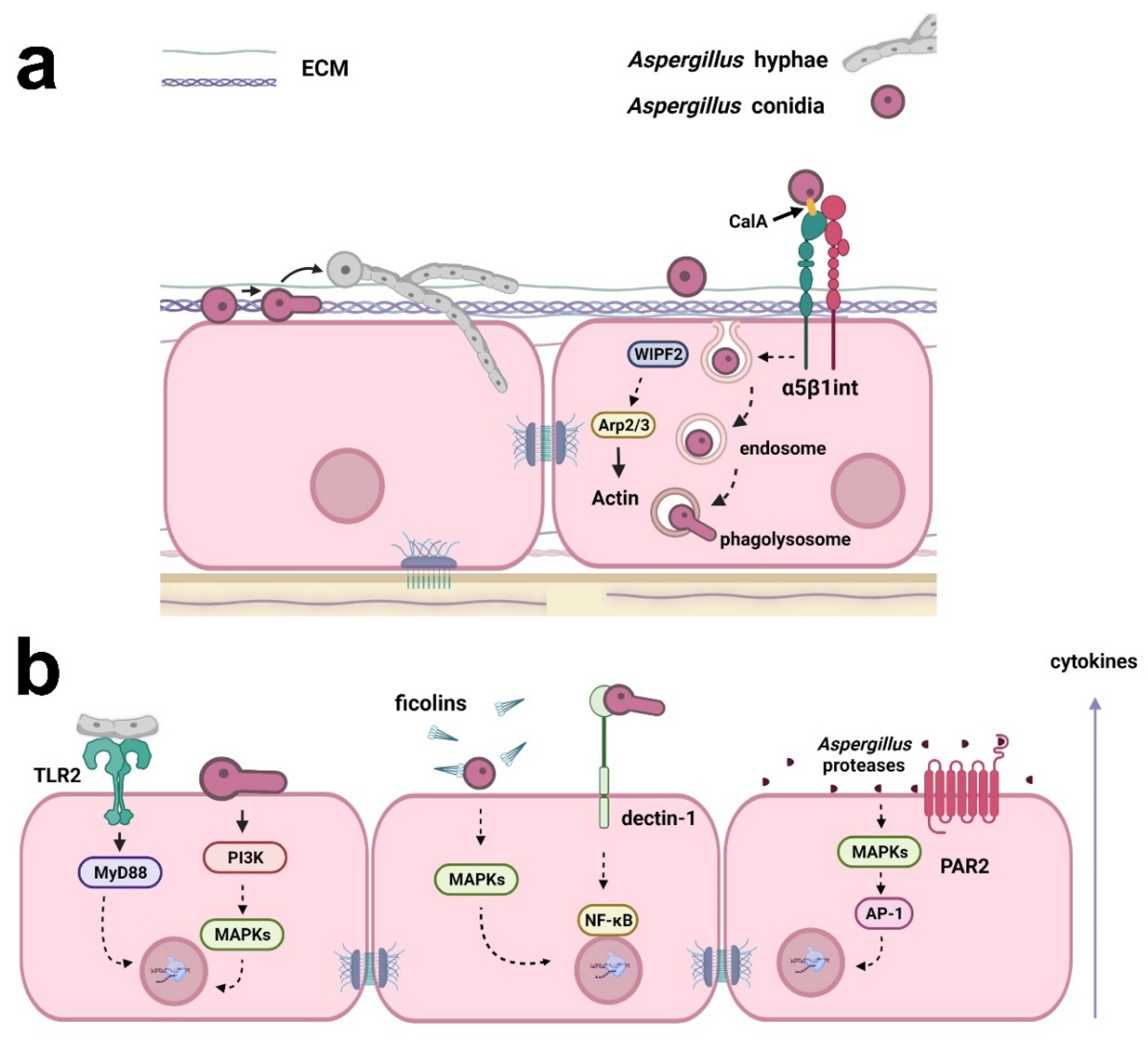 Figure 1. Examples of the responses of respiratory epithelial cells to Aspergillus infection. (a) Aspergillus conidia can bind to extracellular matrix (ECM) proteins and epithelial cell surface. Conidia may germinate on the surface of epithelial cells, and the resulting hyphae can actively invade the cells. Conidia internalization may occur through fungal CalA interaction with host α5β1 integrin and WIPF2, Arp2/3, and actin reorganization. Conidia can also be trafficked in the endosomal system and germinate in phagolysosomes, reentering the extracellular space. (b) Cytokine secretion by epithelial cells may be a result of (i) the interaction of Aspergillus hyphae with TLR2, activating MyD88; (ii) the activation of PI3K and MAPKs by germinating conidia; (iii) the opsonization of Aspergillus conidia by ficolins and MAPK activation; (iv) interaction with dectin-1 and the activation of NF-κB; and (v) activation of MAPKs and the transcription factor AP-1 by Aspergillus proteases. Aspergillus proteases can also activate PAR2, inducing cytokine production. Created with Biorender.com.

Paracoccidioidomycosis (PCM) is the most prevalent systemic mycosis in Latin America [21]. It is estimated that 80% of confirmed PCM cases occur in Brazil [22], but until 2020, this mycosis was not considered a mandatory notifiable disease in this country; thus, the true number of individuals affected by PCM is not known. An increase in PCM microepidemics has also been reported in different regions of Brazil. Environmental factors resulting from the opening of new agricultural frontiers through forest clearing may contribute to the current epidemiological situation of this mycosis [23]. Other activities that disturb the soil, such as the construction of highways, as seen in the state of Rio de Janeiro, Brazil [24], can also cause PCM outbreaks. Clusters of this mycosis may also be associated with climate events, such as El Niño, which provide optimal conditions for fungal growth, enhancing human exposure [25]. PCM has a social impact on areas where this disease is endemic because it frequently affects poor rural workers. PCM impacts these individuals by the chronicity of the disease, the long duration of treatment, and sequelae that lead to low quality of life and inability to work [26].
The etiologic agent of PCM is the thermally dimorphic fungus Paracoccidioides, which comprises the species P. lutzii and P. brasiliensis [27][28]. While P. lutzii mostly occurs in the midwestern and northern regions of Brazil and Ecuador, P. brasiliensis is endemic in all Brazilian regions, Argentina, Paraguay, Uruguay, Peru, Colombia, and Venezuela [22][29]. Recently, by analyzing nuclear and mitochondrial genes, Turissini et al. [30] proposed three new species attributed to the cryptic species of P. brasiliensis PS2, PS3, and PS4 as, respectively, P. americana, P. restrepiensis, and P. venezuelensis [30][31][32].
It is accepted that infection by Paracoccidioides occurs after the inhalation of fungal propagules (mycelium), which are usually present in the soil in rural areas. Once in the host lungs, the mycelium differentiates into yeast. Yeasts may remain in a latent state or trigger the disease [21][31]. The development of PCM is dependent on some characteristics of the host, such as sex, age, and immunological competence, in addition to factors related to the fungus, such as virulence and the ability to modulate the host’s immune system [21]. Some of these characteristics may act as a host protection factor, such as the presence of the female hormone 17-β estradiol, which inhibits the synthesis of proteins involved in the morphological transition from mycelium to yeast, a crucial process for the establishment of the infection, which would explain the prevalence of cases in male patients, even if both sexes are exposed to the same risk factors [33][34][35].
Recently, Almeida et al. [36] demonstrated that α3 and α5 integrins, which are present on the surface of alveolar epithelial cells, participate in the adhesion of P. lutzii (Pb01 isolate) (Figure 2). In a previous study, the same group verified that the other species of Paracoccidioides, P. brasiliensis (Pb18 isolate), promoted an increase in the levels of these integrins in the alveolar epithelial cell line A549 during the first 5 h of infection, but after 24 h, surprisingly, a decrease of α3 integrin levels was observed, which was dependent on direct contact between fungi and epithelial cells [37], indicating that Paracoccidioides can manipulate host cell receptor levels along with the infection. 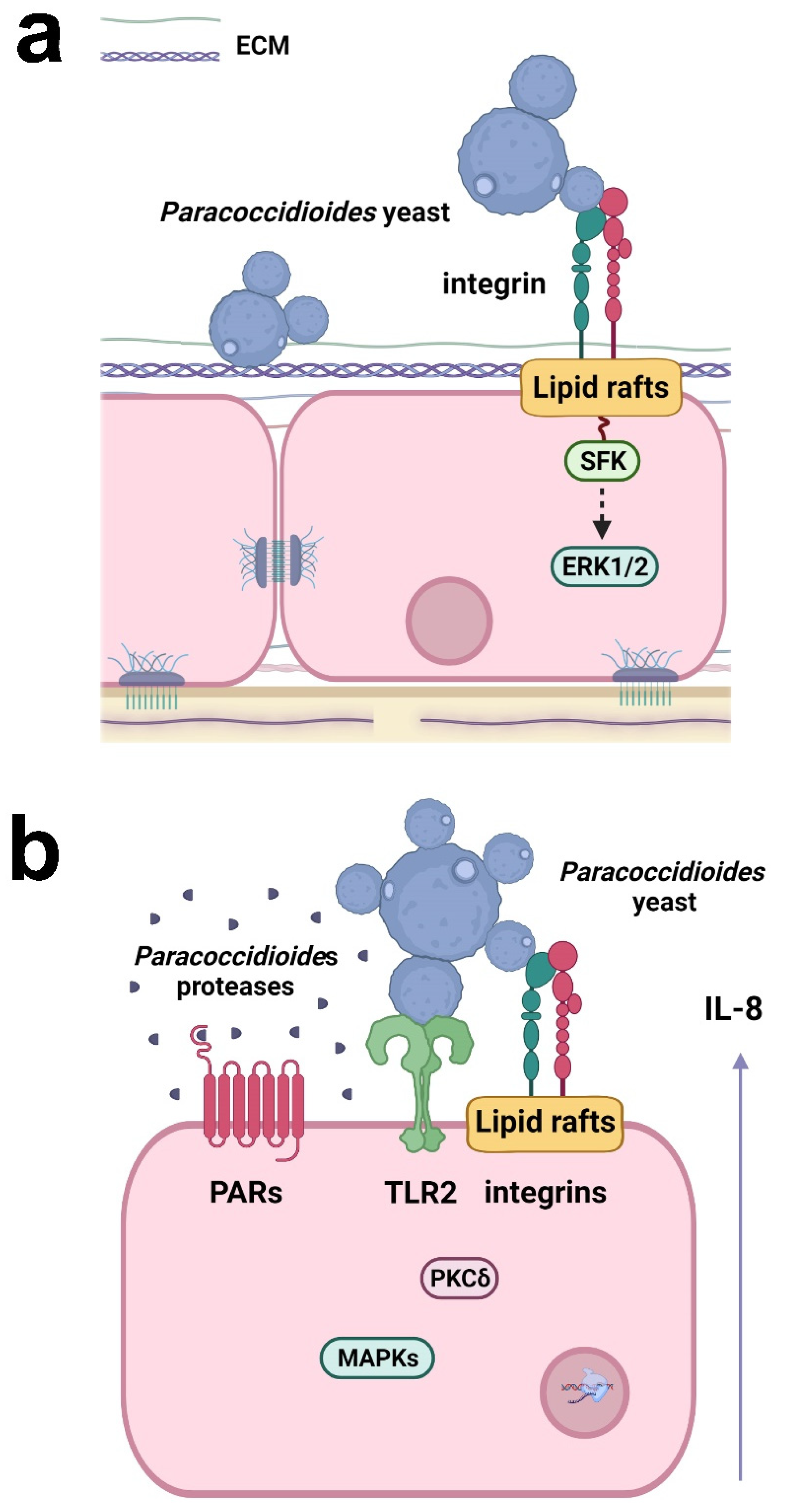