+1 point
Thank you for your contribution! You can also upload a video entry related to this topic through the link below: https://encyclopedia.pub/user/video_add?id=22972
Check Note
2000/2000
Relationship between D-Amino Acids and Schizophrenia

D-amino acids may play key roles for specific physiological functions in different organs including the brain. Importantly, D-amino acids have been detected in several neurological disorders such as schizophrenia, amyotrophic lateral sclerosis, and age-related disorders, reflecting the disease conditions. Relationships between D-amino acids and neurophysiology may involve the significant contribution of D-Serine or D-Aspartate to the synaptic function, including neurotransmission and synaptic plasticity. Gut-microbiota could play important roles in the brain-function, since bacteria in the gut provide a significant contribution to the host pool of D-amino acids. In addition, the alteration of the composition of the gut microbiota might lead to schizophrenia. Furthermore, D-amino acids are known as a physiologically active substance, constituting useful biomarkers of several brain disorders including schizophrenia.

Racemization of L-amino acids reacted by several racemases could lead to the synthesis of D-amino acids. Amino acids are usually found in these two forms in nature, with the exception of glycine, which has no chiral center. The amino acid racemases have been broadly identified in humans, mice, invertebrate animals, and bacterial species [1]. In humans, D-amino acid studies have recognized the relative abundance of D-amino acids in the brain as much as in several body fluids together with blood plasma, urine, and/or cerebrospinal fluid (CSF) [2][3]. Furthermore, D-Serine has been suggested as a possible biomarker for Alzheimer’s disease [3]. Additionally, several D-amino acids are detected in lactic fermentation foods [4]. Consistently, various studies have also revealed the presence of D-amino acids within several types of fermented foods and drinks [5]. It has been indicated that some D-amino acids within vinegar are commonly produced from lactic acid bacteria [4][6]. Furthermore, D-amino acids including D-Tryptophan, D-Phenylalanine, D-Serine, and/or D-Alanine seem to have a sense of taste that is syrupier than sugar [6][7]. In general, a lot of D-amino acids may taste sweet when compared to the corresponding L-amino acids [7]. Food processing such as alkali treatment and/or long period heating is a well-known procedure to provide the racemization of L-amino acids [8]. The main quantity of D-amino acids in a body may usually result from the food intake and/or gut microbial synthesis [8][9]. Hence, gut microbiota could be important contributors to the production of systemic D-amino acids [9]. In the gut microbiota, D-amino acid production occurs via intrinsic amino acid racemases of the specific bacteria [10]. Among them, broad-spectrum amino acid racemases have been detected within certain gram-negative bacteria [11]. These racemases might have an impact on the microbial ecology [11]. Physiologically, D-amino acids have been suggested to control cell wall biogenesis, biofilm degradation, and/or spore germination in the microbiota [12][13].

The N-methyl-D-aspartate (NMDA)-type glutamate receptor is involved in the synaptic function of neurons. D-amino acids are agonists or co-agonists of the NMDA receptor, which is therefore crucial in synaptic plasticity [14][15]. Activating the NMDA receptor by D-amino acids might be essential for the positive sensitization of neuron, suggesting a key role for calcium ion-influx via the NMDA receptor for synaptic plasticity. In this regard, recognized functions of D-amino acids might embrace neurotransmission, synaptic plasticity, learning, and memory through modulating the NMDA receptors in the brain [16][17]. In fact, both D-Serine and D-Aspartate are involved in several processes underlying the NMDA receptor activation and neurotransmission in the CNS [18][19]. Furthermore, the absence of D-Serine is one of the mechanisms underlying the decrease of long-term potentiation and cognition [19]. D-amino acids exist predominantly in the frontal areas of the brain [20][21]. High amounts of D-Serine are also identified in the hippocampus and hypothalamus [21][22]. D-Serine may function as activating the NMDA receptor at the glycine binding site and may play a critical role in synaptic plasticity [23] (Figure 1). Consistent with this, several studies have revealed that D-Serine is an endogenous ligand for the NMDA receptor and is crucial in human neurophysiology, which might serve as a basis for pharmacological applications in D-Serine therapy [24]. In general, the metabolism of D-Serine is determined by the activity of racemases and/or D-amino acids oxidase (DAO). In mammals, the DAO is predominantly expressed in the CNS and/or in the cytosol of neurons [25], which is responsible for the metabolism of D-Serine, and has been implicated in the pathogenesis of neuropsychiatric diseases [25][26]. Similarly, it has been suggested that the DAO is involved in the regulation of neurotransmission in the CNS [26]. Serine racemase deficiency may induce a disturbed NMDA receptor related to synaptic neuroplasticity [27]. Therefore, a deleted or decreased Serine-racemase expression may also be associated with cognitive disorders such as schizophrenia, indicating that D-Serine is intensely linked to memory and/or learning developments [28][29]. In addition, D-Serine depletion decreases the development of long-term potentiation (LTP) depending on the NMDA receptors, which is involved in the creation of memory [30]. Consistent with this, increased D-Serine levels may improve recognition and/or memory in rodents [31]. Accordingly, D-Serine creation might be a possible target to neutralize several brain disorders such as schizophrenia. D-Aspartate also seems to play an indispensable role in the neurotransmission system [32], and it is present in broad regions of the brain including the prefrontal cortex and/or hippocampus [33]. D-Aspartate has a considerable affinity at the L-Glutamate binding spot on the NMDA receptor [34] (Figure 1). D-Aspartate may increase during the development of the nervous system; however, the concentration of D-Aspartate radically decreases to a trace level by gestational week 41 and then continues at a very low level during the postnatal stages [35]. Degradation of D-Aspartate takes place via the D-aspartate oxidase (DDO) instead of the DAO (Figure 1), and the DDO is widely expressed in the brain [36]. Accordingly, the DDO is also considered an attractive therapeutic target [36]. D-Aspartate as well as D-Serine have been revealed to be involved in learning and/or memory [5][37]. 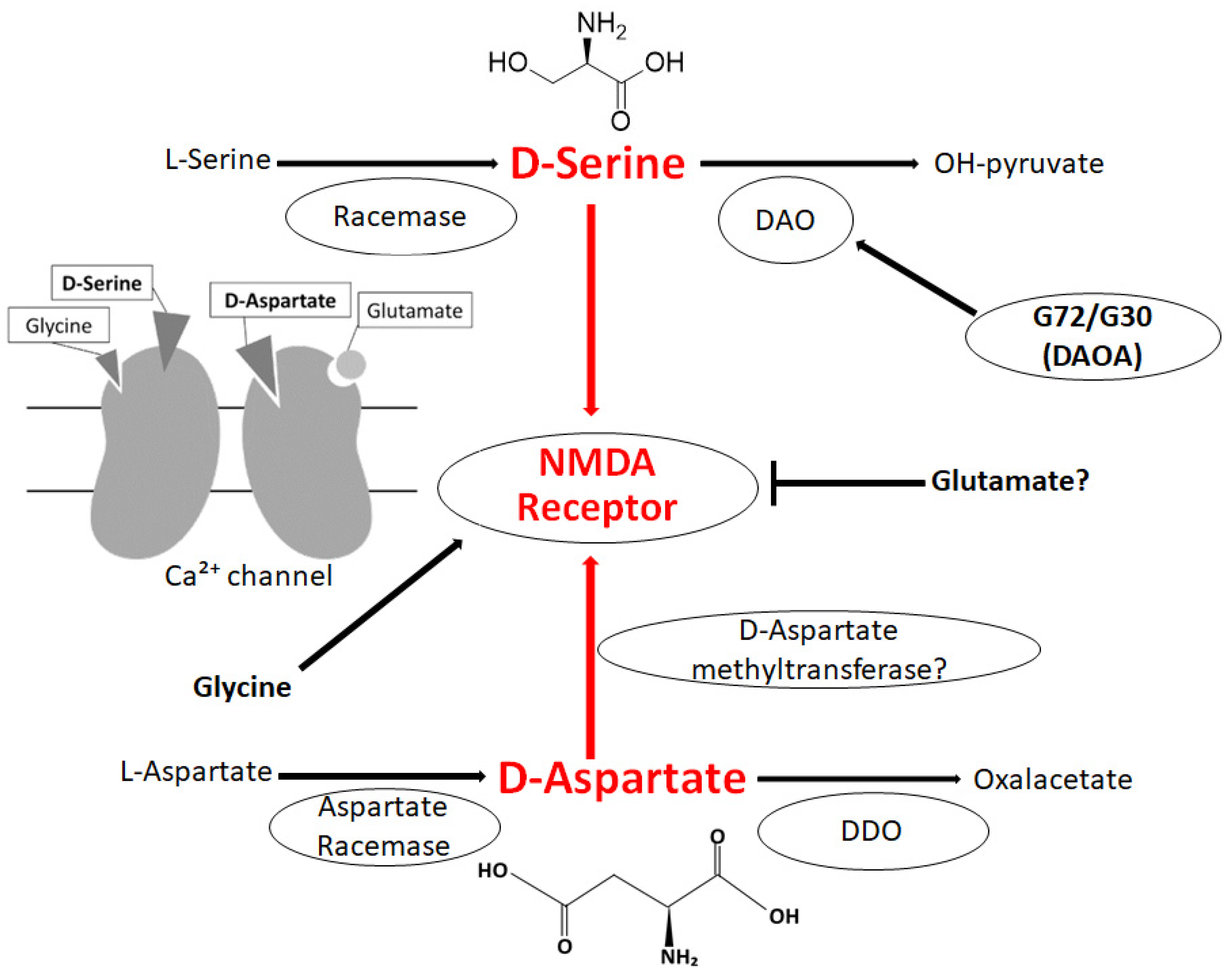 Figure 1. Illustration of the general D-Serine or D-Aspartate metabolic pathway in bacteria and/or in mammals. D-Amino acid oxidase (DAO) catalyzes the oxidative deamination of D-Serine. The DAO activator G72/G30 could stimulate the DAO. Both D-Serine and D-Aspartate are involved in NMDA receptor signaling in the neuron. The arrowhead means stimulation and/or augmentation, whereas the hammerhead represents inhibition. As a footnote, some serious events have been omitted for simplicity. DDO: D-Aspartate oxidase; DAOA: DAO activator; NMDA: N-methyl-D-aspartate.

3. Relationship between D-Amino Acids and Schizophrenia

Schizophrenia is a chronic neuropsychiatric disorder with abundant mortality, characterized by dissociations of ideas, identity, and emotions [38]. The underlying comprehensive causal mechanisms for schizophrenia remain unknown at present. Its clinical phenotype could be subdivided into positive symptoms such as hallucinations or delusions, and negative symptoms such as social withdrawal or impaired motivation, and/or those of cognitive impairment, which might result from the dysregulated neural network pathway in CNS [39]. The pathology of the disease appears to include complicated molecular abnormalities in the CNS. Hence, developmental dysfunction owing to the environmental and/or genetic factors in neurons might play a crucial role in the pathogenesis of schizophrenia [40]. Schizophrenia affects more than 20 million people worldwide [41]. Understanding the further molecular pathology of schizophrenia may lead to a superior diagnosis and/or treatment.
Antagonists of NMDA receptors might aggravate patient symptoms with schizophrenia [42]. Since NMDA receptors’ hypofunction could also cause psychosis in humans, a better understanding of the NMDA receptors signaling mechanism may lead to a superior pharmacotherapy in schizophrenia [42]. Similarly, changed expressions of NMDA receptors involved in the metabolism of glutamate have been found in patients with schizophrenia [43]. Disturbances in the NMDA receptor-mediated synaptic transmission seem to be important factors. It has been reported that D-Serine and D-Aspartate are thought to play a role in NMDA-related synaptic plasticity with a potential involvement in schizophrenia [44]. In addition, D-Aspartate is noticed as being condensed in the synaptic vesicles of the axon-terminus in the developing brain, which suggests that its function is as a critical neurotransmitter in the growth of the CNS [45]. Furthermore, the NMDA receptor agonists may enhance anti-schizophrenic effects [46]. It has been shown that glutamatergic agents improve the negative symptoms of schizophrenia [46]. Consequently, DAO and serine racemase might be key enzymes for the association between D-amino acids and schizophrenia [47]. In fact, DAO-related genetic alterations have been related to the development of schizophrenia, and DAO inactivation produces behavioral effects with potential therapeutic benefits [48]. Consistently, the DAO gene has been shown to be a susceptibility gene for schizophrenia and its neurocognitive deficits, suggesting that DAO inactivation could result in showing anti-schizophrenic effects [47]. In addition, the stimulation of the DAO enzyme has shown enhanced symptoms in rodent models with schizophrenia, and an increased DAO activity seems most likely to impact the D-Serine metabolism [49]. Several studies have shown increased mRNA, protein, and/or enzymatic activity of DAO in post-mortem brain samples with schizophrenia [50]. A transcript of DAO has been detected in higher quantities in the schizophrenia-cerebellum [50]. Decreased D-Serine and/or the downregulation of NMDA receptors have resulted in a compromised synaptic plasticity, indicating a relation with the development of schizophrenia and deficits in learning and memory [51]. Decreased levels of D-Aspartate are also found in the brains of schizophrenic patients [52]. Remarkably, with schizophrenia, there has been a significant increase in D-Serine levels along with an improvement in clinical symptoms [53], which may be an effective antipsychotic treatment. Sodium benzoate, a DAO inhibitor, has also improved several symptoms in chronic schizophrenia patients [54]. Additionally, serine racemase knockout mice have shown an attenuation of seizure when compared with wild-type control mice, suggesting that serine racemase might be a target for the development of epileptic seizures’ therapeutic strategies [55]. A changed D-amino acid breakdown has also been associated with motor neuron degeneration as well as with schizophrenia. For example, decreased DAO is involved in motor neuron degeneration during senescence [55][56].

More
© Text is available under the terms and conditions of the Creative Commons Attribution (CC BY) license; additional terms may apply. By using this site, you agree to the Terms and Conditions and Privacy Policy.
Upload a video for this entry
Information
Subjects: Biochemistry & Molecular Biology
Contributor MDPI registered users' name will be linked to their SciProfiles pages. To register with us, please refer to https://encyclopedia.pub/register :
Satoru Matsuda
View Times: 208
Entry Collection: Neurodegeneration
Revisions: 2 times (View History)
Update Date: 17 May 2022
Table of Contents
1000/1000
Hot Most Recent