+1 point
Thank you for your contribution! You can also upload a video entry related to this topic through the link below: https://encyclopedia.pub/user/video_add?id=22453
Check Note
2000/2000
Experimental Models for Neonatal Hypoxic-Ischemic Encephalopathy

Representing an important cause of long–term disability, term neonatal hypoxic-ischemic encephalopathy (HIE) urgently needs further research aimed at repurposing existing drug as well as developing new therapeutics. Since various experimental in vitro and in vivo models of HIE have been developed with distinct characteristics, it becomes important to select the appropriate preclinical screening cascade for testing the efficacy of novel pharmacological treatments.

Perinatal hypoxic–ischemic encephalopathy (HIE), which affects 2–4/1000 full term births, is a major cause of acute mortality and chronic neurological morbidity [1], being frequently associated with neurocognitive impairment, cerebral palsy, and seizure disorders [2]. Although therapeutic hypothermia is becoming standard clinical care for moderate to severe neonatal encephalopathy, it is only partially effective, with almost 50% of treated infants having adverse outcomes [3]. Current hypothermia protocols have consistently involved starting treatment within the first 6 h of life, with systemic cooling to either 34.5 ± 0.5 °C for head cooling or 33.5 ± 0.5 °C for whole-body cooling, and continuing treatment for 48–72 h [4]. However, many newborns with encephalopathy have been exposed to hypoxia and/or ischemia well before birth, with a consequent delay of hypothermia delivery before clinical diagnosis. Novel therapeutic strategies capable of augmenting neuroprotection and/or neurodegeneration in combination with therapeutic hypothermia are highly needed to reduce the neurological consequences of HIE [1].
Hypoxia–ischemia of sufficient severity to deplete cerebral energy reserves activates multiple pathways leading to ongoing cell death, including excitotoxicity, oxidative stress, and mitochondrial stress, apoptosis, and microglial activation [5]. Many substances possessing antioxidative properties show the ability to protect the neonatal brain from hypoxia–ischemia in experimental models [6], such as N-acetylcysteine [7] and mitochondria-targeted antioxidants [8]. Even though there is a partial restoration of cerebral energy stores in the early period of reperfusion, in both asphyxiated infants and pre-clinical animal models, a secondary energy failure occurs during the subsequent hours to days [9]. Clinically, the severity of the second energy failure as determined with 31P-MRS has been shown to correlate with adverse neurological outcomes at 1 and 4 years of follow-up [10][11]. The tertiary phase can last for months/years and result in developmental disturbances and has been associated with chronic neuroinflammation, loss of trophic support, and impaired connectivity and maturation [12], thus suggesting a therapeutic window of intervention up to several days after the insult.
Although it is important for an experimental drug for HIE to be thoroughly evaluated for its mechanism of action and neuroprotective efficacy in in vitro cell-based and organotypic models mimicking hypoxic–ischemic/excitotoxic conditions, the use of pre-clinical animal models continues to be essential for supporting full development. Commonly, experimental models for the study of neonatal encephalopathy in term infants involve induction of hypoxic–ischemic or focal ischemic lesions in various species, including rodents and piglets [9]. Such pre-clinical models were instrumental for demonstrating that mild, induced hypothermia can improve neurological recovery after global moderate to severe hypoxia–ischemia [13]. Since therapeutic hypothermia has become a standard of care therapy for neonatal encephalopathy, translational preclinical testing of therapeutic agents should occur also in comparison as well as in combination with therapeutic hypothermia [14], and therapeutic interventions must be initiated after the completion of the insult to better mimic the clinical condition [15].

2. In Vitro Models of HIE in Italy

Experimental models of hypoxia–ischemia in vitro can be used to mimic neonate HIE but also focal or global transient ischemia in adults. There are no particular experimental details in these models that can be recognized as specifically designed or useful for understanding mechanisms or developing new therapies for neonate HIE in humans, except perhaps when selecting tissue from newborn pups or when the effects of drugs are evaluated in combination with hypothermia.
If the researchers bear this in mind, they can recognize various groups in Italy that use in vitro models of hypoxia–ischemia. For example, Marina Pizzi and coworkers in Brescia have performed a number of studies investigating the neuroprotective effects of diverse compounds in primary neuronal cultures exposed to OGD as a model of stroke [16][17]. The same model has also been used by the group of Lucio Annunziato in Naples to explore the role of Na+/Ca2+ exchangers in cerebral ischemia but also the mechanisms of ischemic preconditioning [18]. Finally, the vulnerability to OGD of primary neuronal cultures derived from Tg2576 Alzheimer mice has been recently examined in the laboratory of Laura Calzà in Bologna [19]. To the researchers' knowledge, their laboratory in Florence is the only one in Italy that has used, since 1999, mixed astrocyte–neuronal cultures as a model not only of cerebral ischemia [20], but also of apoptotic and necrotic neuronal death induced by mild or intense NMDA exposure [21][22][23] and of senescence [24].
The group in Naples has considerable experience also with the use of organotypic hippocampal slices exposed to OGD, which have been used in their laboratory to study the neuroprotective effects of the anticonvulsants retigabine and flupirtine [25] and of NCX1 (an Na+/Ca2+ exchanger) overexpression [26]. This model has been repeatedly used also by the researchers' group in Florence essentially for the same purposes as mixed cortical cultures [27][28], but similarly to the strategy of the laboratory of Walter Balduini in Urbino [29], the researchers have specifically used organotypic hippocampal slices exposed to OGD as a first step in the identification of candidate drugs to be used in more complex models of HIE and in infants with HIE in clinical trials [30].

3. In Vivo Models of HIE in Italy

A few of the laboratories in Italy that the researchers have already mentioned have occasionally used the Rice–Vannucci HIE rat pup model to explore the neuroprotective effects of selected drugs [31] or in search of potential biomarkers for neuroinflammation and neurodegeneration [32]. However, as mentioned in the previous paragraph, the researchers laboratory in Florence and the group in Urbino have designed studies that include both experiments with organotypic hippocampal slices exposed to OGD and parallel, or subsequent experiments performed using the Rice–Vannucci model of HIE with the specific aim of characterizing new drugs to be used in clinical trials. Whereas in the researchers' laboratory they concentrated on memantine and topiramate as described in a previous paper [30], Balduini and co-workers have examined in this in vivo model the potential of various drugs, such as simvastatin [33] and, most importantly, melatonin [34], which is now been tested in an Italian study protocol for a randomized-controlled trial [35].

The preclinical studies that the researchers have described in the previous sections have substantially led to two separate clinical trials performed in Italy with Italian Hospital Centers. The first one is the already-mentioned phase II NeoNATI clinical trial with topiramate plus hypothermia directed by the Neonatal Intensive Care Unit of the Children’s Hospitals in Florence and Pisa, which has been completed with encouraging results [36]. The second trial (MELPRO), with melatonin, is a randomized double blind, placebo-controlled trial on 100 neonates with moderate to moderately to severe hypoxic ischemic encephalopathy, which is coordinated by the University Hospital of Ferrara, involves the participation of other five Italian Centers, and is estimated to be completed by December 2022.

The use of a precise, carefully selected screening cascade of preclinical experimental in vitro and in vivo models can help to improve strategies and develop therapies to protect babies with moderate to severe encephalopathy (Figure 1). 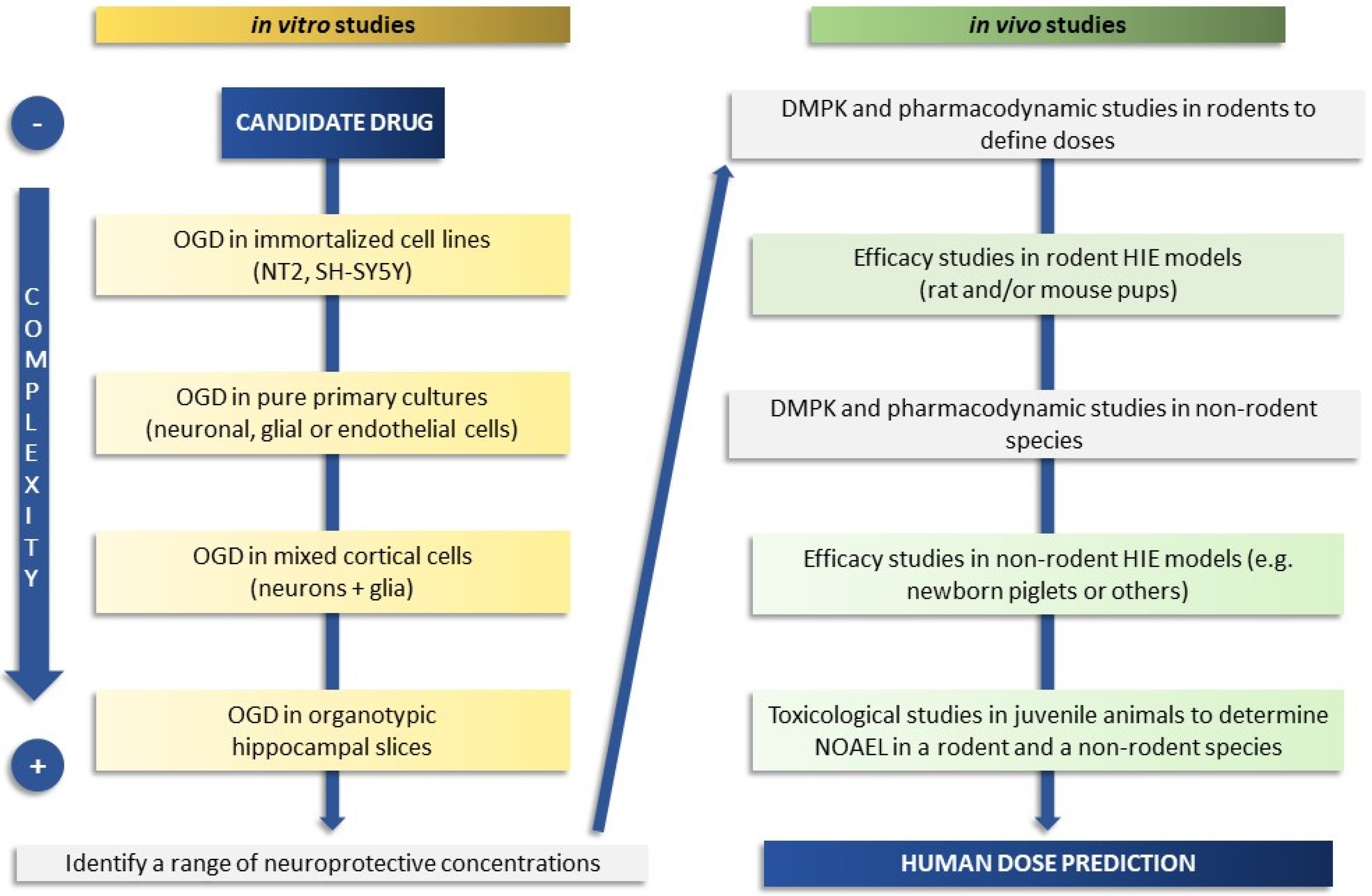 Figure 1. Schematic flow chart of a screening cascade to prove the efficacy of a candidate drug in neonatal HIE. On the left side is depicted a representative test cascade for evaluating the efficacy in in vitro models of increasing complexity (from cell-based to organotypic models) with the aim of defining a range of neuroprotective drug concentrations. Typically, a battery of additional in vitro tests is also used for measurement or prediction of physical properties, drug metabolism, and pharmacokinetic parameters (not fully covered here). Drug metabolism and pharmacokinetic (DMPK) studies, used to understand drug exposure and brain penetration and to define doses, are conducted before progressing to in vivo efficacy studies, shown on the right side. Pharmacodynamic in vivo studies may be required, depending on the mode of action of the candidate drug, before proceeding to efficacy studies. Selected candidate drugs are progressed to studies in rodents (better if two species or different strains and laboratories if using one species such as rat), and subsequently to higher species if feasible, to determine efficacy and the link between target inhibition and neuroprotection. Safety studies in juvenile animals and the determination of the No Observed Adverse Effect Level (NOAEL) in at least two species (rodents and non-rodents) are also required before a candidate drug can be progressed to human studies and the human dose predicted.
Although cell-based and organotypic models coupled with drug metabolism and pharmacokinetic studies can guide the screening and selection of neuroprotective drugs, in vivo model testing is required to prove efficacy. Nevertheless, there is no single animal model that can fully recapitulate the complexity of HIE in neonates (Table 1).
Table 1. Strengths and limitations of the principal in vitro and in vivo models of neonatal HIE. BCAO: bilateral carotid artery occlusion, DIV: days in vitro, E: embryonal day, ICU: intensive care unit, MCAO: monolateral carotid artery occlusion, OGD: oxygen–glucose deprivation, P: post-natal day, PK: pharmacokinetics, UCO: umbilical cord occlusion.
Rodents model are the most cost-effective models in a drug discovery setting, offering also genetic homogeneity. Large animals, such as piglets, are important not only to further evaluate therapeutic efficacy in gyrencephalic brains, but also for more accurate studies on pharmacokinetics and initial safety pharmacology. Regardless of the model utilized, neuroprotective treatments should be initiated after the completion of the insult to simulate a therapeutic intervention. Given the intrinsic variability of the HIE models and the methodological differences between laboratories, an accurate quantification of the degree of neuroprotection of a given agent can result in variable outcomes. To mitigate this limitation, the NMDA antagonist memantine, in virtue of its known neuroprotective effects, could be used head-to-head with new therapeutics to benchmark efficacy in rodent models of HIE. In summary, a preclinical proof of concept of efficacy of an emerging therapeutic strategy should be obtained in at least two different HIE animal models by independent laboratories before initiating clinical trials.

More
© Text is available under the terms and conditions of the Creative Commons Attribution (CC BY) license; additional terms may apply. By using this site, you agree to the Terms and Conditions and Privacy Policy.
Upload a video for this entry
Information
Subjects: Neurosciences
Contributors MDPI registered users' name will be linked to their SciProfiles pages. To register with us, please refer to https://encyclopedia.pub/register :
Elisa Landucci
,
Domenico E. Pellegrini-Giampietro
,
Fabrizio Facchinetti
View Times: 133
Entry Collection: Neurodegeneration
Revisions: 3 times (View History)
Update Date: 05 May 2022
Table of Contents
1000/1000
Hot Most Recent